Non-binary fashion: Can more men get away with wearing what they like?

Everton football player Dominic Calvert-Lewin is developing a bit of a reputation for being fashion-forward.

Not long ago, the self-proclaimed ‘Sheffield lad’ posted a picture on his Instagram where he looked very dapper. In it, he sported a white suit,  Gucci loafers, and a Chanel handbag, something that’s usually regarded as a women’s accessory.

It seems that more celebrity men feel comfortable enough in their skin to try something a little different.

At the BET awards in July 2021, Lil Nas X was praised for wearing a stunning gown by designer Andrea Grossi. The blue and white skirt, jacket and corset was covered in illustrations.

Before that, Harry Styles made history as the first male cover star of US Vogue. In the shoot, he wore a blue Gucci gown with a black suit jacket.

Are we in the midst of a cultural shift for everyone? Or is this just a trend for a few, high-profile, progressive men?

‘There is a privilege that comes with being in the limelight and wearing clothing “designed for women”,’ he tells Metro.co.uk. ‘You get a “pass” or you’re seen as “daring” or making a “statement”.

‘A lot of these public figures are already idolised. To their fans and supporters they can’t do much wrong and so everything they do is seen as acceptable.’ 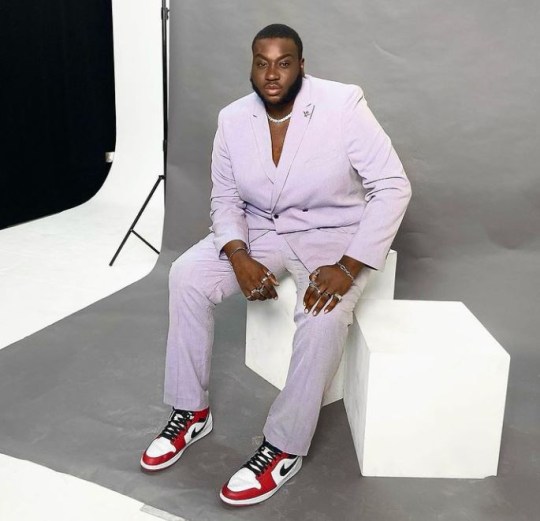 Though Calvert-Lewin has found vocal support – popular music group NSG praised the footballer’s outfit, commenting on a post about the photo: ‘Female bag but I’m still swagging it’  – all of these men have faced some backlash for their fashion choices.

Right-wing commentator Candace Owens was scathing in her criticism of Styles’ Vogue cover.

She tweeted: ‘There is no society that can survive without strong men. The East knows this. In the West, the steady feminization of our men at the same time as Marxism is being taught to our children is not a coincidence. It’s an outright attack.

Non-binary people, as well as less traditionally masculine men, are used to this type of stigma.

Jack Oliver, a non-binary makeup artist who appeared in BBC Three series Glow Up, tells us: ‘Fashion filters down from queer cultures, but people will not shy from verbally attacking you over how you look in a piece of fabric.

‘To this day I still have comments on what I look like and I’m truly just living my life.’ 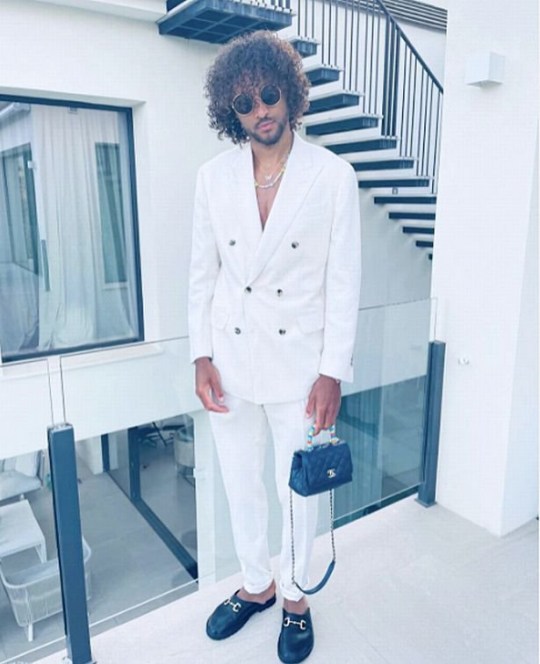 Multidisciplinary artist Jacob V Joyce adds that they feel it’s a shame we are still having these discussions in 2021.

They explained: ‘It’s sad that people are so trapped in the gender binary that they’d waste time talking about other people’s accessories. Especially when the government is defunding so many services that tackle gende- based violence.’

When celebrity women in the past challenged dress code norms, they also faced backlash, according to Professor Joanne Eicher, an author who taught at the University of Minnesota’s College of Design.

‘There was quite a fashion furore when women in the 20th century began to wear trousers and were not allowed entrance to some restaurants and hotels. There was Marlene Dietrich in the 30s. Katherine Hepburn couldn’t wear trousers in Claridge’s lobby in the 50s, and I believe, and used the staff entrance,’ she explains.

‘It’s complicated because over time, items like jeans and T-shirts have become unisex and non-binary, but some items like a purse, or some jewellery types like earrings, seem female.’ 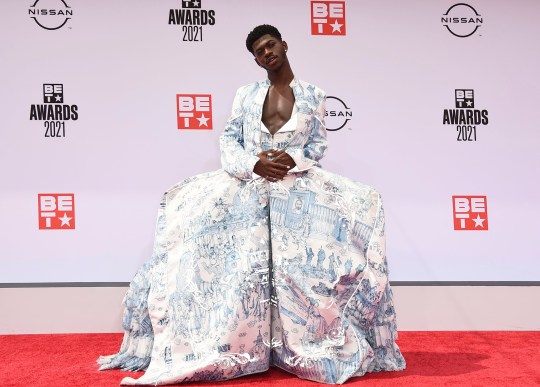 Will we see the disappearance of gendering fashion? (Picture: Jordan Strauss/Invision/AP Source: Invision)

In years to come, will men wear dresses, skirts and handbags in the same way that many women now wear trousers and T-shirts (in certain Western contexts), without being challenged, questioned or noticed?

Fadd is unsure: ‘I think for the majority of men the backlash received definitely discourages them from expressing themselves through fashion. We live in a society where approval and acceptance by the majority is ranked higher than individuality.

‘Most guys would see it as “if I express myself in this way, automatically I’m inviting a level of disrespect” and respect is everything to today’s man.’

Eicher considers that we might be in the midst of gradual change.

‘Maybe we are in transition for more choices,’ she explains. ‘In the past, some people have said skirts and dresses are more comfortable than trousers because they are less restricting.

‘Of course, there are kilts. Certainly Scotsmen have always, I believe, been thought “manly”. And cross-culturally, African males have worn wrapped garments, both those wrapped from the waist and toga-style as in Ghana, like Nkrumah. Historically, Roman males wore togas.’

Though he acknowledges that pressures still exist for ordinary people who can’t rely on acceptance from fans, Fadd agrees that there is a cultural shift.

‘We are definitely in a genderless fashion era. Flares and crop tops are being discussed more when it comes to men’s fashion. I can definitely say we are taking steps to a more inclusive industry.’

Etcetera Etcetera, a non-binary artist who appeared on the first season of Ru Paul’s Drag Race Down Under sees what is happening as more than a moment or a fad. For them, it’s a question of freedom and liberation.

‘Trans and gender nonconforming people throughout history have always shifted societal boundaries and cultural expectations – at their own expense and threat to their safety,’ they share.

‘For trans and non-binary people, it’s not a fashion statement or an attempt to be on trend – but instead a need to chase gender euphoria and create unique subcultures to survive and thrive outside of the conventional norm – especially trans people of colour and trans sex workers.

‘The toxic conversations that exist around gender impact not only trans and non-binary people – but everyone.’

Regina King. Richard Shotwell/Invision/AP/ShutterstockGet her glow! Regina King shut down the red carpet at the Academy Museum of Motion Pictures...

Best Looks of All Time