Sprouts are in season and they can be utterly delicious (Picture: Louise Ha/Jay Morjaria)

Let’s be honest, Brussels sprouts get a lot of stick.

The festive staple is perhaps one of the least sought-after sides around the Christmas dinner table.

Reports last month blamed Gen Z for the vegetable’s downfall – with a study saying that nearly one in four people aged 18-24 admit they hate the green vegetable.

Now, there’s no denying that boiled Brussels sprouts can be pretty bland – but, as with any vegetable, there’s more than one way to cook them.

Brussels sprouts are in season at the moment, so there’s never been a better time to get experimental, in an attempt to fall back in love with the unpopular vegetable – before the big day rolls around.

Not to mention sprouts are high in nutrients and rich in antioxidants – so there’s every more reason to give them a second chance.

Thankfully, there are some incredible sprout recipes which reinvent the festive staple as we typically know it.

We’ve rounded up three alternative sprout recipes from top chefs and foodies, so you can be rest-assured they will taste pretty great. 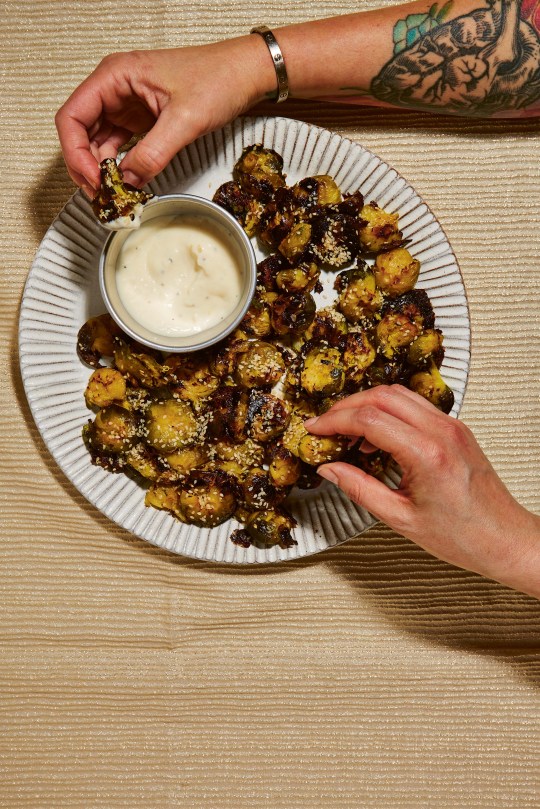 This recipe is from plant-based chef Bettina Campolucci Bordi, who says: ‘This is the only way to eat Brussels sprouts: crispy on the outside and nice and soft on the inside with extra crunch from the sesame seed addition.

‘I am not a huge sprout lover, but I am a massive fan of these, especially dolloped with a bit of mayo. You must make them.’

For the garlic mayonnaise:

2. Peel the outer layer of the sprouts and give them a good wash. Bring a large saucepan of salted water to the boil, add the sprouts and parboil for 10 minutes until semi-soft. Careful the sprouts don’t turn a dull green which means they have been overcooked. Drain well.

3. Line a large baking tray (pan) with baking parchment, then spread the Brussels sprouts over the parchment. Make sure the sprouts have enough space in between and flatten them with the palm of your hand or the bottom of a drinking glass until they are as flat as possible. You might find that some water comes out of the sprouts when you flatten them, so soak up any excess water with a paper towel.

4. Drizzle the sprouts with olive oil and a generous sprinkling of salt and sesame seeds, then pop in the oven for 10–15 minutes until brown.

5. Remove the tray from the oven, turn the sprouts, sprinkle with more sesame seeds and pop back in the oven for a further 10 minutes. You want the sprouts to be golden and crispy.

6. While the sprouts are cooking, mix all the ingredients for the mayonnaise together in a bowl and set aside.

7. Once the sprouts are golden, remove from the oven and eat immediately while they are super crispy, dipping them in the garlic mayo. 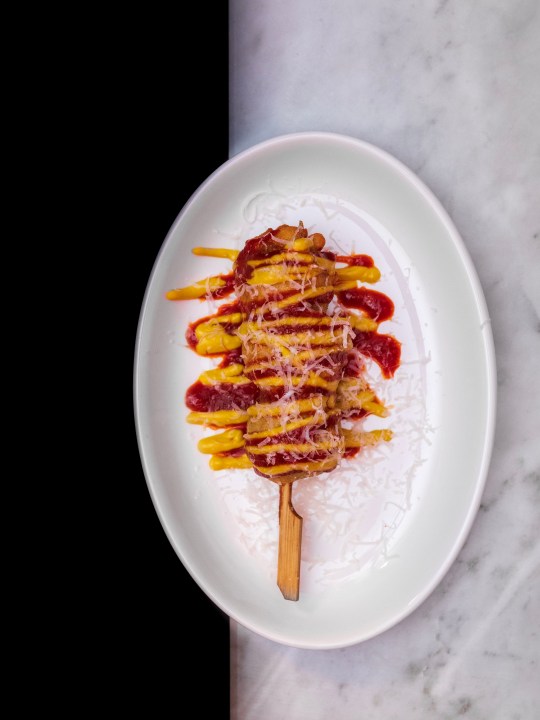 This recipe is from Jay Morjaria – who served it at Taste of London’s pop-up sprout bar. His recipe makes 12-14 sticks.

For the corndog batter

For the Gochujang ketchup

1. Mix the batter ingredients in a bowl, using a whisk.

2. Make the ketchup by mixing and reducing the ingredients by 30% over a medium heat. Cool and set aside.

3. Blanch the Brussels sprouts – enough for three per stick. Then add them onto skewers.

4. Dip each stick into the batter and deep fry in hot oil for 3 minutes.

5. Drizzle on the ketchup and French’s American mustard and grate over parmesan cheese.

This recipe comes from TikTok user @dishingitwithamanda – but you’ll need an air fryer to give it a go.

1. Microwave the Brussels sprouts for 4-6 minutes, until tender.

2. Mix a glaze with the balsamic, mustard, chopped garlic, olive oil and salt and pepper – make it to your own taste.

4. Then place in an air fryer and spoon on some of the glaze. Fry for 8-10 minus – remembering to flip halfway and add more glaze.

5. Sprinkle with feta and serve.