Whether it’s jumping on a bike or cutting out single-use plastic, people are focusing on the small, individual ways they can help the planet (Picture: Metro.co.uk / Getty)

From the great Oat Milk Revolution to 2021 seeing the largest Veganuary participation yet, it’s clear we’re becoming more mindful about what we consume and how it impacts ourselves and the planet.

As climate change warnings become more frequent and less patient, the need to limit our carbon footprints is becoming a top priority.

Whether it’s jumping on a bike or cutting out single-use plastic, people are focusing on the small, individual ways they can help the planet.

For many, changing up their diet is the easiest and most impactful option, especially since food creates 20-30% of all global carbon emissions, with animal food consumption, particularly beef, contributing to higher emissions than plant foods (about 57% compared to 29%) and more than transportation globally.

But if you’re one of the 67% of people who would rather reduce their life expectancy by five to 10 years than give up meat – fear not.

A new environmentally-friendly diet is here, and it isn’t just about cutting out meat and dairy.

According to doctors working with Lifesum, following a climatarian diet can reduce your CO2 emissions by 1.5 tonnes annually.

Essentially, climatarianism is about paying more attention to the impact our food is having and eating in accordance to that.

While, yes, this does mean cutting down on carbon-intensive foods, such as beef, it’s also about eating seasonally and locally and looking at how our food is made.

It’s also important to take note of packaging that your food comes in in order to limit its overall footprint and to buy only what you need to avoid food waste.

Climatarianism is essentially a flexible approach to making your diet more carbon-friendly.

But tackling the climate crisis is about more than just skipping the dairy. Food supply chains and production processes are part of the issue.

The concept is being explored by eco-art activists Daniel Fernández Pascual and Alon Schwabe, also known as Cooking Sections.

The pair’s ongoing Climavore project looks at how not only our diet, but food supply chains and production processes are impacting the planet.

‘It is crucial that people make responsible choices as individuals, but more importantly, the supply chain in the UK has deteriorated to such an extent that we are disconnected from seasons and landscapes,’ they tell Metro.co.uk. ‘Big supermarkets have made food economically affordable, but at what human, nutritional or ecological cost?’

They add: ‘Policymakers and large food companies are eventually the ones indicating to farmers what to grow, how and when. So there needs to be systemic change to urgently address the biodiversity loss created by intensive farming.’

One way Climavore proposes to shift consumption is by looking at seasons.

‘If one goes to an average supermarket, there is pretty much any fruit or vegetable any time of the year: strawberries in winter, turnips in the summer, farmed salmon all year round,’ Fernández and Schwabe say. ‘Instead, Climavore questions how to follow new seasons that are emerging.

‘In a period of drought, Climavore proposes to shift food production and consumption to drought-resistant plants that require no irrigation or support farming of foods through microclimates that reduce the use of groundwater.

‘In a period of polluted oceans by salmon farms, Climavore proposes to shift to seaweeds and bivalves that filter water as they grow and enhance coastal habitats.

‘In a period of exhausted soil, Climavore promotes polyculture of grains, beans, lentils, peas and chickpeas grown together or in rotational systems without chemicals.’ 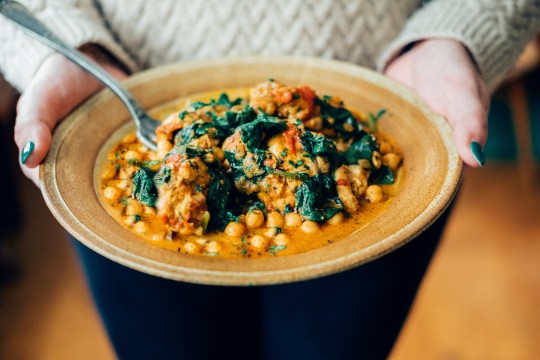 Be a little more conscious about what you’re consuming (Picture: Getty Images)

How to implement climatarianism into your own life

As Cooking Sections note, ‘It is crucial not to put all the responsibility of malfunctioning systems only on people’s “wrong” habits.

‘While it is important to be aware as a consumer, the main action and change needs to be directed towards Government decisions and big corporate structures that are the ones eventually deciding what we consume when.’

Still, when it comes to limiting the carbon footprints of our own diets, there are some switches we can make.

‘Industrially farmed beef requires a lot of land to grow their feed,’ say Fernández and Schwabe. ‘85% of the world’s soybean crop is used as animal feed.’

As an alternative, you could swap beef for chicken, or, you can eat soybeans yourself instead of it being fed to livestock, reducing the impact of extractive land use.

Look out for it on packaging and opt for foods that don’t use palm oil.

Swapping out-of-season and exotic produce for locally grown food can be a great way to limit your diet’s footprint.

One way we can do this, Fernández and Schwabe say, is to ‘learn more about the heritage varieties of apples or pears in your area, which evolved out of adaptation to those very specific conditions instead of the standard globalised varieties you may find in supermarkets.’

Cut down on sugar and coffee

Due to increased demand and the way they’re produced, sugar and coffee can prove to be bad for the environment.

‘Increased demand for coffee has resulted in production that contributes to deforestation, heavy water usage and runoff that pollutes waterways and destroys natural habitats,’ says Dr Pulde. ‘Sugar production leads to deforestation and destroys natural habitats and is water-intensive, which erodes the soils and contaminates waterways, damaging sea life ecosystem.’

Instead, Fernández and Schwabe recommend replacing farmed or trawled fish with ‘rope-grown seaweeds such as kelp, laver, dulse that provide oxygen to ocean water, or rope-grown mussels or farmed oysters which are a great alternative.’

Nuts beans, lentils and seeds are delicious nutritious and a great source of protein outside of meat.

In fact, Dr Pulde says that ‘replacing beef with lentils and beans could get us up to 74% closer to meeting our carbon emissions’.

It’s especially important to find these foods that are grown without pesticides.

According to Fernández and Schwabe, these crops ‘fixate nitrogen and other compounds into the soil, and farmers are starting again to grow them together or in rotation to enhance the ground’s fertility’.

In the run up to COP26 and beyond, we will be sharing stories, ideas, and advice about one common theme: The climate crisis.

At a time when the weight of environmental issues feels very heavy and overwhelming, our aim is to deliver content that will not only inform and educate but also offer hope and inspiration.

Here are some of our #Just1Change highlights so far: