Dad saves £2.2k by constructing epic playhouse for his daughter

A CRAFTY dad who was quoted a staggering £3,000 for a wendy house for his daughter created his own version complete with heating, electricity and even a bed. 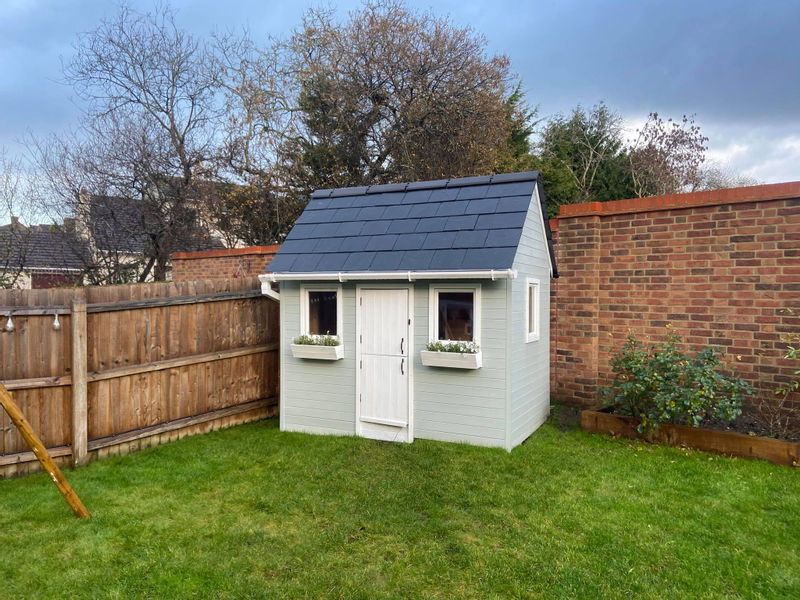 Rich took approximately 40hours knocking up the impressive little house for his two-year-old daughter, and reckons he saved himself thousands in the process.

The Dorset dad told LatestDeals.co.uk “My wife Sophie had a playhouse built for her as a child and wanted our daughter to have the same experience, so that was the drive behind it.

“We were quoted £3,800 by a tradesman to build one, however that was just for a bare shell. Plus, it wasn’t as tall as the one I ended up making.

Rich, who works in digital forensics, continued: “We simply couldn’t afford to spend that much on it.” 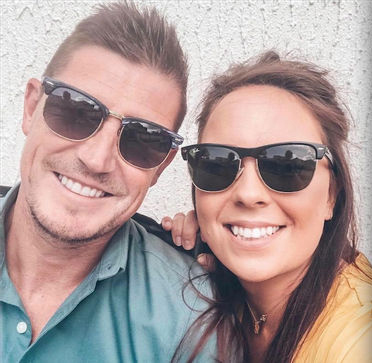 Doting dad Rich was inspired by the DIY playhouse made for his wife, Sophia, when she was a childCredit: latestdeals.co.uk 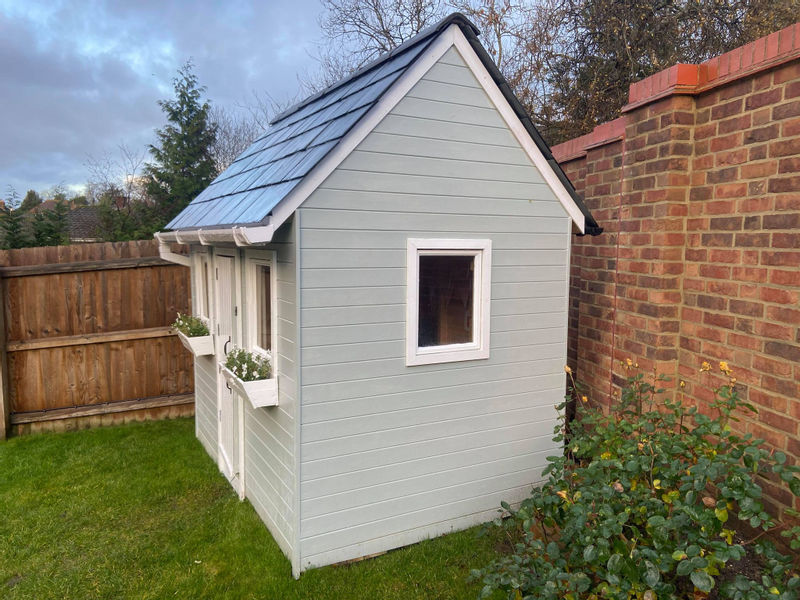 The couple simply ‘couldn’t afford’ shelling out £3,000 for a playhouse built by a carpenterCredit: latestdeals.co.uk

Rich started thinking about the possibility of making his own version, bringing his passion for DIY to the fore.

“I do have an insatiable itch to constantly be doing something,” he says. “I love DIY of any kind, whether it’s working on the car or gardening, but my favourite pastime is building stuff.

“When we moved into our house two years ago I built myself a shed, so I thought that constructing a playhouse wouldn’t be too different. 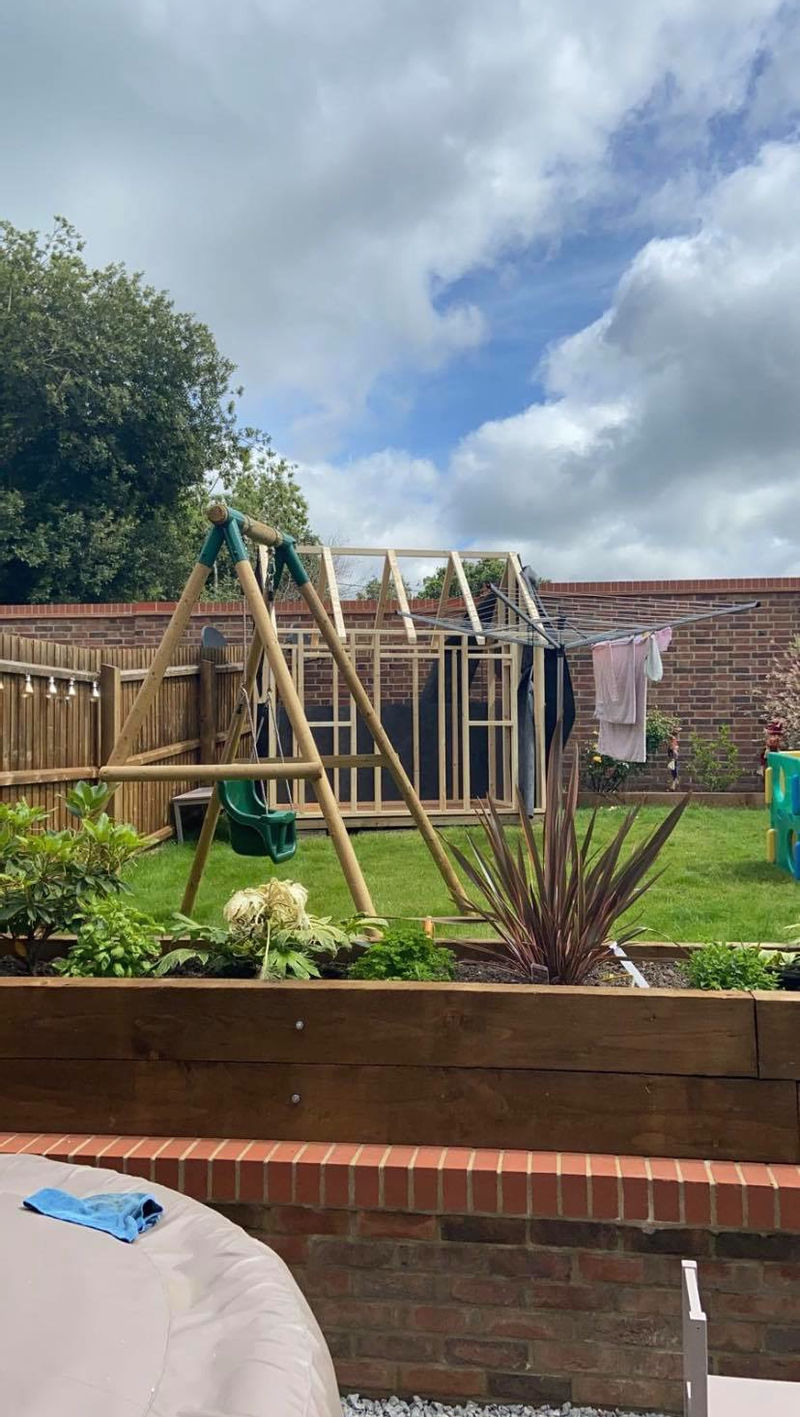 Watching online tutorials gave Rich the inspiration and information needed to knock up his own version in the gardenCredit: latestdeals.co.uk

“I started working out where I wanted it to go and drew up some very rough plans.

“I knew in the back of my head that these would go out of the window when I started building, however, as that’s how my brain works.”

To start off his project, Rich marked out an area for the play house and made a shell of the structure out of 3m x 2m timbers from B&Q.

One of Rich’s first steps was to make a shell of the structure from timberCredit: latestdeals.co.uk

He explained: “I have never had any kind of training for this kind of thing, I spend my days office bound, which is probably why I have an insatiable urge to get outside and do something with my hands.

“When I was 10, my family had a loft conversion built completely out of timber and my uncle played a huge part in the build.

“I was completely fascinated with what he could achieve with just some links of wood so I guess that’s where my love for this kind of thing originated.

“I’m not a tradesman, so I was forced to go down the normal route of acquiring these materials.

“It’s more expensive than a tradesman would be able to get them for, but I didn’t have a choice there.

“I started by working out how big I wanted the playhouse to be so that it didn’t take up too much of our quite small garden. 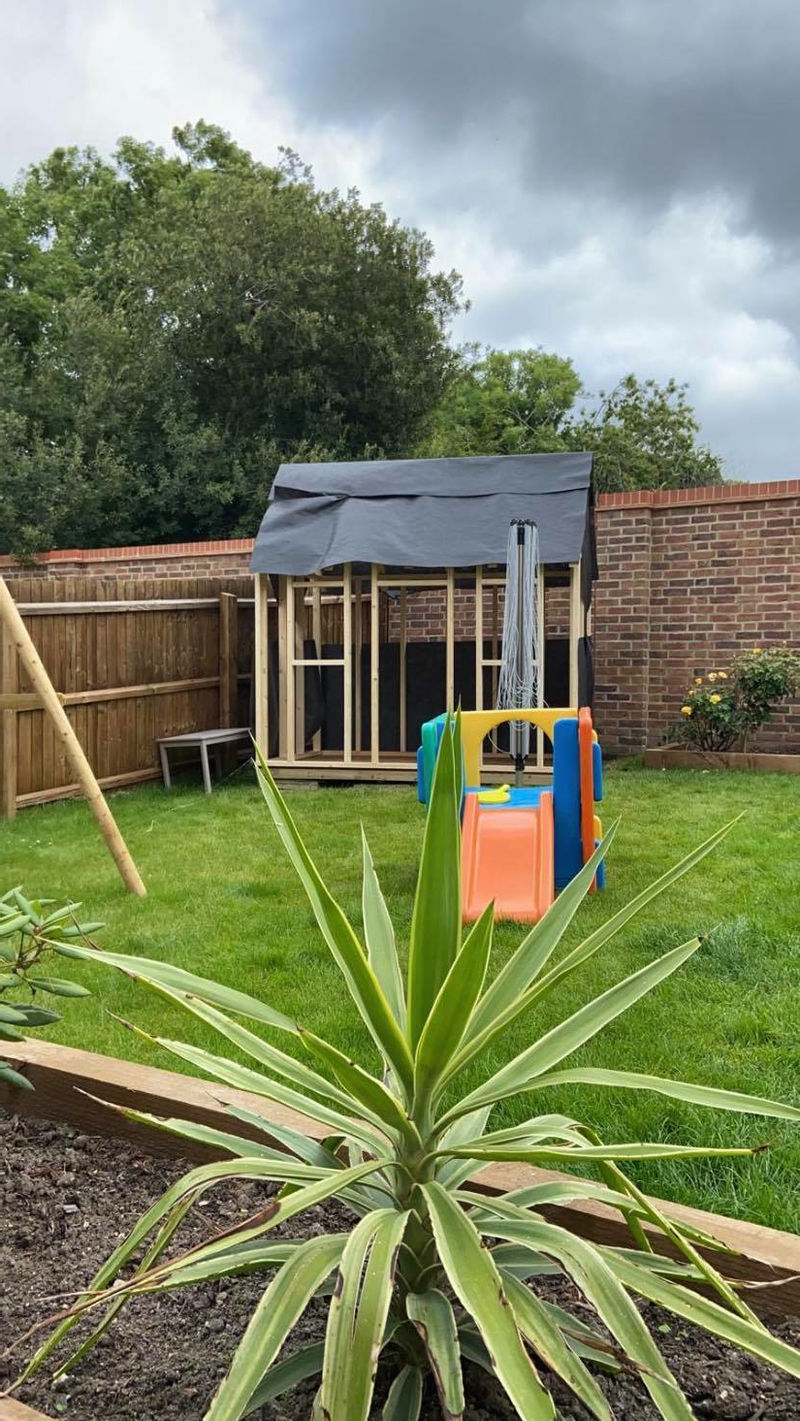 Rich intends for the playhouse to last for years to come, so creating solid foundations was important to the DIY fanCredit: latestdeals.co.uk

“I marked out an area and removed the grass and topsoil on the plot where I wanted it to go.

“Next, I mixed some sand and cement and made a base using reclaimed patio slabs.

“This dictated the size of the frame I was able to build, which was 2.4m wide by 1.8m deep and just under 2m in height.”

“I worked out the size of the window and doors by scaling down how big the doors and windows are on a normal-sized house.

“The timber around these areas was cut bespoke, as I wasn’t following any specific plans or instructions.” 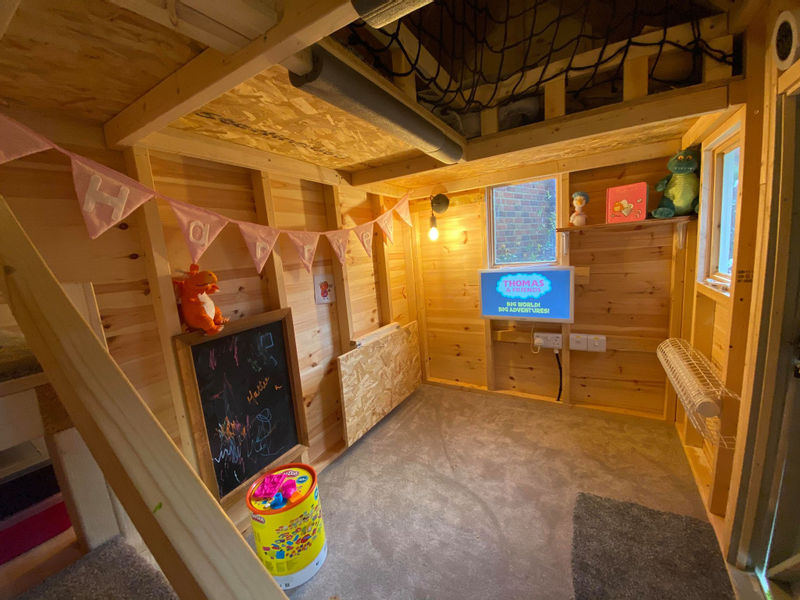 The lucky two-year-old will be able to host friends and hold sleepovers in years to comeCredit: latestdeals.co.uk

When it came to constructing a roof for the playhouse, Rich scoured the internet for information on how to build something both robust and waterproof.

He said: “I watched countless YouTube videos on how to construct a roof and which materials to use to make it waterproof.

“This included figuring out what kind of protective coating needed to be applied to ensure it wouldn’t rot within the next couple of years.”

“I sourced the slate tiles from Gumtree for £20, which was an absolute bargain.

The most difficult part of the job was constructing the windows, for which opted for real glass but made sure to keep the materials child-safe. 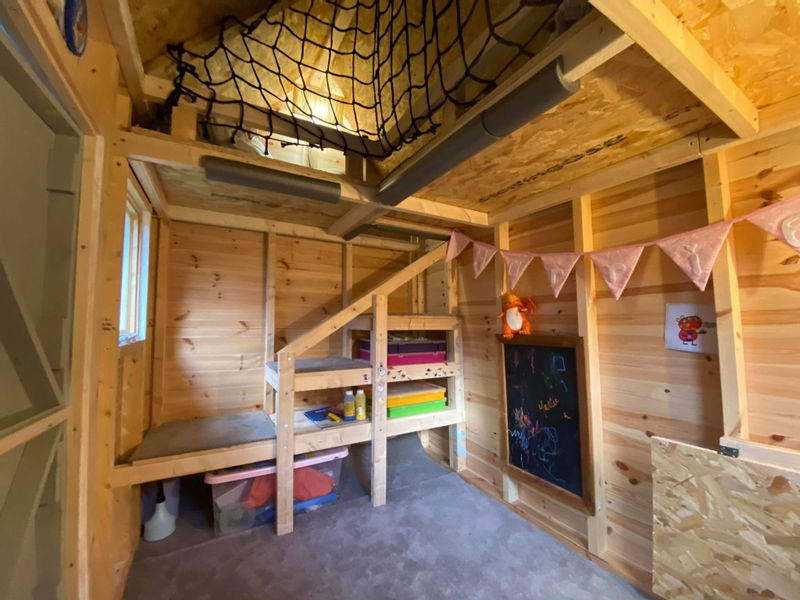 Inside, the impressive playhouse features two floor and homely touches like buntingCredit: latestdeals.co.uk

He explained: “The windows were more of a challenge. With safety in mind, I used normal glass instead of Perspex, but as I knew children would be playing in it, I did some online research and found a company who could supply clear laminated sheets that I could add to both sides of the glass.

“This means that if the glass were to break, there would be no splinters and the whole pane of glass would stay intact.”

He added a lick of paint to the doors, window frames and walls as a finishing touches while an electrician friend added wiring and power. 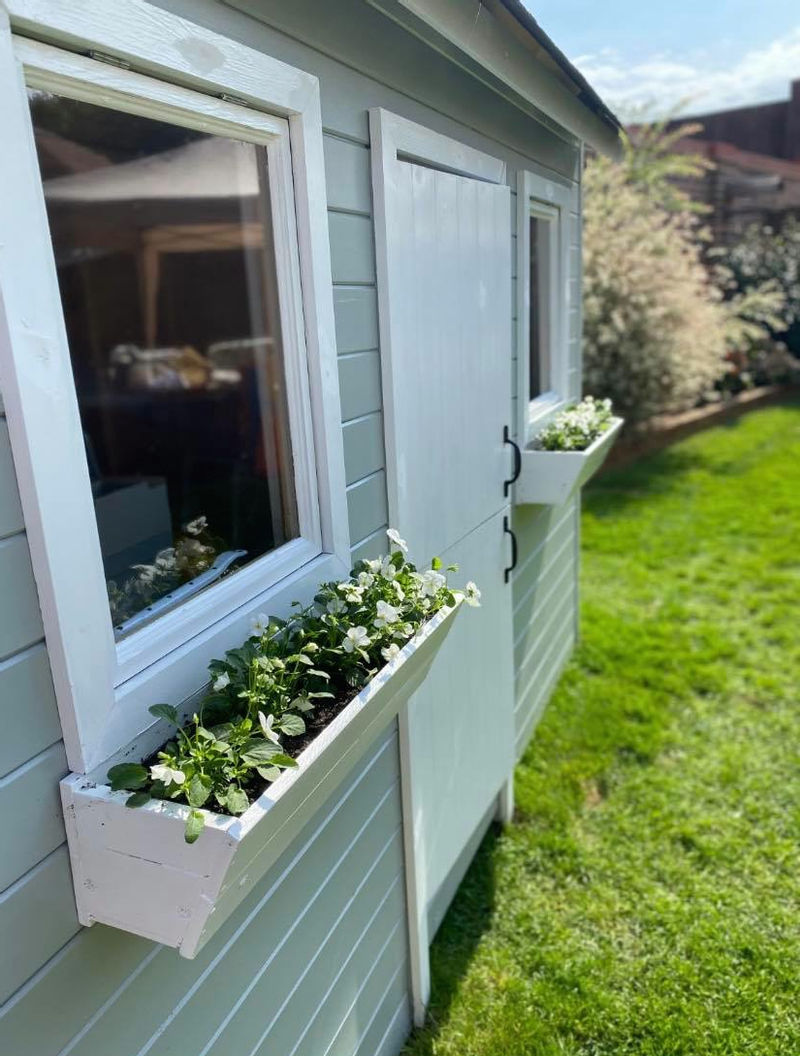 To finish the project off, Rich added a lick of green paint to the walls and some white around the window framesCredit: latestdeals.co.uk

Rich said he is thrilled with the final result, which he hopes his little girl will be able to enjoy playing in for years to come.

“I was really proud of the finished look of the house,” he added. “I love the colour, and the grey slate roof makes the white door and windows stand out.

“But for me, the fun really began when I could set about creating a dream environment inside.

“I added an upstairs nook that she could climb up to with friends. It’s possible that she may like to camp out there and even sleepover when she’s a bit older.

“I finished the house towards the end of the summer, and it was okay to play out there at that time of the year. 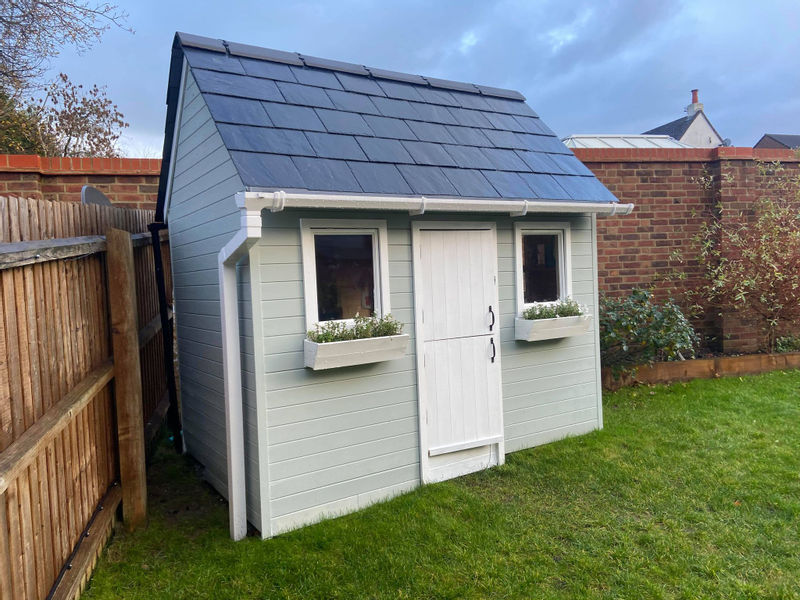 The family hope the playhouse will be a fixture in their garden for years to comeCredit: latestdeals.co.uk

“However, the evenings start to get colder from September so I knew that I would want an electricity supply to provide some heating.

“A friend of mine, who is an electrician, kindly and professionally installed a couple of plug sockets so that we could use a plug-in heater.”

The entire project cost Rich about £800 to complete, meaning he saved around £2,200 on all the materials and furnishings.

“I budgeted around £500 for the project initially, although this was a figure plucked from thin air,” he said. “It ended up costing me £800 in total.

“My daughter is absolutely in love with her little house. Even when the weather is miserable outside we can go there, pop the heating on and feel like we are away somewhere magical.

“As she grows older, I think she will come to realise how special it is and I can see her having years of fun out there with her friends, and maybe one day a brother or sister.

For more DIY inspiration, a couple who were quoted £1.5k for a playhouse for their daughter make their own pink palace for a fraction of the price.

And similarly, a savvy mum breaks down in tears after finishing epic Wendy house for her kids – and even turning their cot into a sofa.

Plus, a mum who was ‘sick of old brown floor’ turns her hallway and dining room grey using £10 stick-on planks from B&M.