In the final day of our exclusive series, Natasha Harding brings you a tasty breakfast and puddings.

Pinch of Nom food bloggers Kay Featherstone and Kate Allinson’s latest recipes are perfect for winter, and won’t have you piling on the pounds 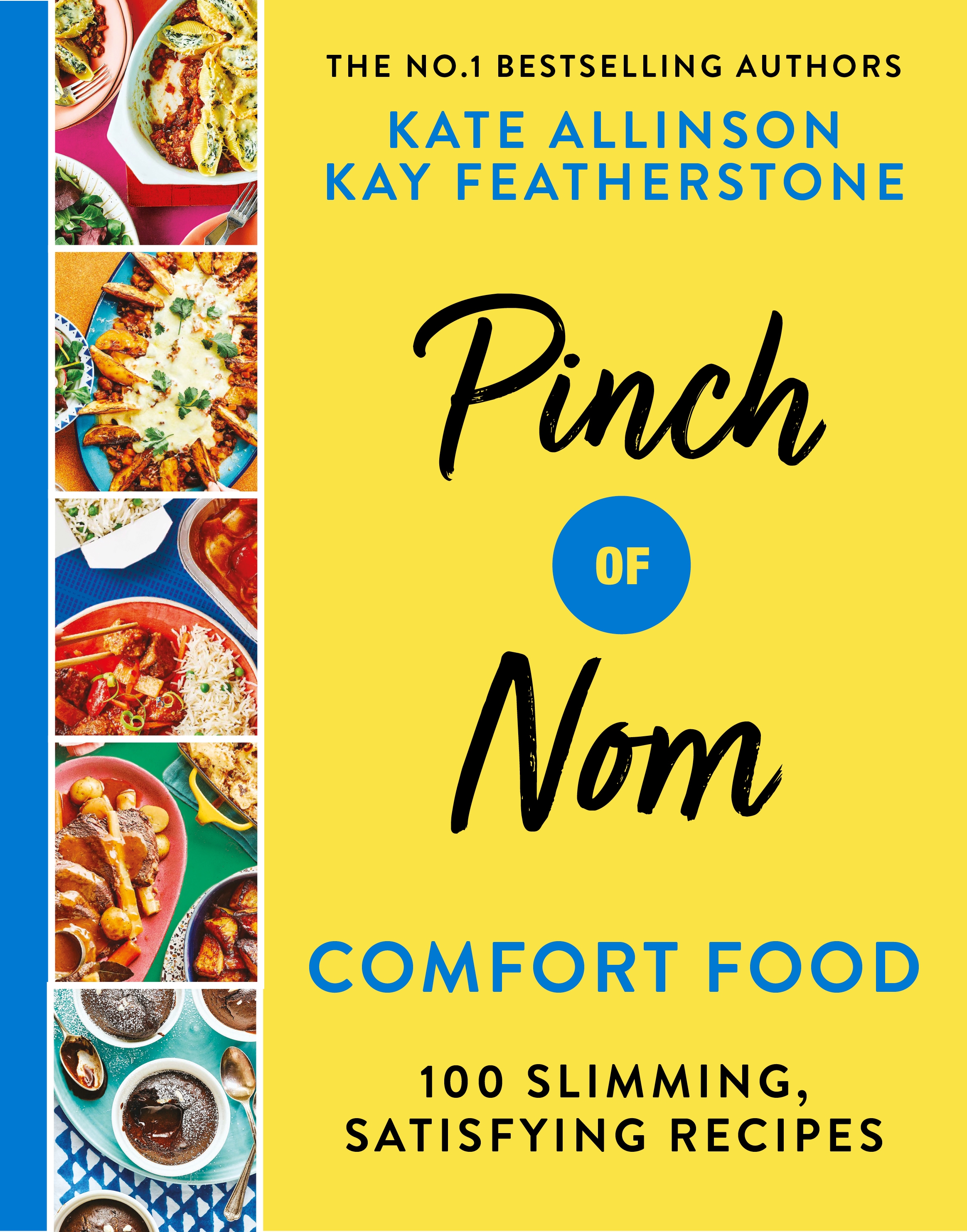 In day two of an exclusive three-day series, we bring you a selection of sides, snacks and light meals 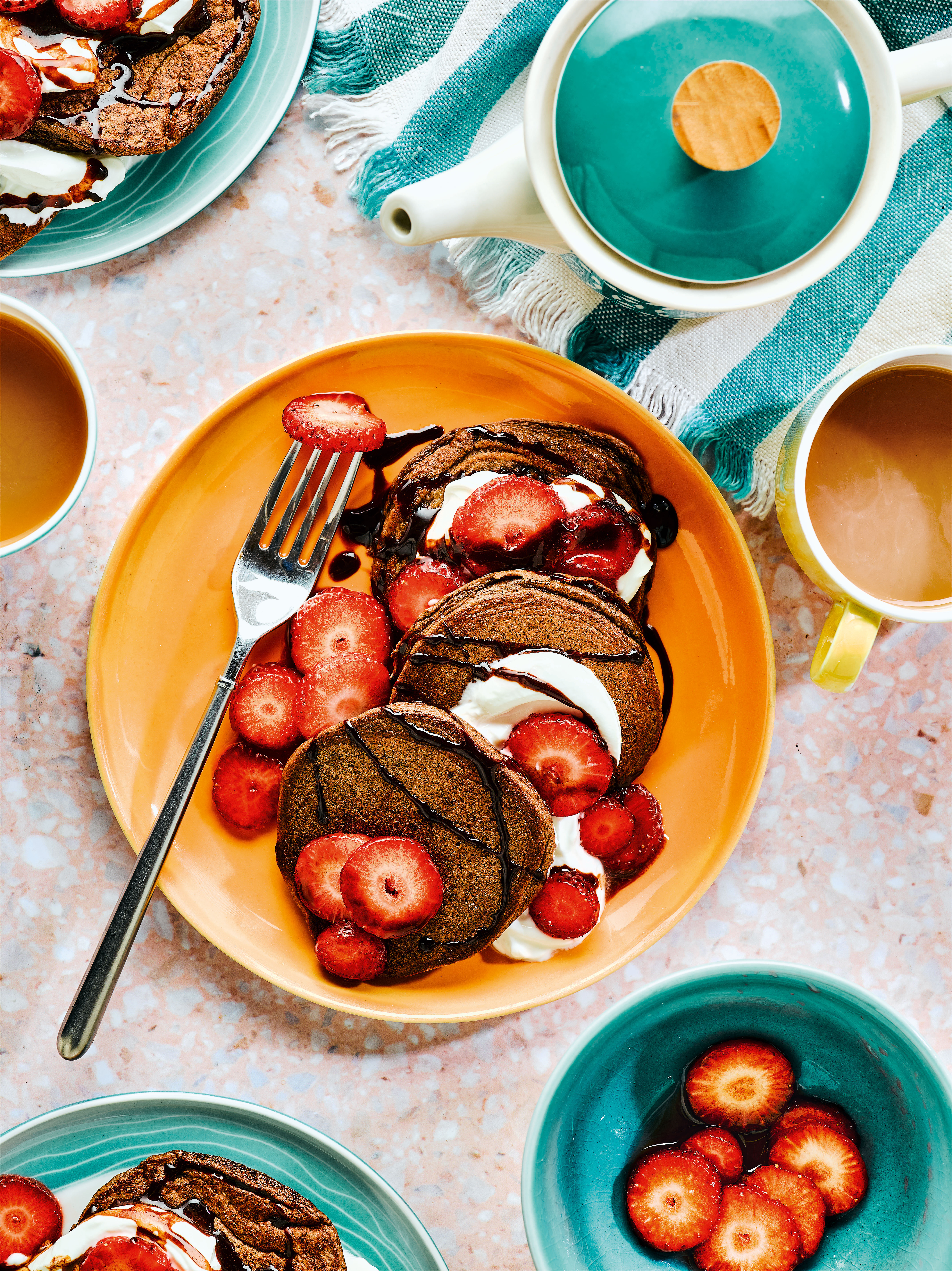 TIP: Sprinkle the strawberries with the sweetener or sugar and leave them to macerate while you prepare the pancakesCredit: Pinch of Nom

METHOD: Sprinkle the strawberries with the sweetener or sugar and leave them to macerate while you prepare the pancakes.

Blitz the oats in a food processor until they resemble a coarse flour (alternatively, you can use 40g of instant oat cereal). Beat the eggs and Greek-style yoghurt in a bowl until well combined.

Place the blitzed oats in a separate mixing bowl and stir in the cocoa powder, baking powder and the second tsp of sweetener or sugar.

Make a well in the mixture and whisk in the egg and yoghurt mixture to produce a smooth batter. Cover the bowl and allow it to rest for 15 minutes.

Spray a large non-stick frying pan with low-calorie cooking spray and place over a medium-high heat.

When the pan is hot, use half of the mixture to spoon three equal-sized amounts of mixture into the pan.

After 90 seconds, small bubbles should have risen to the top of the pancakes and the top should be beginning to set.

Using a fish slice or spatula, carefully flip the pancakes over and cook for another 90 seconds.

When cooked, remove from the pan and cover to keep warm while you cook the remaining three pancakes.

Stack the pancakes on two plates, divide the remaining yoghurt and the macerated strawberries between the plates, drizzle with the chocolate syrup serve. 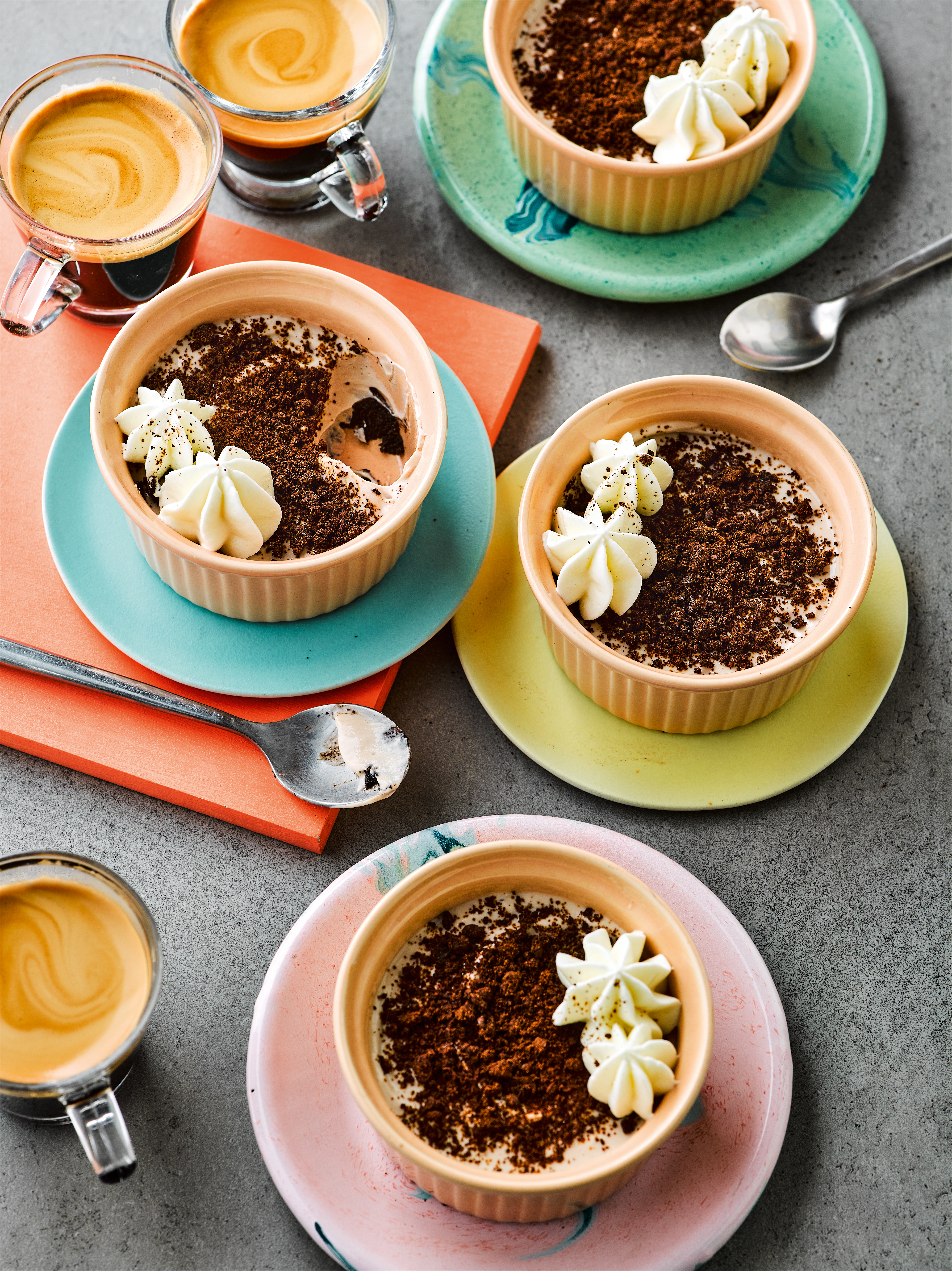 Combine the cream cheese, ricotta, yoghurt and sweetener in a bowl, then beat with an electric hand whisk until smoothCredit: Pinch of Nom

METHOD: Combine the cocoa, espresso powder and boiling water in a small bowl and mix until smooth. Set to one side to cool.

Blitz the first eight Oreo biscuits in a food processor to fine crumbs, or crush them in a food bag by bashing them with a rolling pin.

Melt the reduced-fat spread in a small saucepan over a very low heat or in a small bowl in the microwave, then tip in the Oreo crumbs and 1 tsp of the espresso and cocoa mix and stir until combined.

Tip into four small serving dishes and press down firmly to make an even layer. Pop in the fridge while making the cheesecake mixture.

Combine the cream cheese, ricotta, yoghurt and sweetener in a bowl, then beat with an electric hand whisk until smooth. Pour in the remaining espresso and cocoa mixture and whisk until fully incorporated.

Spoon the cheesecake mixture into each serving dish, on top of the biscuit base. Then smooth the top with the back of a spoon and pop the dishes back in the fridge for an hour until chilled and set.

To make the topping, crush the final Oreo biscuit to fine crumbs, stir in the espresso powder and cocoa and set to one side.

Remove cheesecakes from the fridge and serve with a swirl of low-fat aerosol cream (about 1 tbsp) and a sprinkling of the crushed Oreo topping. 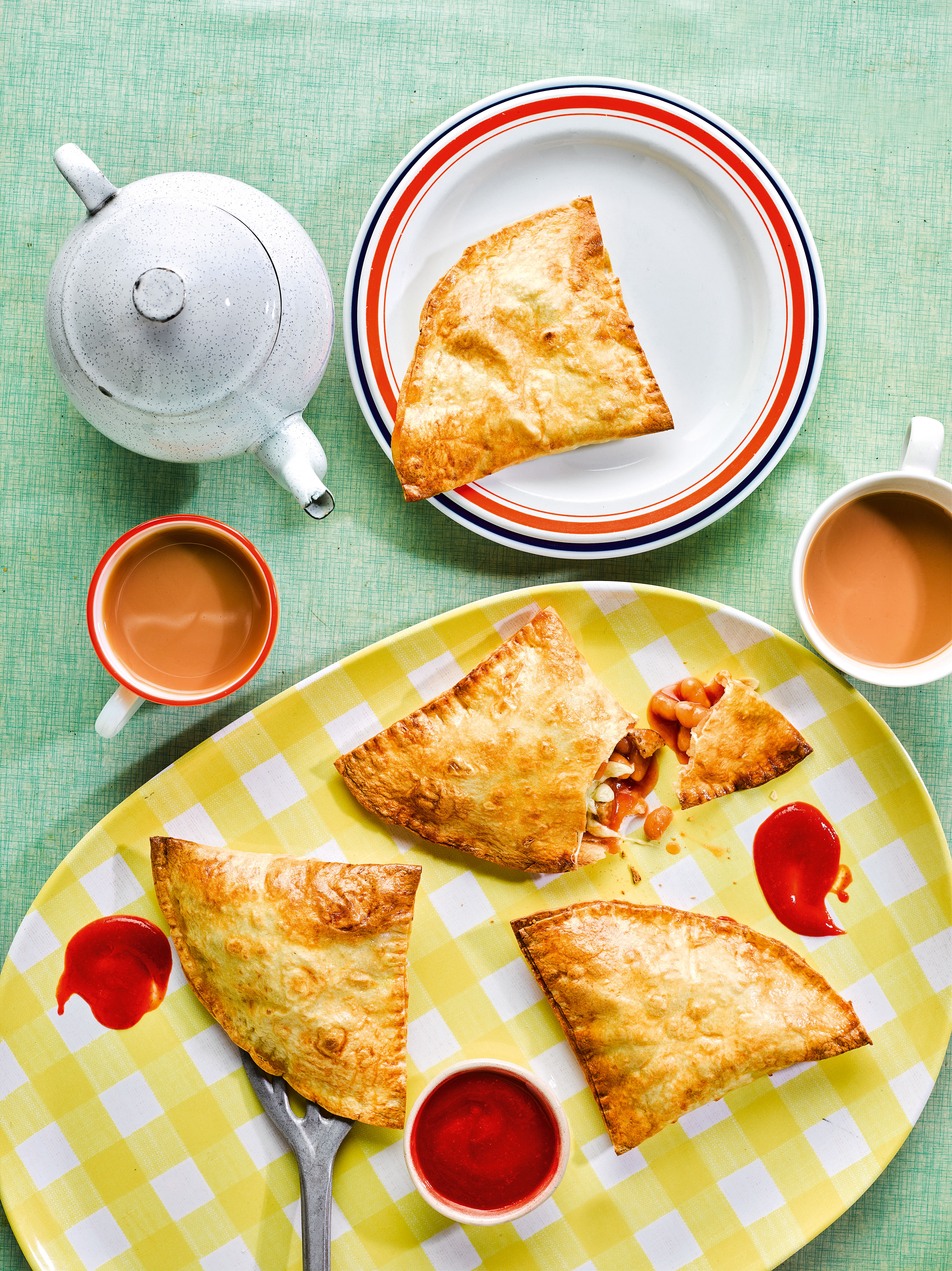 Fold the wraps over to create four triangles and press down around the open sidesCredit: Pinch of Nom

METHOD: Preheat the oven to 220C/fan 200C/gas mark 7. Spray a frying pan with low-calorie cooking spray and place over a medium heat.

Add the sausage and cook for 5 minutes, or until cooked through, then set aside.

Slice the tortilla wraps in half and brush some of the beaten egg over the wrap halves. Cut the cooked sausage into small dice.

Spoon some of the baked beans and sausage pieces onto each half of the wrap. Sprinkle with a little grated cheese, leaving a 1cm (½in) gap around the edge, and repeat until all four halves are done.

Fold the wraps over to create four triangles and press down around the open sides. Crimp the edges using the back of a fork, then place on a baking tray sprayed with plenty of low-calorie cooking spray.

Brush the top of the calzones with more beaten egg and place in the oven to cook for 5 minutes, or until the tops are golden-brown.

Gently flip the calzones, brush with more beaten egg and cook for a further 5 minutes or until golden-brown and serve, with a dollop of ketchup if you like. 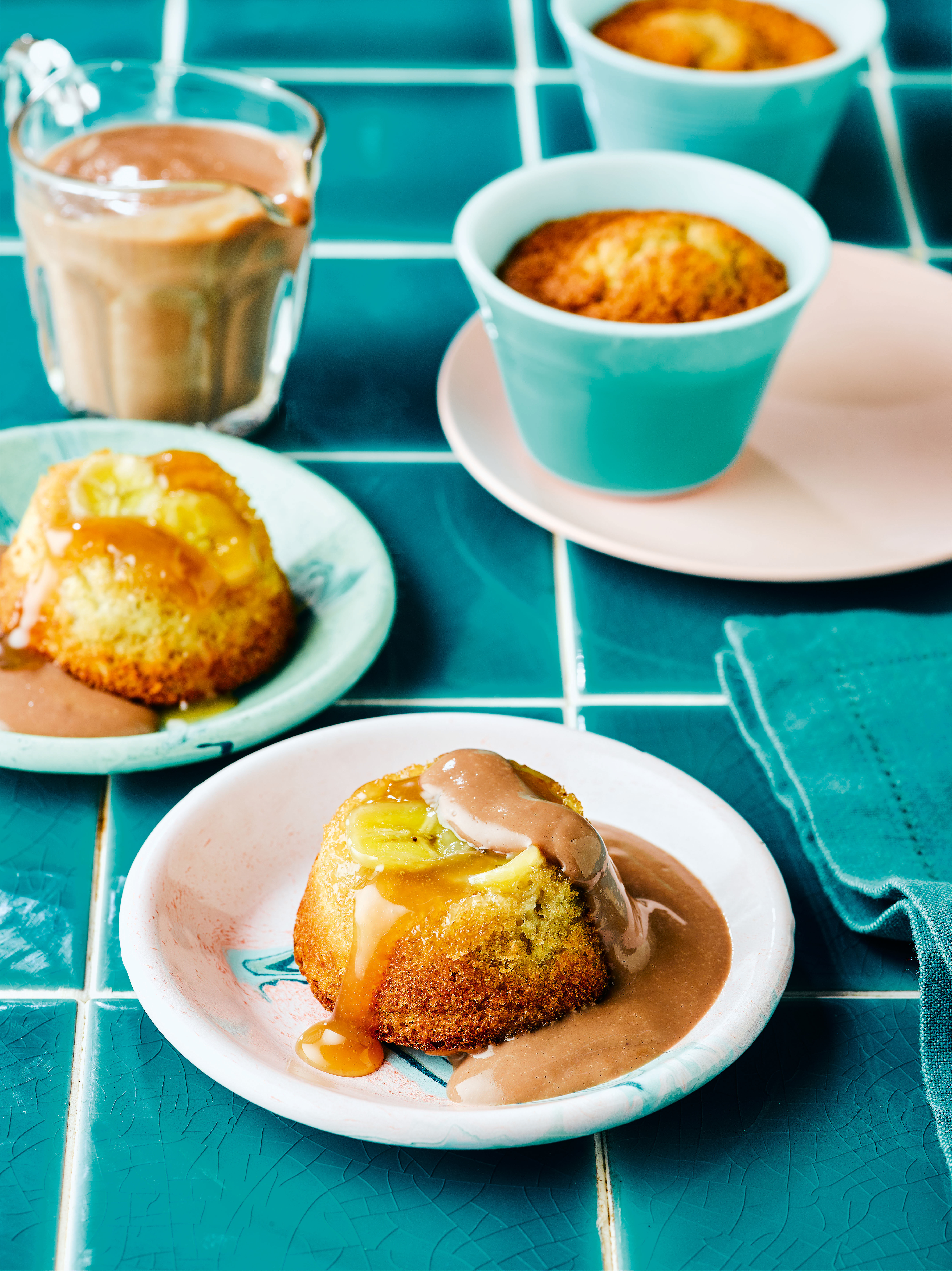 Place two banana slices on top of the caramel dessert topping in each ramekin dishCredit: Pinch of Nom

Thoroughly grease the four ramekin dishes with the little extra reduced-fat spread. Cut eight thin round slices from one end of the banana and set aside.

Mash the remaining banana in a bowl and set aside. Place 1 tsp of the caramel dessert topping in the bottom of each ramekin dish and spread it out.

Place two banana slices on top of the caramel dessert topping in each ramekin dish.

Put the remaining 50g reduced-fat spread in a medium bowl with the sweetener, flour, baking powder, beaten egg and vanilla extract and beat with an electric hand whisk or wooden spoon for 2-3 minutes until smooth.

Fold in the mashed banana until completely mixed.

Divide the sponge mixture between the four ramekin dishes, level off the tops and place on a baking tray.

Place in the preheated oven and bake for 20-25 minutes, or until risen and golden brown. To test if they are ready, insert a small, sharp knife into the centre of the puddings.

When the sponges are cooked, the knife will come out clean.

Run a round-bladed knife around the edge of the sponges in the ramekins to help release the sponges, then turn them out onto a serving plate.

Alternatively, serve them in the ramekin dishes. Serve hot with your choice of accompaniment. 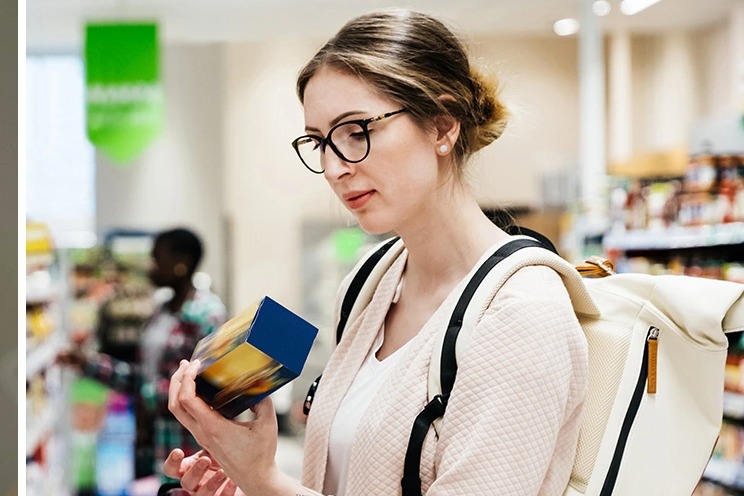