Colette says she only kills what she intends to eat (Picture: mediadrumworld.com/@bowhuntingca)

A woman who hunts for her own meat has shared how a high-protein diet has made her feel much better after years of illness.

Property manager Colette Crick, from Bedfordview, South Africa, started hunting again in 2019, and now she swears by her meaty diet, saying it has significantly improved her health.

As a child, Colette was often ill and was frequently on antibiotics. When she was 18, she says her health issues started to improve after she started to follow a high protein diet and developed an interest in fitness and nutrition.

When Colette got married and decided she wanted to have a baby, she began eating a more balanced diet – one that included fruits and vegetables – and found her ill health returning.

She experienced skin conditions like hives and eczema, physical symptoms like indigestion and a sore throat, as well as dramatic mood swings and anxiety.

It wasn’t until she sent her hair for DNA analysis that she got the answer she’d been looking for – she was suffering from salicylate sensitivity. Most plants produce a natural pesticide called salicylic acid, and it was an allergy to this substance that was causing Colette’s problems. 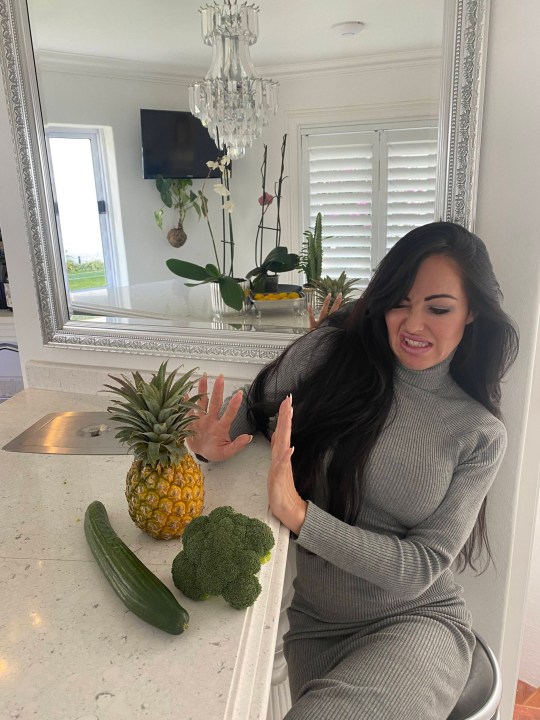 Colette is allergic to a natural pesticide found in most fruit and veg (Picture: mediadrumworld.com/@bowhuntingca)

‘When your health is failing, you get bleak and desperate. It was when I was at my rock bottom that I found the DNA hair analysis company and sent them hair samples, even though I was skeptical,’ says Collette.

‘I literally cried tears of laughter when I researched what salicylate sensitivity was. Everything I was doing to be healthy was poisoning my body.

‘I was making fruit and vegetable smoothies, eating coconut oil and lots of avocados and raw fruits and vegetables, all of which were highly toxic to me. I can’t consume tea, coffee, or even pepper.

‘The moment I stopped eating the culprits and went back to a high protein diet, my health turned around in a matter of days.’

Returning to her high protein diet, Colette began to question where the meat she was consuming came from. She decided the only way she could know her meat was truly free-range was to hunt it for herself.

Once she’d made the decision, she bought a bow and arrow and began training.

She practiced her archery skills for a year before making her first kill. The first animal she hunted when she felt she was ready was a warthog.

Colette says hunting is her passion and she adores being a part of nature and the ‘circle of life’, although she has received criticism online from people who are against hunting.

‘My family are all very supportive and impressed and my kids are proud of their mummy,’ says Colette. 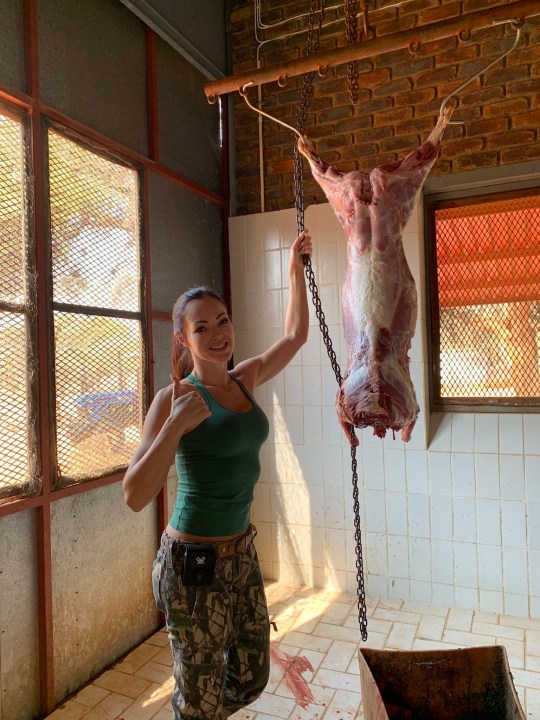 She hunts, skins, cleans and prepares the meat entirely herself (Picture: mediadrumworld.com/@bowhuntingca)

‘I felt like I owed it to the animals I was consuming to have the stomach to see the process through. If I couldn’t do the whole thing, did I deserve to eat the animals?

‘I chose a bow and arrow because firearms put us at such as huge advantage that it almost doesn’t seem like hunting to me.

‘I practiced my archery skills and improved my strength for a full year before I made my first kill. I wanted to be strong enough to pull a high poundage bow which meant that I would be more accurate and therefore more ethical as a hunter.

‘I felt bow hunting was the most non-invasive way to hunt with no loud bangs to stress the animals out or meat spoilage.’

Colette has now been hunting for two years, but she says she only hunts when her freezer is running low on meat, and she only kills what she plans to eat.

‘I would say 90% of the meat I eat is from hunting and I hunt about five animals a year,’ she adds.

Colette’s son Colt has the same allergies as her and she says she would love to take him hunting with her one day.

‘It’s much harder to bow hunt than rifle hunt. If I was a rifle hunter I would have taken him with me already,’ says Colette.

‘He has to build up his draw weight to hunt ethically with a bow.’

On a usual day hunting, Colette says she wakes up at around 4 am and puts on lots of layers of clothes.

‘You can’t wear anything scented like face creams or deodorant or the animals will pick up on it,’ explains Colette.

‘I head out before the sun rises and once I get to the hide I don’t like to leave again. If you need to pee, you have to pee in a bottle.

‘If you are lucky and make a kill you first go and check if the arrow passed through. Then you track the blood trail and hopefully find your animal.

‘The animal I most enjoyed hunting is an impala as they’re very challenging to hunt – the biggest animal I’ve successfully hunted is a one-hundred-and-ten-pound impala.’

Colette says she finds the skinning, butchering and cooking to be hard work but rewarding.

‘My advice to someone who wants to start hunting their own food is to give it a go,’ she says.

‘I believe venison is the new vegan. At least I know when the apocalypse happens, I’ll be able to fend for myself.’