JEFFREE Star has slammed the shocking rumors he’s dating Kanye West and was the reason for his nasty divorce with Kim Kardashian.

The beauty YouTuber made it clear that he is “single” and “not sleeping with anyone” as speculation circulates the internet that he had a fling with the Grammy-winning rapper. 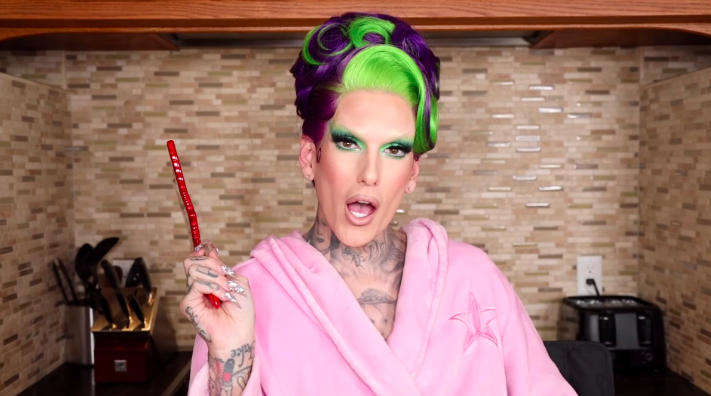 After days of fueling rumors he and Kanye, 43, were an item, Jeffree, 35, uploaded a lengthy video to his YouTube page.

He captioned the video: “Hi 2021, let’s relax. Addressing this Kanye West and Jeffree Star situation and the truth about why I moved to the state of Wyoming.”

The internet sensation then went on to tell his nearly 17 million subscribers: “I’m single … I’m not sleeping with anyone.

“This is so weird … this is so stupid. Let me just say this one time … I like very tall men,” he added.

Jeffree is just over 6’ tall while the Yeezy mogul stands at 5’7”.

To further shut down the rumors, Jeffree continued: “Me and Kanye have never hung out.

“And this whole thing is really funny. I get why people are really laughing about this.

Earlier today, Jeffree fueled the dating rumors by sharing a picture where fans insist Kanye is seen in the reflection of his sunglasses.

The makeup expert appeared to be near the Wyoming ranch Kanye has been staying at the past year.

As he held a live chicken with the snowy mountains in the background, three people can be seen in the reflection of his polarized sunglasses.

Fans have insisted that one of the people in question in Kanye which further heightened speculation the pair hooked up.

The allegations were started by a TikTok user called Ava Louise, who is known for a viral clip of herself licking a plane toilet seat for the “coronavirus challenge”.

Ava said in a clip that she wasn’t surprised by reports that Kim and Kanye are heading for divorce.

“Kanye’s been hooking up with a very famous beauty guru, male beauty guru, a lot of people in the scene have known for a while,” she claimed.

“A lot of people in the scene have known for a while.”

The influencer admitted she has no “concrete evidence” to back up her claims, but alleged that an entertainment lawyer in LA told her.

More buzz escalated earlier this week when the make up mogul shared a photo of himself with rainbow-colored hair and wearing a pink dressing robe.

“I’m ready for Sunday Service,” he captioned the shot, in reference to Kanye’s famous Christian gatherings.

Jeffree also shared a video of himself in Wyoming, where Kanye lives on a $28 million ranch.

Recently, the cosmetics artist moved to Casper, Wyoming which is two to three hours away from Kanye’s country property.

Earlier this week, reports surfaced that Kim is “done” with her marriage and is preparing to split from Kanye.