Enjoying all that London has to offer now that we’re allowed to party properly?

While you’ll probably be off to your old favourites first, there are some seriously exciting new kids on the dining scene.

So we’ve done you a favour and sniffed out the brand new eateries have to be added to your foodie hit list.

From ethical burgers to African fusion cuisine, the capital’s food scene just got even better. 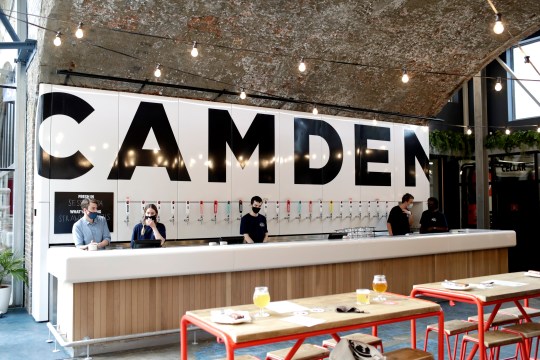 Like beer? This is the place for you (Picture: John Phillips/Getty Images for Camden Town Brewery)

Fancy somewhere that brings together beer, banging Italian food, and the chance to brush up on your brewery knowledge?

And sign up for the Beer School which includes a brewery tour, a meeting with the expert brewing team, and a tasting. What more could you want?

Tigre Tacos at The Gunmakers, EC1 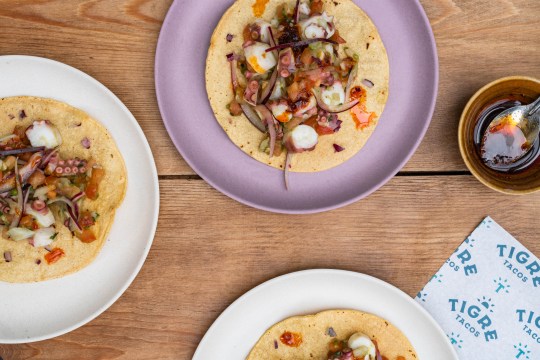 From food truck in Bermondsey to permanent residency in Clerkenwell, Mexican chef Ramon Ramos has brought his tasty tacos to stylish gastropub, The Gunmakers.

There’s a pescetarian focus, with Baja fish featuring beer-battered catch of the day, and Camarones with grilled prawns, habanero and roasted pineapple salsa, but veggies are catered for too.

Other dishes include proper, good guac, quesadillos and ceviches, and for the brave – or really hungry – you can order a whole roasted octopus to share. Come down on a Tuesday, when tacos are only £3 each.

Drinks-wise, there’s a Tequila and Tonic menu, many mezcals, and Mexican beers.

Pergola on The Wharf, E14 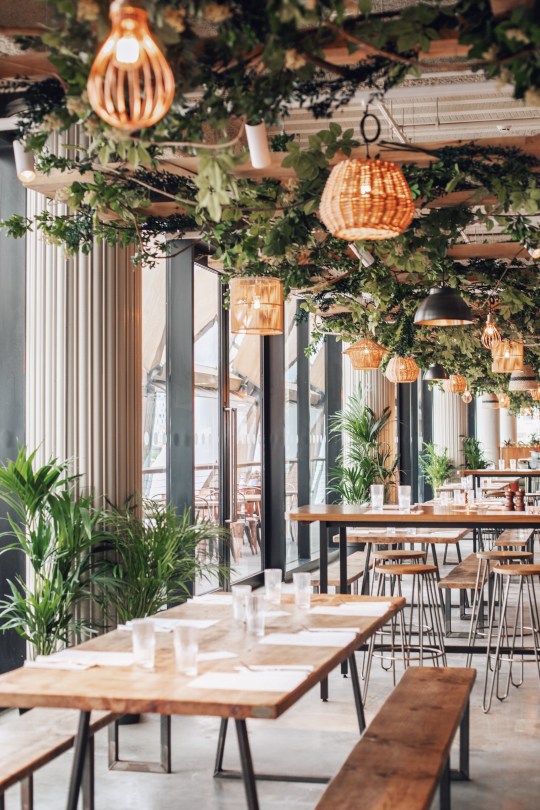 After the success of their sister site in Paddington, this new, airy space perched on the top floor of one of Canary Wharf’s less sky-scraper-y sites still offers fabulous views across the water.

GROUND at The Spurstowe Arms, E8 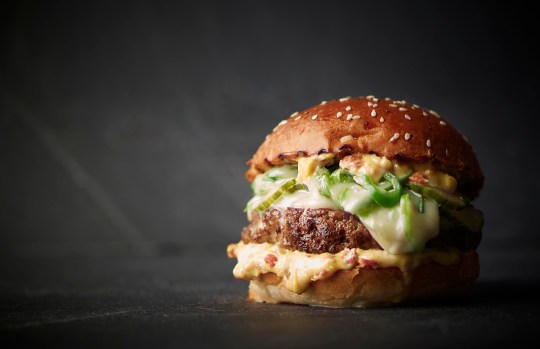 Ethically produced meat is becoming more and more important, and the founders of the aptly-named Ethical Butcher, Farshad Kazemian, and Lily Bovey, have produced GROUND, a new climate-positive burger brand that shows burgers don’t have to be bad for the planet.

Their network of UK farmers all use regenerative agriculture methods, resulting in a burger that’s not only delicious but good for the conscience.

They’re being served up at The Spurstowe Arms in Hackney; try the Trailblazer, a whopping patty stacked with pasture-fed cheese, green chillies, Baconnaise and seasonal pickles, or the Omground, with confit onion jam, lettuce and onion mayo.

Don’t miss out on sides and snacks such as the Cumberland Scotch egg, cheesy chips or charred cabbage quarters. 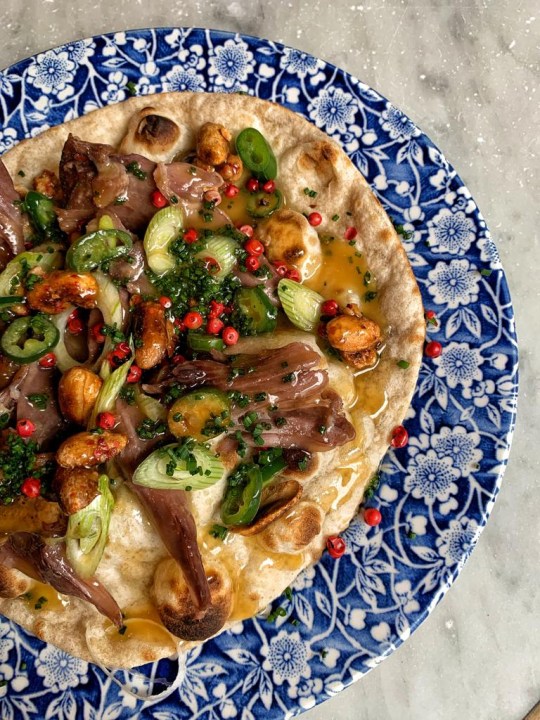 We can’t say naan to a good cause

You’ve still got time to catch the collaboration between the Chop House’s chef and naan master, Kundan Singh, and resident chef Tom Cenci (formerly from Duck and Waffle).

Until the end of August, Tom is taking to the tandoor to produce a special, mouth-watering naan stuffed with confit duck leg served with spring onion, chives and green chill, finished with peanut brittle, pink peppercorns and a miso caramel.

£1 from each one sold will be donated to Tom’s chosen charity, Beder, which works to raise awareness around mental health and suicide prevention. 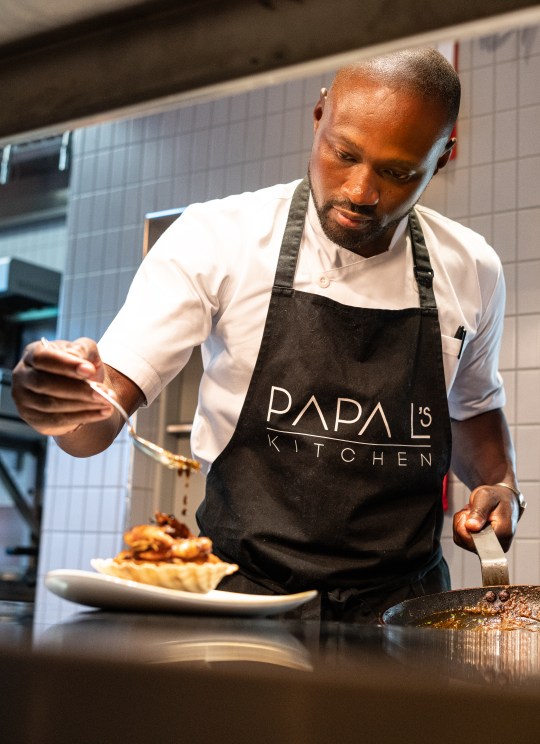 Executive chef and founder of Papa L’s, Lawrence Gomez (from Sexy Fish and Scott’s), is bringing his African fusion cuisine to Jermyn Street.

On the menu are his signature, secret recipe grilled king tiger prawns, Ma’s Benachin rice – dedicated to Gomez’s mother – and also a recipe passed down from her is a national dish from Gambia, the tempura kanja.

Other dishes include dover sole fillet, and the Papa Lova – a take on Pavlova, Eton mess-style, with his own raspberry coulis.

The restaurant will be a rich celebration of African countries and diaspora through art, ambience, music, vibe, energy – expect good vibes as well as good food. 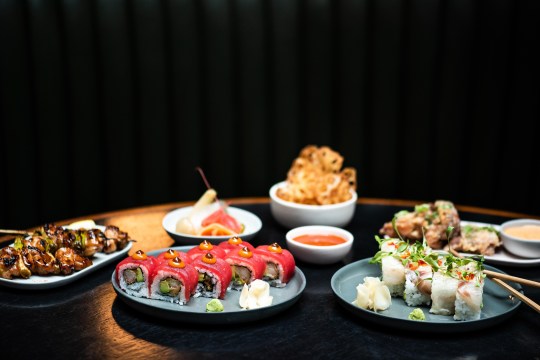 Apothecary is a new izakaya (Japanese style pub) in Shoreditch dedicated to drinking, music, and small plates. Dishes from the robata grill and kitchen dishes will include grilled skewers, sushi, and steamed buns, but here the drinks take centre stage.

The cocktail list has been curated by drinks specialist Hamish Denny (of Spiritland and Hawksmooer), and combines classics with Asian influences. Highlights include the Whisky Highball (made using Toki whisky, soda, and Genmaicha tea); the Sweet Pea (made with tequila, lemon, sweet pea, soda, and absinthe) and the Rhubarb Sbagliato (containinggGin, rhubarb, rose, fizz, and umami).

Sakes (both hot and cold) will also be offered in small ‘taster size’ to encourage those less familiar to sample the delights of this Japanese rice wine, alongside a range of beers, both local and Japanese, and an extensive wine list. 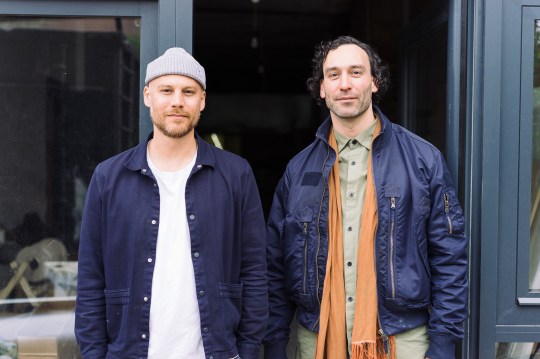 This warehouse brasserie and wine bar is the project of several very talented people, including Anthony Lyon (of Lyon’s seafood & wine bar), esteemed sommelier and Kikisake-Shi Master of Sake, Kelvin McCabe, and musician Pete Denton (involved in the curation of the music and artwork).

Head chef Dominic Auger used to work at HIDE in Mayfair. It all adds up to a set of very impressive credentials, and the menu is no less ambitious: the food is seasonally driven with minimal-waste in mind, and is not attached to a specific cuisine.

Instead, flavours rule, with pickling, curing, and smoking all playing an important part.

You’ll also find a wide range of biodynamic and organic wines and sakes. 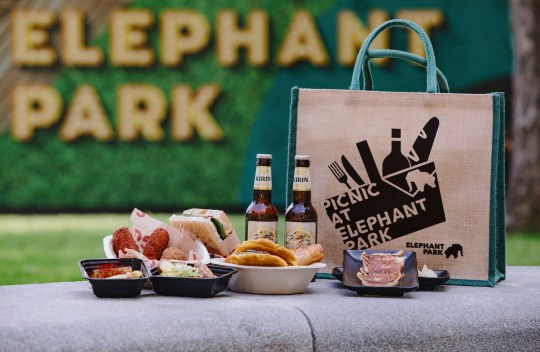 Picnic in the park

You’ve got until the end of the month – which is National Picnic Month, if you didn’t already know – to head down to Elephant Park, one of London’s most exciting new eating and drinking destinations.

Basically, you pack a tote bag with a selection of treats from a range of their street food stalls, which are each offering a dish at a discounted price.

Cointreau and SUPPER London, via delivery 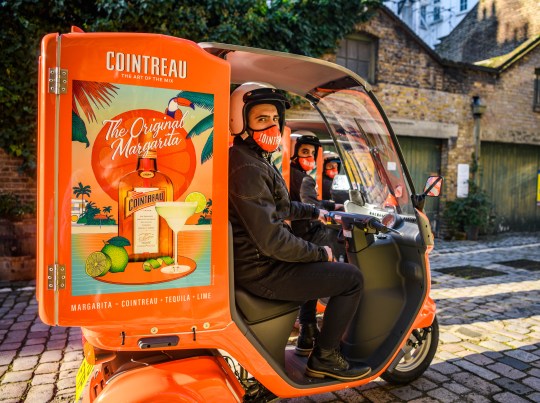 Saturday the 24th of July is National Tequila Day, and to celebrate, Cointreau has teamed up with  premium restaurant delivery service, SUPPER London, to gift a free Cointreau Margarita to everyone who orders a meal from the SUPPER London app on the day.

Helping Londoners get into the celebratory spirit, watch out for a fleet of Cointreau branded bikes circulating the capital bringing all the energy and vibrance of Acapulco to life by delivering refreshing Cointreau Margaritas to thirsty households!