CARA De La Hoyde’s life has completely transformed since she won us over with her down-to-earth attitude and unshakeable partnership with Nathan Massey on series two of Love Island.

Four years on, the Essex girl has ditched the fake lashes, immaculate make-up and carefully chosen outfits (she says her “priorities have changed”) and is fully immersed in life as a busy mum of two. 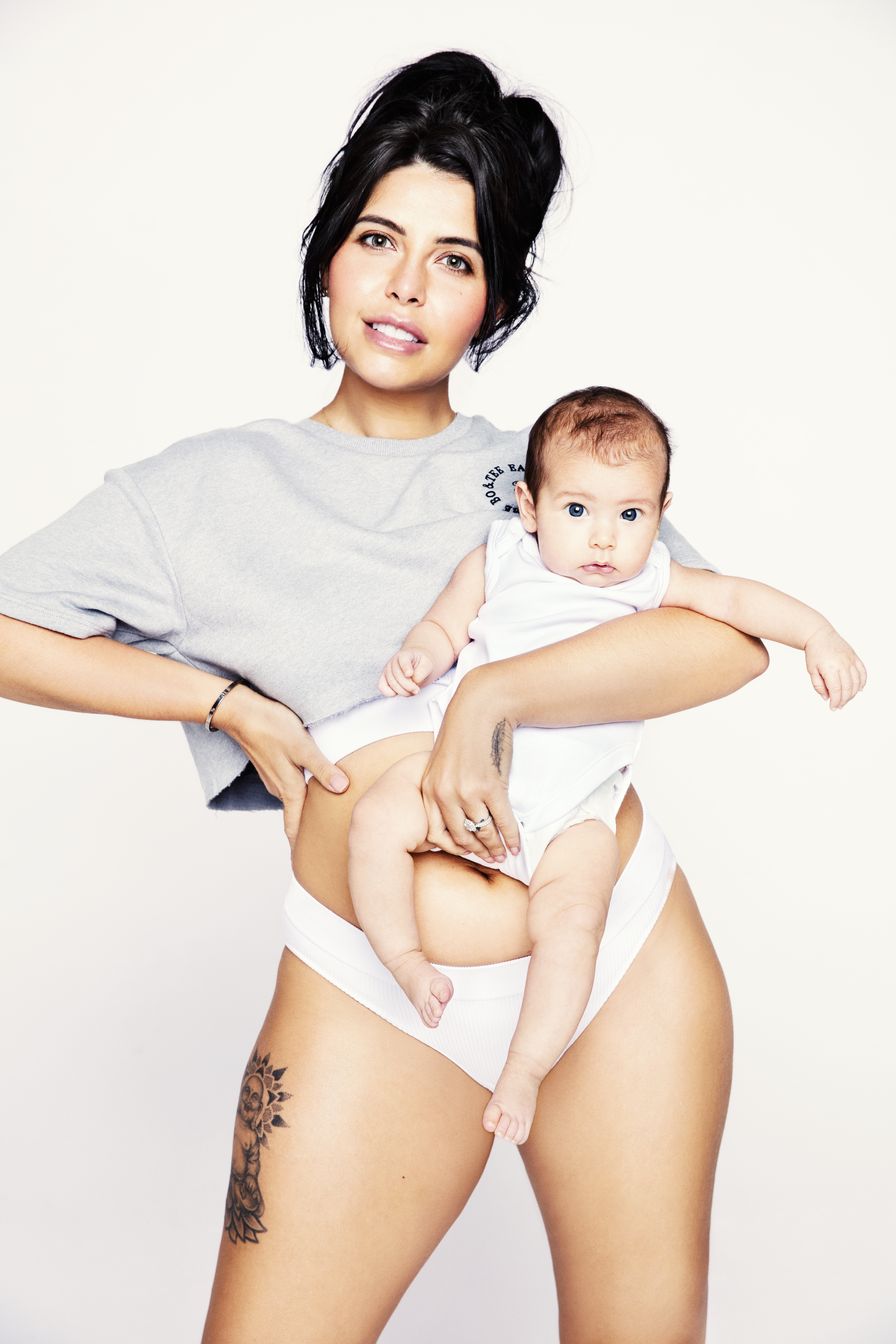 As well as their two-year-old Fred, Cara and Nathan, who married in 2019, welcomed daughter Delilah in July. And today, Cara, 30, has stripped off for a post-pregnancy photoshoot with us to show how proud she is of what her body has achieved.

She wants to show motherhood through an honest lens rather than the rose-tinted one of picture-perfect mummy bloggers.

“I can’t wait to ‘treat’ myself to a shampoo,” she laughs. “Today I showered for the first time in four days, which is a big thing!” She confides that she’s enjoying the precious time alone that our video-call interview is giving her
while

Nathan, 31, a stonemason watches the kids. “Although if Delilah starts kicking off I’ll have to get my boob out,” she adds. “This is mum life.”

Cara, how is motherhood treating you this time around?

Going from one to two is mental. I thought: “I’ve got this” because Fred is independent and he tells me what’s wrong and asks for things. Then Delilah came along… 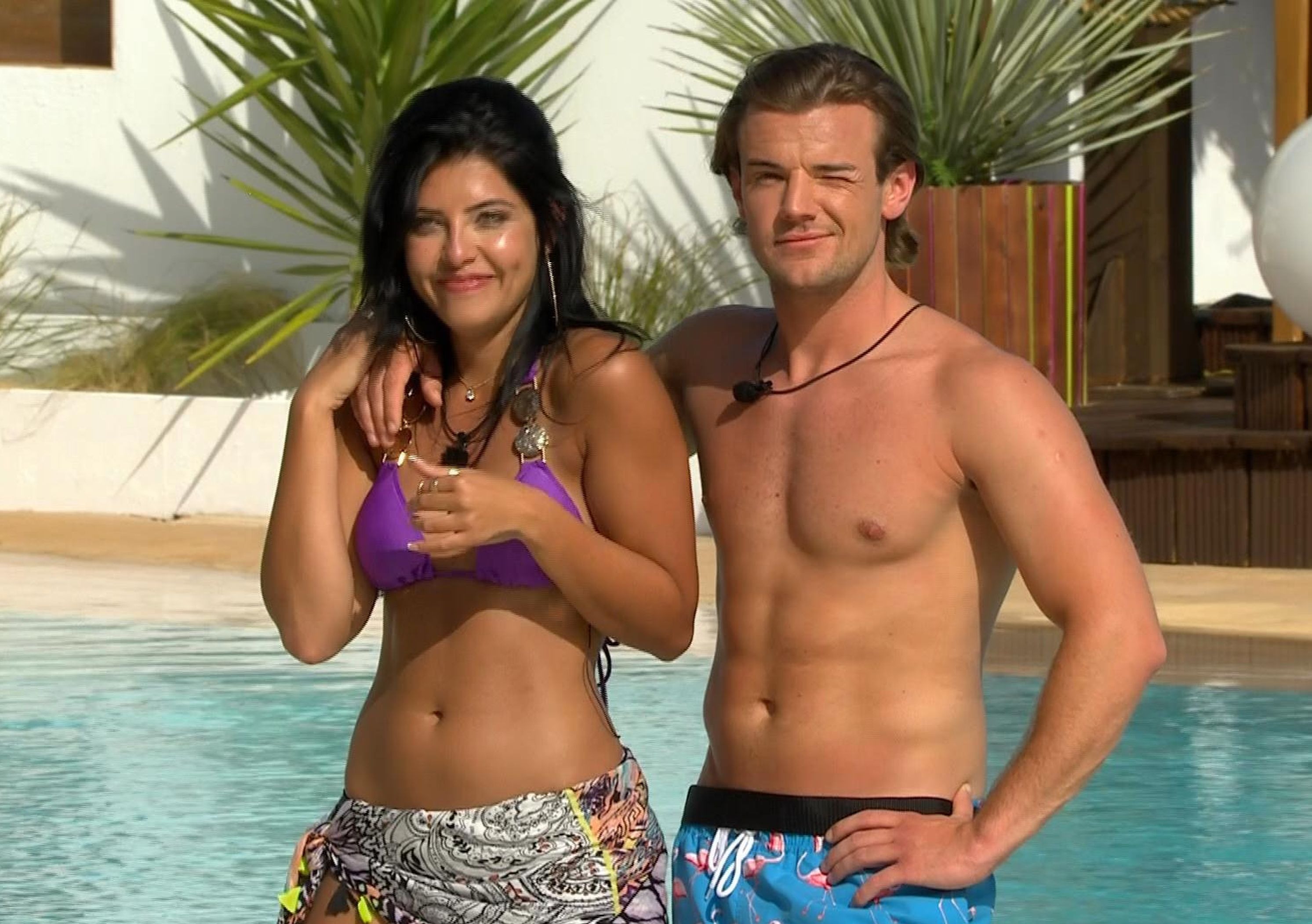 She married Nathan Massey in 2019 after meeting on the second series of Love IslandCredit: Shutterstock Editorial

Has pregnancy changed the way you view your body?

One hundred percent. Before Love Island, I was a dancer so my body was my commodity. It earned me money. Working in clubs six nights a week, I didn’t need to go to the gym. Once you have kids, you need to cut yourself some slack because your body is going to change.

But it’s done something amazing. Even my social media is different. Before I had kids, I’d never put up the pictures I do now.

Are you ever tempted to edit your pictures for social media?

I’ve never been someone who’s been bothered about editing. Sometimes I’ll put a nice filter on it, but that’s it. I don’t even know how to do it! Some people edit their pictures too much. I’ve been with them in real life and if their fans saw them on the street they actually wouldn’t recognise them.

It’s really important to you to be honest about the highs and the lows of motherhood, isn’t it?

I’ve had to unfollow some mum bloggers because their lives look so perfect. Good for them that they have got their s**t together, but I’m a mum who is winging it. Double winging it now with two kids! I’d love to be one of these mums who makes lunchboxes look amazing, but I haven’t washed my hair
for five days and Fred has the odd McDonald’s. If they’re making me feel like I’m not doing enough for my kids, I unfollow. I don’t need that stress. 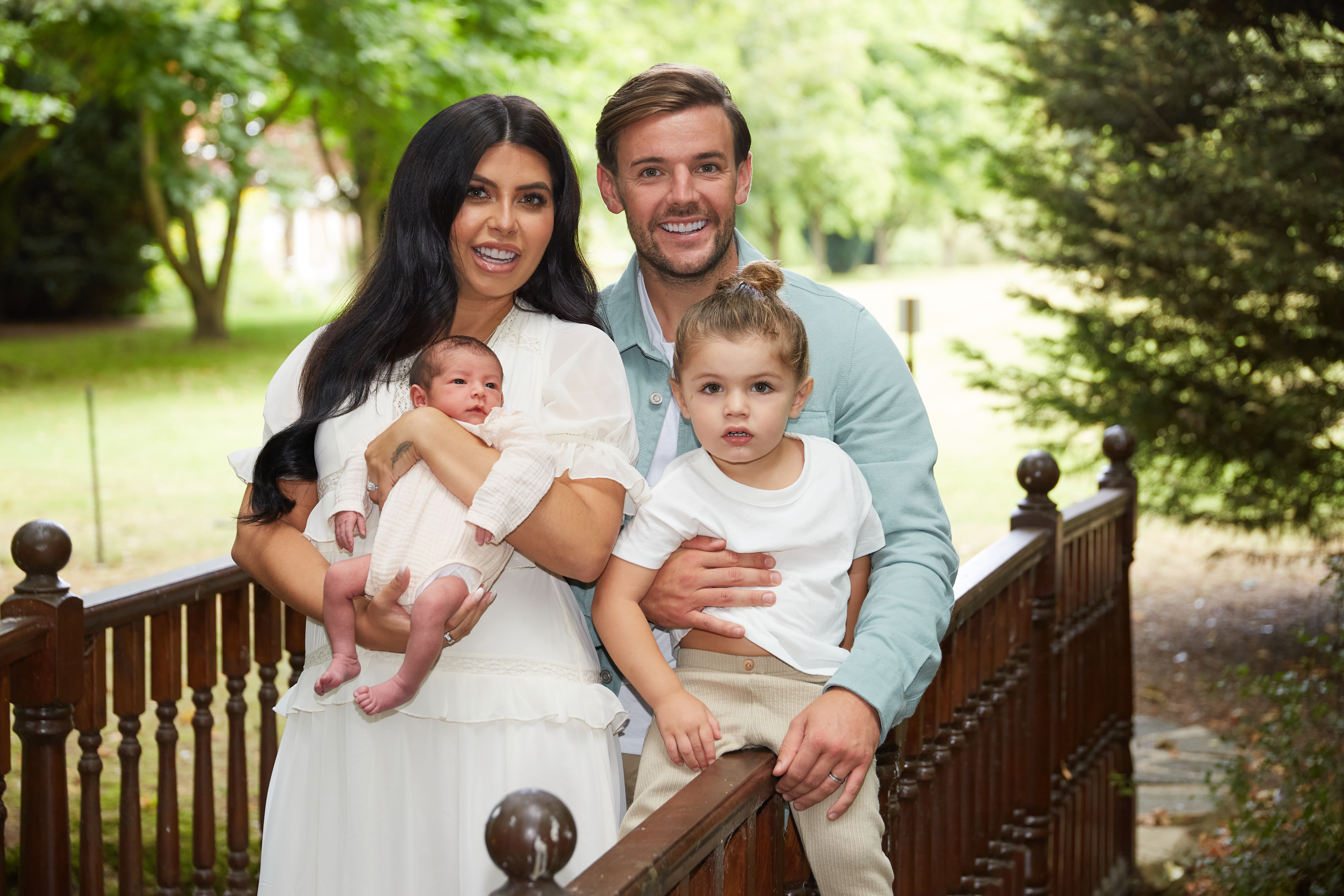 She wants to show motherhood through an honest lens rather than the rose-tinted one of picture-perfect mummy bloggersCredit: Mirror Pix/New Magazine

Are you less worried this time about getting back to your pre-baby weight?

Obviously, I want to be back to feeling good. But your body changes and so do your expectations of it. I’m never going to have a totally flat stomach, I’m always gonna have a little pouch and the skin is going to be a bit saggy. My bum is never going to be as pert.

My boobs are probably never going to be as “perfect”, but I’m fine with that. Nathan still finds me sexy. There’s a perception that you’ve got to snap back and start exercising now you’ve had the baby, and it’s not realistic when I’ve got two kids.

Are you more aware of sending out a message of body positivity now you have a daughter?

Yes! Girls have to go through so much. I want Delilah to be confident and healthy and not worry about that stuff. I’ve always been open about fillers and Botox, but I wouldn’t want her to feel she’s got to change herself.

How does showing your post-pregnancy body make you feel?

It’s like: “Here you go, this is me.” I want to put across that being a mum is hard. Having two kids is really hard. And having a child with colic is a nightmare! Just being married is hard. Women are unreal. I don’t know how single mums do it – they’re superheroes. 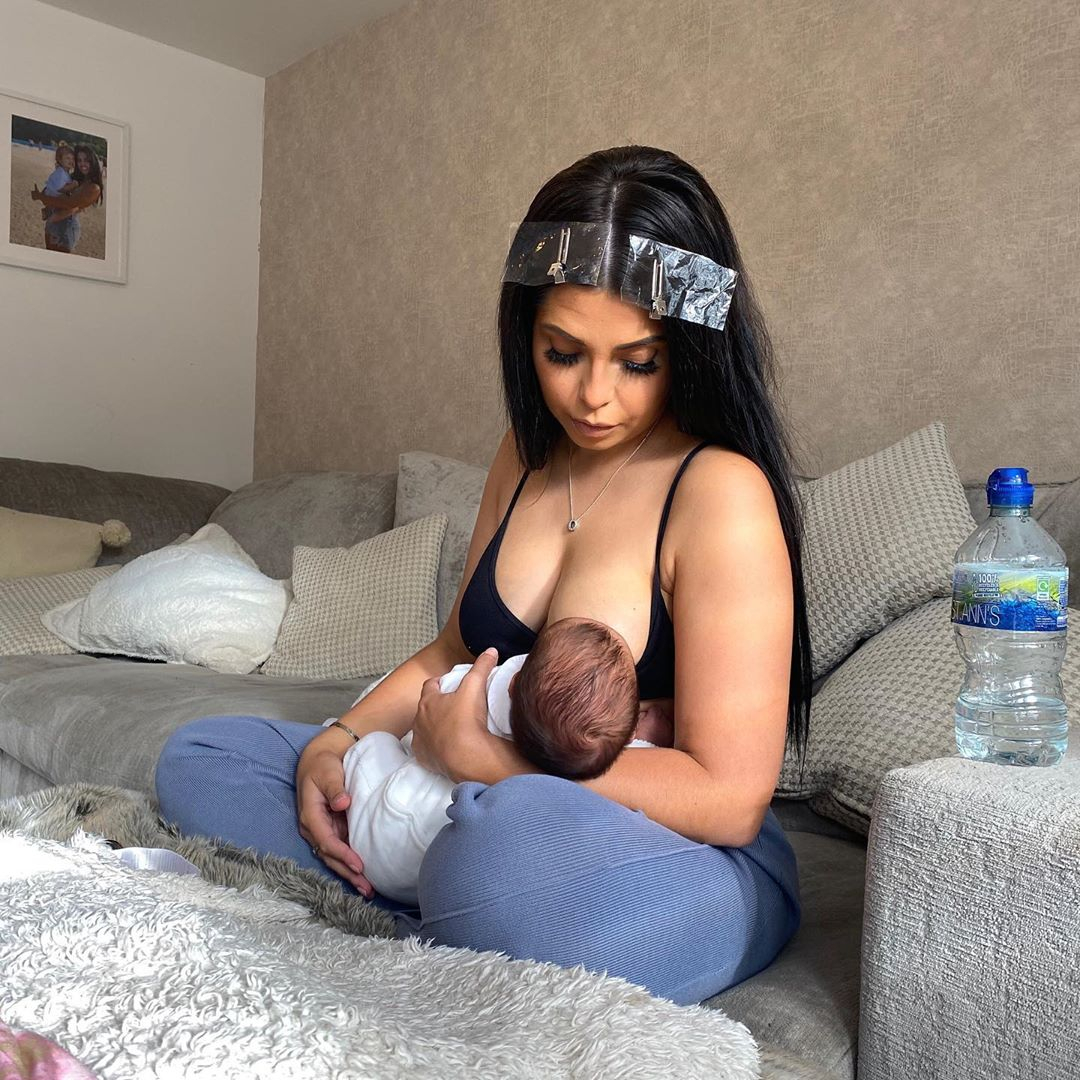 You’re breastfeeding Delilah after struggling with Fred – why do you think it’s working out this time?

It sounds really bad, but with Fred I’d have to sterilise and make his bottle and I couldn’t be bothered doing it this time! Luckily, Delilah really took to it and it’s amazing that I’ve not had to sterilise one bottle. And during the night, I feed her, she goes back sleep and I roll over to sleep, too. It’s made my life so much easier. I worried at first about everyone seeing my boobies when I was out.

But now I don’t care. We all have them! I squirted my boob at Nathan last week for a joke and the milk hit him and now Fred keeps saying: “Can I shoot Daddy with milk?” He thinks Mummy’s boobs are water pistols. Why did I do that?

How has Fred adapted to having a new baby sister?

He’s not been jealous, but he did regress a bit. He was wetting himself at nursery and his behaviour was terrible. I had so many days crying to Nathan: “Why have we had another baby? What have we done?” It was hard because Nathan works in London and sometimes I’d be putting Fred to bed by myself and trying to read to him with Delilah in my arms.

I felt so guilty because she’d be crying and I felt my time with Fred was being taken away. We make sure we’re both there for bedtime now. We aren’t in a great rhythm, but we’re navigating through it. 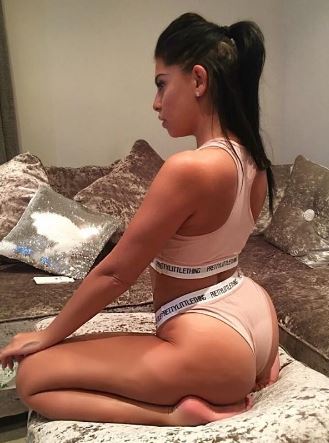 Before Love Island, Cara was a dancer and her body her commodity

Do you and Nathan still find time for each other?

We’re not even sleeping in the same bed because Delilah is in our room with me. Nathan sleeps in Fred’s room so he won’t get woken up and be a zombie at work the next day. I can’t remember the last time we were on our own. My libido’s gone anyway – I’m too tired.

You turned 30 in July – did that feel like a milestone?

I turned 30 in lockdown and I was eight months pregnant, so it wasn’t ideal! It made me think about my parents getting older. When you’re young, you think you’ve got forever.

Obviously Olivia [Buckland] and I were friends in Love Island but we hadn’t spoken since she got married [Cara was
sacked as bridesmaid and didn’t attend Olivia’s wedding].

When lockdown started, we got back in touch. We were such good friends before and now we’re back talking all the time and Alex and Nathan are chatting again, too. There’s no point falling out over stupid things.

Do you feel like your family is complete now?

I’m very lucky to have my boy and my girl. I’m glad that we didn’t leave a big gap. Never say never, but if I did have another one I’d wait till they’re at school. I’m going to get a five-year coil put in to make sure!