A MUM was mortified to discover the McDonald’s takeaways she’d not been charged for all year were accidentally being billed to her brother – and now she owes him more than £200.

Nicole Clark revealed to her family two weeks ago that ‘no wonder she wasn’t being charged’ for her Uber Eats orders since March as, unbeknownst to them, her poor brother Craig Clark was footing the bill.

Nicole Clark was left red-faced after realising that all of her McDonald’s orders for the year had been charged to her brother’s cardCredit: Kennedy News and Media

The mum-of-one had ordered £207.37 of McDonald’s takeaways accidentally using her brother’s card since before lockdown – without realising it was not linked to her own card details.

The pair only discovered the error when 31-year-old Craig came across Uber Eats transactions on his account and feared he had been hacked – changing all his passwords in a panic.

Nicole claimed the siblings had been craving a McDonald’s meal in March and created an Uber Eats account to order it, with Craig, 31, kindly putting in his details to pay for their food.

However when the 25-year-old began ordering herself more meals, she claims she didn’t spot that her older brother’s card that was footing the bill.

The former carer went into a ‘severe panic’ when she realised and immediately paid the full amount back to Craig – but luckily he found the mistake hilarious.

Nicole, who is the youngest of four siblings, claims she became the laughing stock of her family after revealing the error on their group chat.

Nicole, from Northampton, Northants, said: “My brother, bless him, told me not to worry. He was really fantastic about it. I said, ‘no, that’s my fat habits, that needs to be sorted’.

“He noticed the money had gone out first. I probably would have carried on ordering.

“He was checking his bank statements and he saw the Uber Eats logo and said, ‘I don’t have an Uber Eats’. He originally thought he had been hacked.

“He spoke to my mum and she said, ‘funny story, Nicole has ordered an Uber Eats and she hasn’t been charged’.

“When we went onto my Uber Eats account and went through my receipts, we realised what had happened.

“Uber Eats doesn’t tell you which card you’re using until it gives you your receipt and even then it still says ‘Apple Pay’. I presumed it was on my bank account.

“It never asks for a confirmation, it just clicks and goes straight through.

“Craig doesn’t have an Uber Eats account so when he went through his bank statements he wondered why he had ordered Uber Eats three times in November. It was me.

“In March, because he didn’t have an Uber Eats and we were craving a Maccies when it was announced on Uber Eats. He said he would grab this one and I could grab the next one.

“My brother was extremely relieved it was me, but also a little bit upset because he’d already changed his passwords.

“He was in such a panic he changed all his passwords straight away. He was more relieved that it was me and it wasn’t an outsider who had his bank details.”

Nicole immediately checked all her shopping accounts to make sure she hadn’t accidentally spent more of her brother’s money, but luckily Craig had only paid for her takeaways.

Nicole, who worked as a dementia carer, said: “I actually can’t explain how I felt when I realised. It was initially severe panic. I searched my Amazon, my eBay accounts.

“I was scared his card had linked to anything else by accident. Luckily it wasn’t and every Christmas and birthday present I had bought for my daughter had been paid by me.

“It did bring a lot of panic because I had to check every other app to make sure I hadn’t spent any more of his money. I still don’t understand how his card saved to my account.

“Initially it was a lot of panic and a lot of shock. We’re usually quite a jokey family so I got the absolute p**s taken out of me.

“I’m the youngest sibling of four, so when I put it on the family WhatsApp [they laughed].

“I don’t think I will link anyone else’s cards to my accounts again. My brother has downloaded the app for himself now too, so it can’t happen again.”

Uber Eats and McDonald’s have been contacted for comment.

It transpired that Nicole owed her brother over £200 Credit: Kennedy News and Media 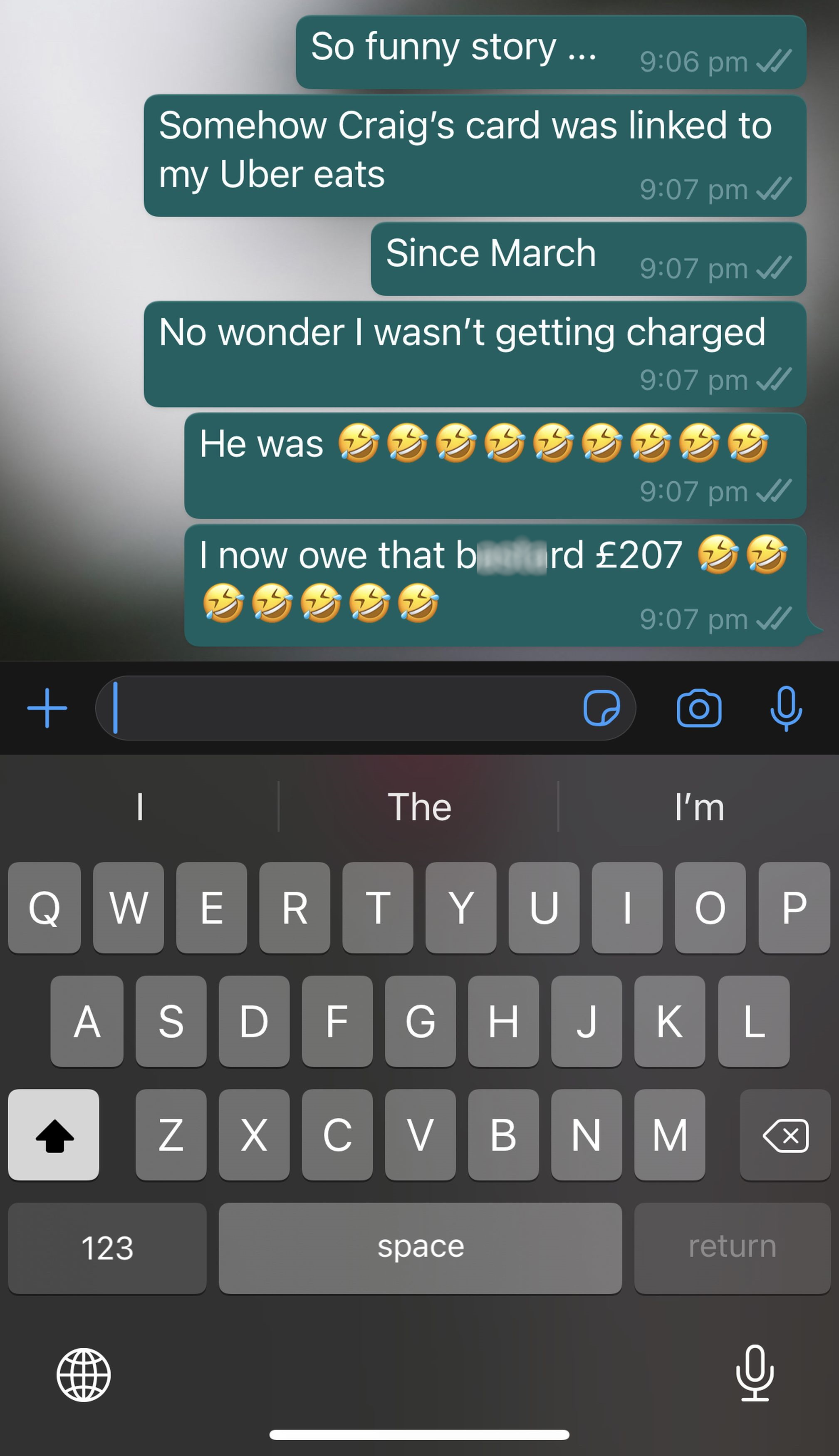 Nicole mistakenly thought she wasn’t being charged for any of the ordersCredit: Kennedy News and Media

In other food news, this hungry bloke was left devastated when his wife messed up his McDonald’s order.

And a hungover woman tailors her McDonald’s burger order & people can’t stop laughing when they see the result.

Meanwhile a McDonald’s worker lifts the lid on the secret behind their onions – and fast food fans are stunned.