THE NHS is due to get up to half a million fewer doses of Covid vaccine next week, it’s reported.

It casts doubt on the government’s target to vaccinate 13.2 million Brits in priority groups by February 15. 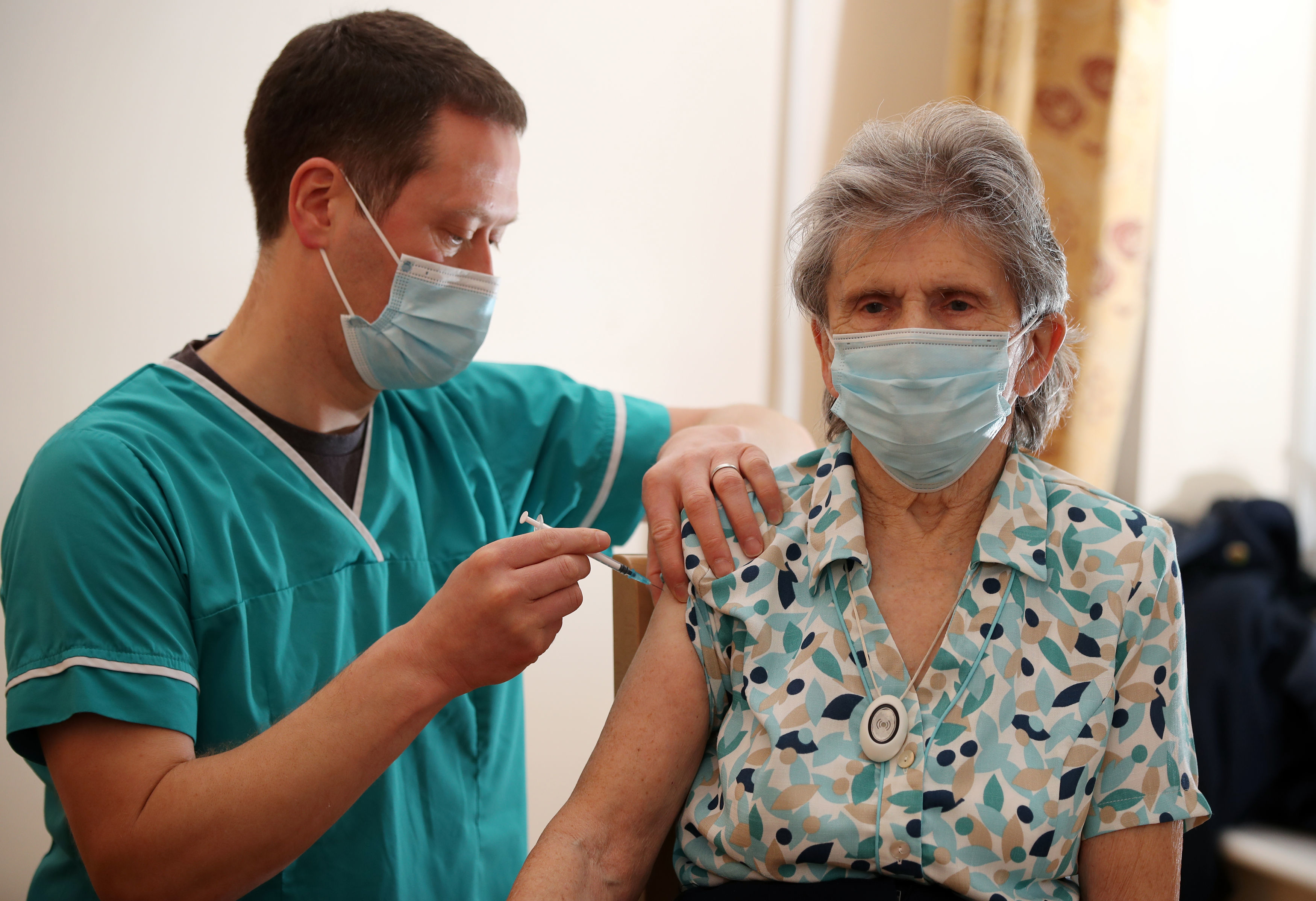 Supplies of the Pfizer vaccine are due to be slashed by up to 20 per cent next week as the UK faces a shortfall of 500,000 jabsCredit: PA:Press Association

Whitehall sources admitted to The Telegraph next month’s goal would be “tight”.

It comes after more than 400,000 Brits received a Covid vaccine dose on Friday.

Around 2.8 million vaccine doses were due to be delivered to the NHS next week, but the figure is set to be cut to around 2.3 million, government sources told The Telegraph.

Supplies of the Pfizer jab will be slashed by up to 20 per cent next week as the firm increases capacity at its Belgian factory to cope with worldwide demand, it’s claimed.

Ministers suggested supplies of the AstraZeneca jab were also behind track, with its predicted delivery of two million doses a week from the end of this month being pushed back until mid-February.

About 388,000 people need to be vaccinated on average every day for the mid-February target to be hit.

But only 328,000 people can be vaccinated each day if just 2.3 million doses are delivered.

Meanwhile, medical experts warned the mutant Kent strain of Covid is 30 to 90 per cent more deadly than the original virus. 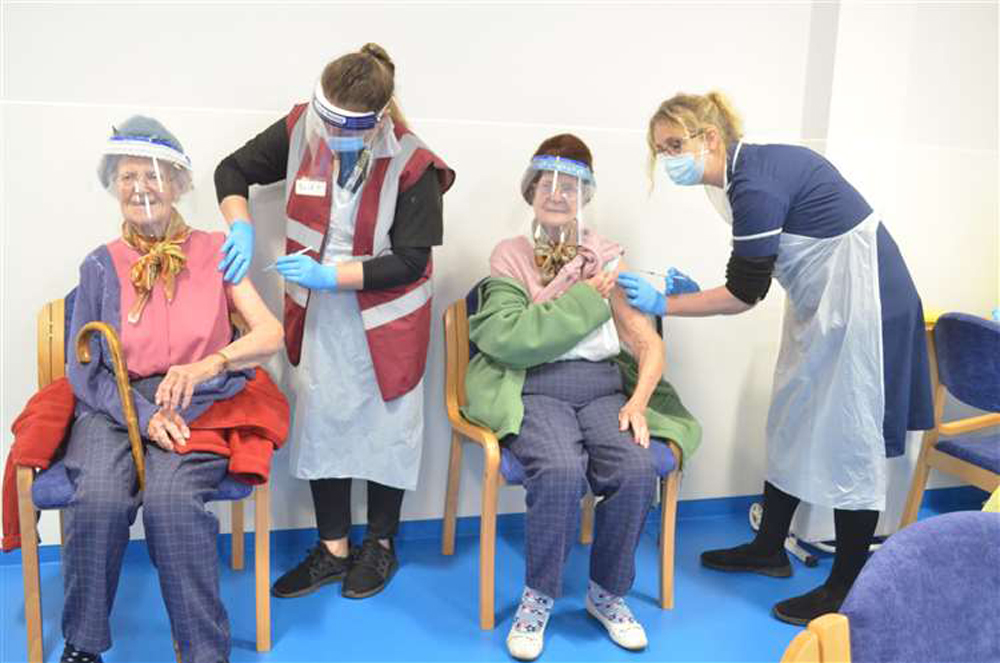 Despite the grim news, Britain was on target to hit its mammoth jabs target tonight with 285 receiving a dose every minute.

Official figures revealed 409,855 Brits got their first jab on Friday — taking the total to 5.4million nationally.

One in ten adults in England have now had their first dose, including 71 per cent of over-80s and 67 per cent of care home residents.

And The Sun can reveal another 33 new vaccination sites are to open across England next week.

‘PUT A ROCKET UP’

In another boost, total infections dropped by a third yesterday and the R-rate dropped to below 1 for the first time in five weeks. But deaths remain high at 1,401 yesterday.

Immunisation rates must stay at around 400,000 a day to meet PM Boris Johnson’s target of offering a jab to 15million people at highest risk by mid-February.

But the giant hubs will “put a rocket up” the immunisation effort by allowing the NHS to dole out tens of thousands more doses daily.

“We remain on track to reach our goal of offering a first dose to everyone in the top four priority groups by the middle of February.

A further 1,401 people have died with the virus 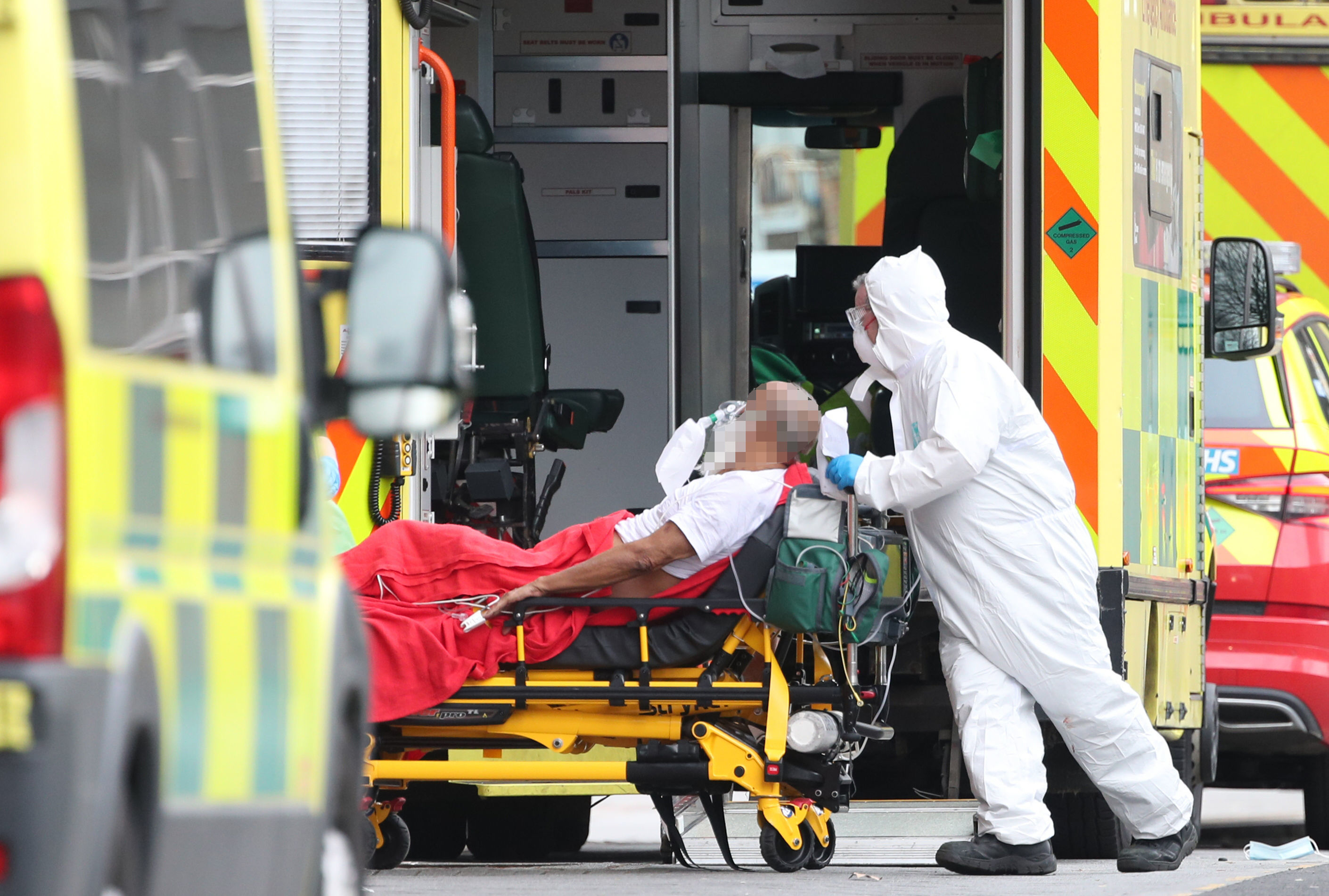 “I want to thank all the doctors and nurses, especially at GP-led sites who are vaccinating at a phenomenal rate.”

He added: “And I say to everyone, when that letter arrives, please don’t hesitate to book that appointment and get this life-saving protection.”

A Government source said capacity was continuously being ramped up but vaccination was currently being held up by supply.

The source said: “These new centres will put a rocket up our vaccine delivery efforts. As long as we can continue to get steady supplies we are on target to offer it to all in high-risk groups.”

Asked if jabbed people could mix, he said: “Over time the answer will be ‘Yes’ but at this point it is ‘No’. You should still be very cautious.” 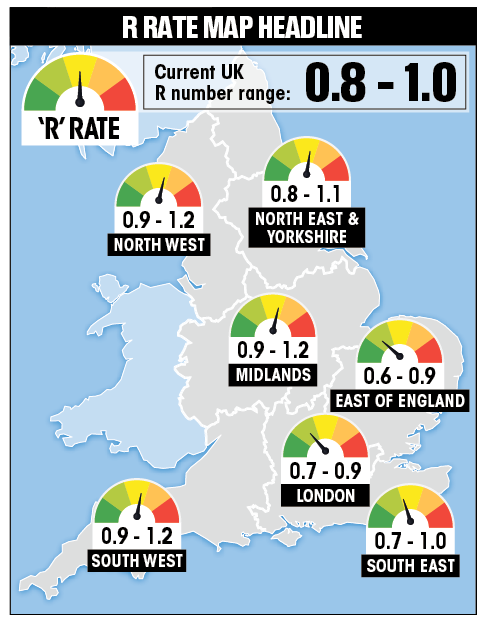 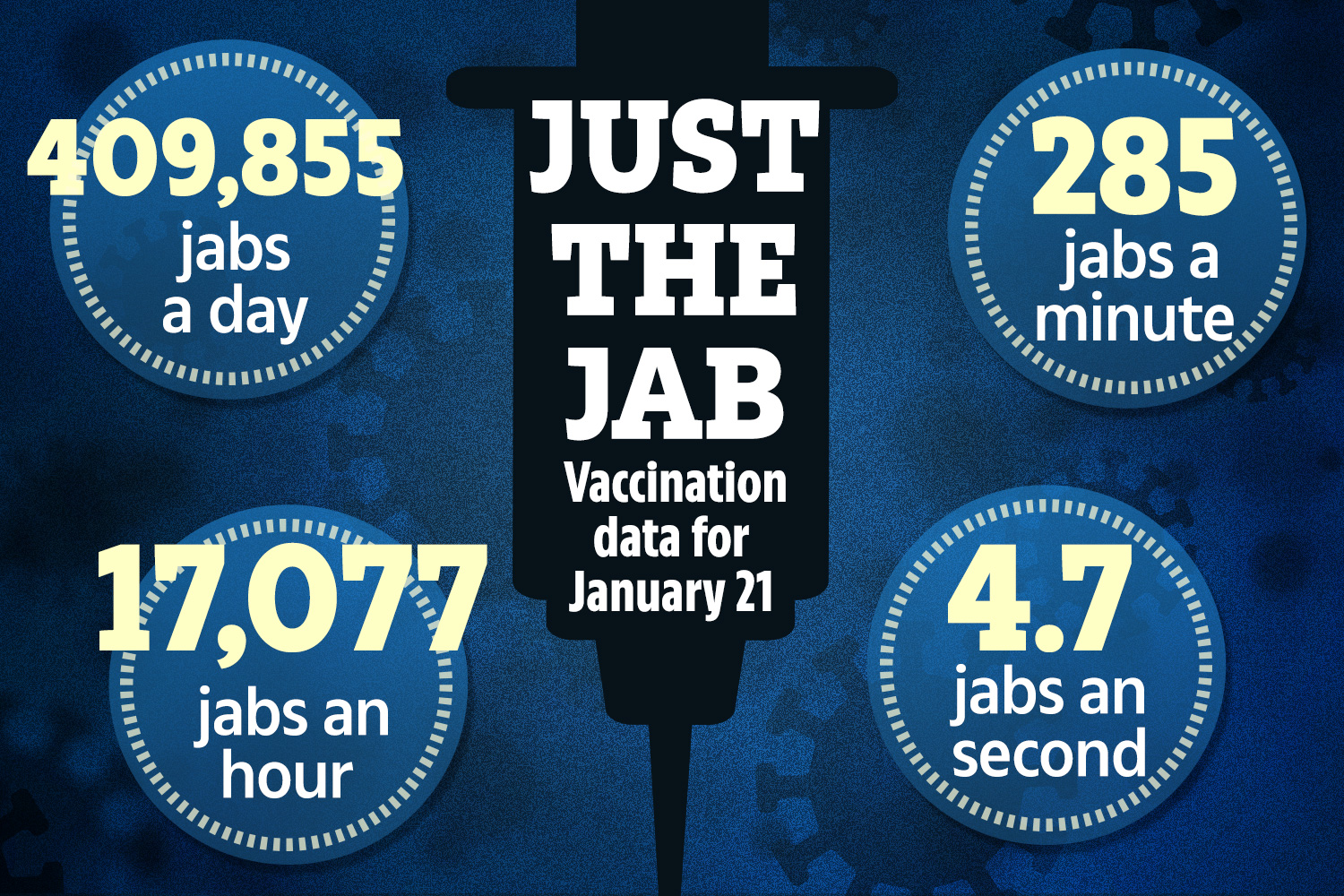 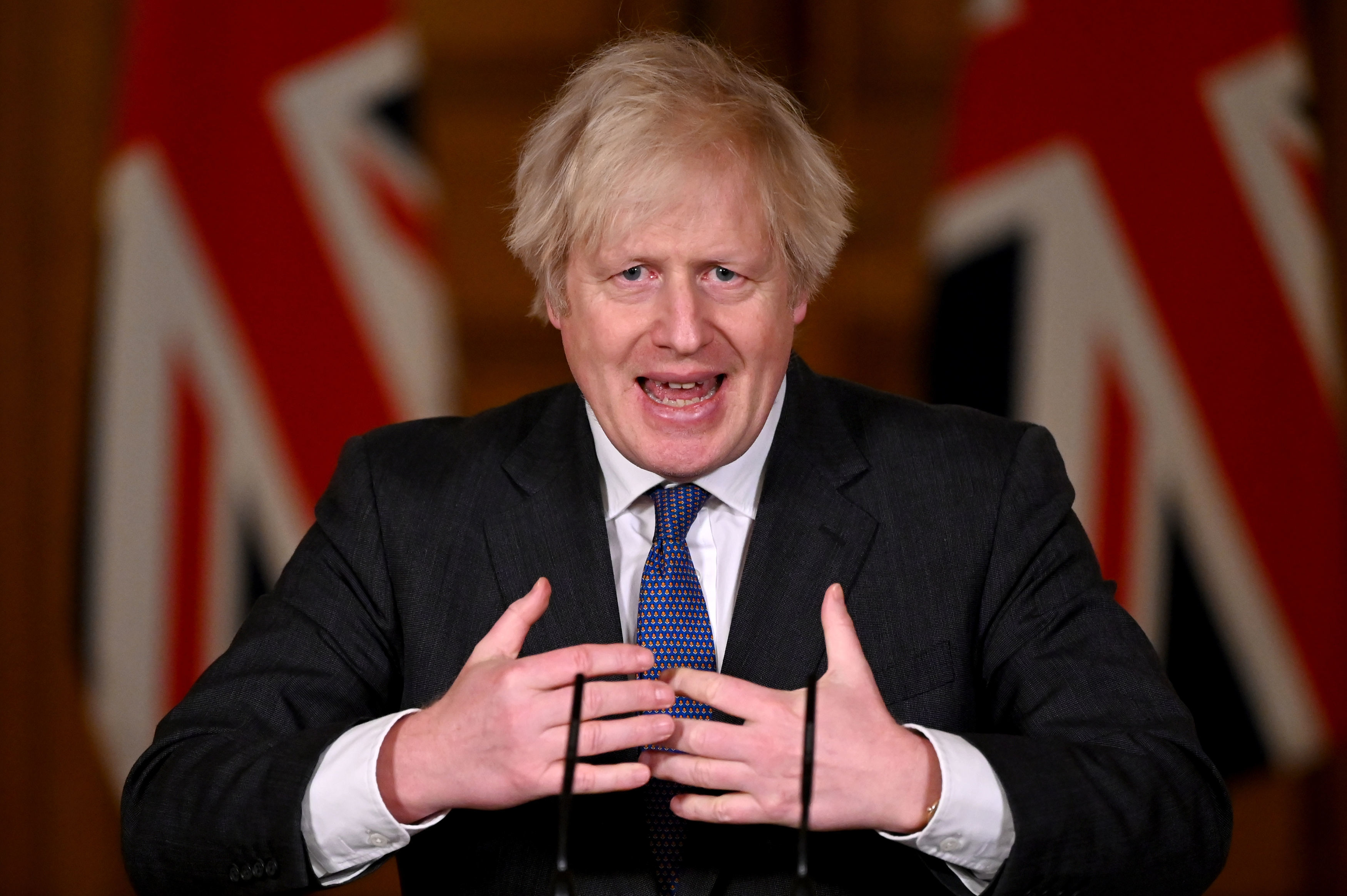 Immunisation rates must stay at around 400,000 a day to meet Boris Johnson’s targetCredit: PA:Press Association