WE get it – trying to convince your kids to help out around the house can be like getting blood from a stone.

So rather than continuing to pester her children, one savvy Australian mum decided to hide cash rewards in rubbish around the home – and parents think it’s “genius”. 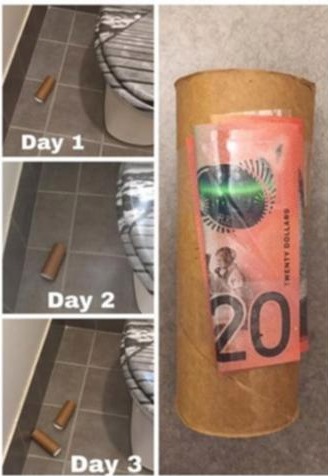 The mum hid a $20 dollar note in an empty toilet roll and put it back on the bathroom floorCredit: Facebook

Posting on the Facebook group Mums Who Clean, the woman explained how she stuck $20 [£20] inside an empty toilet roll as a “finder’s keepers” prize.

However, it did take a while for her husband and kids to catch on – and the piece of cardboard remained on the bathroom floor for days on end.

Needless to say, other members of the group have now decided to try the chore trick in their own homes.

She also put a $5 note under a scrap of paper as a ‘finders keepers’ prizeCredit: Facebook

Another added: “This needs to be shared with the world!”

Meanwhile, a third joked: “My kids would probably pick it up, take out the money and throw it back on the floor and run around yelling excitedly!”

Last year, we revealed how another mum ‘bribes’ her sons to make beds, sweep kitchen & ‘do homework without complaining’ with reward board stuffed with money.

For more parenting stories, this mum was left gobsmacked after baby is born with a full head of blonde hair after her husband was adamant he’d be bald.

And this mum called for Bunchamals to be banned after they get stuck in her daughter’s hair – and others have reported a similar problem.

Plus this mum-of-five ditched nappies and just holds her babies over the loo or sink when they need to go.