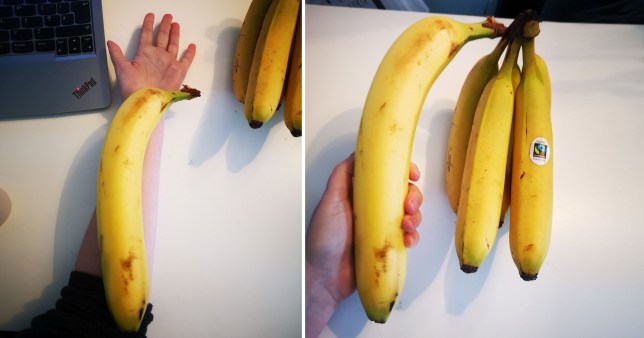 As Sam Palmer put the family grocery shop away, she spotted something out of the corner of her eye – a huge banana.

The fruit was about a foot-long and Sam thought it was hilarious.

Her mum Paula had bought it at Morrisons but hadn’t noticed how big it was compared to the others.

Sam snapped a few pictures with it before taking a bite, declaring it the best one she’s ever eaten.

‘It was double, if not triple the size, of the ones I already had [in the house]. It was about 12 inches long in total. 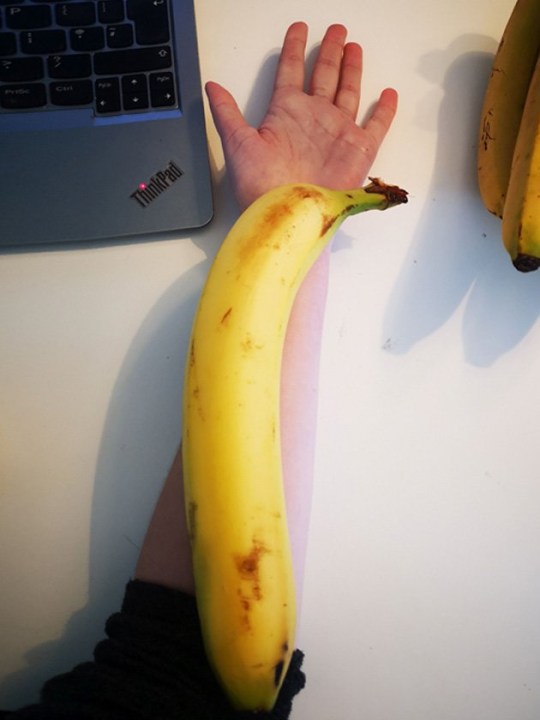 Measuring it up against her arm (Picture: Kennedy News & Media)

‘It tasted really good, it was better than the little ones I had. It’s the best banana I’ve had in my life.’

The merchandise assistant’s mum Paula, 65, popped to the Locking Castle branch of Morrisons in Weston-super-Mare on Thursday lunchtime.

Oblivious to the huge banana she picked up, Paula only realised what she’d come home with as Sam looked through the shopping and they made the bombshell discovery.

Sam said: ‘I’m living at home at the moment and my mum came home with it.

‘I remember asking her “what is that?”, it just made me laugh. My mum said she hadn’t noticed it was that big.

‘I’m trying to eat better at the moment so I’ve been eating bananas every morning and I think she just probably saw them and picked them as she was out.

‘I thought “I’ve got to take pictures of it”. I already had some bananas as I’d bought my own so I thought I’d compare the two.’

After enjoying the taste of the huge fruit, Sam and her mum are now on the look out for more like that.

Sam said: ‘I ate the majority of it in one go. I’d already eaten one in the morning, I must have been way over my potassium limit.

‘It’s the tastiest banana I’ve ever had, I might have to put a word in with my mum to make sure she keeps her eyes peeled for other big bananas too.’