The offer is valid on the supermarket’s Heat & Enjoy range, which includes 31 dishes ranging from chicken chow mein to Indian tikka masala. 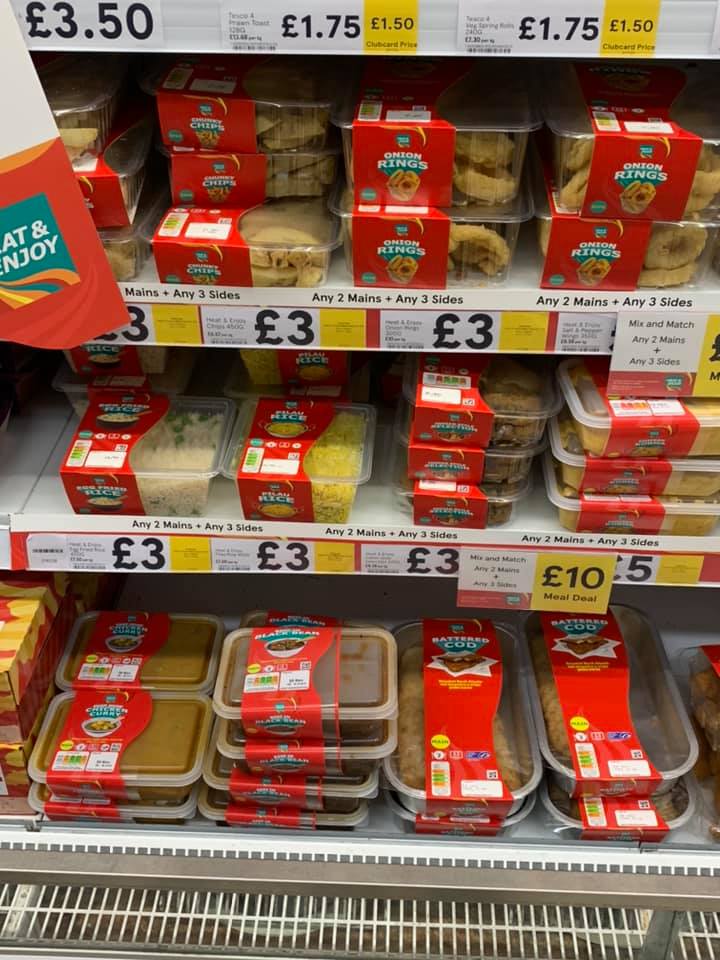 Each main from the range usually costs £5, while shoppers can pick up sides for £3 each.

In other words, two mains and three sides would typically cost you £19, so you’ll save £9 thanks to the offer.

The deal was spotted by a shopper in the Extreme Couponing and Bargains UK group, who wrote: “So this caught my eye in my local Tesco on Wednesday.

“It went down great with mum and I for today’s dinner.”

THE offer is valid on the supermarket’s Heat & Enjoy range, which includes the below on Tesco’s website.

Sides and desserts – usually cost £3 each

The post has racked up plenty of comments from other shoppers, with one user tagging her friend and saying: “These look good.”

While a second added: “I had the Chinese ones. They were lovely. Good portions and very tasty.”

And a third one said: “Omg I got this tonight. I had curry and 2 sides and my OH had the 2 burgers wedge-shaped and salt and pepper chicken wings [sic].

“It was nicer than the fancy burgers we got from a local restaurant/takeaway that cost us £20.”

Other shoppers also pointed out that Tesco Express stores are currently doing one Heat & Enjoy main and two sides for £5.

Tesco told The Sun the deal is available in a majority of its larger stores, so it may be worth giving your local one a ring before making the trip.

The supermarket has more than 3,700 stores across the UK. You can find your nearest one by using its store locator tool.

The offer is also listed on Tesco’s website for online shoppers, although keep in mind that home delivery costs £4.50 and there’s a £25 minimum spend.

The newly launched offer is valid until March 9, 2021, so there’s plenty of time for shoppers to take advantage of it.

In comparison, Asda is doing a Chinese ready meal bundle with two mains and two sides for a cheaper £9.25.

Or if you’re watching over your waistline, Morrisons is selling two Weight Watchers ready meals for £3, or one for £1.75.

In January, M&S made a huge blunder for the Chinese New Year by offering a deal on Indian food.

And more recently, a Tesco glitch sparked a huge meal deal saving with one shopper’s lunch costing 4p instead of £3.