The Kardashian Effect! These celebrities proving whatever the Kardashians do they can do better in these Instagram poses

WITH a combined following of over 850 MILLION people, there’s no denying that the Kardashians rule Instagram.

Even if you’ve never seen an episode of their hit reality show, chances are you will have come across Kim, Kylie, Khloe, Kourtney or Kendall striking a pose somewhere on your social media feeds. 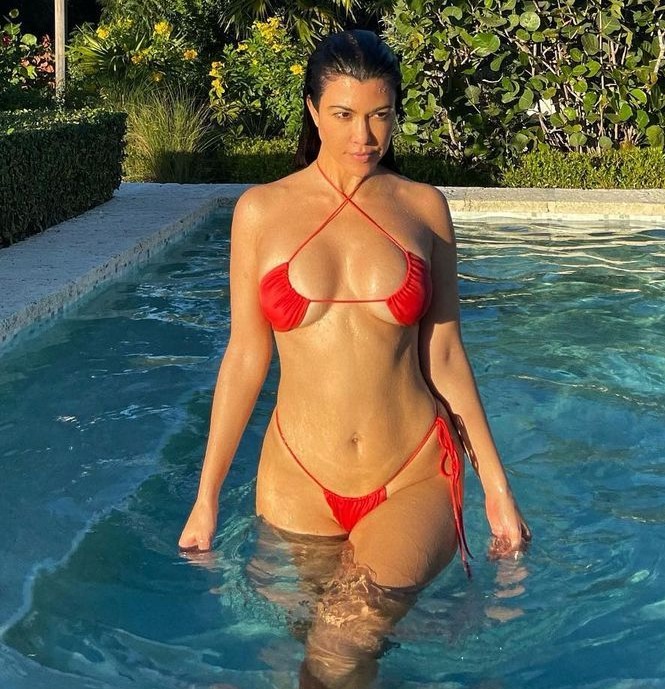 And we can’t deny it – we’ve shamelessly tried to “keep up with the Kardashians” in the past by either copying Kim’s short bob or Kylie’s killer nail art.

But it turns out, we’re not the only ones.

Here Fabulous takes a look at the all the celebs taking inspiration from the Kardashian’s iconic Instagram poses – and they’re guaranteed to rack up the “likes”.

No, Kourtney and Kylie haven’t put their bikinis on the wrong way by mistake – it’s actually the height of fashion right now.

Certainly not one for the faint-hearted, this daring trend flashes a whole lot of under-boob while also giving your cleavage a bit of a lift.

Since the sisters rocked the trend earlier this year, influencers Tammy Hembrow and Arianna Ajtar posted almost identical pictures of themselves in itsy-bitsy bikini tops too.

Kylie has kicked off multiple Instagram trends – including the ‘Boob Grab’

She might be the youngest of the Kardashian sisters – but Kylie has the most followers of all her siblings.

With this in mind, it’s hardly surprising that Kylie can kick off an Instagram trend in a single post.

After posting a photo of her clutching at her chest last year, stars such as Zara McDermott and Chloe Ferry were quick to jump on the bandwagon.

The Kardashians brought the bandana trend back

Let’s be honest, we can’t imagine any other celebs who would’ve been able to make 1990s bandanas cool again.

Last year, Kourtney and her pal Addison Rae were pictured chilling out in the sun with matching multicoloured hair accessories.

Unsurprisingly, Love Islanders Molly-Mae Hague and Kady McDermott and Teen Mom’s Farrah Abraham followed suit in near-identical pictures of themselves on holiday in their headgear.

Before the days of Instagram, carpools were just something parents did to cut back on petrol – but thanks to the Kardashians, they’re now a great photoshoot opportunity.

Kylie is often pictured posing behind the wheel of her car or standing in front of it – which has inspired stars such as Joanna Chimonides, Zara McDermott and Chloe Ferry to do the same.

Kylie [pictured far left] kicked off this trend too

When you’ve jetting out for a week in the sun, it’s always a good idea to bring a sunhat.

But while on holiday last year, Kylie didn’t pack much else and posted a very sexy selfie of her using the hat to cover her modesty.

And needless to say, it wasn’t long before Summer Monteys-Fullam and Cara de la Hoyde followed (without a) suit.

If the Kardashians are to believed, then every waking moment of your life is a photo opportunity – and that includes simply walking up the stairs.

As Kylie proved on holiday, this is a super flattering angle for your bum – and Zara McDermott and Anastasia Karanikolaou took note.

The upside-down bikini isn’t the only swimwear trend the Kardashians have kicked off.

The post prompted Love Island’s Ellie Brown to buy the same costume while Eve Gale also gave it a go.

So Rose from Titanic might have been the inspiration behind this pose – but Kylie turned it on its head (literally) by facing the other way.

During our school days, we basically couldn’t pose for a photo without awkwardly whipping out the peace sign.

But little did we know that 10 years later, Kim Kardashian would bring it back into the mainstream – and now it regularly pops up on Montana and Ellie Brown’s feeds too.

For more celebrity stories, this is how Zendaya went from Disney kid to one of Hollywood’s biggest stars while fighting for equality.

And Love Island’s Maura Higgins and Chris Taylor opened up about their amazing sex life with Fabulous magazine.