CAPITOL rioters are now getting turned in to the FBI by some creative women matching with them on the Bumble dating app.

Realizing how many conservative men were on the app with photos of themselves at the failed coup attempt on January 6, some women have taken it upon themselves to match with them and send their information to the FBI.

A Twitter user in DC discovered plenty of people in her area who attended the failed coup attempt on January 6Credit: Twitter 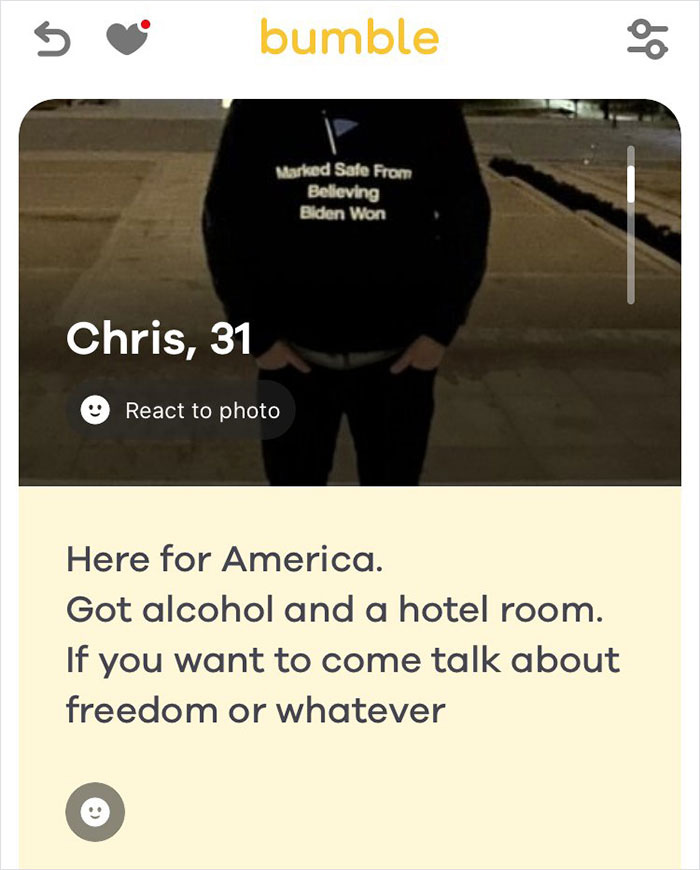 People soon began finding far-right supporters of the President in DC for the riotsCredit: Bumble

“This is funny but actually serious. There are DOZENS of men on DC dating apps right now who were clearly here for the insurrection attempt yesterday,” wrote Alia Awadallah on Twitter. “Some say it directly, others are obvious from MAGA clothing, location tags, etc. Is that info useful at all for law enforcement?”

She continued, saying dating apps update automatically depending on location, meaning she was able to see who was in DC during the week’s events.

“It’s funny how obvious it is when people aren’t local. My app went from real estate agents, accountants, and contractors to…none of that,” she joked.

It seemed like some women took that opportunity to match with far-right supporters of the president who were present for the Capitol riots. 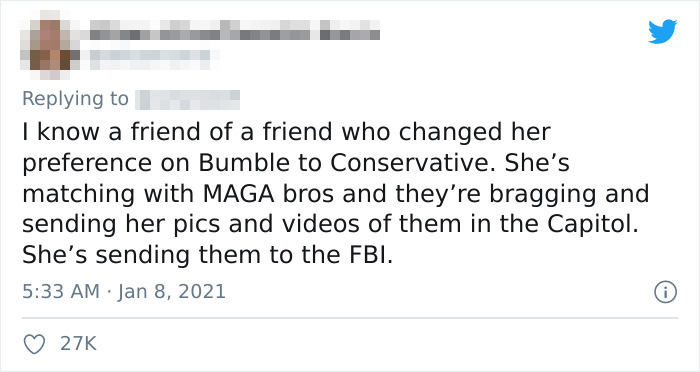 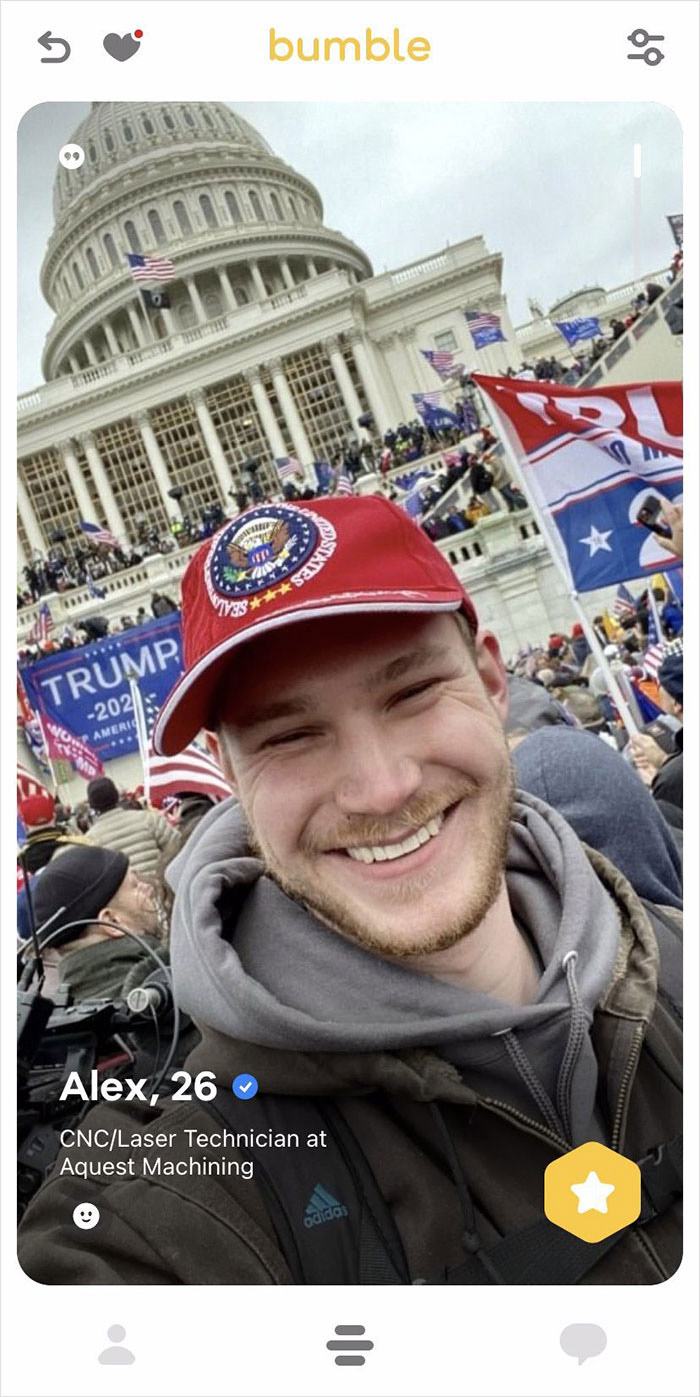 They then began reporting individuals with photos of themselves at the riots to the FBICredit: Bumble

Replying to Awadallah, user Allison Norris wrote “I know a friend of a friend who changed her preference on Bumble to Conservative. She’s matching with MAGA bros and they’re bragging and sending her pics and videos of them in the Capitol. She’s sending them to the FBI.”

A Washington Post reporter then posted a screenshot of a man on Bumble showing a photo of himself in DC. The reporter, John Hudson, captioned the photo “One of my female DC friends scrolling Bumble tonight.”

In the photo, a man named Chris is seen wearing a sweatshirt reading “marked safe from believing Biden won.”

Chris captioned his profile “Here for America. Got alcohol and a hotel room. If you want to come talk about freedom or whatever.”

Someone else posted a photo of a man named Alex who is pictured at the failed coup attempt. The Twitter caption read: “With a @bumble pic like this, is it any wonder why Alex is single?” 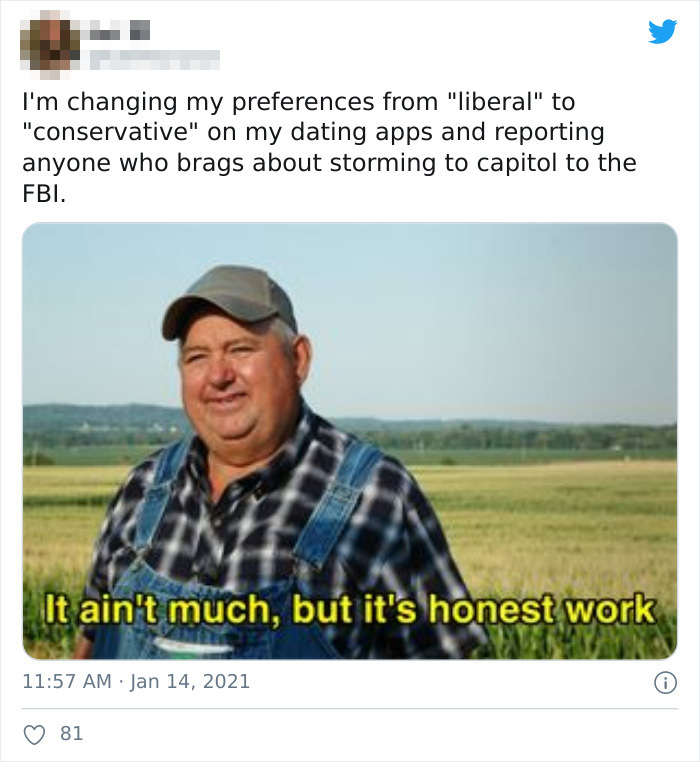 More people began doing the same, joking it was their civic dutyCredit: Twitter

Bumble has since removed the political affiliation optionCredit: Twitter

More entrepreneuring individuals have been hopping on board, saying they were sending the FBI the dating profiles of those seen at the protests.

“Swiping through dating apps to see if any guys have pictures of them at the capitol so I can send it to the FBI. It’s my civic duty,” wrote one user.

“I’m changing my preferences from “liberal” to “conservative” on my dating apps and reporting anyone who brags about storming to capitol to the FBI,” wrote another.

This then led Bumble to remove its political affiliation option on its platform.

“Bumble, what happened to the political affiliation filter?” asked a user.

In response, the dating platform said “We have temporarily removed our politics filter in the U.S. to prevent misuse. Don’t worry; it will be reinstated in the future.”

And when someone asked how reporting insurrectionists was misuse, Bumble responded: “Rest assured that we prohibit any content that promotes terrorism or racial hatred, and we’ve already removed any users that have been confirmed as participants in the attack of the US Capitol.”