TO GET the perfect lashes, there’s usually no treatment we wouldn’t try, but after seeing one woman’s botched extensions job that has been described as “the worst ever”, it may have you reconsidering.

A beautician was left horrified when a client came to her for help after being left in so much “pain and discomfort” when she had what she thought were semi-permanent extensions added to her natural lashes.

A beautician was left horrified over client’s botched false lashes job that left her in painCredit: TikTok 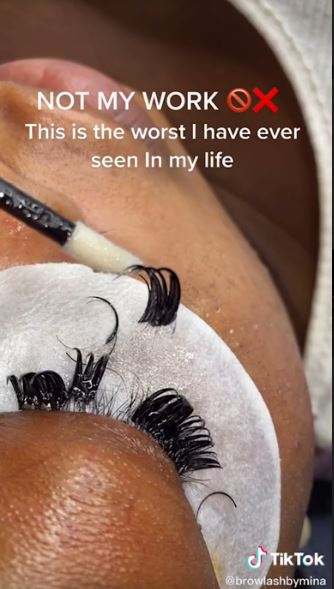 She called the lash job the “worst I have ever seen in my life”Credit: TikTok

TikTok user @browlashbymina shared a video of her removing the botched extensions and revealed it took her an HOUR in total to rectify.

They explained the client had her lashes done in a salon and urged other beauty fans to “not be fooled” as she revealed the extensions were not semi-permanent like her client was led to believe.

“This is the worst I have ever seen in my life,” the beautician said.

In the footage, they could be seen trying to ease the clumpy extensions away from the client’s natural lashes.

Issuing a warning to others, they captioned the video that has since been watched over 71k times online: “Omg please be careful in where you go for your lashes. #worstlashesever #wronglashes”

Viewers were keen to know more and asked the beautician to share a follow-up video.

They wanted to know whether the client was able to have her lashes redone or now needed to take a break from other treatments.

It’s not the first time beauty fans have been warned of the dangers of eyelash extensions if they’re not done properly.

One beautician was seen calling out one client’s botched job, after she realised her extensions were stuck on using hair bonding glue and had been falsely advertised.

They vented: “It’s so sad to be in 2021 and people are still preforming work like this and listing it as ‘eyelash extensions’.

“These are not eyelash extensions! They are cluster lashes bonded with hair bonding glue! Extremely damaging! 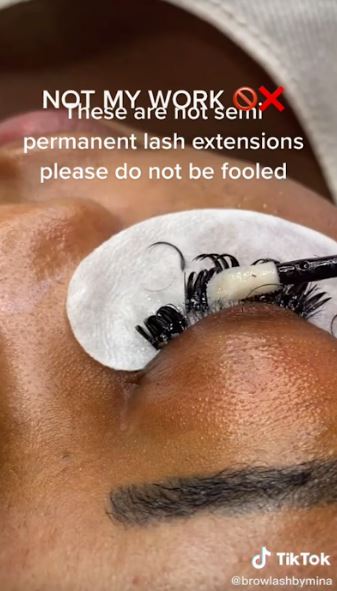 The beautician urged beauty fans to “be careful” when getting their lashes done and revealed the extensions took an HOUR to removeCredit: TikTok

Meanwhile, this teen’s botched eyelash extensions saw her hospitalised after lashes were glued INSIDE her eye.

Plus, one girl was left furious after splashing out £60 on botched lash extensions which look like ‘toddler stuck on pieces of string’.

And one woman was left in tears after forking out $1.2k for the hair extensions of her dreams in a salon appointment gone wrong.

Beautician warns women to NEVER use eyelash curlers as she shows off client’s stunted, blunt lashes