GETTING a new piercing can be pretty daunting, so you’d want to make sure the person doing it gets it right.

But after getting her belly pierced in New Jersey, US, this woman noticed it’s in the wrong spot entirely and claims the piercer completely missed her belly button.

The woman reckons the piercer pierced the wrong spotCredit: TikTok/@tyykidd 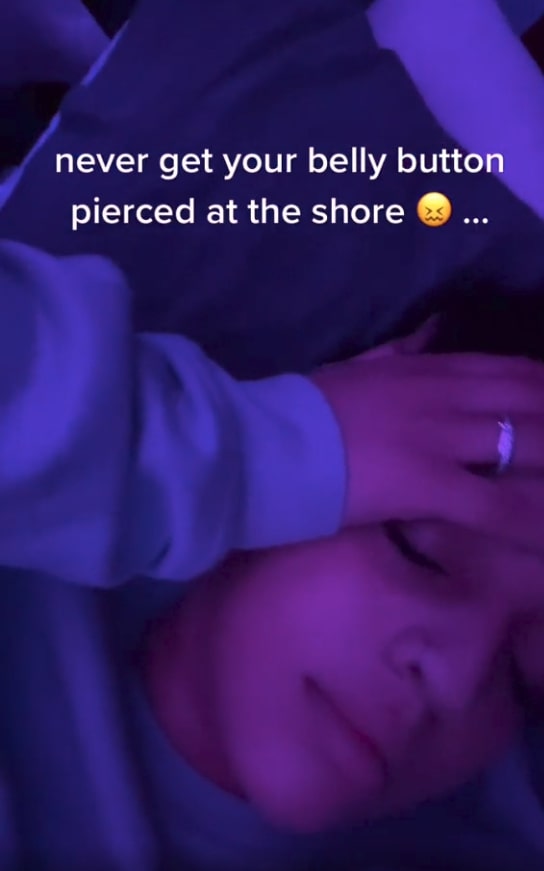 She fumed in a clip she shared on TikTokCredit: TikTok/@tyykidd

Posting on TikTok under the name Tyykidd, the New Jersey local fumes as she shows off the new look which she dubbed it “the worst mistake ever.”

“Never get your belly button pierced at the shore. Worst mistake ever,” she wrote on the screen before showing off the metal bar which was well above her belly botton.

“They missed the whole belly button,” she said. “I want a refund for my time, money & FEELINGS.”

Despite her rant, many people reckon it wasn’t a mistake a all and pointed out that she has a tiny belly button which is probably why the end of the bar doesn’t sit within it.

“Girl, It’s because you barely have a belly button,” one person commented.

While a handful of others said their own piercing looks exactly the same.

Not convinced, the 21-year-old shared a follow up clip to “prove” that she “has a belly button” and that the position was definately a mistake.

“I have a belly button the motherf***** just missed,” she fumed before revealing that she went back to the store to complain.

Loads of people also reckon it was her fault to begin with as it’s normal for them to draw dots on the skin to mark where the piercing would go.

Girl, It’s because you barely have a belly button.

“Aren’t they supposed to ask if the spots are ok with you first?”one person asked, and many others agreed.

Responding to the comments, she claimed the did but the “didn’t pierce where the dots were.”

Others continue to claim the position was completely normal and that she had nothing to worry about.

Meanwhile, this mum was left gobsmacked when she’s charged £68 for her daughter’s ear piercing at Claire’s Accessories.

Plus this woman said: ‘I got stuck on top of a man when his willy piercing got caught inside me – we had to wiggle around until we were freed’

And this mum raged online after her ex-partner pierced their 9-week-old daughter’s ears without telling her.