A BOSS has gone viral for his response to a struggling mum who asked to switch to part-time work during the pandemic.

Aaron Genest, an applications engineer manager at SaskTech, took to Twitter where he shared one of his employee’s requests. 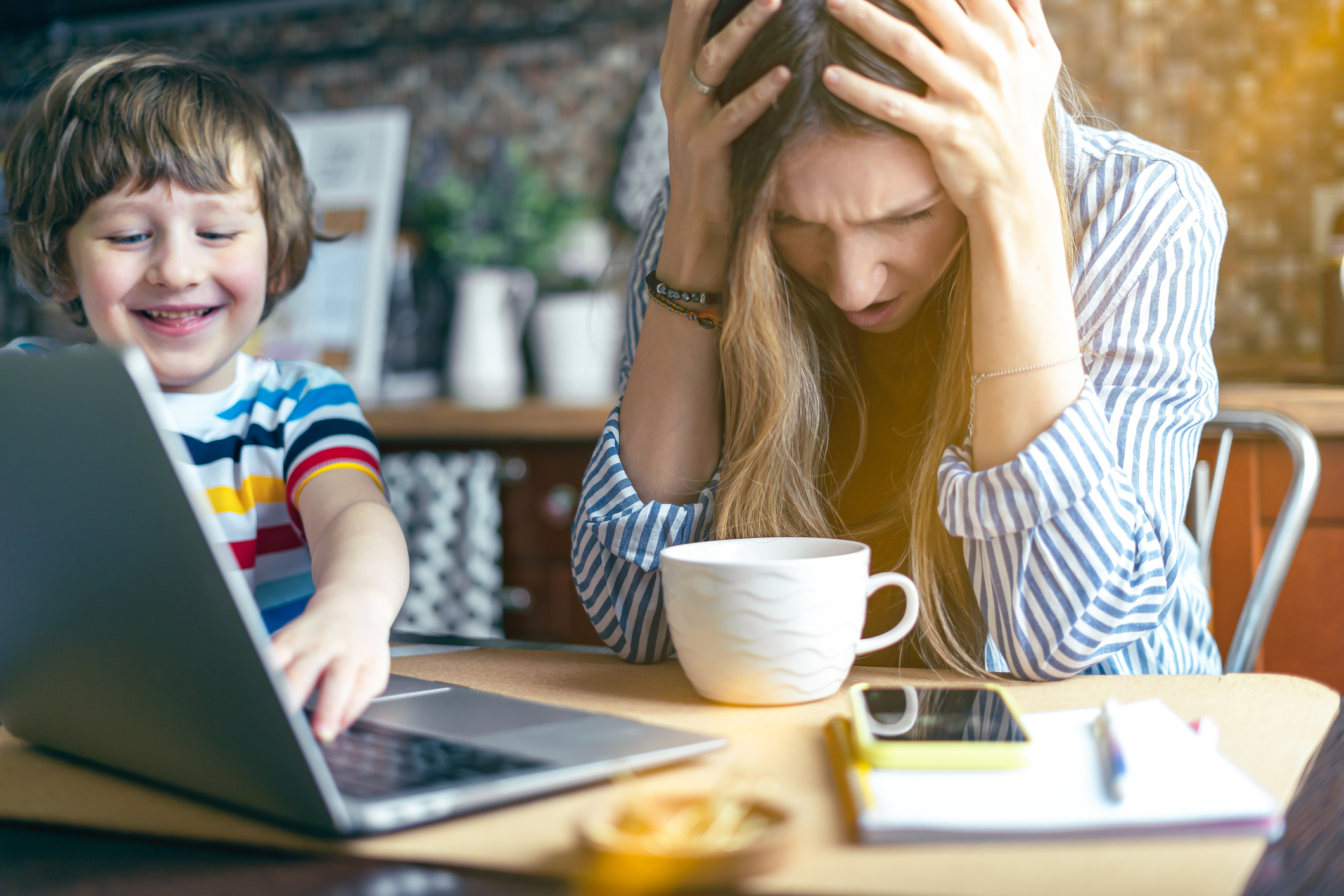 The mum asked her boss to cut down her job to 80 per cent time as she struggled to balance homeschoolingCredit: Getty Images – Getty

“An employee came to me last week and asked to move to 80% time,” Aaron wrote.

“Her husband, she said, was taking on some extra responsibility and they were having trouble keeping the kids on track during remote learning. I said no.”

While this may seem unreasonable, Aaron had good reason his reponse.

He continues: “Women in the workplace have been disproportionately affected by COVID, erasing decades of gains. 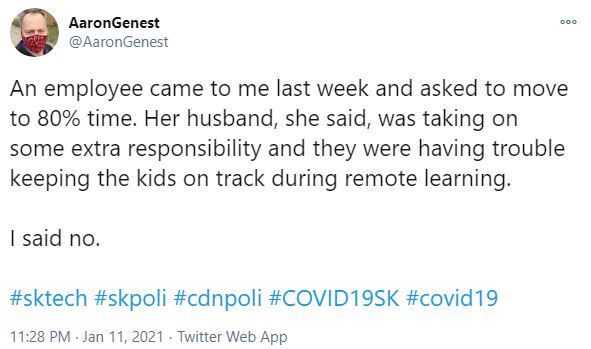 “And it’s easy to see why when women typically earn less (even for the same jobs) than their partners.

“Every reason my employee gave was valid and rational (we hire great people), but the base assumption was wrong. The assumption was that we should expect the same thing of our work lives now in terms of productivity and time commitment that we did with pre-COVID.

“I have a high-performing team who outperformed themselves again this year, outperforming almost every other team in my company in fact and winning awards for it. They did it with kids at home, with COVID isolation, and with increased stress and loneliness. 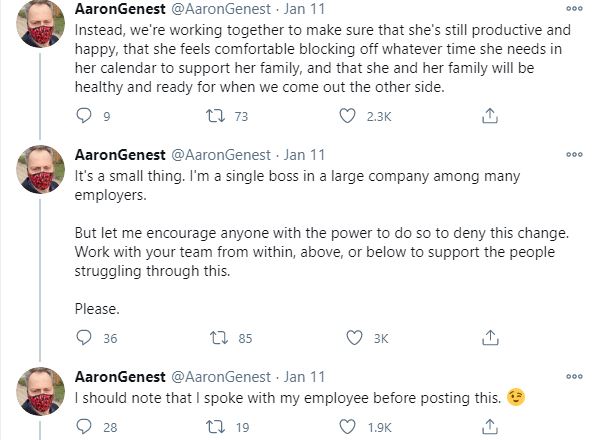 He revealed that he is instead working with her so she can block out “anytime she needs”Credit: Twitter

“When someone has to leave to pick up their kids, someone else covers. When a two-year-old bounces into a business call, they smile and everyone understands. When a day is less productive because they can’t stand staring at the walls anymore, they get out so the next one is better.”

Aaron told the woman no so that she didn’t have to sacrifice her career or her financial future just to survive with her mental health.

“No, you can’t become one of the women earning less because of COVID,” he said. “No, you can’t sacrifice your career advancement because of a perceived lack of productivity. No, you don’t need to feel guilty about taking the time to make sure your kids are learning.”

And instead, he took the best possible approach.

“We’re working together to make sure that she’s still productive and happy, that she feels comfortable blocking off whatever time she needs in her calendar to support her family, and that she and her family will be healthy and ready for when we come out the other side.”

This article was originally published on Kidspot and has been republished with permission.

In other news, this woman is sick of mums complaining about homeschooling, she says they chose to have kids.

And this mum left her kids at home while she jetted to Dubai so that she could homeschool in paradise.

Plus this mum who can’t be bothered to homeschool her teen wants her I to be a TikTok or Love Island star instead. 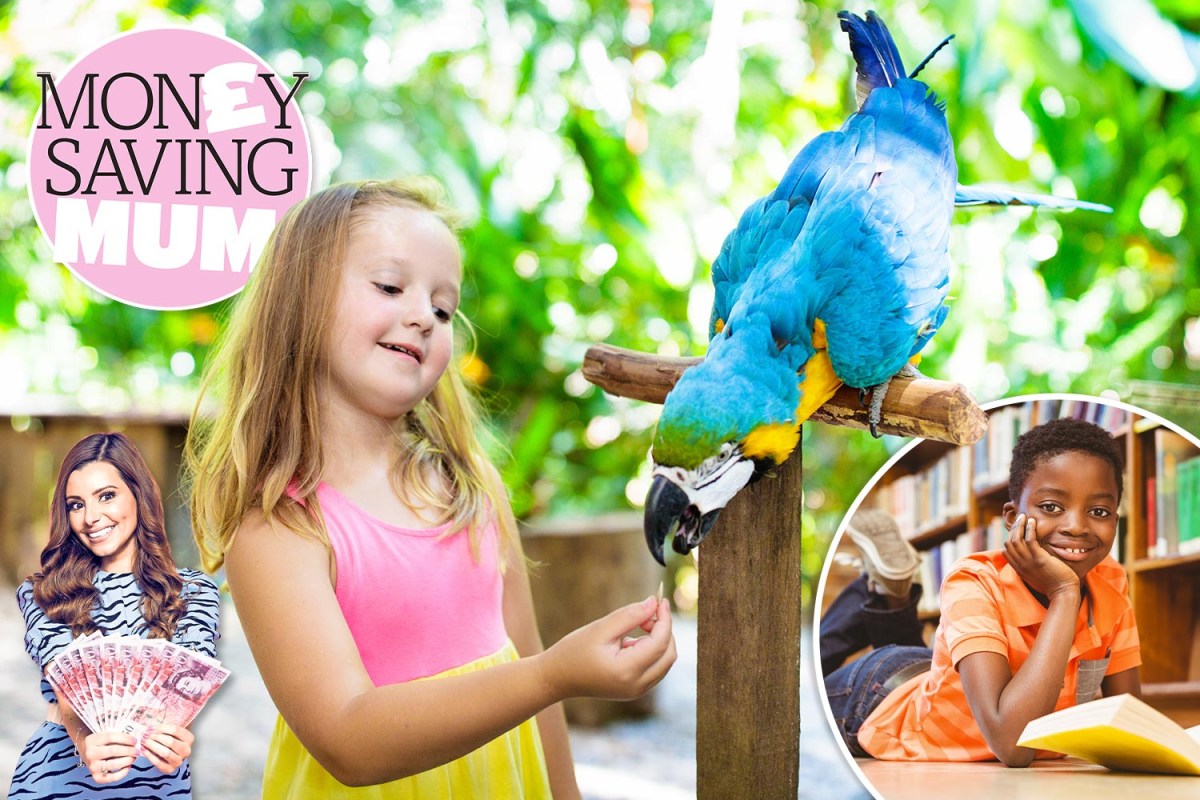 KEEPING kids entertained over the summer can see family budgets go out the window. It costs £127 a week to...

I waxed my five-year-old daughter’s unibrow so she’d feel pretty, my husband is furious but I won’t have her bullied

I’m a lazy parent – I don’t play with my daughter, one, she has a double bed instead of a cot & I’ve ditched baby gates

Woman Calls Out Her Sister For Failing At Homeschooling Her Kids, Family Drama Ensues