THERE are few people who actually enjoy doing laundry so when this mum-of-six showed off her mammoth washing pile, parents were extremely sympathetic.

The Australian mum currently has six kids at home during lockdown while she and her husband are working from home – and the work certainly never stops when you have such a busy household.

The mum-of-six shared a snap of her laundry pile which completely covered the entire roomCredit: Facebook

Fed up and exhausted, the busy mum forced herself to catch up on laundry after letting three days of clean clothes pile up.

She revealed that she does a huge load of washing every single day, and usually folds them right away, but on this occasion she’d left it.

This left the busy mum with a mountain of clothes which completely covered her bedroom floor as she sorted the clean clothes into five different washing baskets.

“Just sharing my Saturday night fever. When you have six kids and two working adults at home and just the three days not folding clothes – this is what will happen to me,” the mum wrote in a Facebook group.

In order to stay on top of the laundry, she will do a load daily.

“But this accumulated to three days of non folded clothes,” she added.

She later shared a second snap when the job was complete which showed all the neatly folded clothes piles high in the baskets.

Her post resonated with many parents who said they can “relate” to her massive mound of laundry.

“This is me currently! Five baskets to fold and I will be tackling the washing pile tomorrow that’s taller then me. I just had number three six weeks ago and washing has been the hardest part adjusting to getting it all done,” one mum said according to Mail Online.

Five baskets to fold and I will be tackling the washing pile tomorrow that’s taller then me.

“It feels like some days I’ve got the house spotless and everything’s done then the next day, it’s just like a bomb has gone off.”

Another parent said the photos resembled “pretty much a standard day washing laundry in my house” saying she had three girls under five who “just love to change clothes every two hours.’

And one mum added: “We are the same, six boys, two working adults… It’s an endless cycle. Our older kids do a load of their own washing each week, but our bathtub is always soaking clothes of some sort.”

While not every can relate exactly they did however say they can “feel” her pain – and we certainly can too. 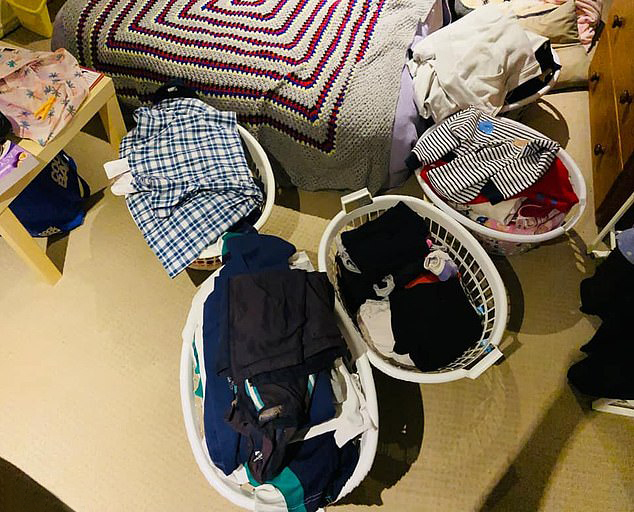 The mum shared an updated snap of the completed task with five washing baskets fullCredit: Facebook

Meanwhile, this mum-of-16 shares colour coding tips to speed up laundry & reveals why she NEVER writes kids’ names in clothes.

Plus this mum-of-seven says ‘three of my kids have birthdays in the same week – I need their birth dates tattooed so I remember them.’

And this mum horrified to discover what’s hidden behind her teenage son’s bed – and parents with boys can seriously relate.