A WOMAN has sparked outrage online after sharing a video that shows a woman at the hairdresser with her child.

A woman by the name of Letitia Joy posted the video to TikTok and in the shocking clip, the baby can be seen sitting in a pram underneath the weight of a designer handbag.

The bag has blocked the baby from view for many, as all you can see if you look closely, is the little ones small feet poking out from underneath.

What has also shocked people is the fact that the undercarriage of the pram appears to be empty, meaning there would have been space for the bag there.

In the right-hand corner of the video, the mother in question can be seen sitting in a salon chair as she has her hair done.

Letitia clarified in the comments that she didn’t film the video, so was unable to say anything to the mother.

She captioned the video “Some people don’t deserve kids,” and the clip has now been viewed 5.7million times.

People flocked to the comments to share their concerns about the situation.

“If the mum treats her kid like this in public then I can’t even imagine at home,” one person wrote.

“The barber is just as bad for not saying anything,” another viewer commented.

Another added: “The bag is more important than her own baby. Sad.”

A different commenter went as far as to call it “literally suffocation”. 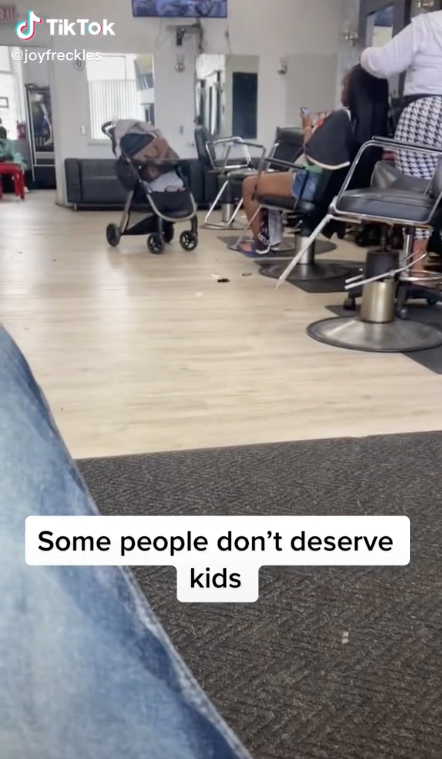 Elsewhere in parenting, one mum shows reality of ‘messy home’ – but is trolled and told she shouldn’t have had kids if she couldn’t cope.

Plus I hate my 14-year-old daughter, she’s rude & lazy – my husband wants to send her to boarding school to avoid seeing her.

And mum hailed a lifesaver for the genius way she protects scared kids from ‘monsters’ – and it’s really easy.

NOTHING makes our blood boil quite like when someone swoops into a car parking spot we'd been eyeing up -...