Mum-to-be shares the symptoms of pregnancy nobody talks about

THERE IS a lot of information about pregnancy that many women do not find out about until they themselves are pregnant.

And that is exactly what one TikTok user wanted to highlight in a video she posted to her account, hilizgoldstein, which has been viewed over 500k times.

Liz shared the symptoms of pregnancy she was never warned aboutCredit: TikTok

Popular TikToker Liz Goldstein shared a list of pregnancy symptoms she is experiencing, which she had no clue she would, and they are very helpful for anyone considering having a child.

Liz, now a mum-of-three, posted the video when she was still expecting her third child.

Heavily pregnant, Liz listed the pregnancy symptoms she had no idea about, and some of them are shocking.

The symptoms include; depression, nightmares, migraines, dizziness, fainting, and having a stuffy nose.

Liz has now given birth to her baby boy and luckily does not have to go through any more pregnancy symptoms for now.

Liz’s 400k followers could also relate to her symptoms.

One user exclaimed: “The nightmares are insane. The vividness is crazy!”

Another user said: “OMG the stuffy nose! Why is that a thing it is so annoying!”

“I got all of those! Like bro huh?!?” Replied a third user agreeing with Liz.

Other users listed other symptoms they got throughout pregnancy that no one warned them about.

One wrote: “No one told me my nose would get bigger as well.”

Whilst others discussed having nose bleeds, pregnancy-induced carpels tunnel and tooth pain.

And Liz is not the only mum candidly opening up about her experience of being pregnant and the not-so-talked-about side effects.

Such as TikToker Emily Carman, a mum and make-up artist who made a similar video discussing pregnancy symptoms.

She listed the symptoms she wasn’t warned about prior to being pregnant such as; having a mucus plug, excessive trapped wind, feeling out of breath constantly, and feeling starving but then getting full after just a few bites of a meal. 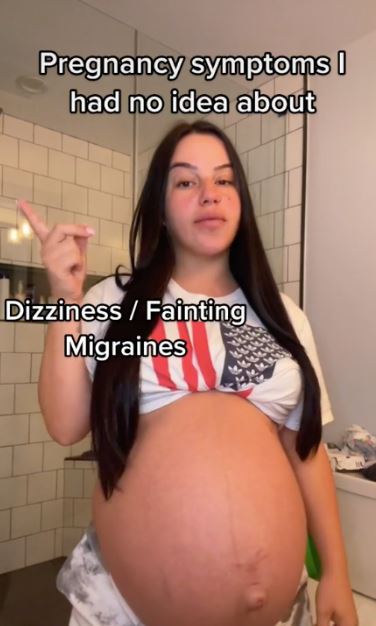 Liz has now welcomed her little boy into the worldCredit: TikTok

For more parenting news, check out the mum who fed her family of five a different meal every night for a year to raise money for Children in Need.

Plus, a mum explains why she puts her seven-month-old baby to bed at midnight.

Meanwhile, I’m a strict mum I don’t care if people say I am mean, my children will never be allowed to go to sleepovers.

PUSHING and panting, Raven Dixon-Biggs took a deep breath as the contractions swept through her. Then - at 40 weeks...

The sounds GUARANTEED to get your baby to sleep