NEW mums take six months to adjust to going back to work, as they admit the workplace is ‘completely different’ to what they remember.

A study 1,000 new mums found on average women take 10 months of maternity leave, with one in five women in tears just a few days after going back to work. 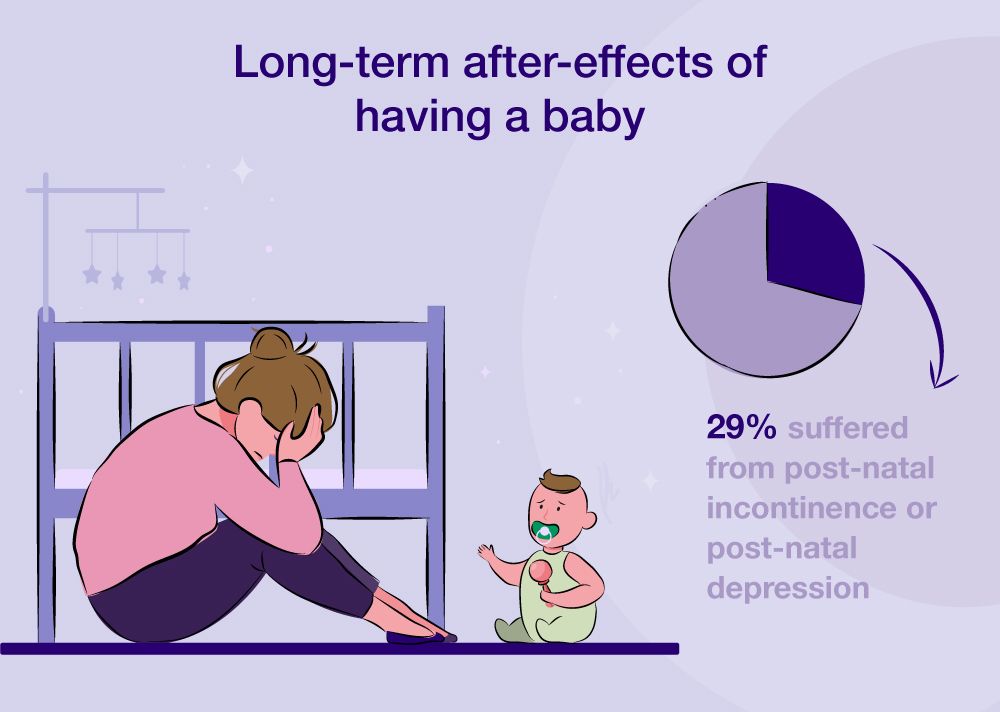 A new study has shown their biggest fear is leaving their child with someone elseCredit: Tena

The results also showed that 31 per cent of women found it harder returning to their old job, while a quarter said their working environment was nothing like the one they left behind.

But women admitted they too had changed, with one in five admitting they felt their boss and colleagues didn’t understand what they’d been through mentally and physically.

And some 14 per cent revealed they weren’t comfortable sharing medical issues they were grappling with as a result of giving birth, such as incontinence, for fear it would make them look unprofessional.

New mums even felt their female, and male, colleagues patronised them, as they learnt how to juggle work and parenting. 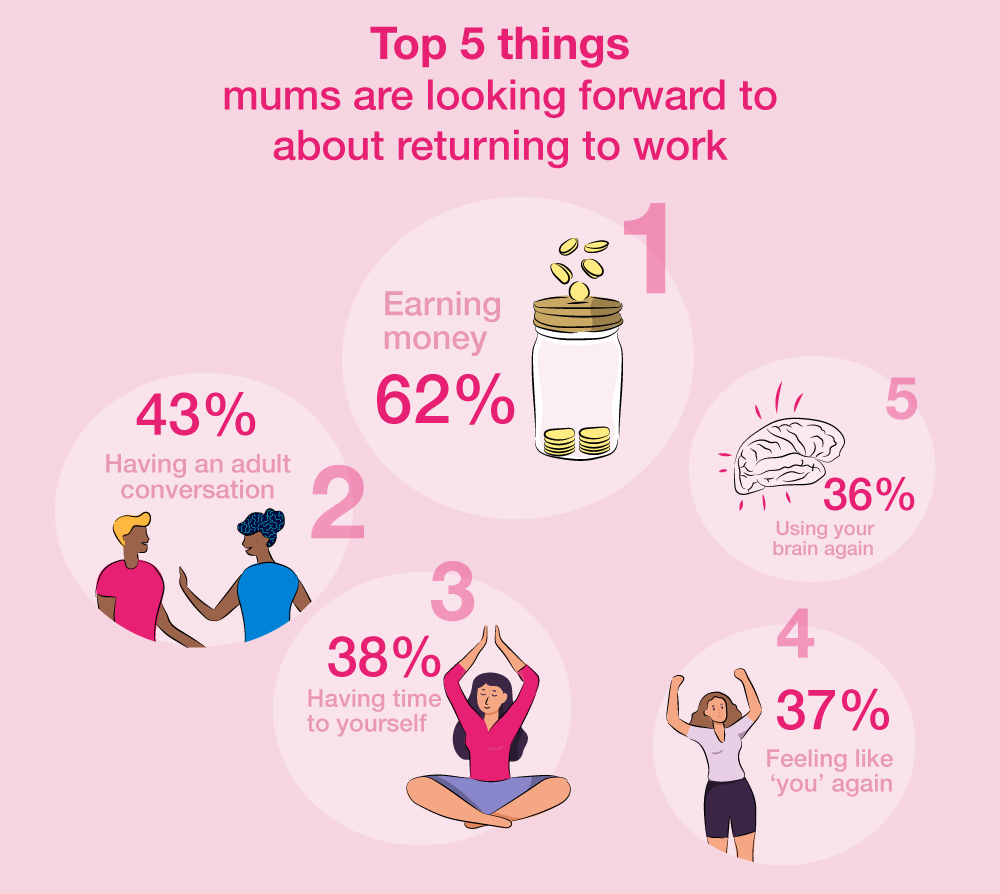 New mum takes an average of six months to adjust to going back to work Credit: Tena

Lisa Myers, from TENA, who commissioned the study, said: “Returning to work after having a baby can be a huge adjustment for many women.

“Regardless of how much you loved your job, or how good you were at it before you had a baby, during that time away, however long or short your maternity leave was, your whole life has changed.

“Your priorities are different and as you try to juggle childcare and your responsibilities as a parent with your job, you can feel isolated and as if no-one understands – particularly if your boss and colleagues don’t have children of their own.

“This is also made worse by the physical and mental effects of having a baby – many of which can still be affecting women months or even years later. 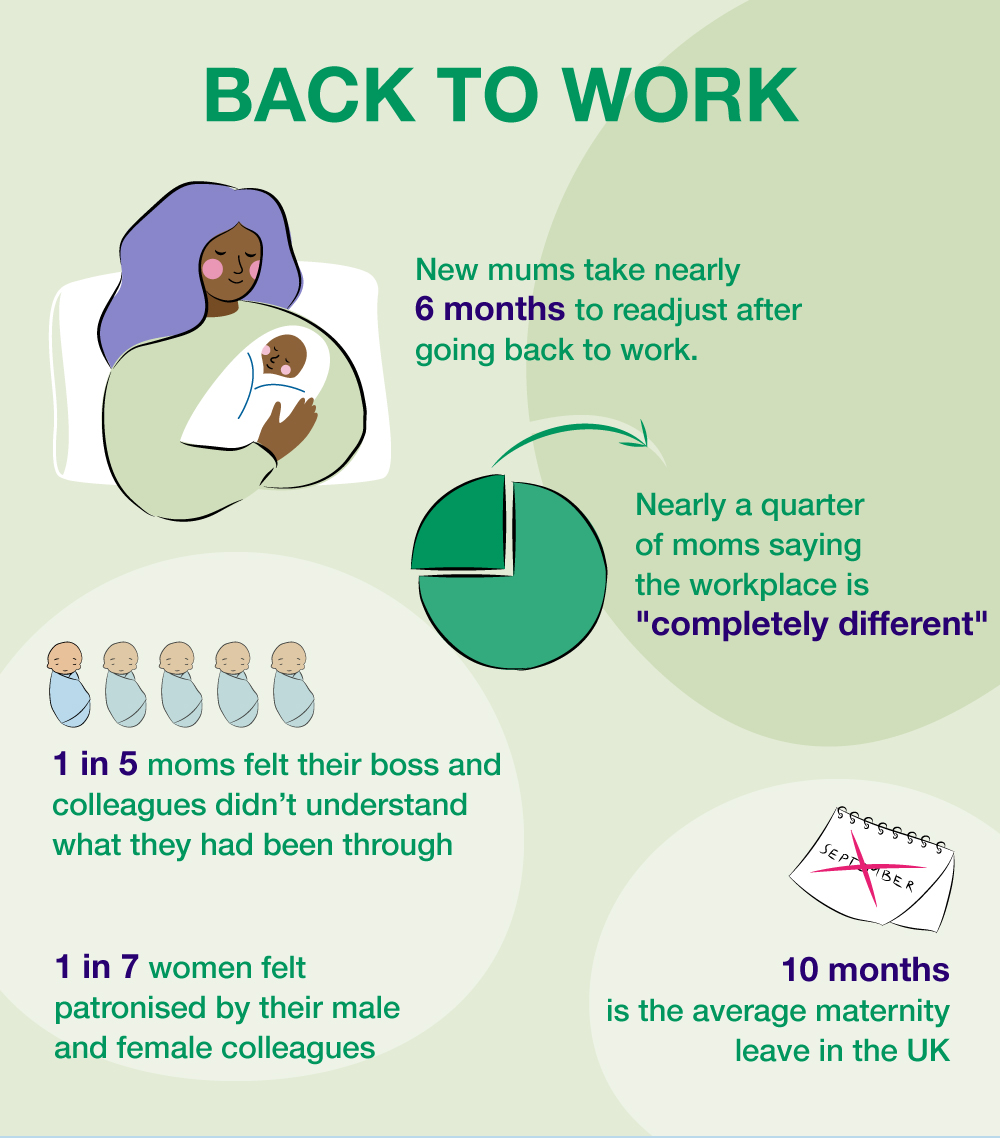 Mums reckon their colleagues and bosses don’t understand the mental and physical changes they went through Credit: Tena

“At a time when confidence levels may already be low as mums adjust to being back in the workplace after months away, issues such as post-natal incontinence can make that return to work even harder – especially with the taboo around it making it difficult to talk about.”

The study also found that while 27 per cent of new mums felt excited at the prospect of returning to work, 52 per cent were worried and 37 per cent went as far as to say they were dreading it.

And four in 10 felt guilty about going to work instead of being at home with their baby.

Having to leave their child with someone else was the top concern for new mums about returning to their job, along with juggling childcare and the cost, and fitting back into their role.

TOP 20 WORRIES MUMS HAVE ABOUT RETURNING TO WORK

1. Leaving their baby/child with someone else
2. Juggling childcare
3. Fitting back into their job and knowing the role
4. Paying for childcare
5. Having to be more organised to get everything ready for work/ nursery/ school in the morning
6. Having to take time off work when their baby/ child is ill
7. Dealing with changes which happened with their job/ company while they were away
8. Fitting back into the team when their life had changed so much
9. Colleagues not understanding the pressures of having a child
10. Not being able to work late/ come in early when everyone else does
11. Not being able to socialise as much as everyone else
12. Crying because they miss the baby so much
13. Dealing with the physical effects of having a child
14. Boring their colleagues with baby talk
15. That their colleagues will see them in a different light
16. Not understanding the in-jokes after having time away
17. Arriving at work with fingerprints/ food /sick on clothes
18. Being reprimanded for constantly calling the childminder / nursery to check on the baby
19. Accidently using childish words in meetings
20. Pulling children’s toys out of their bag in a meeting

But 62 per cent were looking forward to earning money again and 43 per cent wanted to get back to having adult conversations.

However, the study found that of the 29 per cent who suffered from long-term after-effects from having a baby, such as post-natal incontinence or post-natal depression, just 22 per cent were completely open with their colleagues or boss.

Of those who kept it to themselves, 53 per cent did so out of embarrassment while 55 per cent didn’t want others to think they weren’t up to the job.

Others suffered in silence to avoid being treated differently because they had children (40 per cent), or not wanting to be overlooked for promotion or certain tasks (19 per cent).

1. Earning money
2. Having an adult conversation
3. Having time to themselves again
4. Feeling like ‘them’ again
5. Using their brain again
6. Having a life away from just being a mum
7. Being back to a little bit of normality from their pre-baby life
8. Being back with their team/ colleagues
9. Having a routine again which didn’t revolve around feeding and nappy changes
10. Watercooler gossip

A quarter of those who suffered long-term physical or mental effects of pregnancy and childbirth said it affected their career, with 32 per cent also feeling like their colleagues or boss treated them differently as a result of their issues.

One respondent was advised not to go for higher level roles, as they were returning part time, while another mum felt that as they were unable to stay late due to childcare, they weren’t given certain jobs or tasks.

The study, carried out via OnePoll, also found 31 per cent feel Covid-19 will make it easier for women to return to work, with 53 per cent of those putting this down to it now being more acceptable to work from home, which makes childcare easier. 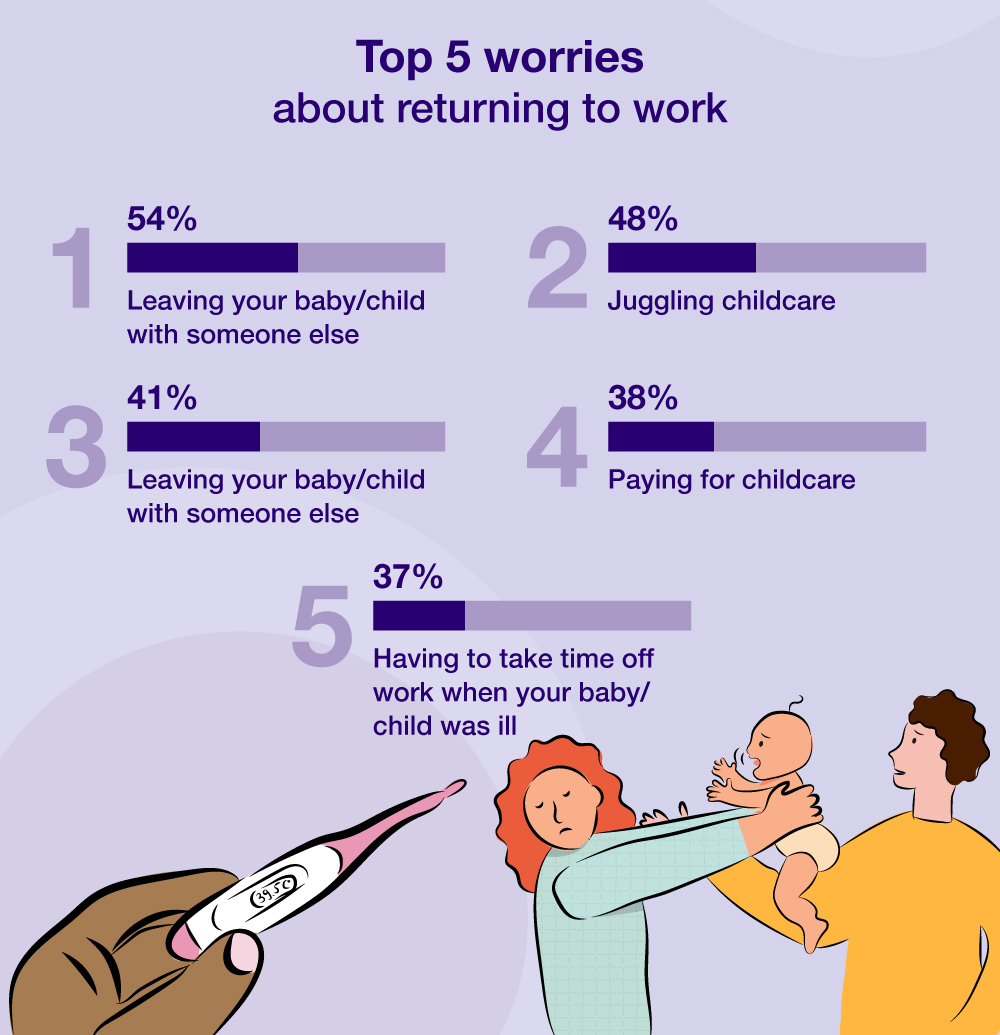 But they looked forward to workplace gossip and using their brains again Credit: Tena

And 42 per cent think the rise of working from home means it is easier for women to deal with the physical effects of having a baby.

Lisa Myers, from TENA, added: “The working landscape has changed considerably over the last few months – especially for those who are based in offices.

“And there are many who believe the rise of working from home will benefit those mums returning from maternity leave – especially if they are also dealing with the physical or mental effects of having a baby.”

Following the findings, blogger Anna Whitehouse, AKA Mother Pukka, and comedian Athena Kugblenu have spoken about their experiences and the challenges of being working mums in a video. 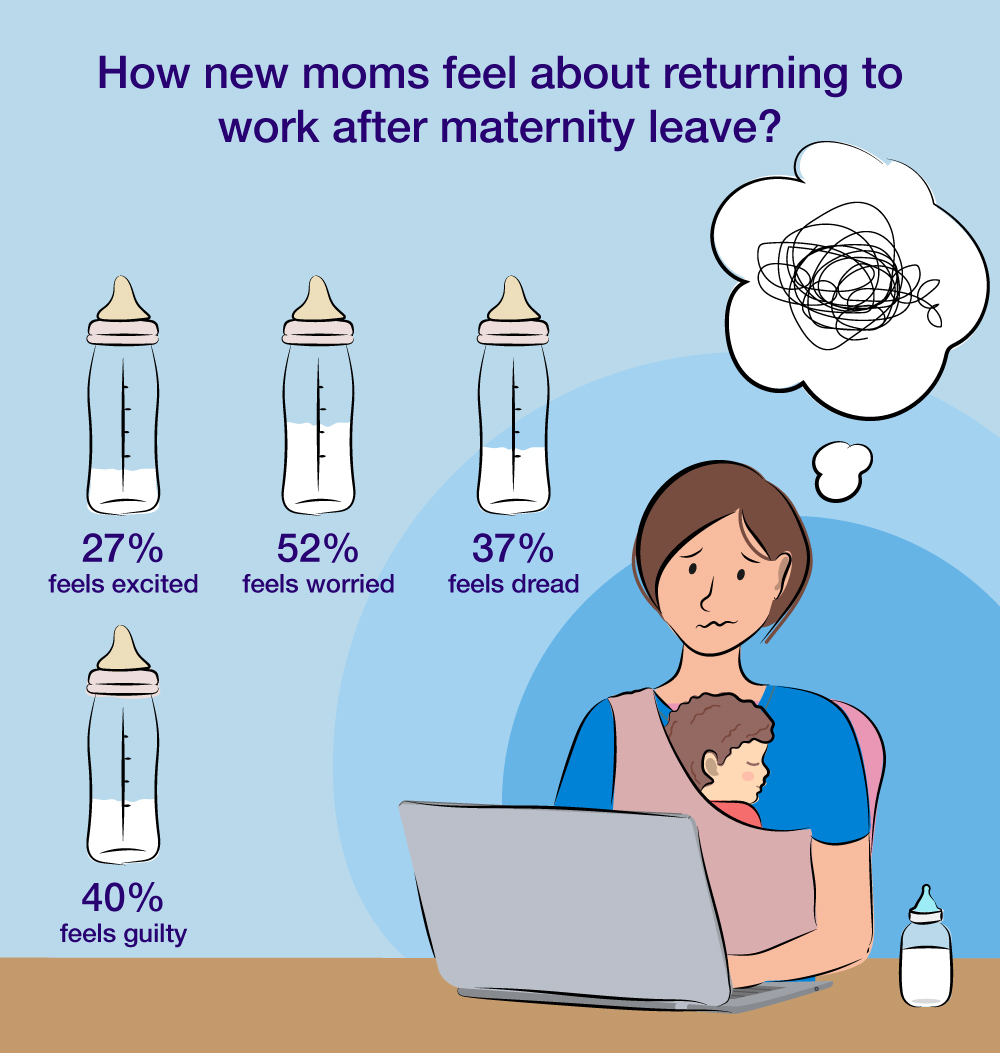 Mums reckoned returning to work is easier as working from home is the normCredit: Tena

And the most popular baby names of 2020 revealed, plus the ones set to become extinct (and it’s bad news for Karens).

Meanwhile this desperate mum asks for help with her 10-year-old daughter’s ‘trick’ maths homework but gets totally savaged in response.

Plus this mum sick of the kids stealing her snacks hides them in bags of frozen veg & her kids still haven’t found them.