A HUSBAND took his wife on a ‘work’ Christmas do to complete an annual review of their marriage as her ’employer’ – including feedback on her ‘bedroom performance’.

Chris Stares presented full-time mum Sophie with a two-page report while out for a pub lunch, complete with a detailed table grading her on 18 aspects of family life. 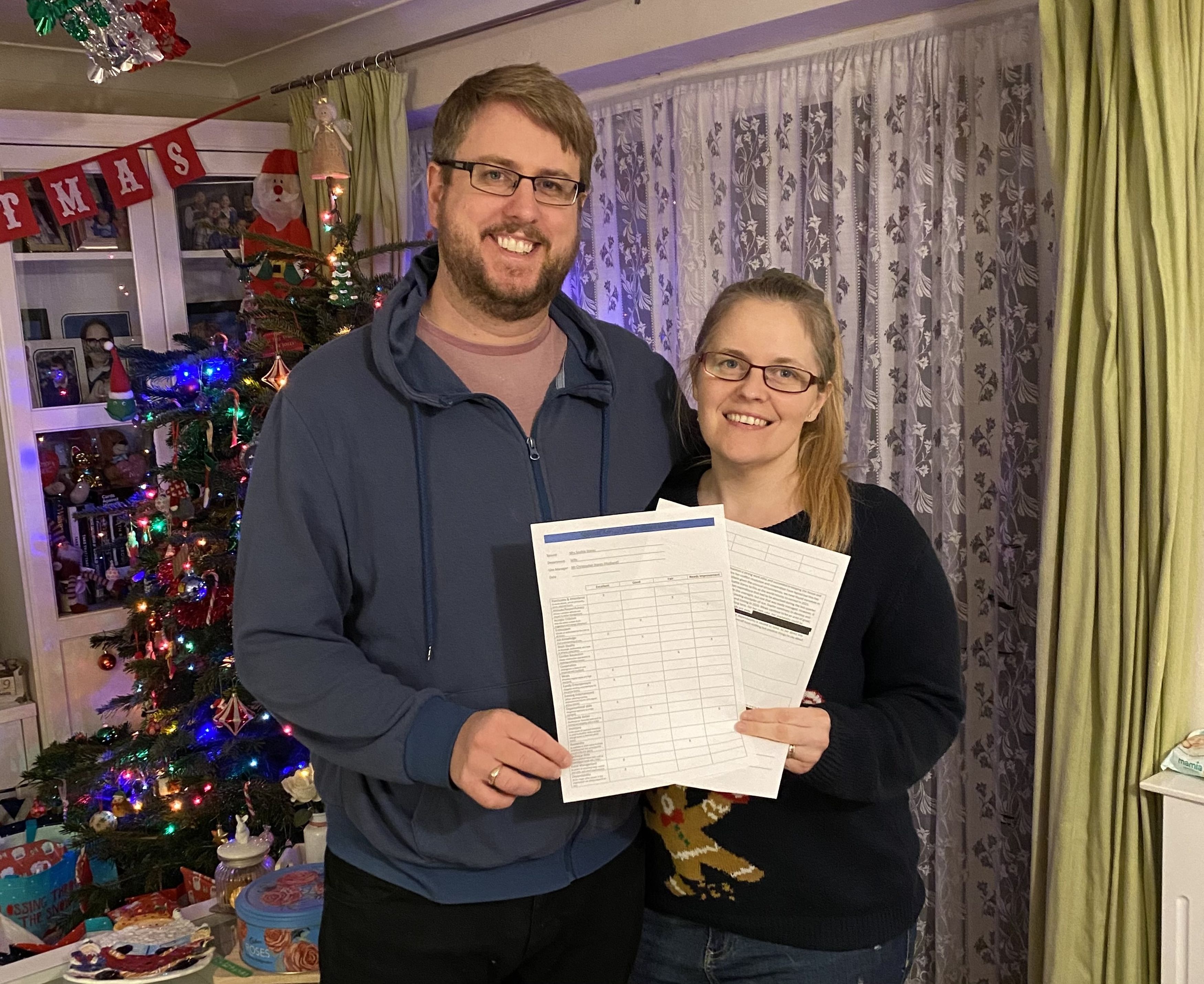 Chris Stares provided his wife Sophie with a performance review of her housewife duties Credit: Kennedy News and Media

The self-appointed ‘line manager’ used the form to jokingly take aim at her conflict resolution skills and her unwillingness to accept criticism, marking them as ‘needs improvement’.

The dad-of-five even concluded the audacious report with a summary and ‘performance improvement plan’, which requests his wife of 14 years to acknowledge ‘sometimes husbands are right too’.

Sophie, 38, joked her partner was ‘wise to do the review in public’ on Tuesday, but she does admit she was flattered to see some of her hard work being graded ‘excellent’.

Chris divulged he was ‘very complimentary’ of Sophie’s performance between the sheets too but stopped short of revealing naughty details their ‘children shouldn’t be reading’. 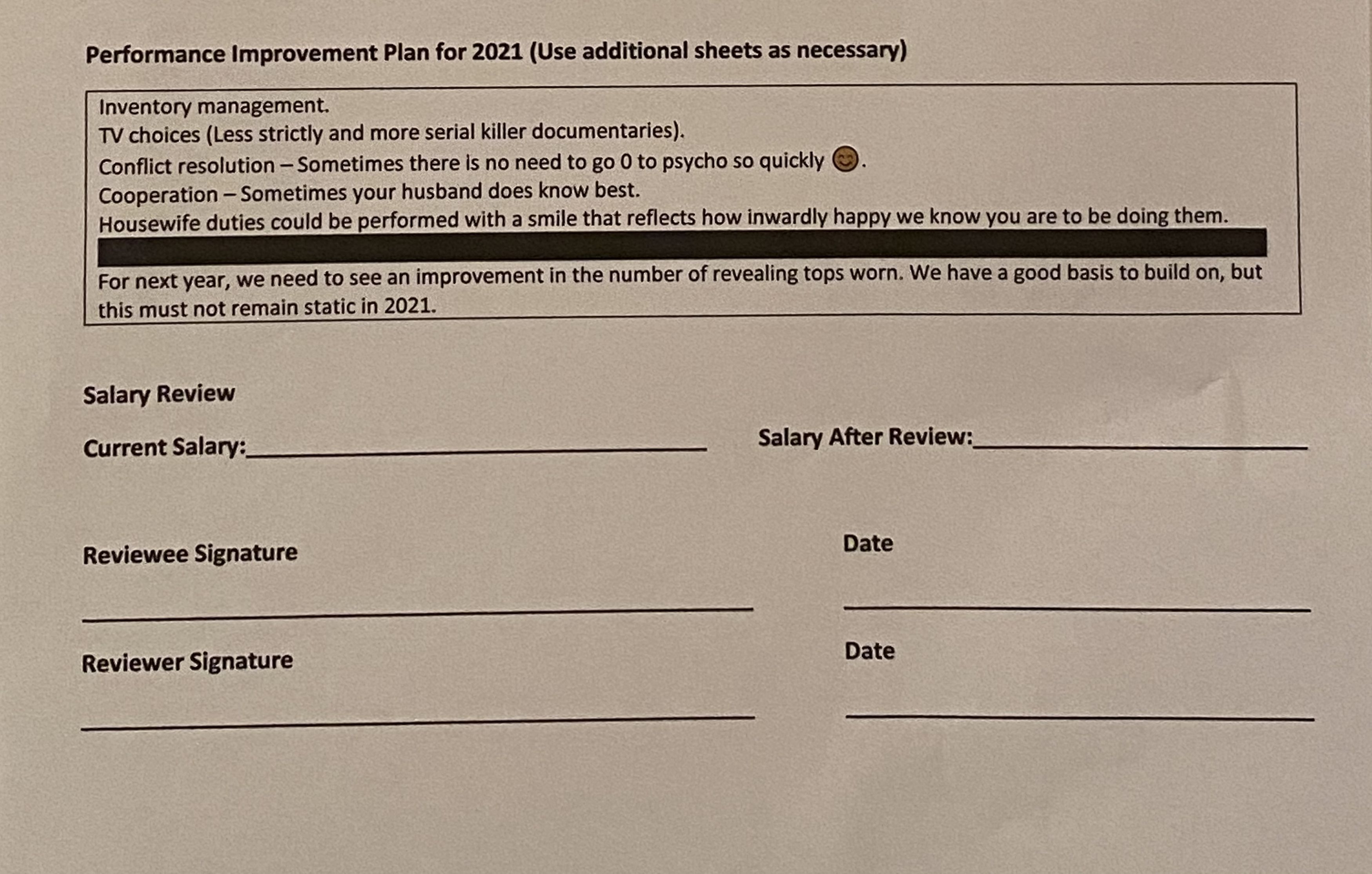 The self-appointed ‘line manager’ used the form to jokingly take aim at her conflict resolution skillsCredit: Kennedy News and Media 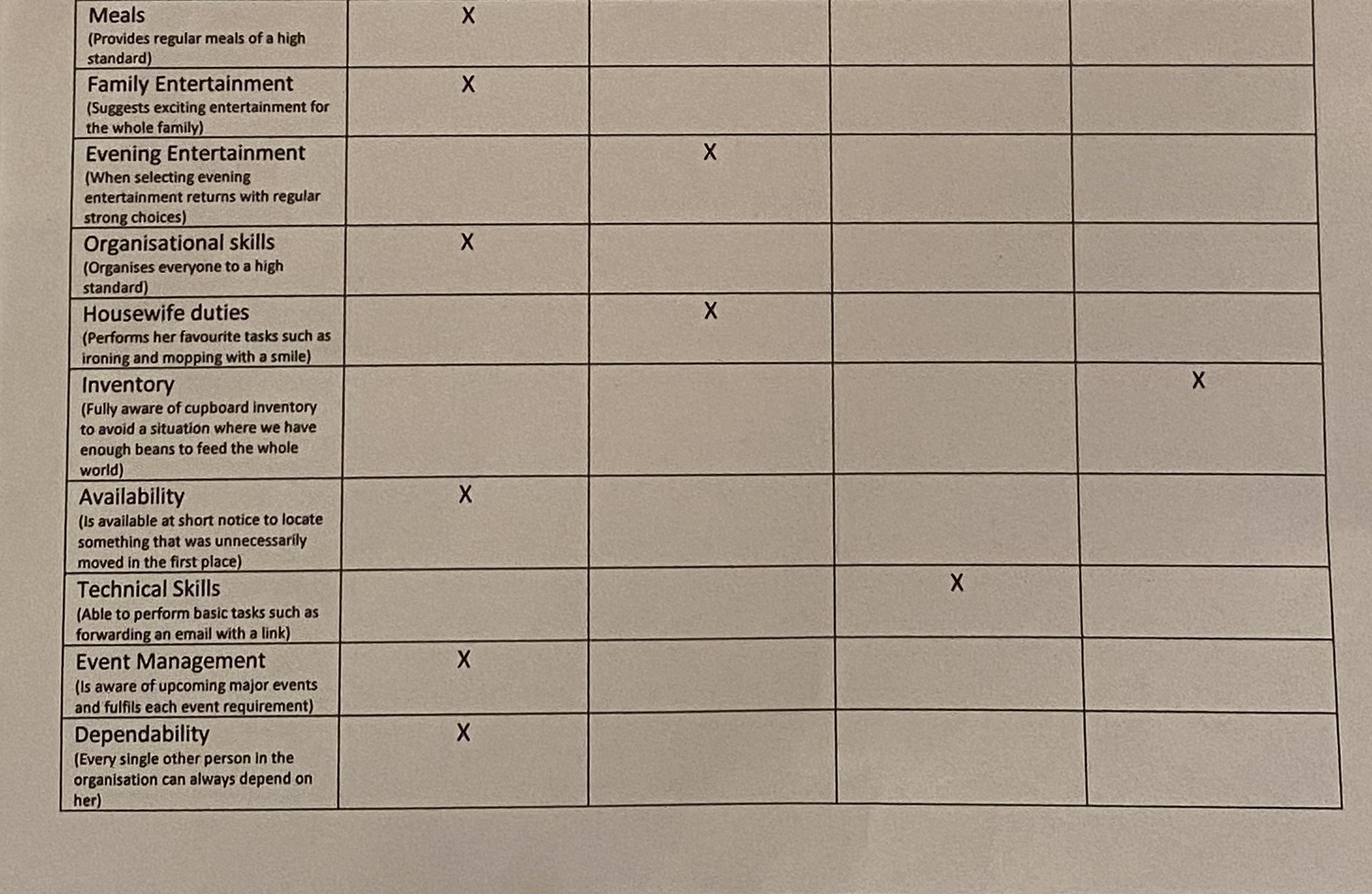 He gave her scores for each area of her skillsetCredit: Kennedy News and Media

The 39-year-old admits he momentarily thought he was going to regret handing his wife the chart but backed it as ‘all valid’.

The couple’s Facebook post revealing the wacky review has since been liked more than 2,200 times, with many hailing it as a ‘great idea’.

However not everyone saw the funny side and some claimed the joke was better suited to 1920 not 2020 – even branding it ‘degrading’.

Christopher, from Purley on Thames, Berkshire, said: “We’d arranged to go out together and Sophie said it’s ‘mummy’s Christmas do’, because she doesn’t get one as a full-time mum.

“I thought if it’s Christmas do, you can’t have one of them if you haven’t had an annual review yet. 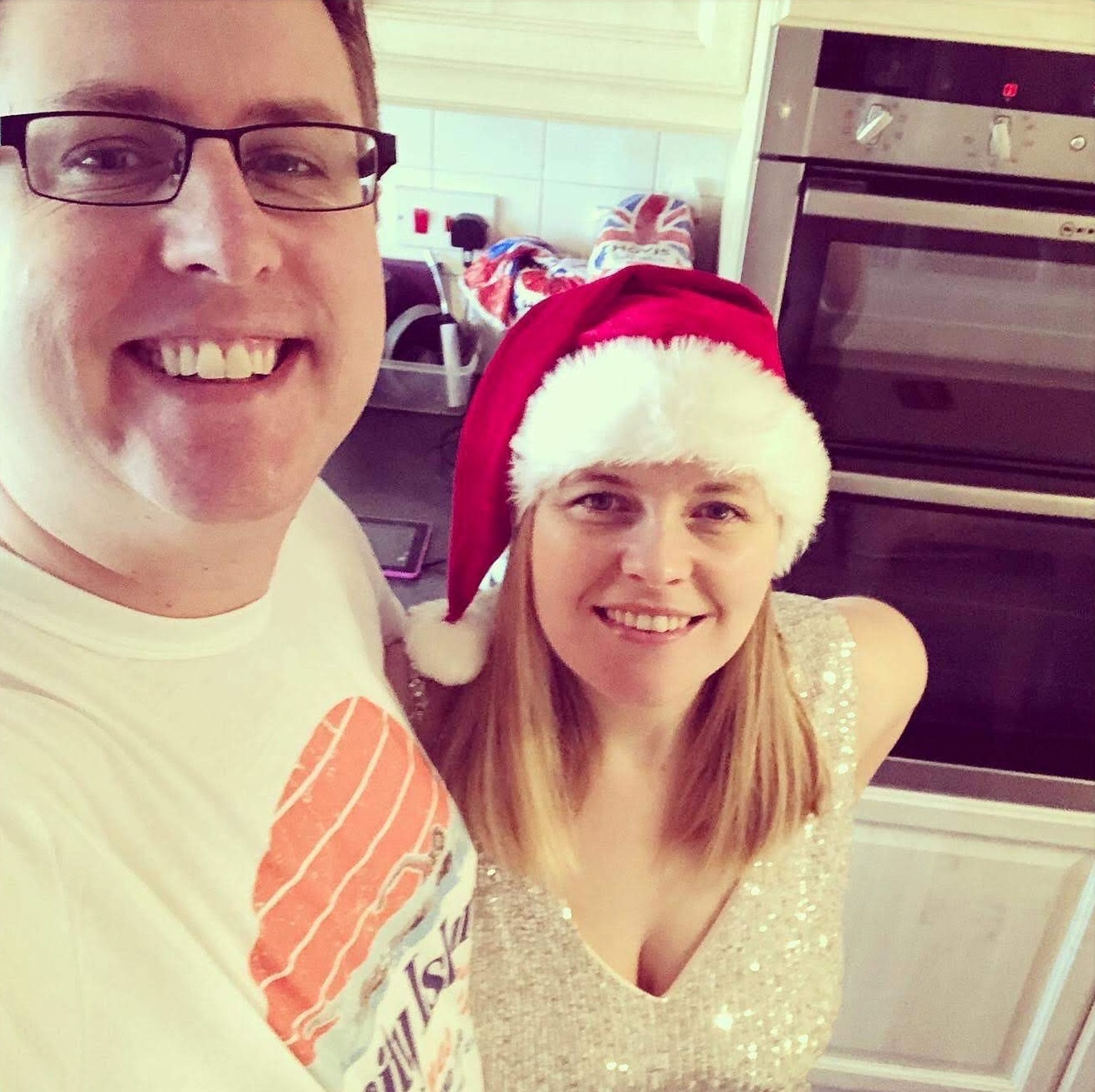 The husband even reviewed his wife’s bedroom performance Credit: Kennedy News and Media

“Despite a difficult year, Sophie Stares has managed to maintain a strong work ethic and succeeded in keeping the house and family ticking over very well.

“There have been times where her conflict resolution and cooperation have lapsed but this has often been accepted by senior management as understandable given the unusual circumstances we have found ourselves in during 2020.

“We will be looking for a new approach from Sophie Stares to this as the world returns to normal in 2021.

“Inventory lapses meant an unnecessary increase in baked bean expenditure that had to be absorbed during the last quarter of the year, causing a slight financial reshuffle to accommodate this oversight, but one that was easily managed.

“However, it has been noted that we are in danger of becoming the world’s leading stockpiler of rice. Sophie continues to develop and improve her strengths with an excellent return in both washing and ironing in 2020.

“Meals continue to be an area of great success for Sophie Stares and I hope to see this continue for the long term.

“For her own sake, her availability could be lessened if she stopped putting stuff away that was, actually, already put away. Her management skills continue to surprise us all and her dependability is second to none.

“”As her direct line manager, I recognise that there are areas where we can develop but overall I have nothing but positive things to say about Sophie’s year to date.

“On Thursday while Sophie was watching I’m A Celebrity… Get Me Out of Here!, I told her I’d try to get a better gas and electric deal but I did [the review] without her knowing.

“I wasn’t quite sure how it’d go. If she’d had a good day, she’d see the humour in it, but if it was a bad day it was going to be a really awkward lunch. Luckily it was a good day.

“There was a moment when I handed it over where I thought ‘I’m not sure I should have done this, I’ve made a terrible mistake’, but she took it well and I think it’s all valid.

“There were some things on there that no child should have to read about their mum and dad, and we’re going to keep it that way.

“I’ll say it was about bedroom performance and it was very complimentary, but we’ll leave it at that.”

Chris’ performance table rated Sophie’s wife and mothering skills as ‘excellent’, ‘good’, ‘fair’ or ‘needs improvement’, and he gave her eight out of 18 ‘excellent’ marks. 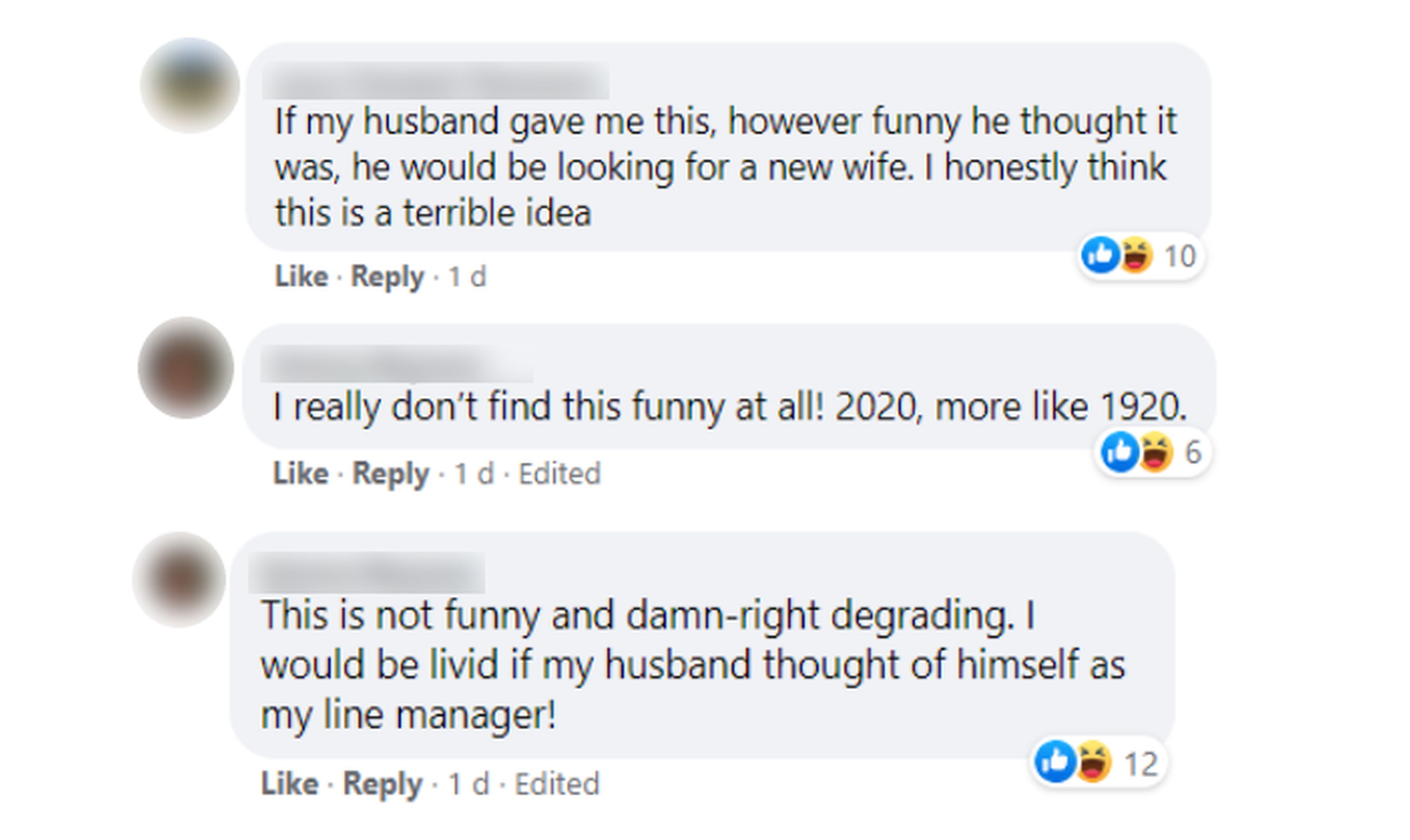 People were left horrified by the “degrading” performance reviewCredit: Kennedy News and Media

She was commended for her top-grade punctuality, organisation, family entertainment ideas and cooking skills, but was rated ‘needs improvement’ in three categories.

One criticism was her tendency to overstock food, which Chris boiled down to stockpiling too much rice and beans for lockdown.

In the 245-word ‘remarks and recommendations section’ the husband complimented Sophie for keeping the family ‘ticking over’ and hailed her dependability as ‘second to none’.

He added that ‘senior management’ could understand her lapses in conflict resolution and cooperation, but he expects to see improvements as the world returns to normal in 2021.

Chris’ then joked in his ‘performance improvement plan’ that Sophie should understand ‘there’s no need to go zero to psycho so quickly’ and she should perform household duties ‘with a smile’.

The IT support worker even recommended she wear more ‘revealing tops’ and watch more serial killer documentaries rather than Strictly Come Dancing. 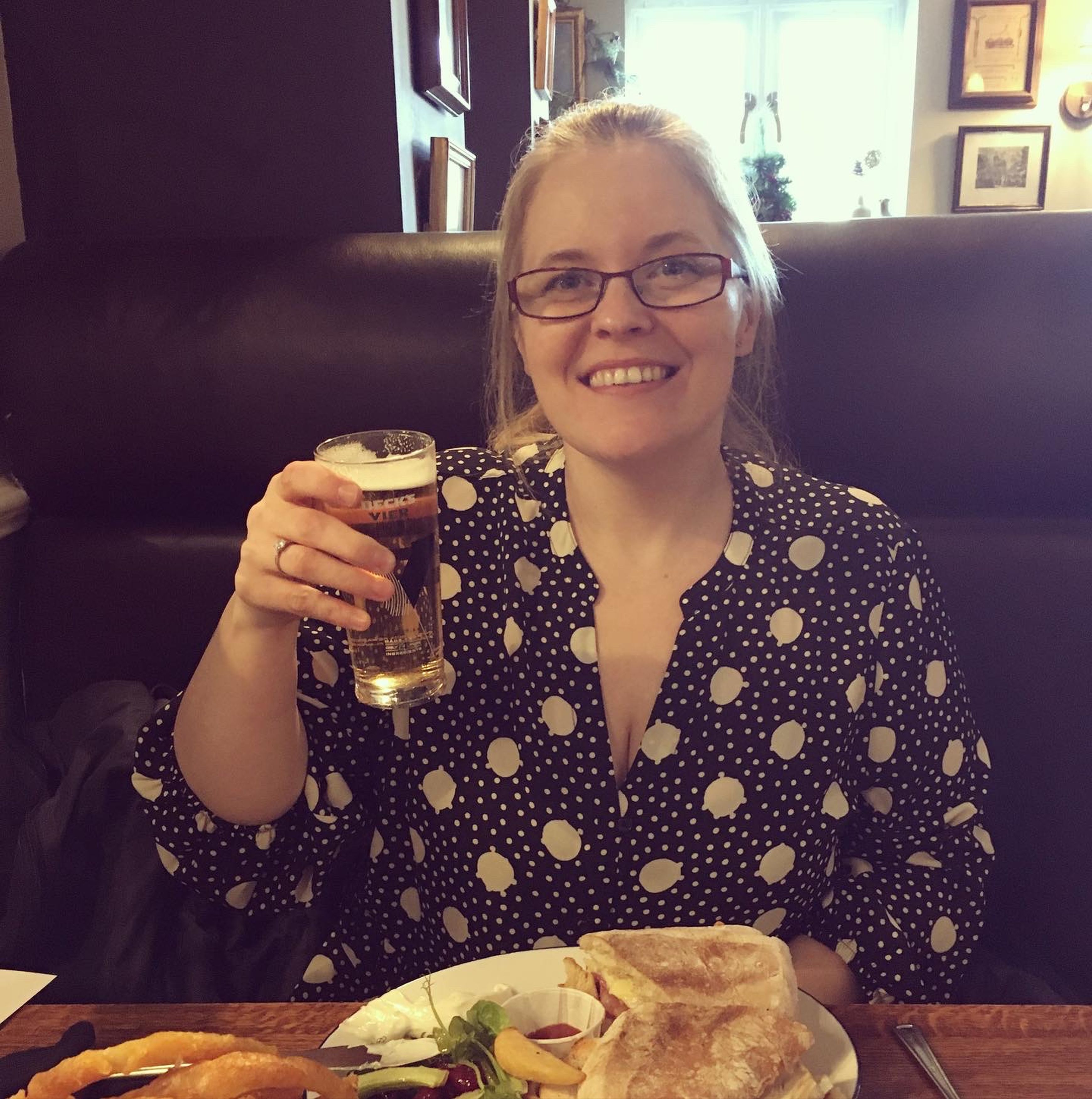 Chris even asked that Sophie wear more “revealing tops” as part of her performance reviewCredit: Kennedy News and Media

Sophie said: “We’ve been together 18 years next year, so I’m quite used to him doing things like that, and he’s joked about doing these reviews but I’ve always said ‘don’t you dare do it’.

“I sat there and read through it at the table. I think he was wise to do it in a public place with people around so I laughed it off. Luckily I saw the humour in it. It’s Christmas.

“I was thinking ‘oh my god’ you’ve actually taken to do it, but I don’t agree with some of the scores at all. It’s a good job I was in a good mood. I’d definitely appeal.

The good things I liked and I’ll agree with, but with the point about stocking piling rice I don’t because it meant nobody went hungry during lockdown.

“I’ve not given any feedback yet, but I’ll definitely get around to doing that.”

Chris had taken half a day off to nip to the pub in Woolhampton, Berkshire, and the pair saw it as their last moment’s peace before the busy Christmas period.

Chris said: “The fact doesn’t accept the marks tells you all you need to know, but I’m nervous to hear what she’ll write as feedback.

“I dread to think what would happen if I had a review. I don’t think there will be as many crosses in the right boxes, put it that way.

Former HR worker Sophie said to ‘watch this space’ because she might make a review of her own next year.

Conflict resolution. Sometimes there is no need to go zero to psycho so quickly.

Housewife duties could be performed with a smile that reflects how inwardly happy we know you are to be doing them.

For next year we need to see an improvement in the number of revealing tops worn.

We have a good basis to build on, but this must not remain static in 2021.

Sophie’s Facebook post revealing the review said: “For me it was a lovely festive lunch with my husband before it gets busy with Christmas, for him it was apparently my works Christmas do with my ‘employer’ complete with an annual review.”

One user said: “Your husband’s a legend and you’re a saint for putting up with him.”

Another said: “Utterly brilliant. I dread to think what my husband would put lol.”

A third jokingly commented: “Omg I would roll that up and make him stick it where the sun don’t shine!”

However not everyone saw the funny side and thought the joke was out of date or even ‘degrading’.

Another said: “This is not funny and damn-right degrading. I would be livid if my husband thought of himself as my line manager.”

A third added: “If my husband gave me this, however funny he thought it was, he would be looking for a new wife. I honestly think this is a terrible idea.”

In other relationship news, this 1950s housewife guide warned women never to moan and to always have a drink ready for their man.

And this wife breaks hearts after revealing why she takes a bite out of her man’s packed lunch every day.

While this scorned wife gets savage Christmas T-shirt made which outs THREE of her husband’s mistresses. Never be mean to restaurant staff. Why would you want to in the first place? But also, keep in mind...

How many dates do people go on before they’ll have sex with someone new?

How I Do It: ‘I’m a sexpert and married mum. Here’s a week in my sex life’

The Sex Column: ‘How do I stop jealousy ruining my relationship?’