IT’S not uncommon for mates or family members to share logins for steaming services such at Netflix or Spotify, but one bloke has gone to extreme lengths to get his football fix, it’s been claimed.

In a bid to get free access to BT sport, where he could watch premier league football, the lad supposedly attempted to woo single girls online – before asking for their login. 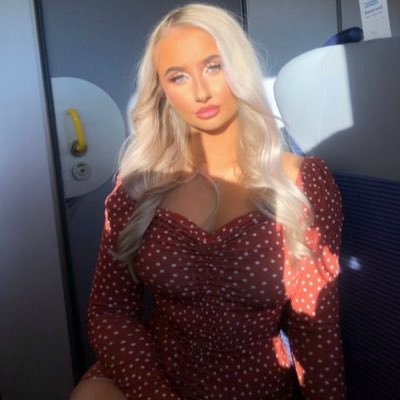 Ellis McBride, from north east England, shared screengrabs of the text exchange on Twiiter and hundreds of woman said the same thing had happened to themCredit: @ellismcbridee/Twitter

But it was only a matter of time before he was caught out and Ellis McBride, from north east England, took to Twitter to expose his “cringey” pick up attempt.

Ellis shared screenshots of the Instagram private messages between her and the bloke who first complimented her by calling her “gorgeous” before sussing out whether she could help him with the paid TV service.

But it seems she wasn’t alone, as hundreds of women replied to the Tweet claiming he’d done the exact same thing to them.

The bloke’s Instagram account has reportedly been blocked and he supposedly used a photo of someone else as his profile pic – with one bloke admitting in the Twitter thread that it was HIS photo that was used. 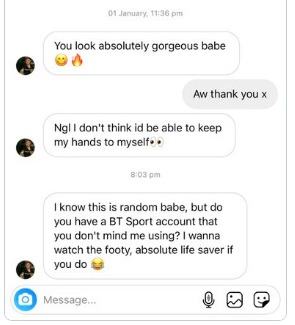 The lad always starts by saying the women were “gorgeous” before asking for their BT sport detailsCredit: @ellismcbridee/Twitter

Despite this, his pick up lines proved to be consistent with many women claiming he starts with: “You are absolutely gorgeous babe”.

Then, in the next message he’d supposedly say: “Ngl (not gonna lie) I don’t think I’d be able to keep my hand to myself” before then asking for the login.

“I know this is random babe, but do you have a BT sport account that you wouldn’t mind me using? I wanna watch the footy, absolute lifesaver if you do,” he allegedly says.

Many women shared he’d used the same chat up lines on them, unable to believe they weren’t “special” – but some reckon he’s lines are creepy. 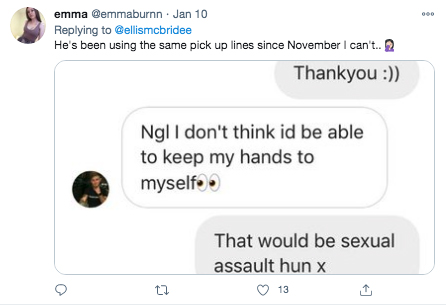 One woman shared a screengrab of her own messages saying he’s been using the “same lines since November”Credit: @ellismcbridee/Twitter 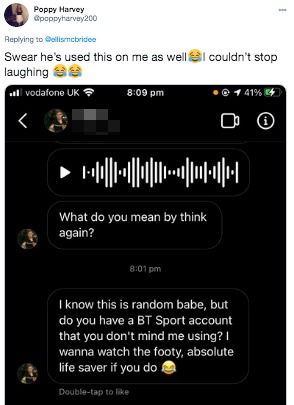 Other women were sharing conversations they had with the bloke who said the same thing Credit: @ellismcbridee/Twitter 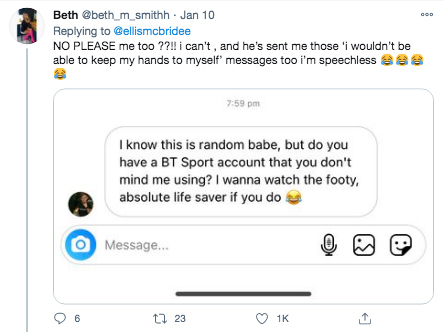 One woman admitted she “couldn’t stop laughing” when the same guy asked her for her BT sport loginCredit: @ellismcbridee/Twitter

“Aw I don’t feel special anymore,” one woman wrote sharing a screenshot of her own chat with him.

Amused, another wrote: “NOOO no way, he did try the exact same thing on me.”

Shocked, a third said: “NO PLEASE me too ??!! i can’t , and he’s sent me those ‘i wouldn’t be able to keep my hands to myself’ messages too i’m speechless”

And a fourth said: “Swear he’s used this on me as well. I couldn’t stop laughing.”

Even women who hadn’t been contacted by the lad chimed in, slamming the bloke for his “cringey” ways.

The post racked up thousands of comments from women who all experienced the same thingCredit: @ellismcbridee/Twitter 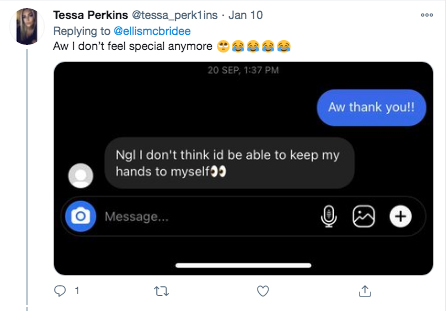 People were most disturbed by his “creepy” pick up linesCredit: @ellismcbridee/Twitter

“The BT Sport line is probably less cringey/creepy than the hands line though,’ admitted one.

“Men just don’t know how to give you a compliment and go,” a third said. .

“That’s one of the worst things I’VE actually ever seen,” said another.

In other dating horror stories, a bloke says date is ‘bigger than expected’ in cruel text meant for mate – but is sticking around as family ‘is loaded’.

Meanwhile, this lad ‘tired of being single’ was called ‘evil’ for revealing plan to split up his loved-up mates and their girlfriends.