IT’S the one day of your life where you’re guaranteed to be completely and utterly the centre of attention at all times.

So naturally, most brides don’t want to share the spotlight with anyone else on their wedding – least of all their husband’s EX.

The bride’s face dropped when the wedding photographer called her by her husband’s ex’s nameCredit: jpvideography2141/Tiktok

Unfortunately for one recent newlywed, her photographer repeatedly brought her husband’s former flame to the forefront of everyone’s minds when she kept getting her name wrong.

And to make matters worse, the absolutely excruciating moment was caught on film – so the whole wedding party will fondly remember it forever.

Earlier this month, the couple’s videographers shared the awkward clip on TikTok – where it’s racked up over 687,000 “likes”.

In the viral video, the photographer asks the newlyweds Corey and Kaitlyn to look lovingly at each other as they pose with their wedding party.

The bride’s face suddenly drops when she hears her husband’s ex’s name – before having a quick laugh with his groomsmen.

She then tactfully told the photographer: “That’s his ex…”

And just when you think the couple have recovered from the awkward mistake, the photographer accidentally calls her Taylor AGAIN.

Apparently the bride from the week before was called Taylor!

The bride yelled: “HANG ON!”

Rushing to diffuse the situation, a wise member of the wedding party tells the photographer to just refer to them as “the couple” instead.

The video team captioned the video: “Photographer calls bride by the wrong name… which happens to be the groom’s ex’s name.”

After the video went viral, the videographers rushed to defend their colleague.

They added: “Apparently the bride from the week before was called Taylor!”

But that didn’t stop others from speculating that the groom’s ex had been involved in some way.

One replied: “She was probably told to do this by Taylor…”

Speaking from experience, another added: “As a photographer, I call people by the wrong name all the time. I would die if this happened to me.”

Meanwhile, a third wrote: “Y’all crazy to be mad at this.

“Photographers are normally strangers and literally film tons of weddings. Why let it ruin your day?” 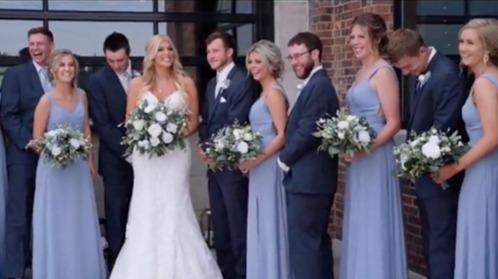 To make matters worse, the photographer made the mistake TWICECredit: jpvideography2141/Tiktok

For more wedding horror stories, this ‘bride’ praised for her beautiful Vera Wang ‘wedding dress’… until people realise she wasn’t the one getting married.

And this ‘entitled’ bride savaged for rude note banning people from public camping ground so she can use it to marry.

Plus this ‘foul’ bride slammed for ‘romanticising mass death’ after throwing Titanic-themed wedding.