A WOMAN has been branded ‘trashy’ after announcing she has an STD on Snapchat – telling her former lovers to ‘get checked’.

Rather than an awkward phonecall, or even a text, this woman decided to broadcast her medical history to the world. 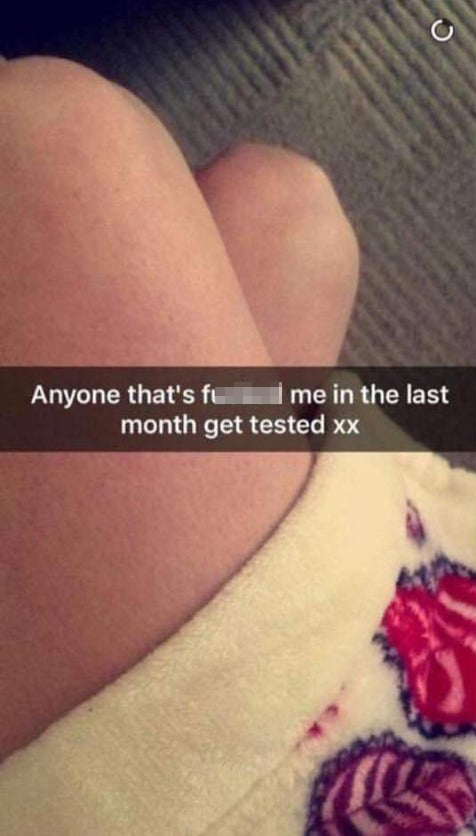 She shared a snap of her medical card to the social media platform, saying: “Anyone that’s f***** me in the last month get tested.

Her results show while she’s negative for syphilis and chlamydia, she’s caught gonorrhea.

The NHS says: “Gonorrhoea is a sexually transmitted infection (STI) caused by bacteria called Neisseria gonorrhoeae or gonococcus. It used to be known as ‘the clap’.”

She shared a photo of her medical card which revealed she had gonorrhoeaCredit: Reddit

Symptoms include thick green or yellow discharge from the vagina or penis, pain when peeing and, in women, bleeding between periods.

The woman’s frank confession to all her friends, family and followers has since gone viral, after it ended up on Reddit.

Sharing the snaps, one person asked: “How many anyones could there be?!”

The post, which can’t be verified, racked up more than 2,000 comments, as people branded the woman ‘trashy’, but praised her for being honest.

One person said: “Honestly. Yeah it’s trashy for her to share it with the world. But at least she’s actually telling them.”

The post racked up more than 2,000 comments, as people branded her trashy

Another wrote: “It would be way trashier of her not to say anything.”

Someone else pointed out: “Also, she doesn’t have syphilis or chlamydia!

“The trashy is likely that she needs to broadcast it and can’t just make a couple of phone calls.”

This person thought: “I think the trashy part isn’t that she’s sharing it with the world, it’s that there are so many she needs to share it with that she can’t be assed to make individual phone calls, or perhaps there are so many that she doesn’t remember all of them.”

While another added: “Ah, lets post this so the entire world knows, much easier than an awkward phonecall.”

Meanwhile this embarrassed mum reveals horror of having to go to A&E at 38 weeks pregnant after hair removal cream burnt bits.

And a woman reveals extreme lengths desperate bloke goes to after she blocked him – including changing his Netflix name.

Plus this woman pens scathing letter to ex who sent her a sex toy meant for his mistress.