I donated a kidney to my girlfriend’s mum

A MAN has taken to TikTok to complain after his girlfriend dumped him less than a month after he donated a kidney to her mother.

Uziel Martinez – a teacher from Baja California, Mexico – went viral on the social media site after revealing the situation as part of a TikTok trend.

Uziel Martinez was dumped by his girlfriend less than a month after he donated a kidney to her mumCredit: TikTok/@uziel.ms 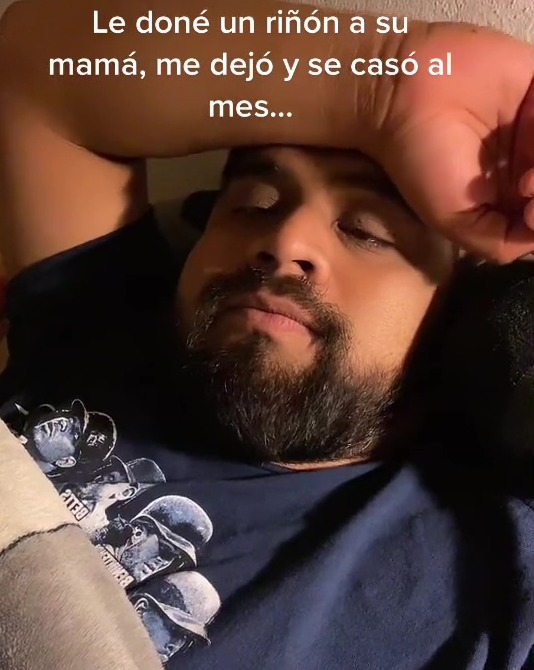 The clip has been watched over 16 million times on TikTokCredit: TikTok/@uziel.ms

“I donated a kidney to her mother, she left me and got married a month later,” he wrote in Spanish over a clip of himself looking forlorn while laying on the sofa.

The clip has been watched more than 16.6 million times, with many offering their sympathy to Uziel and urging him to keep his head up.

“Don’t look so sad, she lost a great gentleman,” one person commented.

“Keep moving forward and find the perfect woman who appreciates you.”

In a later video, Uziel addressed his current relationship with his ex, insisting they are on good terms despite their split.

“Actually I’m fine, I’m fine emotionally, I think so is she,” he said, according to Mexico News Daily.

“I have nothing against her, we are on good terms. We are not friends, but neither do we hate each other.

“I only did it to make a TikTok. I didn’t think this was going to get out of control.”

And responding to others urging him not to make a similar mistake in a future relationship, Uziel joked: “We just have two kidneys and if I already gave one, I only have another one for me, so … I can’t feel it.”

Speaking of break-ups, this bride is flogging her wedding dress for £100 after discovering the groom cheated with her son’s godmother.

This mum was left furious after her husband asked her to quit her job and be a stay-at-home mother after he was offered his dream job.

And this woman pretended to be pregnant after her boyfriend cheated on her.

I’m 24 and my husband’s 54, people say I’m with him for the money or I must have some hidden trauma but it’s true love

A WOMAN shared that she's fed up with people assuming she has trauma or is after money because she is...

Why you should bring up therapy on a first date

How to know when it’s time to end your relationship

‘My partner is miserable after our dream move abroad’