I’m in a platonic marriage

FOR those of you in a committed, loving marriage, the thought of also having a girlfriend or boyfriend at the same time just wouldn’t cross your mind.

You got married because you love your partner and only want to be with them – right?!

Amber has taken to TikTok to open up about her platonic marriageCredit: Tik Tok

Well this isn’t the case for one couple, who are married but actually also have other partners of their own.

One woman, named Amber, has taken to TikTok to share details of her platonic marriage.

Posting on her account ‘buckleupbuttercup4’, Amber has explained that she is in a platonic marriage with her husband and they live together, but they also have their own partners.

Originally, the couple married out of love and then went on to have two children.

However, the couple fell out of love and separated, but when they found they were spending a lot of time together raising their children, they decided to move back in together.

They now live together and co-parent their children, whilst also having their own partners and they say this works well for them.

Amber explained: She said: “So a lot of people have been asking me what is a platonic marriage?

“I think it’s one of those things it’s a little bit different for everyone who’s in one but let me just tell you a little bit about mine.

“My marriage did not start off as platonic – my husband and I married in 2013 and we were in love, we wanted to start a family, we had our first son in 2014 and that was really hard, adding a child really changes the dynamic of your relationship and we just weren’t communicating very well.

“Fast forward to 2017, I was pregnant with my second son and during that time I found myself in a bit of an entanglement.

“So that’s really when I told my husband – this is the situation, I want to separate basically.

“I mean here we are, it’s been a few years now, we lived apart for two years and we’ve been back living together for a year now and the reason we decided to do that is because neither of us wanted to sacrifice time with our kids, even when it wasn’t our day to have the kids, we were always at each other’s place, so if it was my night to have the kids he would stay over from the time he got off work to the time to go to bed and vice versa.

“I was at his house and he was at my house every single day so we decided maybe we should try living together again.

“You know, we were always together, we are best friends now, things are better in our relationship, even though it’s changed and we’re not in that romantic relationship anymore, we still co-exist as friends and as partners and as parents.

“So yeah, like I said, we’ve been living back together for a year now, we don’t really have a plan of how long we’re going to do this, we’re just kind of seeing how it goes.

“We do have an understanding that if at some point one f us wants to make a change, no matter what that reason is, be it we’re just tired of living together or maybe one of us does end up in some sort of serious relationship, whatever the situation is, we’ll cross that bridge when it comes.

“It works for us, we get to be with our kids every day and we save a lot of money on bills.

“We married for love, separated, then decided to live together again and stay married so we could both be with the kids all the time and to save money.”

Many TikTok users were confused at the platonic marriage, leading Amber to further confirm details about the relationship.

She confirmed that her and her husband “split bills and raise the kids together” and are “basically roomates who co-parent.”

She said: “We each have our own bedroom.

“We love each other but it’s more like a love you have for close family members.
“I just want to clarify that my husband and I are the very best of friends – we did marry for love, unfortunately fell out of love but did remain best friends and here we are today.

“So when my husband and I first separated we agreed that we would not get a divorce, unless one of us was in a relationship that would lead to marriage.

“I think sometimes when you’ve been in a marriage the definition of marriage kind of changes for you and getting married again just isn’t a big priority.

“While we are both in long-term relationships, marriage just isn’t on the horizon for those relationships right now.

“But we do have an understanding that one day that might change and when that happens we will have a conversation, make some tough decisions and just split our lives and figure it out.

“It’s not a romantic love any more.

“It is hard at times but so is any relationship.”

In one of Amber’s videos she showed a situation that once happened in her marriage.

Her husband said: “Can you leave the house today for a while so my girlfriend can cover over” to which she said “If you want to pay for me to get my nails done.”

The video then shows Amber in a nail salon having a mani-pedi and showing off the gorgeous pink results.

Clearly her relationship has got people talking as her video has racked up over 1.6million views, 51k likes, 838 comments and 759 shares.

Many TikTok users were shocked at Amber’s platonic marriage and couldn’t get their heads around the thought of ‘sharing’ their partner.

One person commented: “That’s a no for me…I don’t share.”

Another said: “Don’t know how you do it this would be a hell no and a divorce.”

However, there were some TikTok users that could understand the relationship and praised Amber for being so open about it.

One person said: “You can marry your best friend. Marriage is a financial legal contract, not a symbol of love. People date outside of their marriage.” to which Amber said: “Haha thank you so much!! You are awesome!”

Another added: “The longer I am married the more I learn there are many different types of marriage. Good for you!”

A third commented: “I love this so much. Breaking the societal standards of what marriage is “supposed” to be. Platonic marriage is awesome.” 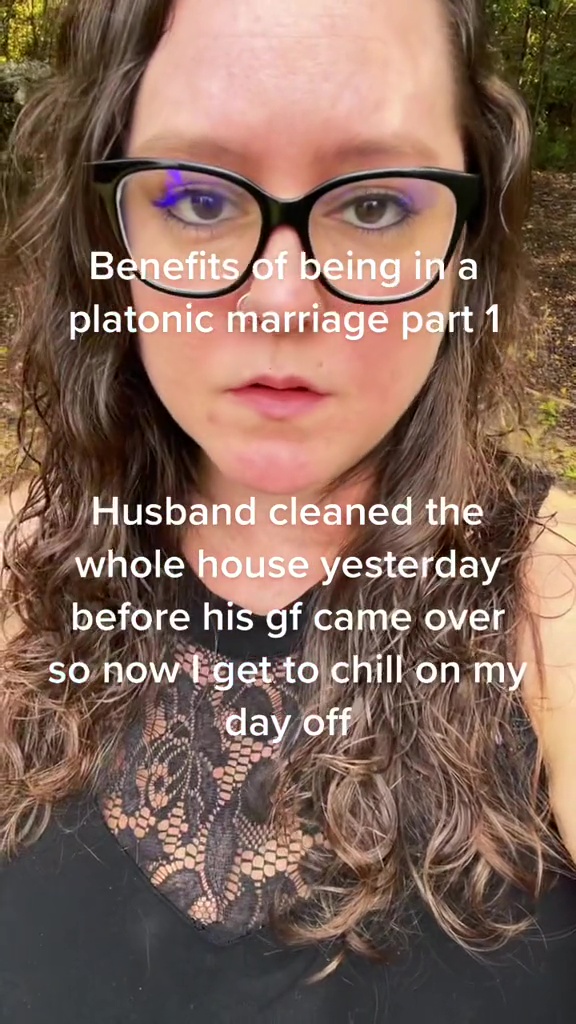 Amber is very happy in her platonic relationship and says it works well for her and her familyCredit: Tik Tok

Meanwhile, I let my partner sleep with other women & even made him a Tinder profile – jealousy turns me on.

Also, I’m a 19 year old swinger – me and my man always get jealous but it doesn’t stop us loving one another.