AS the coronavirus crisis has made traipsing to the shops that bit more difficult, most of us have been turning to the internet to complete our Christmas shopping.

But there a lot of ways in which online shopping can easily go awry – as one woman has recently learnt. 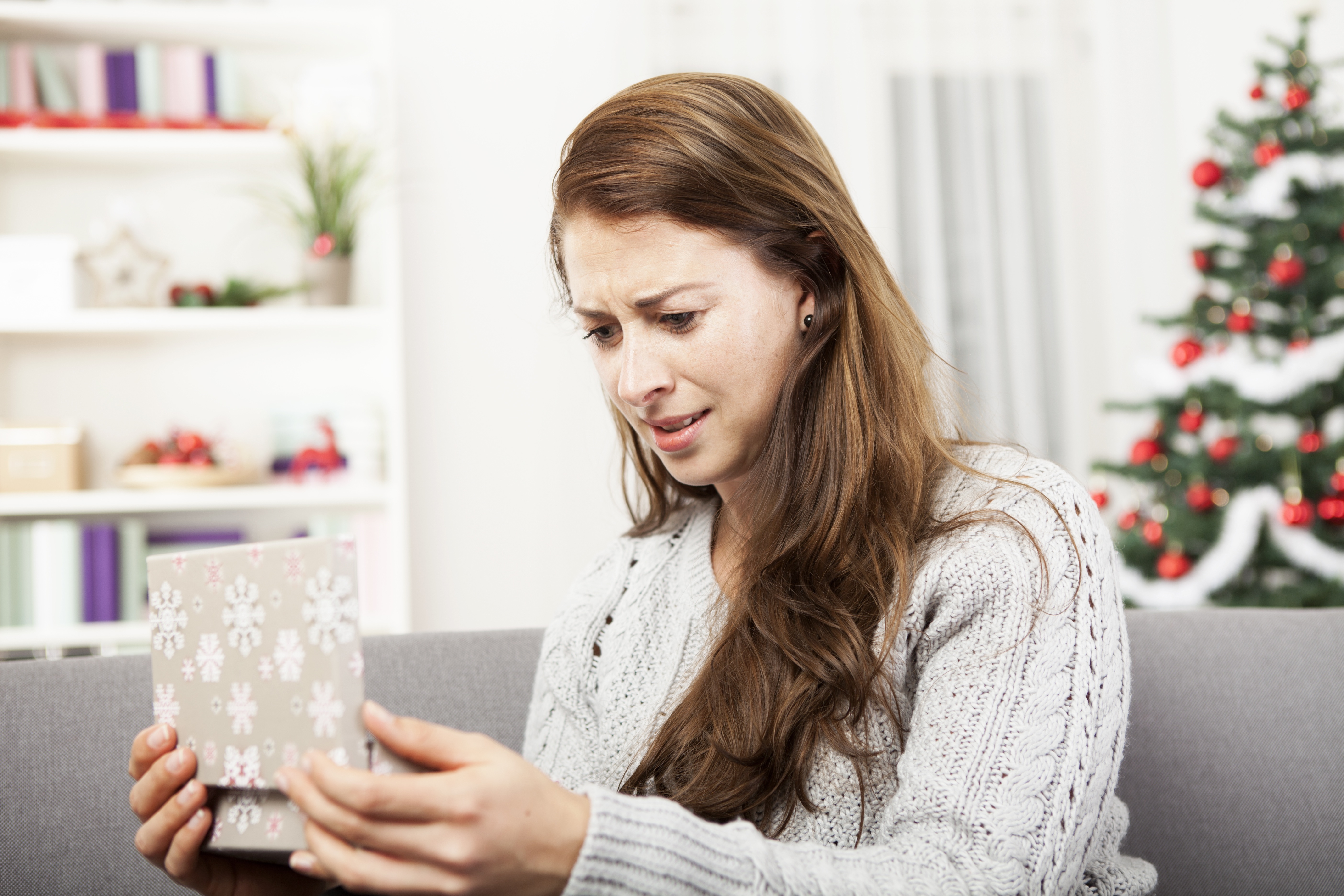 The mum is considering returning her husband’s Christmas gift to her on his behalfCredit: Getty – Contributor

Sharing her dilemma on Mumsnet, the anonymous woman explained how her husband has bought her some fur-lined Crocs for Christmas.

She wrote: “I wear Crocs in the house (judge away) – the last pair I bought was a new style with no holes in and they’re making my feet stuffy and sweaty.

“I mentioned that I might get the original type but fur lined for winter. [My husband] has taken this as a hint and ordered some for me for Christmas, which is nice.”

While he was at work today, the woman got a delivery notification to say that her husband’s present was arriving – but when she looked closer, she discovered that he’d ordered the wrong ones.

She shared the dilemma on MumsnetCredit: Mumsnet 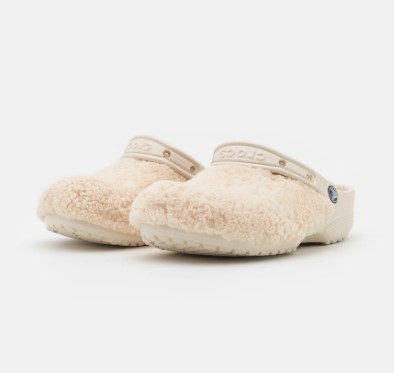 She wanted some fur-lined CrocsCredit: Mumsnet

She continued: “He’s chosen some fur lined with no holes so will probably be more sweaty than those I moan about. They’re not a colour I would have chosen – although I could live with it.

“They’re a cheaper knock off brand so wouldn’t last as well, but more importantly they’re size 3/4 and I’m 7/8.”

Describing how he’s “s**t at presents”, the woman is now considering sending them back on his behalf and ordering the ones she wants.

Asking others for advice, she added: “Do I send them straight back and ‘helpfully’ choose something that will at least fit and that I would want to wear? Or do I leave it to him to sort out after Christmas?” 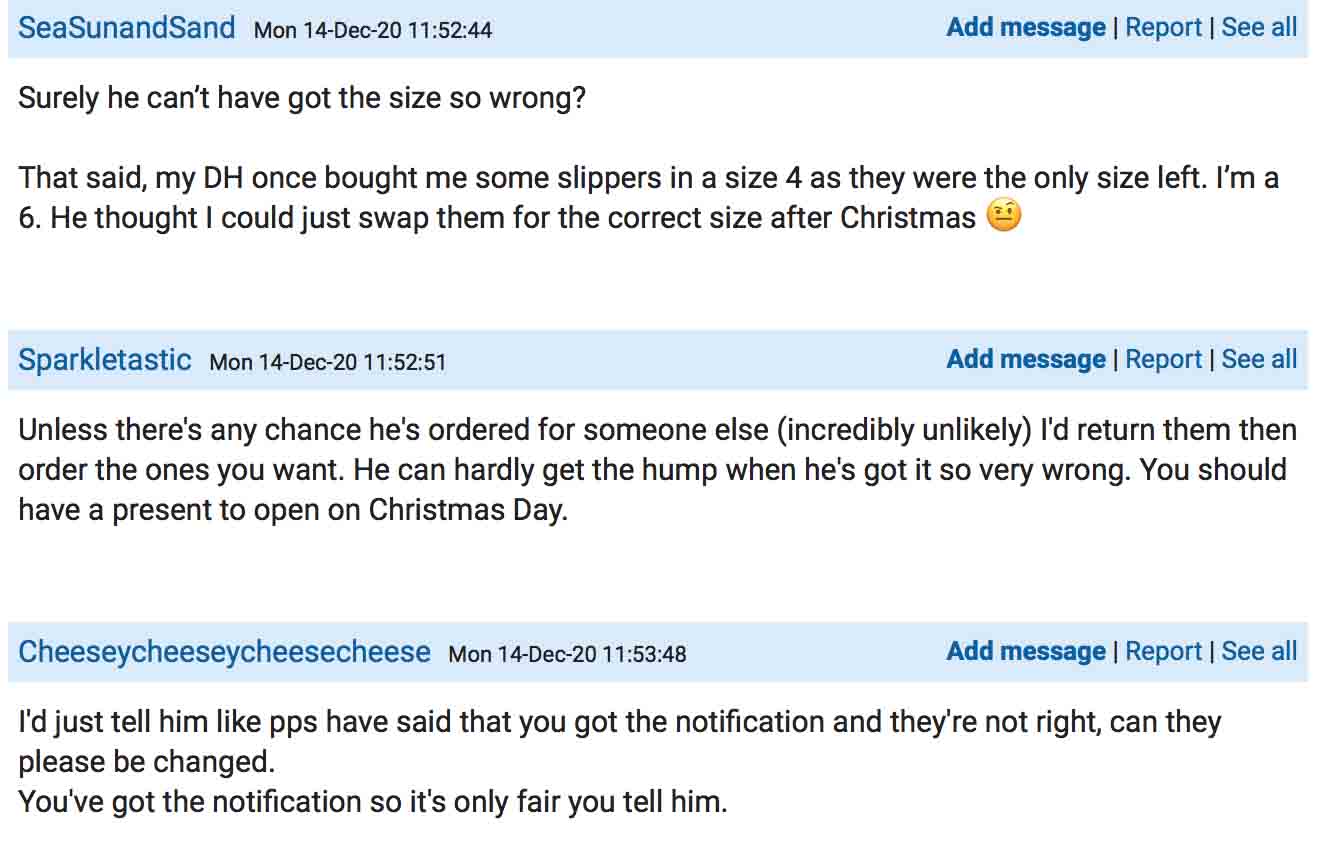 Other users slammed her for the ideaCredit: Mumsnet

The dilemma sparked fierce debate on the forum – but the majority of members argued that she should leave it for her husband to sort himself.

One replied: “I would bide my time, wait until Christmas Day and then if you get the shoes in the wrong size you can send them back knowing that they were for you.”

Another said: “My husband has done this sort of thing before and I’ve also discovered it prior. To be honest I just told him and it wasn’t a big deal. He’d rather I had something I liked. Now I send him links to specific items he chooses from to avoid the situation.”

Taking her side, a third wrote: “Unless there’s any chance he’s ordered for someone else (incredibly unlikely) I’d return them then order the ones you want. He can hardly get the hump when he’s got it so very wrong. You should have a present to open on Christmas Day.”

For more relationship stories, this ungrateful woman returned a ‘cheap’ £2,200 engagement ring because groom didn’t spend 10% of his wage on it.

And this bride-to-be was slammed for taking out her phone to upload a photo of her engagement ring BEFORE saying yes.

Plus wedding shamers blasted bride for wearing a dress she can’t ‘walk, sit or dance in’.