DATING can be a minefield.

So when this woman got accused of skirting the cheque, she had to set the record straight.

In the Tiktok video, which has 1.5million views, Nikki shares the full story of her date.

She explained: “So we matched on a dating site, we went on a date, we absolutely hit it off.

“We spent six hours together, he made a reservation for a restaurant that he chose.

“We met there, we had dinner then we left we walked around the little town we were in and ended up getting some ice-cream.

“Which I paid for, which is important.

“Then we went to another restaurant just got a couple drinks cos we wanted to keep talking but it was really cold out.

“After this date he texted me saying that he wanted to see me before he left for this work trip on Wednesday.

“The date was on a Sunday.

“So we tried to sort that out, it didn’t end up working out so instead he told me ok cool since I come back on Saturday I’ll just reserve Sunday to see you, we’ll do something, we’ll figure out details once it gets a little closer.

“So basically this man goes to LA on his work trip, he leaves on Wednesday and he kind of completely disappears.

“He goes MIA which I kind of understood to an extent because he was on a work trip but he wasn’t really communicating with me at all.

“So as you can see, finally on Friday I texted him just like ‘hey look I know you’re busy with work but you know did you still wanna see each other on Sunday?’

“This man as you can clearly see never answered that message and that was kind of that, I never expected to hear from him again,” Nikki said, accepting that the man had rudely ghosted her.

“However, on Christmas, even though the screenshot says today, I screen shotted this on Christmas, he reached out to me and said this,” she said as she showed her texts in the background.

“So after he came back with that half assed apology, half assed reply I basically was very polite about it.

“I was like look what do you expect from me are we just gonna forget that you disappeared and you couldn’t even at least be honest that you weren’t able to see me last Sunday.

“Again I thought my response was very polite and in line,” Nicki said as she showed her responses to him.

“I sent him a picture of my tree like he wanted to exchange tree pictures.

“He comes back with this excuse and there’s a lot of things wrong with it.”

As she moved, viewers could see his response where he called Nicki, ‘rude and cheap and really disrespectful.’

“I left to use the restroom right before the cheque came and I didn’t know the cheque was coming, I can’t read a waiters mind

Nicki then showed his messages which made her ‘even more mad.’

After she politely tried to end the conversation the man continued, claiming she had picked the restaurant and accusing her of using him for his: “f***ing trust fund”.

“So he’s telling me that I picked the restaurant, I did not.”

“I’m actually really not familiar with the town that we were in, he picked the restaurant and made the reservation

“Of course I ordered what I like because what am I gonna do, order something I don’t like.”

“Honestly he is absolutely ridiculous.”

“First of all he’s talking about a trust fund – how do I know you have a trust fund?” she asks, letting viewers read the texts behind her.

Viewers lapped up the story of the man’s poor dating skills and reassured Nicki it was not her fault, saying: “Only a broke dude will come at a girl for not offering to pay on a FIRST DATE!!”

“Plz I’m so embarrassed for him.. if he’s broke just say that lmao,” said one, holding back laughs.

One commenter offered up general relationship advice, saying: “gaslighting, dissappearing for days, some outrageous story to cover up his absence, ladies don’t ever think this behavior is normal or okay.”

“Trying to date in this day and age is absolutely WILD,” wrote another.

One commenter who has had their fair share of dating said even they had never seen something so bad, as they wrote: “I have never been more grossed out in my life and I was single and actively dating in Manhattan for 10 years.”

While another offered their experience, saying: “As someone who’s only dated men w money, and has dated someone w a trust fund…. this man is broke.” 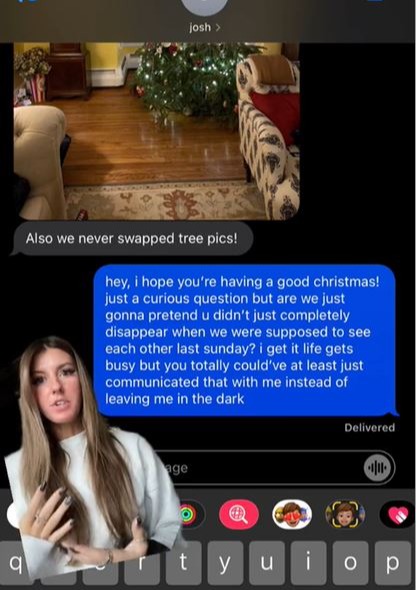 One commenter thought it was sweet they wished each other a merry christmasCredit: Tik Tok/ __nikk1 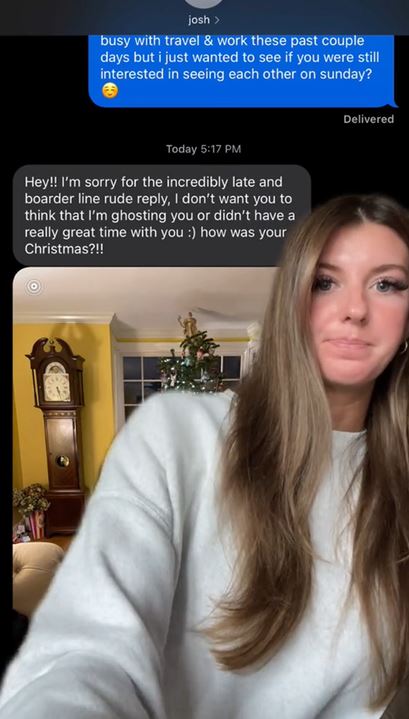 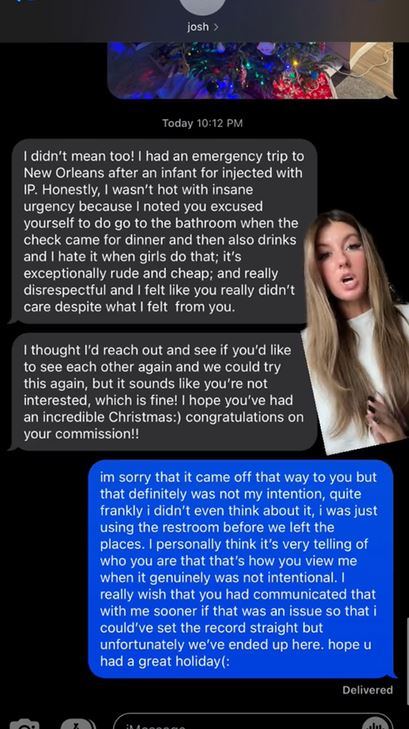 Many also picked holes in his grammarCredit: Tik Tok/ __nikk1

For more dating stories, check out I was madly in love with the guy I was casually dating – a mortifying Snapchat I sent to my best friend had him running

Plus, me and my Tinder date I’d just met were forced to isolate after we both tested positive for Covid but it wasn’t all bad