IF you’ve ever experienced the heartbreak of being cheated on, you’ve probably heard some of the worst excuses under the sun.

But while acting out of revenge or anger may be one of the most common reasons given for philandering, one woman, from the US, was left gobsmacked by her boyfriend’s “gross” explanation.

An anonymous woman, from the US, took to TikTok and videoed her other half as he admitted he allegedly cheated on her because she had been giving more attention to their sonCredit: Tik Tok

Taking to TikTok, the anonymous woman, from the US, videoed her other half as he admitted the shocking reason as to why he allegedly cheated on her.

Speaking of the time shortly after their son was born, he can be heard saying: “You were giving him all of the attention so every time I went to work, everyone at work was giving me attention – that’s why I did it.”

The woman went on to ask him whether he realised she was taking care of their child.

“So you cheated on me because I was giving our son all of the attention, and you go to work and find attention elsewhere?” she continued.

Do you know what an a*** you sound like? You sound completely pathetic – that’s why I’m not letting you back in the house – that’s exactly why.”

In the background, the alleged love rat can be heard asking whether he can just move back in.

Any many social media users were left gobsmacked by the revelation and were quick to take to the comments section to express their disgust.

“So his competition was his baby boy? Wow,” wrote one, while a second penned: “He’s a whole child. Please move on sis.”

You were giving him all of the attention

A third noted: “He needs to grow up. Adults tell people when they have an issue, they don’t ruin people’s lives because they can’t handle simple communication.”

Elsewhere, a fourth raged: “This dude really decided that he needs more attention than a literal baby and those needs are more important wth. I’m so sorry, stay strong!”

A further added: “If a man gets mad at u for giving ur attention to your children, huge red flag, narcissist, obsessive etc.” 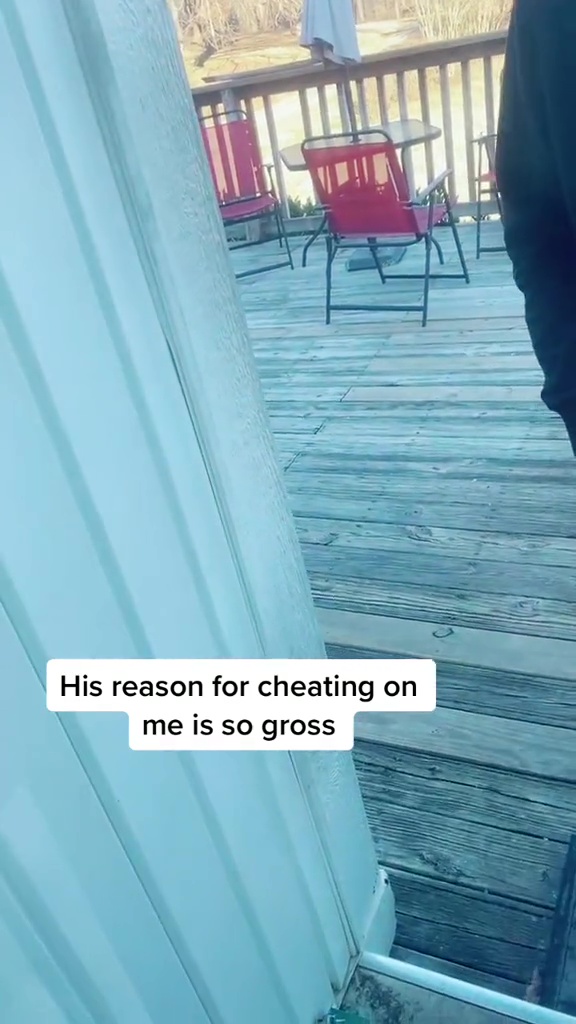 The woman said that her partner’s reason for cheating on her is “so gross”Credit: Tik Tok

And speaking of cheaters, this woman got the ultimate revenge when her boyfriend cheated on her six months ago.

Another woman shut down her Tinder date by sending him the wrong voice note.

And this lady took things too far by faking her own kidnapping to get her boyfriend to answer his FaceTime call.

My date was late, sweaty and in a running bib after finishing a 10k

How I Made It: ‘I’ve been a sex influencer for over 10 years’

Speed dating is back – after lockdown, is it any wonder?

How I Do It: ‘Since meeting my partner, I’ve realised I’m pansexual’