Pets often are considered members of the family and loved as much as a human baby would be. But not everyone shares that sentiment and they think, rather, that animals are always less important than humans, disregarding the fact that people can form bonds with their pets that are even stronger than those with people.

Even though pets can’t talk, they show affection and will never judge you and others find comfort in that. They will choose their pet over a person they love if the need comes. And it sometimes comes. Like for the Reddit user catwoesthrowaway who shared a story how her boyfriend didn’t like her cat and one day she just asked him to leave.

This woman tells a story how her boyfriend with whom she was living really didn’t like her cat, and one time she really was scared for her, so she asked the boyfriend to leave

The Original Poster (OP) is a 24-year-old woman and she was living with her older boyfriend at the time of telling her story. The boyfriend had actually moved in with her after considering it for a while.

The woman has a cat named Millie and the boyfriend wasn’t very fond of her. He actually suggested that she should get rid of her, because he really dislikes cats and is more of a dog person. At first this attitude wasn’t concerning for the girlfriend and she just dismissed it. Also, he was willing to deal with it because the cat was so important to the woman. 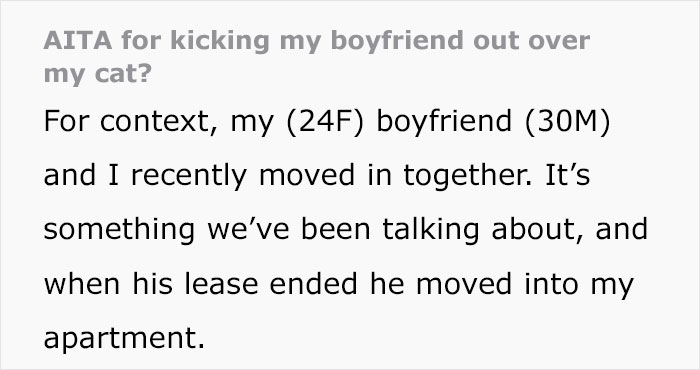 Even before starting living together, the boyfriend made it clear he didn’t like cats, but the girlfriend didn’t take it seriously 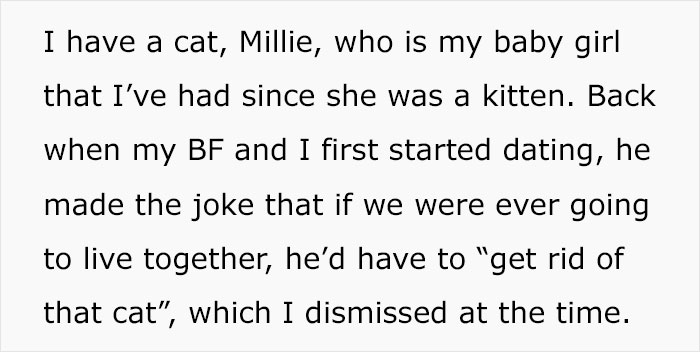 But there was an incident and the OP wanted to hear what the situation looks like from a bystander’s point of view. So what was the breaking point was the woman hearing her boyfriend say to Millie “You’re so f*****g worthless.”

She described that there was so much malice in that tone and that the woman had never heard her boyfriend talk like that. She really got scared and started freaking out. The woman told her boyfriend to leave her apartment, not caring that he has no other place to live. 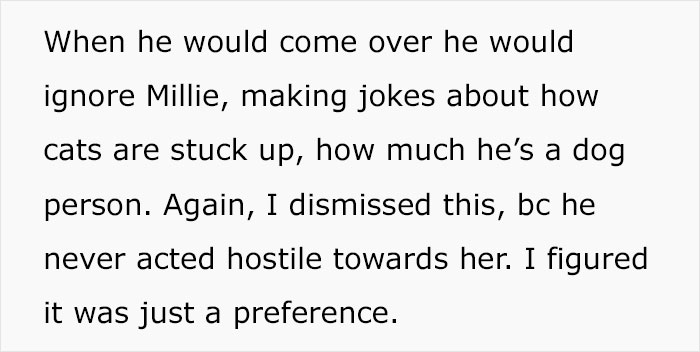 But when they started to plan to live together, she found out the boyfriend wasn’t joking, but she wouldn’t abandon her cat

The redditor calmed down and that same day talked to her boyfriend. He explained that he felt hurt the way she said that the apartment was hers and not theirs. He also was upset that she would choose an animal over a human being. Regarding the way he had talked to the cat earlier, the boyfriend explained that he was just playing and had misjudged his tone.

At the end of the story, catwoesthrowaway admitted that she felt bad for acting the way she did, but she believes her first instinct was correct, so now it is up to the reader to decide on which side of the fence they stand.

The boyfriend was willing to deal with it but one night, not knowing his girlfriend was near, he was mean to the cat

If you’ve made up your mind, the story actually doesn’t end here. The redditor wrote an update post and we got to know the aftermath of the evening. The woman felt relieved that people in the comments just confirmed what had crossed her mind already. She said, “that post validated all the fears that I had kept dismissing as dramatic, and it was almost a relief to be encouraged by strangers to do something I had previously been too afraid to do.” 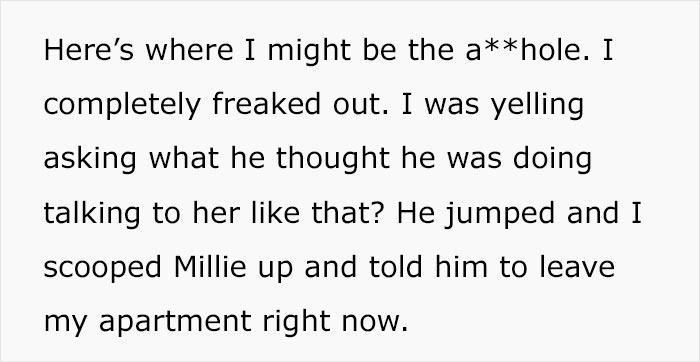 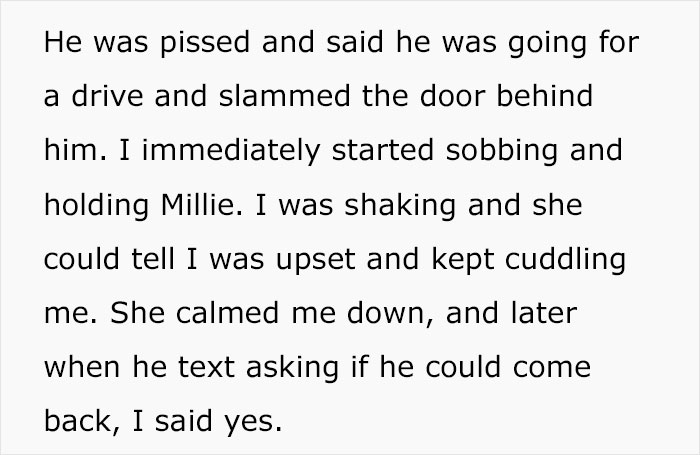 Turns out, the couple broke up. The boyfriend had to leave as the apartment was OP’s and he wasn’t on the lease yet, so it was an easy process. It was easy logistically, but not emotionally as the woman opened up, “It was hard to lose somebody I trusted and thought I knew well, but based on his reaction I knew I made the right call. He essentially told me that if I couldn’t learn to put other humans before my cat, I’d be alone for a very long time, and that he’d be waiting for me to reach out.”

When they both calmed down and talked, the boyfriend expressed what was hurting him, and the OP was feeling bad for acting the way she did 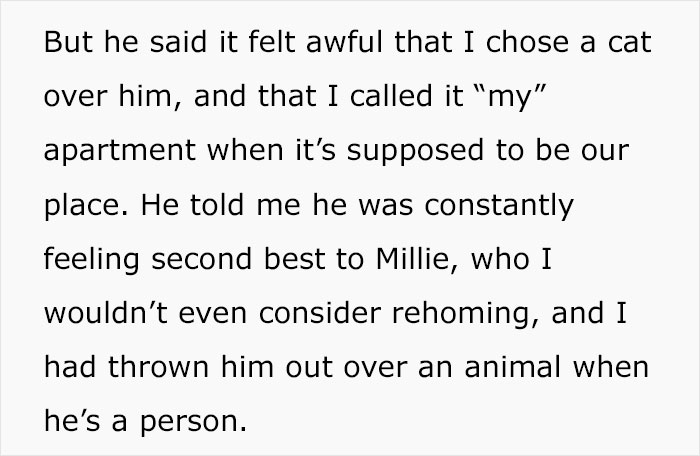 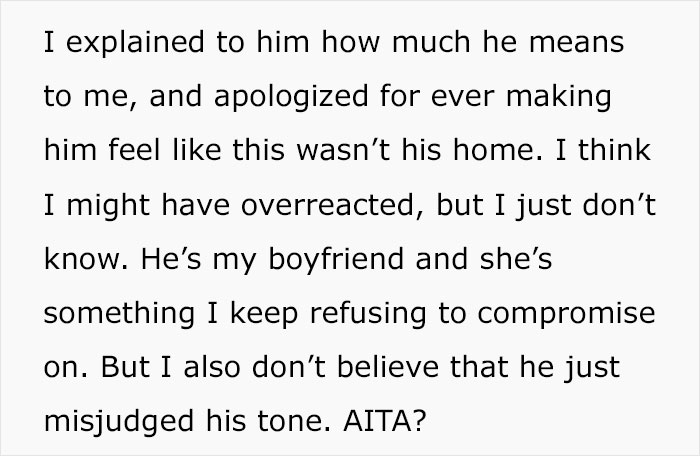 Many people mentioned that catwoesthrowaway was being gaslighted and it was not the first time she had heard that about her boyfriend from somebody else, because her sisters agreed with the internet’s opinion. The OP added a photo of Millie and we put it at the beginning of the article for you to see the cuteness.

Now we would like to hear your opinion and thoughts. Would you say that the woman was the bad guy in this situation or do you see red flags in how the boyfriend was acting? Have you ever been in a similar situation and how did you solve it? We learn a lot from your experiences!

People in the comments were actually concerned for Millie and saw many red flags, so they came to the conclusion that the OP didn’t do anything wrong 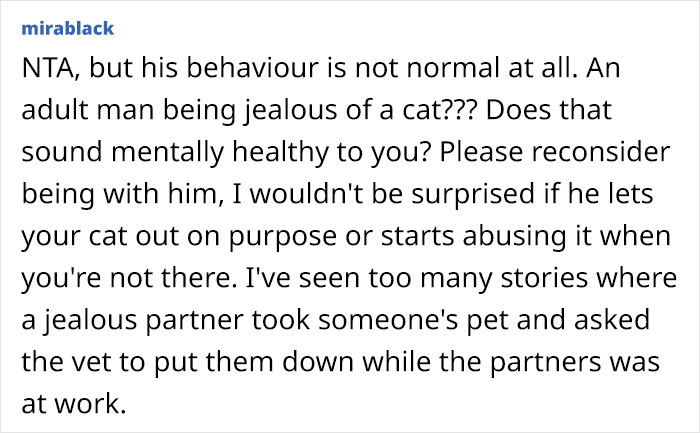 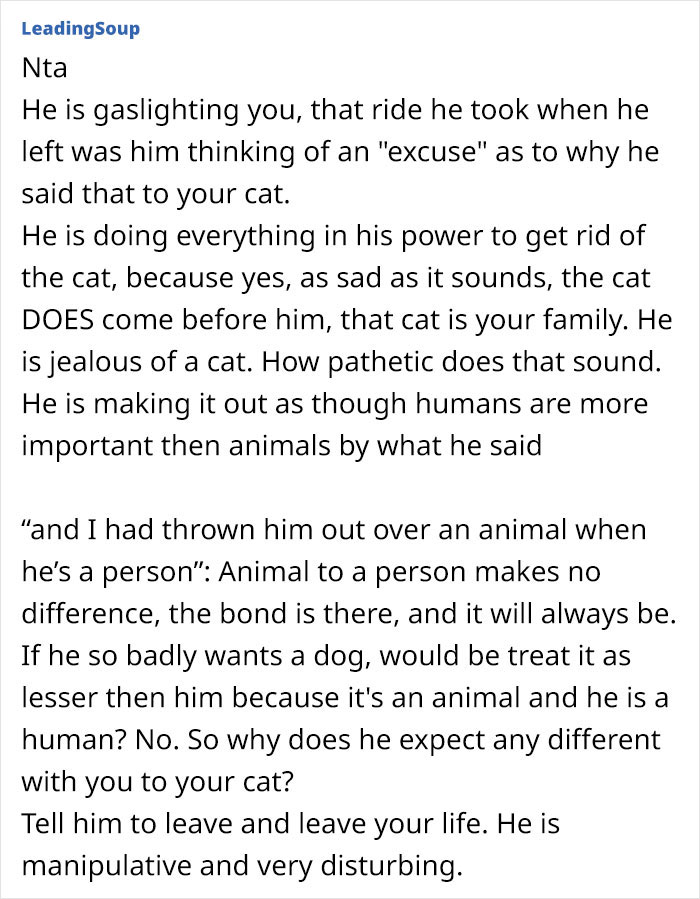 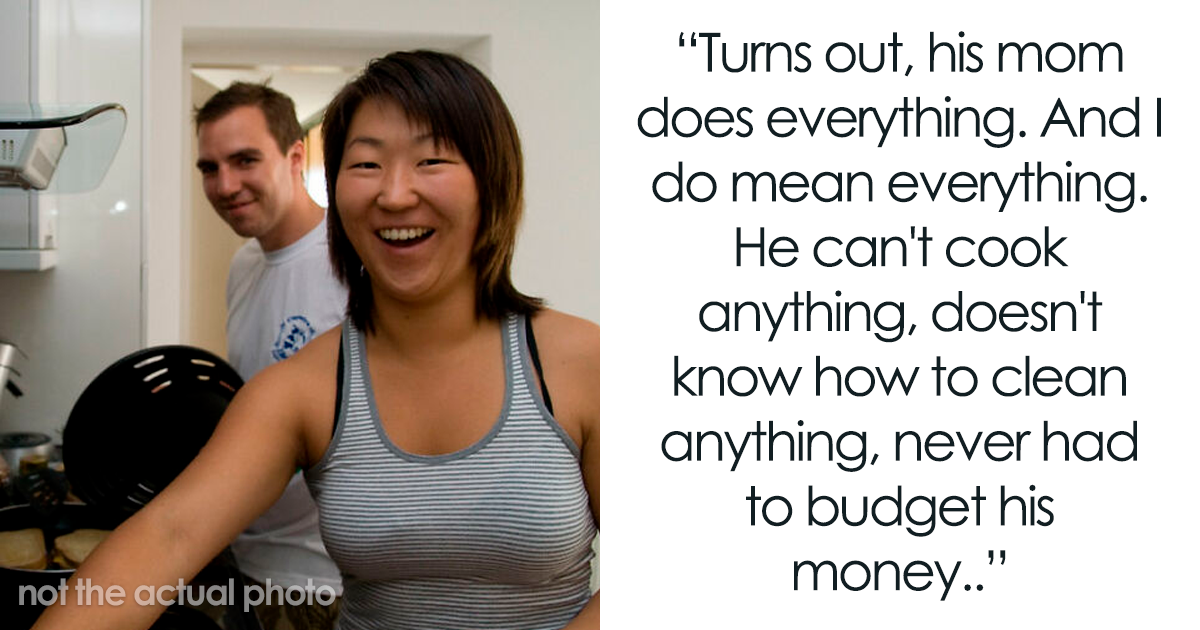