WE don’t know about you, but we try our very hardest to take stunning photos of our friends and family members.

It seems the same can’t be said for some men, who have been shamed on social media by their long-suffering girlfriends. 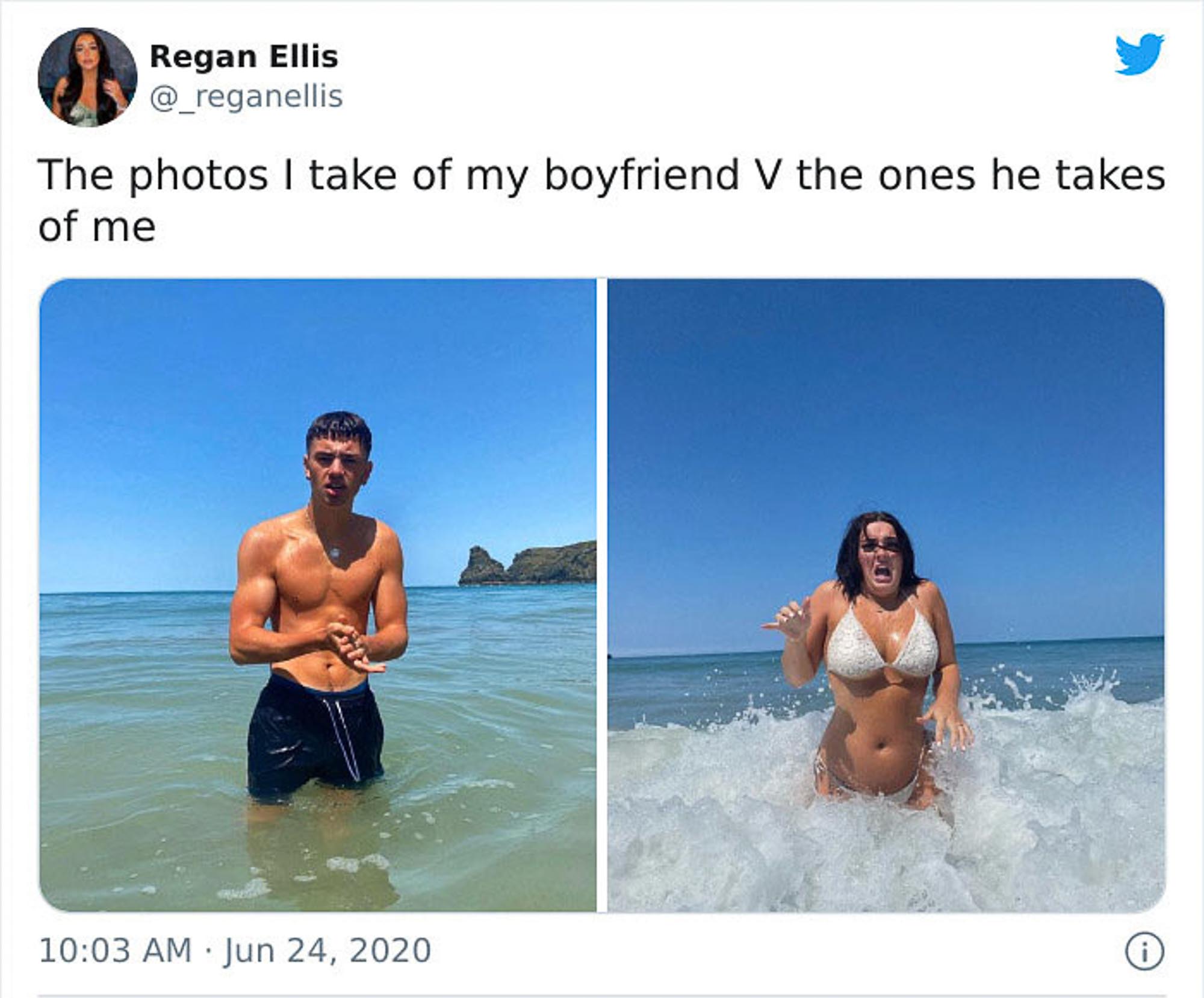 I don’t sea the problem? One bloke snapped his girlfriend just as a wave hit her Credit: boredpanda

The latest trend sweeping social media sees women posting the photos they take of their boyfriends, contrasted side-by-side with those snapped by the men.

Posting on Twitter and TikTok, woman are showing off the perfectly composed, flattering and well lit photos they have taken of their boyfriends.

But rather than returning the favour, the blokes snapped photos from bad angles, pressed the shutter when their other half wasn’t ready or even took pictures of their girlfriends asleep.

One woman’s sexy photoshoot in the sea very wrong when she was hit by a huge wave as she posed in a white bikini. 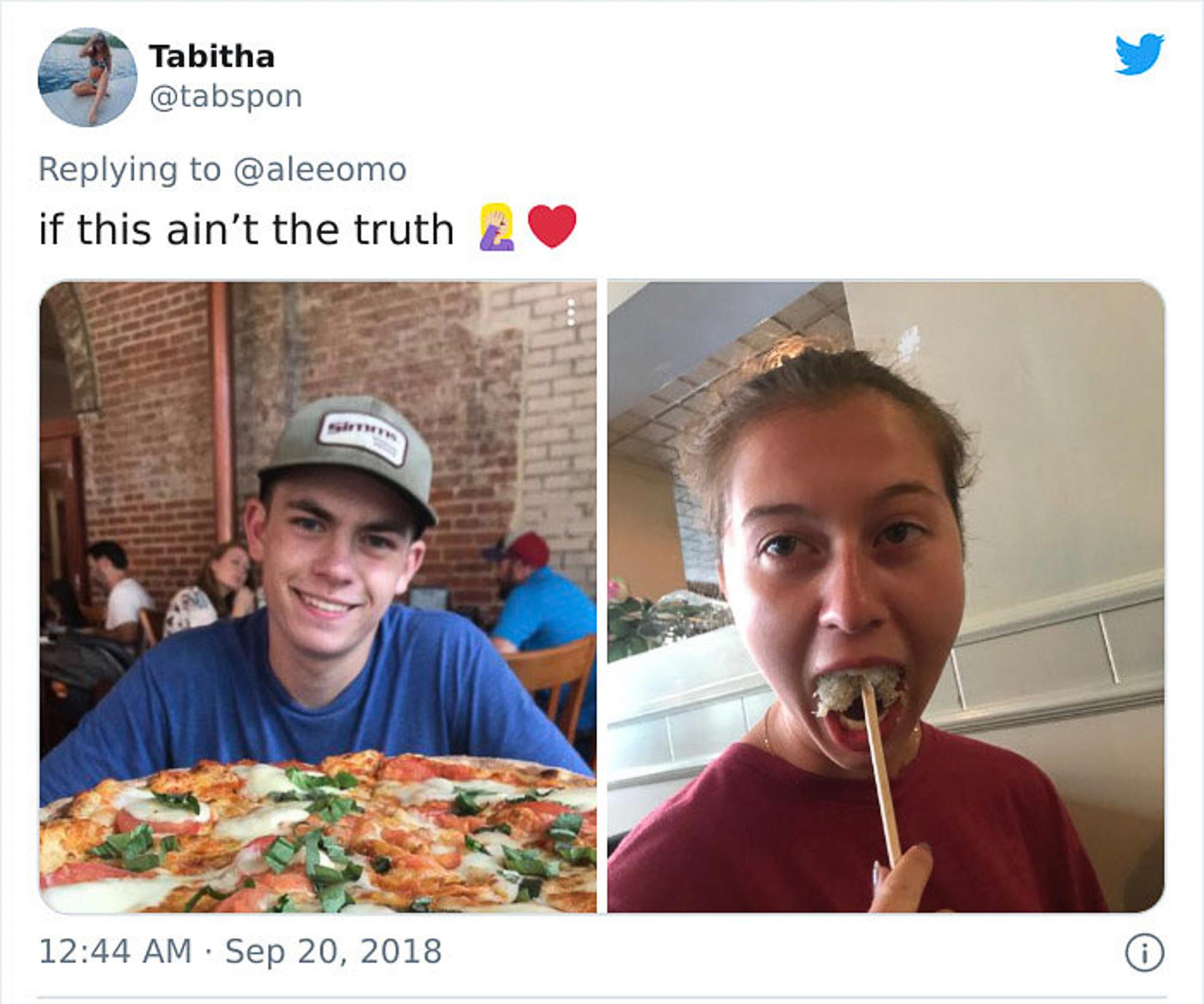 She might have a pizza his heart, but this woman was fuming when her boyfriend took this unflattering photoCredit: boredpanda 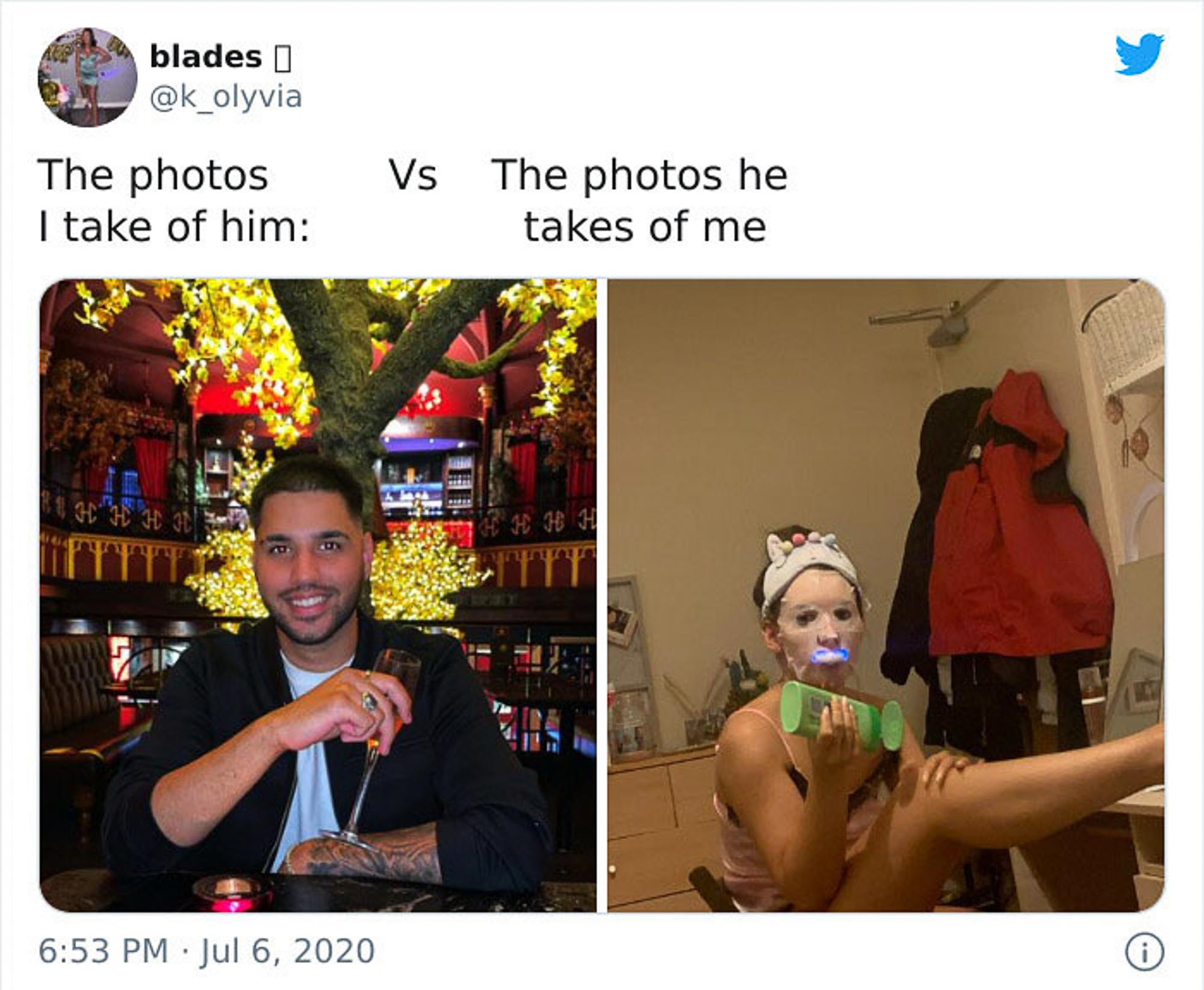 While this Twitter user photographed her man at his best, he didn’t return the favourCredit: boredpanda

Instead of warning his girlfriend of the incoming wave, the funny fella decided to let the sea ruin her moment – and he caught the whole thing on camera.

After snapping a stunning photo of her boyfriend looking pensive in a snowy back garden, one woman expected him to take a similarly pretty picture of her.

But it seems photography isn’t his strong point, as the woman in question received a photo highlighting the size of her forehead in return.

Not to be outdone, a number of women shared sweet snaps of their partners taken on dinner dates. 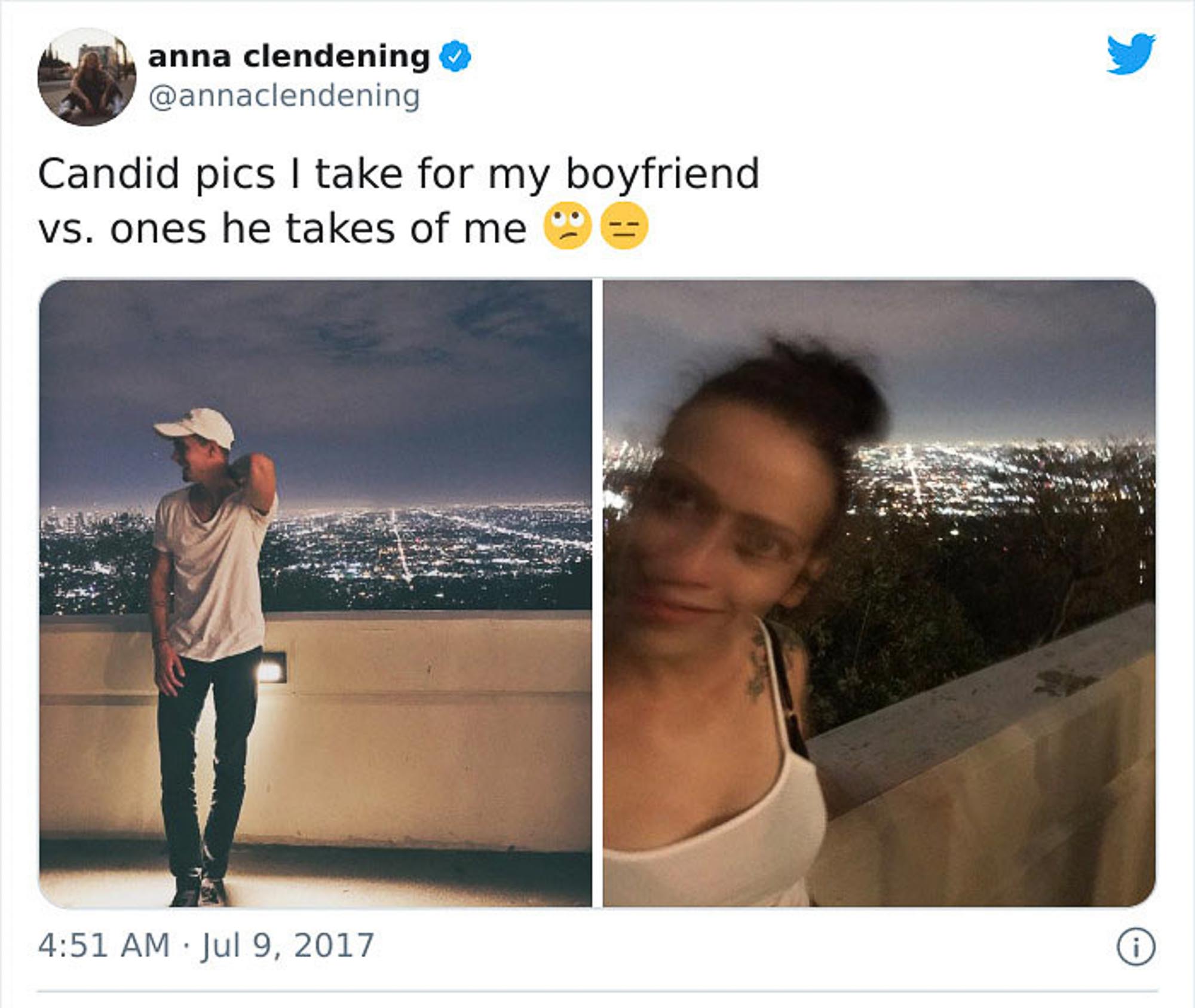 It’s a bit of a blur for this poor woman whose other half needs a few pointers on his photographyCredit: boredpanda 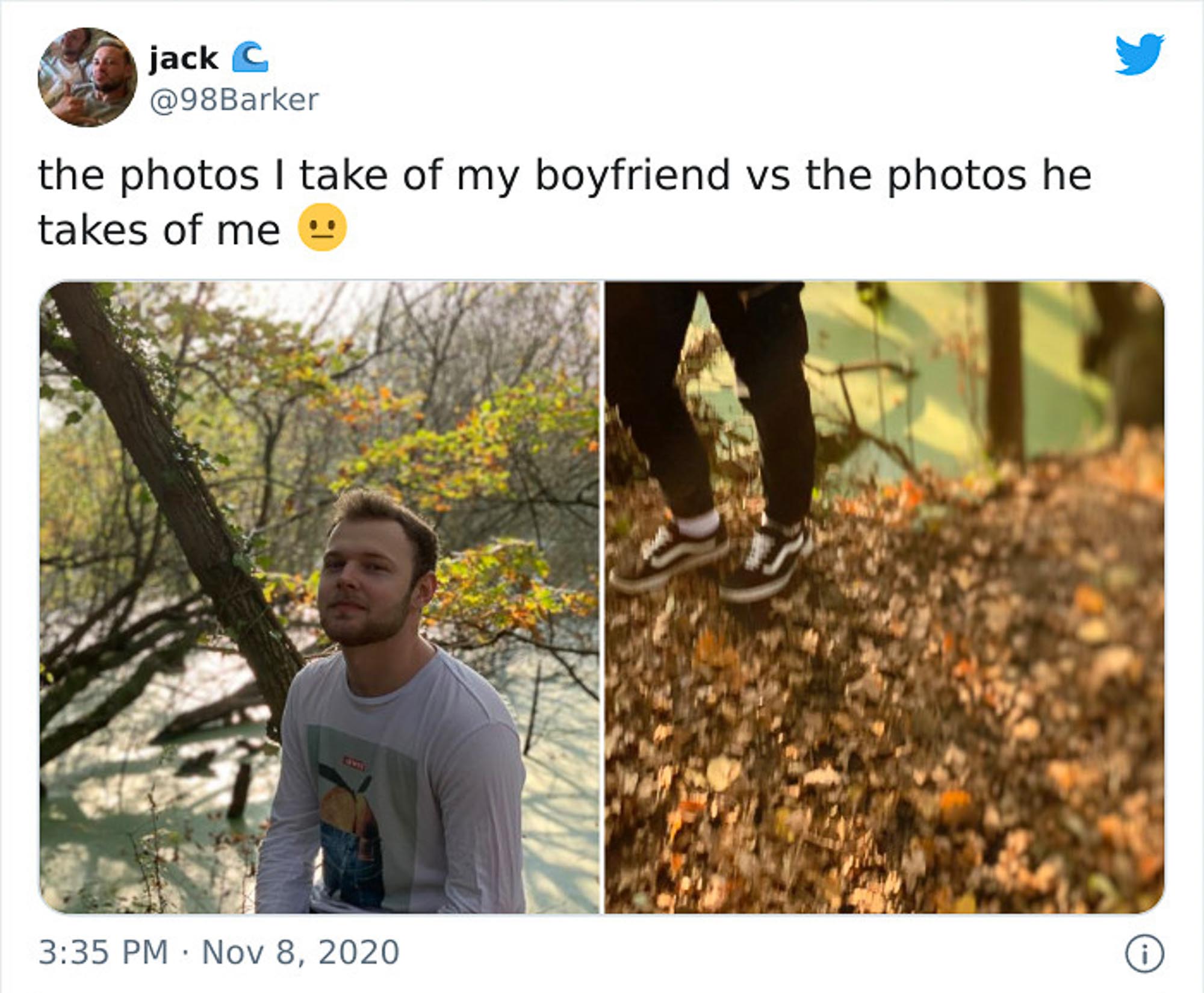 This man missed his girlfriend’s face entirely, snapping a photo of her shoesCredit: boredpanda

While their photos show the men looking like the height of sophistication, the blokes decided to capture their other halves in their least attractive moments.

One woman revealed her boyfriend took photos of her with a face mask on while wearing a towel on her head, while another was photographed shoving food into her open gob. 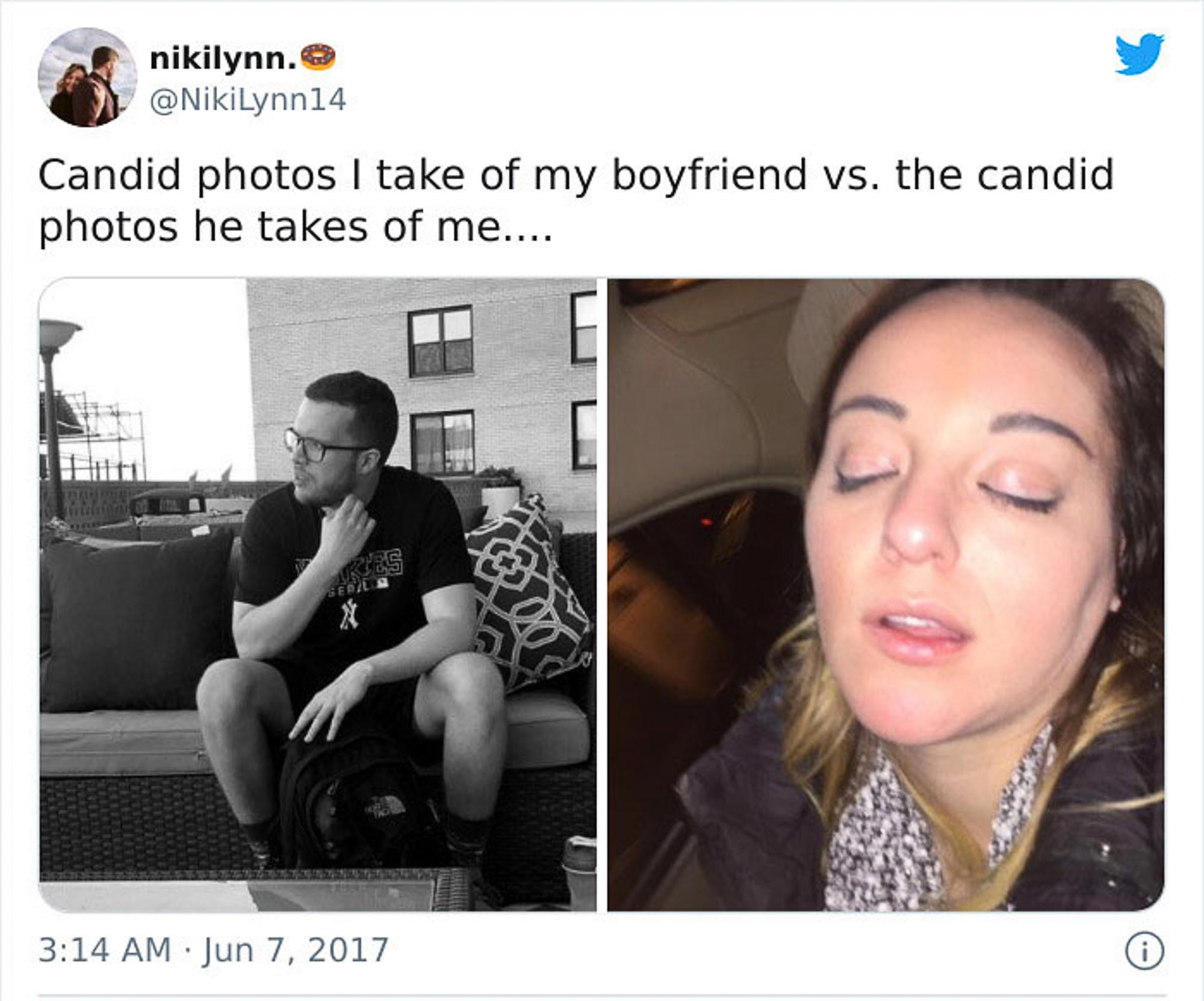 One woman wanted her boyfriend to take flattering candid photos – but she ended up getting photographed asleepCredit: boredpanda 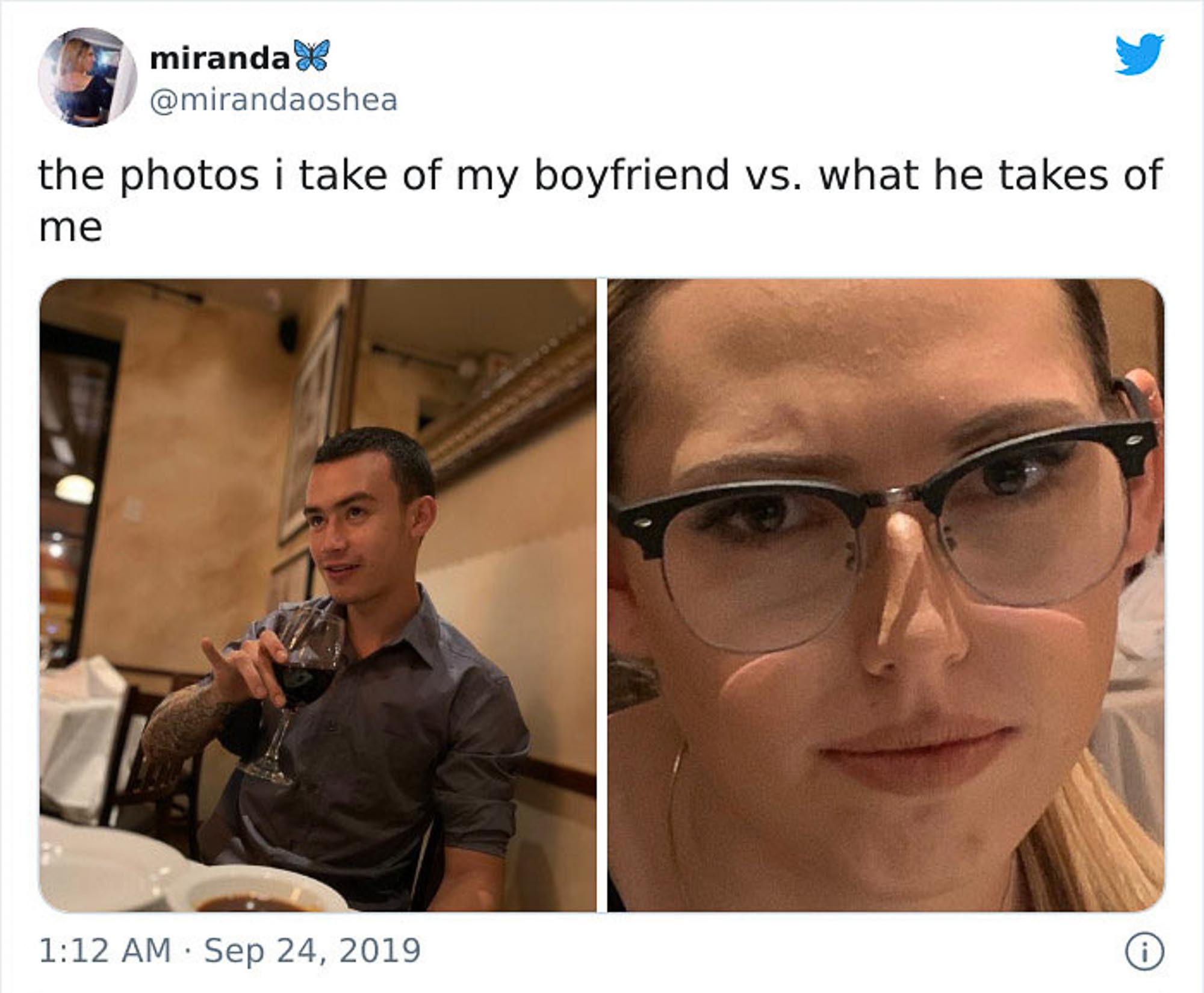 While this bloke looks suave with a glass of wine, his girlfriend was captured frowningCredit: boredpanda

The trend is sweeping through TikTok too, with women showing the kids of photos they would love their boyfriends to take, contrasted with the unflattering ones they recieve.

Using Instagram influencer and former Love Island star Molly-Mae Hague as an example, one TikTok user complained of her boyfriend not stepping up to the plate and taking photos like other boyfriends do.

Sadly there’s only one Tommy Fury and he’s already pre-occupied taking photos of his other half.

In other news, people are sharing SEX spreadsheets with ex’s kissing & bedroom performance ranked out of 10… and whether they regret it.

Elsewhere, a woman was baffled after her topless snaps were banned from a dating app because they weren’t ‘taken outside’.