Congo in Dialog – a photographic chronicle | Artwork and design

The 11th Carmignac photojournalism award is dedicated to the Democratic Republic of the Congo (DRC) and to the human, social and ecological challenges it faces today. It has been awarded to photojournalist Finbarr O’Reilly. His reportage was due to start in January 2020, but because of the global coronavirus pandemic and gradual closing of international borders, the mission as originally planned was put on hold. O’Reilly and the Carmignac team came up with a new approach, creating Congo in Conversation – a collaborative online chronicle addressing the human, social and ecological challenges that DRC faces through close cooperation with Congolese journalists and photographers.

In this essay we feature the work of some of the photographers taking part in the project. Raissa Karama Rwizibuka examined environmental issues in Virunga national park, and fashion and self-confidence in a post-colonial context. Arlette Bashizi captured the realities of confinement in a country with unreliable electricity. Moses Sawasawa looked at politics and insecurity caused by the ongoing conflicts, along with Dieudonné Dirole. Ley Uwera photographed Ramadan under lockdown, and the challenges of living through a pandemic where access to water is severely limited. When the Black Lives Matter movement turned the world’s attention toward global anti-racism protests, Pamela Tulizo examined aspects of our collective post-colonial psychology, but also ideas about African women and beauty. 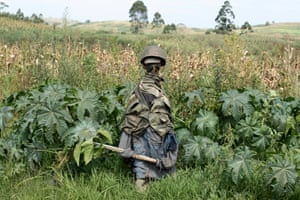 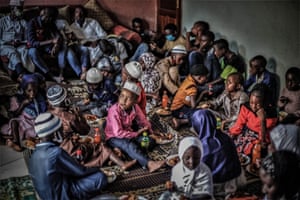 One of the lowest countries in the human development index (HDI) ranking, its literacy level is rising, but public health is in a state of abandonment, and violence towards women and children is endemic. Despite having the largest freshwater resource in Africa, it has the lowest level of access to drinkable water. It has one of the worst records in terms of transport infrastructure. It also tops the charts globally in terms of deforestation and the monopolisation of land and raw materials. 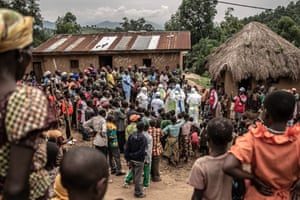 With the coronavirus pandemic, DRC is facing the worst global health crisis in a century while also managing the second-deadliest Ebola epidemic in history and the world’s deadliest measles outbreak. Decades of conflict and misrule mean that a lack of access to basic health care has caused millions of preventable deaths from easily treatable diseases such as malaria, cholera and diarrhoea.

Hospitals often lack basic equipment and staff and run out of essential medicines and supplies. The country has made measurable progress in recent years, as a result of improved leadership, coordination and investments in priority health issues by the government and international partners, according to the United States Agency for International Development (USAID). 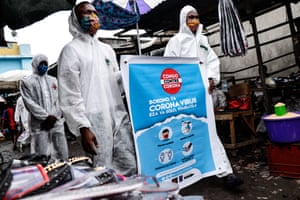 For the people of DRC, life in the time of coronavirus has been no more difficult than during the Ebola crisis, the measles epidemics, the lack of drinking water and electricity, the absence of infrastructure, the endemic violence, the sporadic killings, the police brutality and the widespread corruption. It is merely a little more complicated … 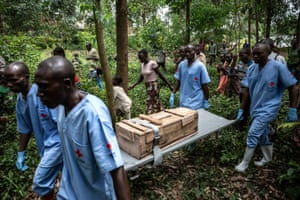 The Congolese have adapted to imposed confinement and to the new sanitation rules – which are in fact difficult to apply – with a mix of obvious resignation, faint resistance and slightly blasé humour. Amid the vast country, from Kinshasa to Goma, the protective mask is at once a banality, a shield and – for the trendy – an affirmation of liberation and individuality. DRC, a country of 90 million inhabitants, has recorded fewer than 300 deaths from Covid-19. Here, the values of community, beauty and pride are not empty words. 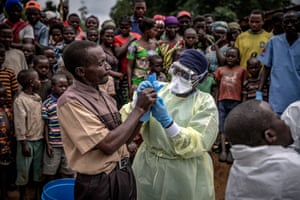 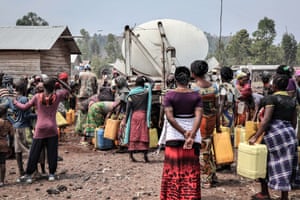 DRC is Africa’s most water-rich country, holding more than half of the continent’s fresh water reserves, but 75% of people have no access to safe drinking water. Lack of access to water and sanitation, coupled with poor hygiene, are among the top five risk factors associated with death and disability in the country. The lack of access to clean water is putting millions of people at greater risk of contracting coronavirus. People often walk long distances to collect water, a task that mostly falls on women and girls, putting them at risk of sexual violence in remote areas. The government’s poor basic infrastructure and lack of funds for maintenance of the state water provider Regideso means that foreign donors provide nearly 99% of water sector financing in DRC. 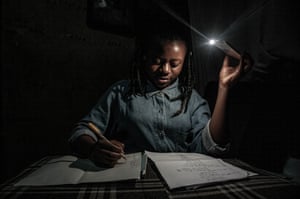 DRC has one of the lowest electrification rates in the world at just over 9%, with 1% in rural areas and 19% in urban areas. 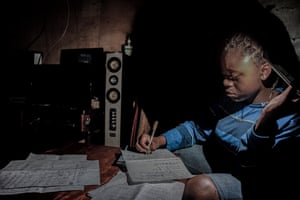 The country hosts large hydrology reserves and has a potential to install up to 100,000MW of hydropower capacity. With an ambition of providing 65% electrification in 2025 and universal access by 2050, DRC faces issues in governance, electric utility performance, effective policymaking and implementation of existing plans. 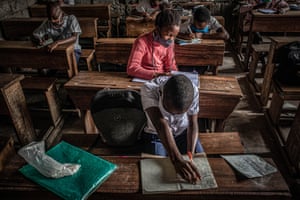 Two small hydroelectric plants financed by the EU and Howard Buffett, son of the billionaire businessman Warren Buffett, have begun operating in Virunga park on the DRC-Rwanda border. Four more are planned near the park. The small-scale power plants are crucial to an ambitious attempt not only to protect Virunga – Africa’s oldest national park – from threats including armed militias, deforestation and oil prospectors, but to jumpstart the local economy and potentially help stabilise one of the world’s worst conflict zones. 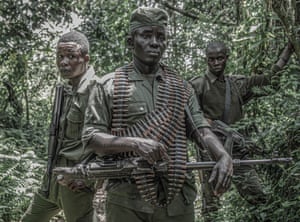 Virunga national park is a Unesco world heritage site that sits on the forest-covered volcanoes of central Africa. Virunga is the continent’s oldest national park and largest tropical rainforest reserve, covering 7,800 sq km, and home to more than half the world’s population of mountain gorillas. The park has been repeatedly hit by violence, but still relies on tourism to help fund its conservation efforts. It was closed to visitors in March after experts said gorillas might be vulnerable to catching Covid-19. This has had a huge impact on conservation efforts. 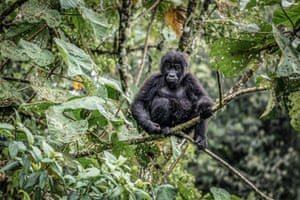 Deforestation is one of Virunga’s biggest threats. Virunga plays an important role in offsetting carbon dioxide emissions. The park and plantations in the province are second only to the Amazon in terms of total forest area, according to the WWF. For cooking fuel, 97% of people living near the park rely on charcoal made by chopping down the park’s trees. The practice is illegal, but Congo’s charcoal industry is worth an estimated $35m (£26.3m) and helps fund deadly insurgents who hide in Virunga’s forests, according to the Enough Project. 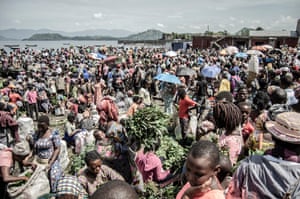 Insecurity is by far DRC’s biggest impediment to progress. There are more than 140 armed groups active in eastern DRC’s North and South Kivu provinces. In central and eastern DRC, various armed groups, and in some cases government security forces, attacked civilians, killing and wounding many, according to Human Rights Watch. Much of the violence appeared linked to the country’s broader political crisis. 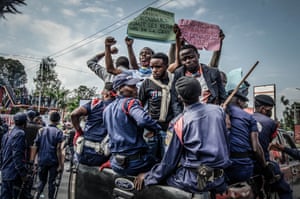 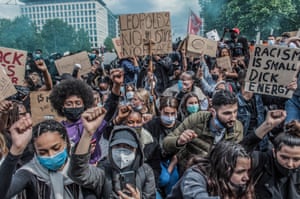 The 60th anniversary of DRC’s independence in June 2020 coincided with the coronavirus pandemic – and with the sweeping denunciation of both the colonial past and the racist present everywhere in the world. Black Lives Matter, an activist movement protesting against police violence, amplified and demanded the removal of statues, signs and symbols of slavery still present in day-to-day reality and in national thinking descended from the American civil war. Above all, the protests sparked a vast international movement, forcing the confrontation of racial exploitation and injustice. Belgium and DRC mirror this colonial paradigm. In Brussels, regrets about the past were expressed for the first time and statues of King Leopold II were brought down, he being an executioner even in absentia of millions of Congolese people. In Kinshasa, where the relics of colonialism were replaced under Mobutu Sese Seko, who ruled for 32 years until 1997, by “authentic” monuments, independence was celebrated “in spirit”. But nothing is forgotten. 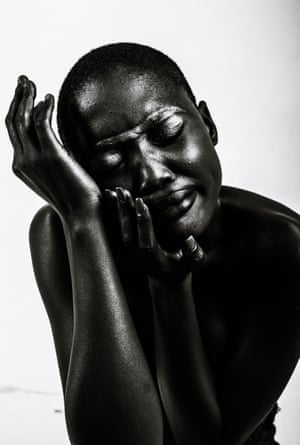 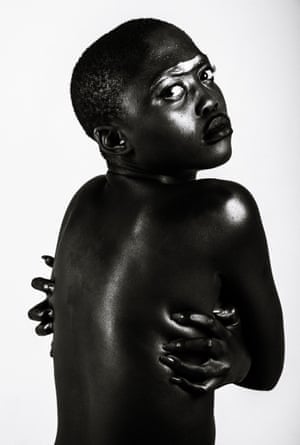 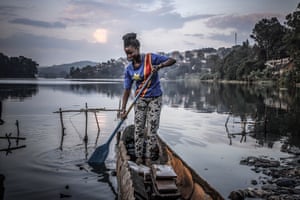 Independence anniversary celebrations in DRC traditionally involve visiting foreign dignitaries and an extravagant military parade along Kinshasa’s main downtown thoroughfare, the Boulevard du 30 June. Because of Covid-19, the government scrapped public celebrations this year and announced the anniversary would instead take place “in meditation” with the anniversary budget redirected to containing the pandemic.

The Congo in Conversation monograph; with the work of 15 photographers is co-published by Reliefs Editions and Fondation Carmignac

When you ask Ronald Ssenyonga, a 21-year-old Ugandan, to tell you about his arrest, he asks: “Which one?” Like many...

Evaluation: why ‘ultimate’ offensive could not finish Ethiopian battle | Ethiopia