Children now play football on the field where the lives of the people of El Salado changed completely.

In February 2000, about 450 paramilitary fighters stormed this small Colombian town. They forced people from their homes into the field, and began to play drums and drink alcohol stolen from local shops. They then went on to torture and kill. Yirley Velasco was one of those gang-raped. She was 14 at the time.

The massacre at El Salado – which left at least 60 people dead and many more “disappeared” – was one of the most brutal events in Colombia’s decades of armed conflict.

Afterwards, Velasco, her family and other survivors fled to nearby cities and towns, where they often lived in deep poverty and faced stigma for having been forcibly displaced. Two decades on, only an estimated 1,200 of the 4,000 people in the community have returned.

Today there are no signs of the bloodshed on the football field and the children kick their ball over a faded peace sign painted on ground. “When I pass by here, all the feelings come rushing back to me. I saw a lot of people get killed. It’s not easy to forget that. And there is still pain. There is still sadness,” says Velasco.

Velasco and 12 other survivors created a network, Mujeres Sembrando Vida (Women Sowing Life), to support victims of sexual and domestic violence in the northern Colombian region of Montes de María, an area still plagued by conflict.

Sexual violence is a common tactic used by paramilitaries, guerrillas and state military forces to sow fear and assert power.

“Sexual violence against women and girls is a kind of discrimination that comes from long-existing structures,” says Linda Cabrera, director of Sisma Mujer, an organisation that defends victims of gender-based violence in Colombia. “What it has created is different kinds of traumas.”

In El Salado there is no official registry of the rapes committed by paramilitaries. Velasco said the topic was missing in conversations about reparations.

People commemorate the 10th anniversary of the massacre in El Salado, in northern Colombia, on 20 February 2010. Photograph: Ricardo Maldonado/EPA

“When they began to discuss El Salado, I heard them talk about thousands of things [the community needed] – a health centre, a road, a church – but when they finished I said to myself: ‘What about the women?’” Velasco says.

“Because I lived it. I’ve felt the pain, I know the helplessness that comes from being ignored.”

I heard them talking about thousands of things the community needed but I said to myself: ‘What about the women?’Yirley Velasco, Mujeres Sembrando Vida

At the beginning of the pandemic, domestic abuse cases surged with protracted lockdowns across the world. It was particularly rampant in Latin American countries, with previously high rates of domestic and sexual violence. Although quarantines are no longer in force, gender-based violence has continued at alarming levels.

Velasco and her team guide victims to report cases and ensure these are handled appropriately, and try to address the sense of impunity that goes hand-in-hand with such crimes in Colombia.

“We do what the state entities fail to do,” she says. 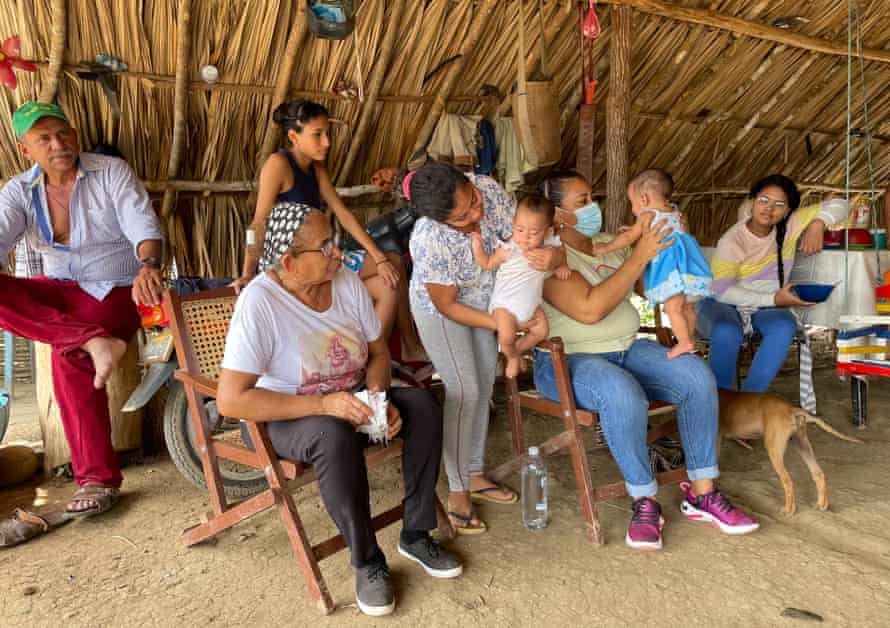 Members of Mujeres Sembrando Vida are part of multiple regional and national support groups. WhatsApp networks have been crucial to contacting victims in rural areas.

Velasco and her team also run in-person workshops in rural communities, teaching women about gender equality, and have set up a collective savings account to help women in emergencies.

“Ninety per cent of women depend on what their husbands give them. That’s what the violence is born from. With this savings account, if a woman has an emergency, there is money,” she says.

So far the team have helped about 280 women in El Salado and nearby communities. They have helped women leave abusive situations, get medical help and created projects to enable financial independence.

For survivors of sexual violence such as Diana Chamorro, 56, such support has been transformative. 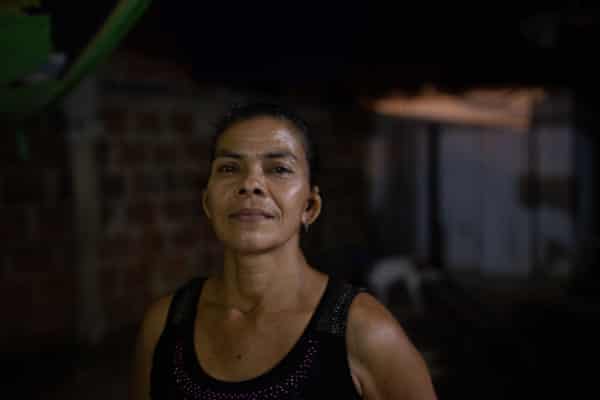 Diana Chamorro is a rape survivor who works with other women in El Carmen de Bolívar who have experienced sexual violence. Photograph: Megan Janetsky

In 1998, Chamorro was walking to her brother’s house not far from her home when a group of men attacked and raped her. The men were in military camouflage, but she never saw their faces. She says she told no one about the rape.

“I told absolutely no one,” she says. “What do I say if I don’t know who it was? That was part of it. The other part was the shame.”

It was only after meeting Velasco four years ago that Chamorro began to address the trauma she had felt for decades with a psychologist. Since then she has helped others.

I told absolutely no one. What do I say if I don’t know who it was? That was part of it. The other part was the shame.Diana Chamorro, Mujeres Sembrando Vida

“I felt protected, like I have someone to count on, that I’m not alone like a lot of women who have suffered more than I have,” says Chamorro. “I want to make sure that these women can join us.”

But the work of Mujeres Sembrando Vida has become increasingly difficult amid a resurgence of violence in Colombia. The Montes de María region is contested territory used by armed groups for drug trafficking. 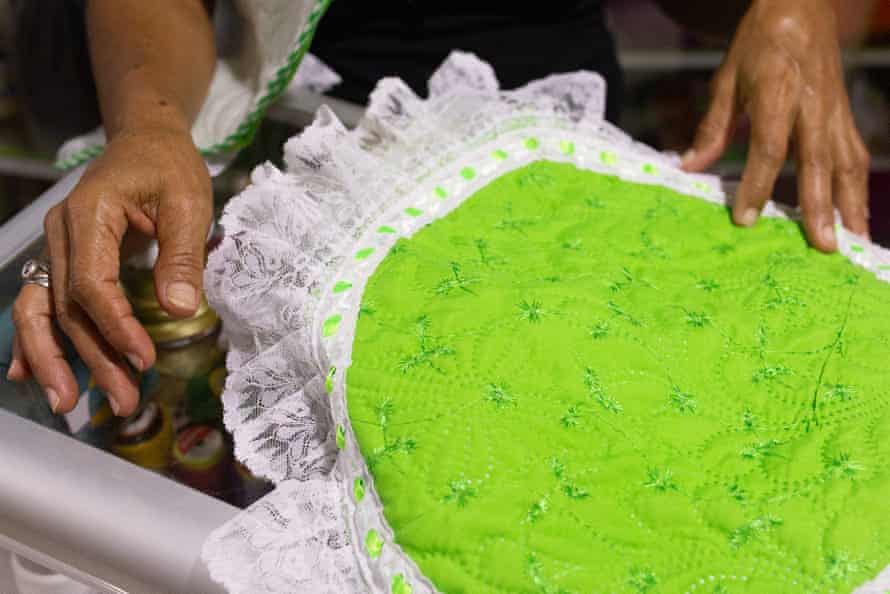 Diana Chamorro shows some of the fabric products her group have created in El Carmen de Bolívar, Colombia. Profits go to a ‘solidarity savings fund’ to help women in emergencies. Photograph: Megan Janetsky

People say they felt some relief after the government struck a peace deal with the Revolutionary Armed Forces of Colombia (Farc) in 2016, which offered respite to the fighting. But the peace process has fallen apart as different groups vie for territory, says Elizabeth Dickinson, a Colombia analyst for International Crisis Group.

The militia, Clan del Golfo, or Gulf Clan, and a handful of smaller gangs control the Montes de María.

“Instead of one dominant group, you have three dominant groups [in Montes de María],” Dickinson says. “Then everyone wants a piece of the pie, and the ones who suffer are the civilian population.”

Activists like Velasco are constantly under threat. In Colombia, at least 1,205 social leaders have been murdered since the peace accords were signed in 2016, according to Bogotá-based thinktank Indepaz.

Velasco says she has received about 500 death threats via message, 100 by phone and five written threats on her door. The threats often make reference to rape, she says. 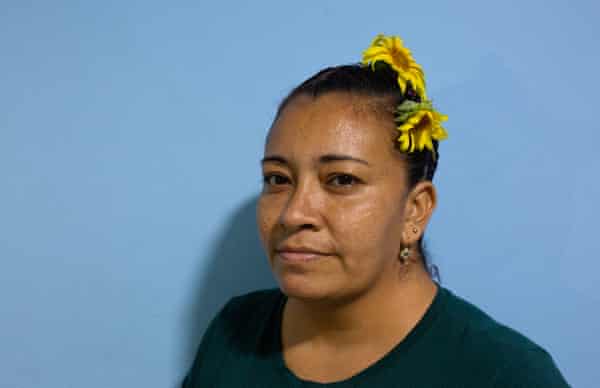 Sitting in her backyard under a security camera that the authorities have installed, she reads aloud a recent text. “Yirley Velasco, we are going to kill you, we have a lot of people all around you … We’re going to kill your mother and entire family if you stay here. We’ll give you two days for you to leave … we’re the Clan del Golfo.”

When she drives she is accompanied by two state-assigned bodyguards in a truck with bullet-proof windows.

Despite the risks, Velasco and Chamorro aim to expand their work. “We want to bring [new women] with us to help clear their minds so they can live in better conditions, tell their stories, and so their wounds can heal.”

In the UK, Rape Crisis offers support for rape and sexual abuse on 0808 802 9999 in England and Wales, 0808 801 0302 in Scotland, or 0800 0246 991 in Northern Ireland. Call the national domestic abuse helpline on 0808 2000 247, or visit Women’s Aid. Other international helplines for rape and sexual abuse can be found at ibiblio.org/rcip/internl.html. International helplines for domestic violence may be found via www.befrienders.org.