‘People are dying who did not have to die’: anger grows in Guatemala as Covid surges | Global development

The last time René García spoke with his family, he was having a coffee at home south of the Guatemalan capital last year after receiving an insulin shot that failed to improve his health.

The 59-year-old tested positive for Covid-19 the next day and died after a week on a ventilator. His younger brother Edgar was distraught with grief and relapsed into substance abuse, dying of an overdose-induced heart attack 12 days later.

“That is the tragedy coronavirus has left us,” said Alexander García, René’s son, in Guatemala City’s central plaza, where he has been participating in protests against corruption and pandemic mismanagement.

The pandemic is at its worst moment yet in Guatemala, and discontent is growing. New cases have been spiking, hospitals are saturated, and the vaccination rate is among the very lowest in all of the Americas.

A woman lights candles in Guatemala City in honor of the people who have died from coronavirus. Photograph: Sandra Sebastian/Reuters

Only 1.6% of the population is fully vaccinated and confirmed Covid-19 deaths surpassed 10,000 this week. While prosecutors investigate alleged corruption related to test and vaccine procurement, activists and opposition parties are calling for the president to resign.

“Throughout this whole disastrous situation, corruption has been the constant,” said doctor Zulma Calderón, health defender at the Human Rights Ombudsman’s Office, an autonomous state institution.

Guatemala’s public health system has always been weak and underfunded, said Calderón. The pandemic resulted in an unprecedented investment – but most of the new resources have not made it to the health system, she said.

“People are dying who did not have to die. Their deaths could have been avoided,” Calderón told the Guardian.

The rising new Covid-19 cases include both of Phillip Gómez’ siblings. Gómez, a 20-year-old parking lot attendant, and his 15-year-old sister got rapid tests at a mobile lab set up in a plaza. Their older brother is at home with a mild case of Covid-19, said Gómez.

Gómez tested negative, but his sister tested positive. She was given a pouch containing painkillers, an antihistamine, oral rehydration salts, vitamins and ivermectin – an anti-parasitic medication the World Health Organization has advised only be used to treat Covid-19 within clinical trials.

Testing capacity has increased in the capital, but the national Covid-19 response has been perpetuating longstanding inequalities. Indigenous people officially comprise roughly 40% of the population but have only received an estimated 17% of administered vaccine doses, according to Laboratorio de Datos, a non-governmental group that monitors and analyses Covid-19 data.

There is an online platform for vaccination registration, with text message appointment notifications. But more than a third of Guatemalans do not use mobile phones, according to the latest census.

“Registration [for vaccination] was designed with the urban in mind, not the rural,” said Rigoberto Juárez, a Maya Q’anjob’al traditional governance leader from the Huehuetenango department. “It is a structural problem.”

Most of the country also lacks the cold storage infrastucture required to administer Sputnik V vaccines contracted by the government in April. Prosecutors are investigating possible corruption related to the deal.

“No sane and conscious professional would have chosen Sputnik,” said Calderón, noting infrastructure for vaccines that only require 2 to 8C storage already exists. 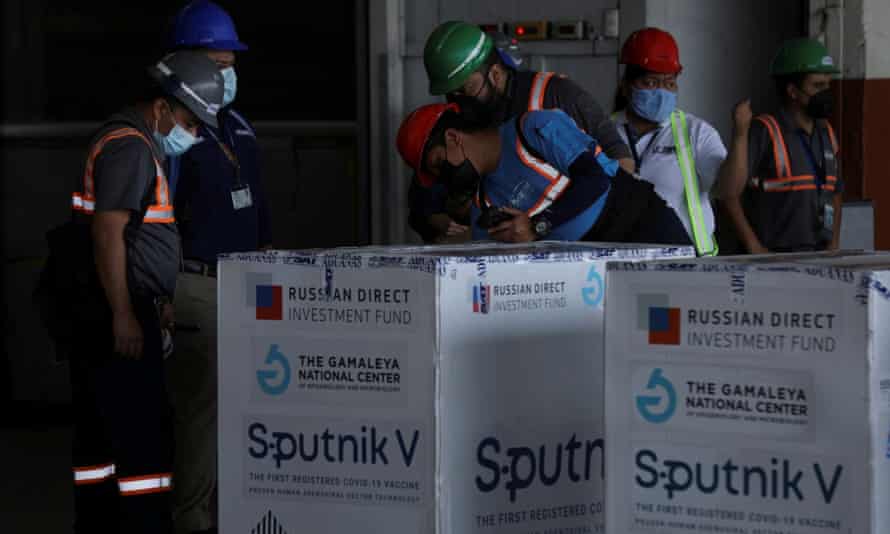 Guatemala has only received 860,000 of 16m contracted Sputnik doses, along with Covax facility shipments and donations. The 4.5m Moderna doses the United States donated to Guatemala this month represent more than two-thirds of all vaccines received to date.

The vaccination process has largely fallen on existing health personnel, already stretched thin, with assistance from military personnel and other groups. Without major changes, “the capacity to accelerate the pace of vaccination does not exist,” said Calderón.

“There is so much disorganisation,” said Hilda Ramírez, 84, outside a Guatemala City school used as a vaccination site.

She pulled out her mobile phone to show a string of messages and reminders confirming her appointment for a second shot, but even though she had turned up at 6am – five hours ahead of time – she was turned away with no vaccination. Officials had said that as affiliates of the social security institute she and several other seniors waiting on the sidewalk could only receive their second dose at an institute-managed site.

“There has been such bad management of all of this,” said Luis Avendaño, 74, as it began to rain. “This is why people are protesting, why people are asking for the resignation of the president.”

Alexander García, part of one of the grassroots groups organising protests, closes up shop a little early to attend the small outdoor rallies. After his father’s death, he had to drop out of university to take over his father’s market stall selling spices and grains full-time.

Accusing protesters of intentionally spreading the virus, Giammattei last week decreed a nationwide state of prevention, granting security forces the power to break up protests “without proper authorisation” if deemed necessary for security or health reasons.

Weekend rallies have continued regardless, and groups are now pushing for election law reforms that would permit revocation of a president’s mandate. Giammattei’s call for unity in a national broadcast Tuesday is unlikely to assuage discontent.

“They are just interested in stifling dissent,” said García. “It is going to add fuel to the fire.”