Thousands of people remain trapped in areas of central China as floods continue to batter the region after record-breaking rainfall. At least 33 people have been killed in recent days but the death toll is expected to rise as recovery crews access previously submerged roads and tunnels in the capital city.

Extreme rainstorms – which dumped a year’s worth of rain on and around the capital of Henan province, Zhengzhou, earlier this week – have since moved north, affecting outer cities and regional areas, trapping people without electricity or fresh water, including at hospitals.

“We couldn’t evacuate in time because my elderly disabled grandma couldn’t leave the house,” one 16-year-old school student surnamed Zhang, who said their house in Gongyi was completely flooded, told AFP. “I was pretty scared I’d drown.”

Local reports suggested the city of Xinxiang, home to 5.8 million people, had been hardest hit, with more than 260mm falling in a two hour window. State media reported the Wei river had burst its banks and flooded villages near Hebi. Local authorities pushed at least half a dozen trucks into the breach in an attempt to block it, without success.

Residents of Huangzhuang village in, Xinxiang, China are evacuated in the bucket of a digger. Photograph: Xinhua/REX/Shutterstock

Tens of thousands were being rescued or evacuated from villages and farmlands, some by makeshift bridges, other by inflatable boat or in the buckets of construction diggers.

On Friday 29 of the region’s 30 reservoirs have overflowed, local authorities said. At least two major reservoirs near Zhengzhou were also damaged or at risk of collapse earlier this week, but authorities have refuted suggestions the dams have played a role in subverting the regular water flow.

More than 10,000 military personnel have been deployed to Zhongzheng, where at least 12 people died when the subway system flooded. More than 100 cars were counted at a cross-city tunnel which had been submerged in up to 13 metres of water. Authorities said two bodies were recovered, however local media suggested there were still people missing. A woman named Ms Ma said she had lost contact with her 14-year-old son and his two friends who had been playing near the tunnel. 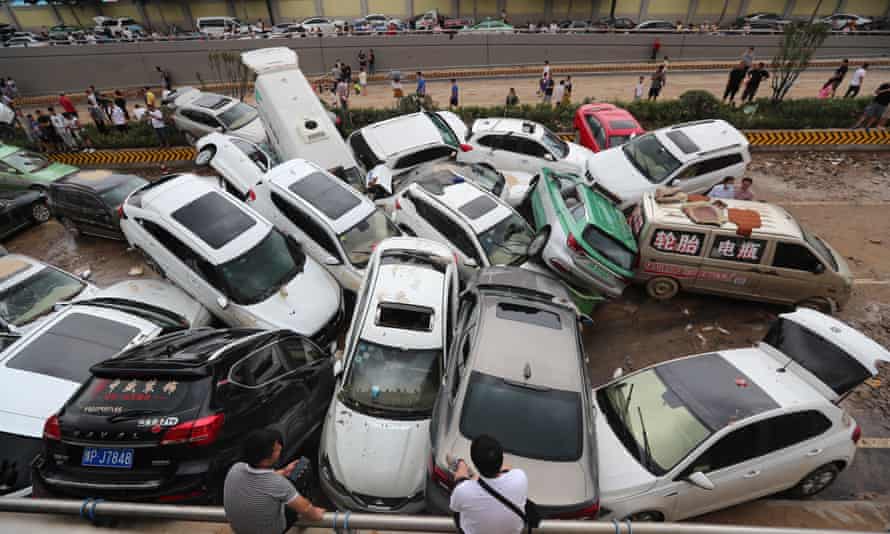 Damaged cars at the entrance of an expressway tunnel after extreme flooding in Zhengzhou, Henan province, China. Photograph: VCG/Getty Images

China’s leader, president Xi Jinping, said there had been a “significant loss of life and damage to property”. Xi has not yet visited the affected areas. On Friday morning state media reported Xi had instead made a surprise visit to Tibet, the first such visit to the politically sensitive area by a Chinese leader in more than three decades.

Chinese social media was also full of community support coordination, and tales of rescue. One Xinxiang resident described the ground floor of her house going underwater in a matter of hours, prompting her to send an SOS out on social media.

“Around 40 or 50-something calls flooded in, from the local and other provinces from Jiangsu and Jiangxi. They asked for our details and help to contact rescue teams. I saw some lights through my window around 1130pm, it was the rescue team. That was so unreal to hear their voice.”

Another widely shared story recounted the efforts of a young doctor, Yu Yifei, who was credited with saving more than a dozen lives while giving CPR to people caught in the flooded Zhengzhou subway.

As Henan’s disaster continues, eyes are already moving to China’s east coast and an approaching typhoon. Typhoon In-fa has brought heavy rain to northern Taiwan and Japan’s southern islands, and is predicted to make landfall near Shanghai over the weekend. In-fa was credited with partly driving Henan’s rainstorm even while hundreds of kilometres to the east of Taiwan.

During Saturday and Sunday’s high tides “coastal areas should guard against the combined impact of wind, rain and tides,” the National Meteorological Center said, warning the public to prepare for a major weather event.