‘I might not make it’: passengers tell of horror as Chinese subway floods | China

As flood water swirled around their chests, passengers on the Zhengzhou metro carriage clung to the handrails and struggled to breathe in the diminishing space between them and the roof. Some felt faint, and one woman was heard calling family members to give them banking and other information in the apparent fear she might not see them again.

Across Chinese digital and social media, horrifying stories have spread of people trapped in floods caused by what authorities said was a once-in-a-millennium rain event that hit the province of Henan, prompting the highest level of weather warning.

At least 25 people have been killed and more than 200,000 displaced by the disaster in the central Chinese city of Zhengzhou, which flooded the streets and the metro system and at least one hospital, and damaged dams. Another four were reported killed in the nearby city of Gongyi as 14 reservoirs overflowed. State media reported 20,000 rescuers had been deployed in more than 300 teams to assist 34,000 people, while another 1,150 joint police and armed forces were sent to dams and reservoirs for emergency repairs and diversions.

Amateur footage shared on state and social media laid bare the scale of the destruction, and hailed the rescue efforts by official teams and regular citizens across the city. Hundreds of cars were seen overturned and floating down submerged multi-lane roads, while elsewhere rescuers floated children out of a flooded kindergarten in plastic tubs, and teams of bystanders hauled people to safety by rope or human chains.

But some of the most alarming footage has come from the city’s subway system, where torrents of brown water filled stations and seeped into carriages on one of its seven lines. There were reports of censorship, with some posts, particularly those from inside the stations, taken down. Video from Shakoulu station showed at least five lifeless bodies on the platform.

A year’s worth of rain – 640mm (25.2in) – fell in three days. It broke daily and hourly records and government officials said it was a one-in-1,000-year event. The city’s weather bureau said more than 552mm of rain had fallen between 7pm on Monday and 7pm on Tuesday, including 202mm between 4pm and 5pm on Tuesday.

The network’s line 5 was inundated, trapping commuters on carriages and forcing the evacuation of at least 500 people, according to state media.

In a post on Weibo, which was later deleted, one woman described her horrifying experience on Tuesday afternoon, when the subway carriage she was travelling home in ground to a halt. She said the passengers were told to leave but were forced to return because of flood water too deep to walk through.

“I was scared when the water levelled with my chest. Many people started to suffer breathing difficulties. I heard a nearby passenger on her phone, giving her bank account details to her family, and thought I should do the same,” she said.

“Many things came to mind but I found it hard to express. I only told my mum that ‘I might not make it’ and ended the call. I was on the edge of falling apart … I fainted because of the lack of fresh air but was later brought back by the vibration of a phone call from mom, telling me the rescue was on the way.”

People walk along a flooded road in Zhengzhou, where at least 25 people were killed. Photograph: FeatureChina/EPA

She described hearing footsteps on top of the carriage, and rescuers breaking windows to let in air. Those having difficulty breathing, including herself, were sent out first, helped by other passengers.

Survivors said parents lifted their children above the torrent as dread gripped the carriages. Another woman said on Weibo she was making her way home at about 5pm when her train stopped between two stations close to the city centre.

“Water was leaking from the cracks in the door, more and more of it; all of us who could stood on the subway seats,” she said.

A 34-year-old man, surnamed He, recounted rushing to Shakoulu station, where his wife was trapped on line 5. His wife told him the air was running out and she could not wait long.

“I was crying all along on the one-hour walk to her rescue,” He told Southern Weekly. He found there were not enough rescuers to get everyone out and he joined in, carrying a man on his back, but the man later died.

“Most people were either vomiting, having headache, suffocated, or fainted because of lacking oxygen. The situation was dreadful.”

He said he soon heard a voice and found his wife, unharmed but exhausted.

Some commenters have begun questioning the actions of the subway operators, which said they were “well-prepared” and kept the lines running as the rains continued. 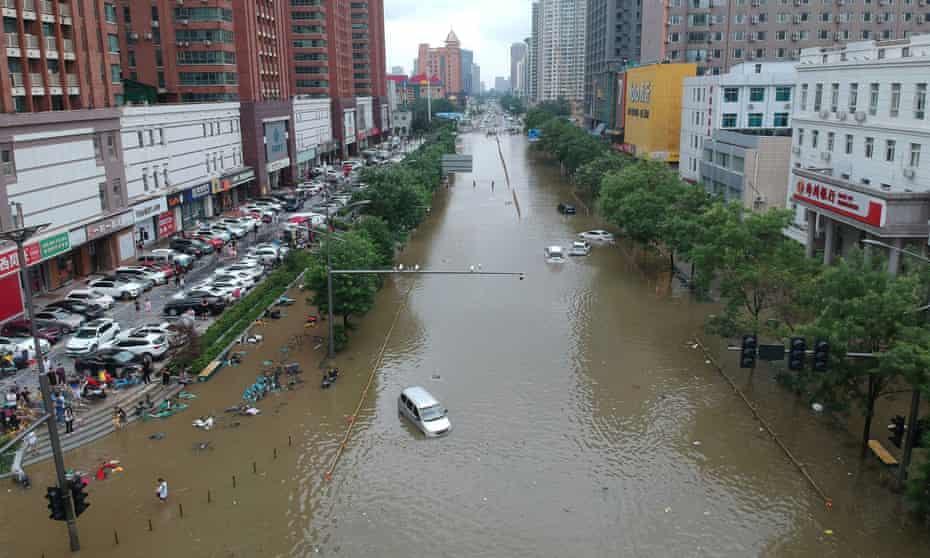 A year’s worth of rain fell in three days in Zhengzhou.
Photograph: China Daily/Reuters

Zheng, a safety worker at Zhengzhou metro, said he spent a full night and day pumping water out of the stations, but that they were overwhelmed by the Tuesday afternoon downpour. He said the metro system was the only way home for many people in such bad weather and they had tried to keep it running.

“This is the first time in my life I have witnessed water flooding into the metro station. I felt hopeless,” he said.

Rescue and recovery efforts are continuing, with stranded residents sleeping in cinemas and shelters, or waiting for transport to take them home. Forecasters said heavy rain was expected for the rest of the week.

The technology companies Tencent, ByteDance and Apple – the latter of which has factories in Zhengzhou – announced financial assistance donations on Wednesday.