Manu Chauhan used to dread running out of notebooks and pens. Though school in the village of Akrabad in Uttar Pradesh was free, stationery was not. He would have to go to his dad to ask for money, knowing his father earned 3,000 rupees (£30) a month selling insurance.

In September, Chauhan, now 18, will fly to the US to take up his place at Stanford University to study international relations, after graduating from an Indian academy that is educating future leaders in a state that has produced eight of India’s 14 prime ministers.

Shiv Nadar, the founder of IT giant HCL Technologies, based in Uttar Pradesh, set up VidyaGyan leadership academy to nurture talent among poor rural children in the state.

Chauhan passed its rigorous admission test seven years ago, joining a tiny number of rural children to get a passport to the kind of education that remains out of reach for most.

“Without the school, I would be working in my village today to help support my parents,” said Chauhan.

Nadar set up the academy in 2009 in Uttar Pradesh, after seeing how other states with elite schools were taking only wealthy urban students. There was little provision for poor gifted children in rural areas, where more than 60% of Indians live.

Nadar’s daughter, Roshni Nadar Malhotra, 39, is chair of the school and, as head of HCL, the first woman to lead a listed IT company in India. She says the aim is to develop men and women who can change their communities and the country.

Academy scouts comb the 75 districts of India’s most populous state to identify pupils – the family’s income must be less than 100,000 rupees (£1,000) a year. It is an extremely competitive process – from the 250,000 applications every year, only 200 get through.

“Asking a farmer in Uttar Pradesh to send his children, particularly daughters, to a residential school far from home is forbidding,” says Malhotra.

“What separated the children who got in from the others was the parents’ mindset. Thanks to the first batch of parents being willing, other families later were more open to the idea.” 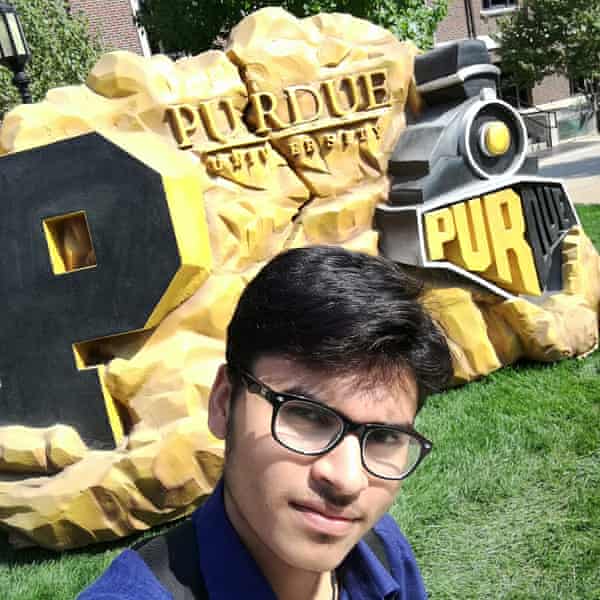 Former VidyaGyan pupil Amrish Nayak went on to Purdue University in Indiana, US

About 40% of the school’s students are girls.

The first couple of years at the academy can be tough on the children. Their social and communication skills are often poor, Malhotra says. Some come from difficult backgrounds, others have health issues.

“We have to bring them up to speed quickly but without overstressing them,” says Malhotra.

Students have won coveted places at Indian and US universities.

Amrish Nayak, 21, has just graduated from university in the US and now works as a business analyst. His father used to grow pulses and wheat in Sidhauli. Growing up, he remembers that money was scarce.

“Everything I have today and will ever have is because of this school and this once-in-a-lifetime chance I was given. I had never dreamed that I would ever leave my village,” he said on the phone from North Carolina.

The importance of giving something back is instilled in students at the school. They are encouraged to think about solutions to problems such as period poverty, or the harmful impact of the smoke women inhale from wood cooking fires. Students run education camps in their villages during school holidays and some go on to make this kind of work a permanent feature of their lives. “I have so many messages from children saying they have been inspired by me. These seven years changed my life so I definitely want to be able to help other children in some way as I feel a sense of responsibility,” says Chauhan.

Malhotra says that this can only be voluntary, and to expect students to go back and “uplift” their communities is unfair.

“Our students must have freedom … We only urge them to do one thing – don’t forget where you came from and be proud of it,” she says.