The lion in the London black cab: the remarkable story of Singh, and the boy who loved him | Animals

“He was,” London Zoo said, “one of the zoo’s politest pets.”

Singh the Lion arrived in a black cab and padded in through the front door, on a lead.

Thoroughly house-trained, he would wipe his face with a flannel when he finished eating, and purr when tickled.

How a rare Asiatic lion came to be standing at the Regent’s Park gates of the zoo, under the calm control of a 10-year-old boy, is a story from the age of empire, of Indian nationalists and Italian fascists, of steamships and stately homes, and of a little boy’s wish come true.

Francis Rushbrook-Williams, now 97, still remembers the summer, as a boy, when his lion came to stay.

“I used to play with him in the house and in the greenhouse. I would go along on all fours and he would go ‘buh, buh buh, boop’, and I would do the same.

Singh the lion cub, two months old, on the roof of the Hotel Excelsior, Naples, on 21 April 1935, days before he was introduced to Mussolini in Rome.

“He was gentle with his paws. We used to play with each other and we would pat each other, he was just like a pussycat.”

That glorious, remarkable summer, has, in the more than eight decades since, become family lore: chronicled now by his Sydney-based granddaughter, Victoria Mackinlay, in a children’s book, The Lion Who Came to Stay.

As a child, Francis was lonely at boarding school. His separation was an unremarkable state of affairs for the age, but he found the long absences from his parents and home especially acute, exacerbated by his distance from both.

His father was Prof Laurence Frederic Rushbrook-Williams, a commander of the British Empire, and fellow of All Souls College at Oxford University.

Francis wrote to him weekly from school, addressing his letters to British India, the land where he’d been born, and where his father served as eastern services director of the BBC (his father would later employ a struggling novelist by the name of Eric Blair, better known by his nom-de-plume, George Orwell).

Prof Rushbrook-Williams was a noted Indophile and expert on the subcontinent. When an Indian lawyer called Mohandas K Gandhi came to England, he would often stay at the Williams’ family home in Surrey. As a child, Francis remembers the future father of the nation of India for his meek handshake.

Rushbrook-Williams was also the personal assistant to the Maharajah Jam Sahib of Nawanagar. The Maharajah’s father had been Ranjitsinhji, almost universally acknowledged as the finest cricketer of his era, and who had batted for England alongside WG Grace.

‘We were often covered with bruises’

In the summer of 1935, Rushbrook-Williams made plans to visit England, and he wrote to his young son asking him if he wanted a present brought from the subcontinent. 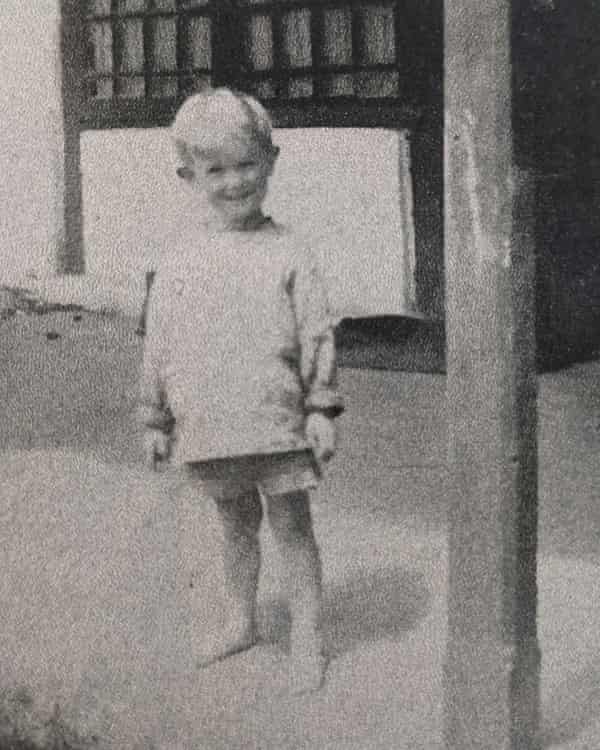 Francis, 4, in Simla, India, where he was born and lived with his parents.

“Something alive,” the boy wrote back. The request reached the ears of the Maharajah, who initially offered an elephant.

“The Maharajah said ‘oh, why don’t you take my elephant, it can play the mouth organ. He would be perfect’,” Mackinlay says, though she believes her great-grandmother Freda briefly entertained the idea.

“I think she did consider it, but thought, ‘well, you know, what would I do with an elephant in London? What would I feed on? Where would I get sugar cane?’.”

The Maharajah then told the Rushbrook-Williamses his lioness had just given birth to a litter of cubs.

“‘Why don’t you come and choose a cub and take a lion home for Francis?’ So that’s what she did. She wrote in her diary that she went and visited the litter and chose the one with the longest legs,” Mackinlay says.

“It was really important to them [Freda and Laurence] that the lion got home to the children. I think it was a way of them showing their affection, fulfilling this dream of bringing ‘something alive’ home, perhaps because they’d been apart so long.”

Given the name Singh – Sanskrit for “lion” – the two-week-old cub was promptly readied for passage to England. A carpenter built Singh a custom travelling crate, with night and day compartments, and the family sailed on board a cruise liner, the Victoria, along with the Maharajah, from Bombay on 11 April 1935.

Every day the lion, still just a handful of weeks old, was brought up on deck for exercise. “Pretty much a kitten”, he still terrified the dogs also on board.

1935 was a pivotal moment in world history. Across the Indian subcontinent, nationalist sentiment built. The Government of India Act passed by the British parliament would become, ultimately, a significant step towards independence, and the birth of the world’s largest ever democracy.

Across Europe, meanwhile, democracy was faltering: the rising tide of fascism was unmistakable.

The Victoria’s first port of call was at the Port of Aden. The ship had radioed ahead that more baby formula was needed on board – the lion wouldn’t eat anything else. Nor would he take the bottle he’d been given: “abolished it with one sweep of his paw”, the professor reported. He would only drink from Freda’s hands.

“I will never forget the feeling of his rough tongue lapping from my hands,” she would write later in her diary. 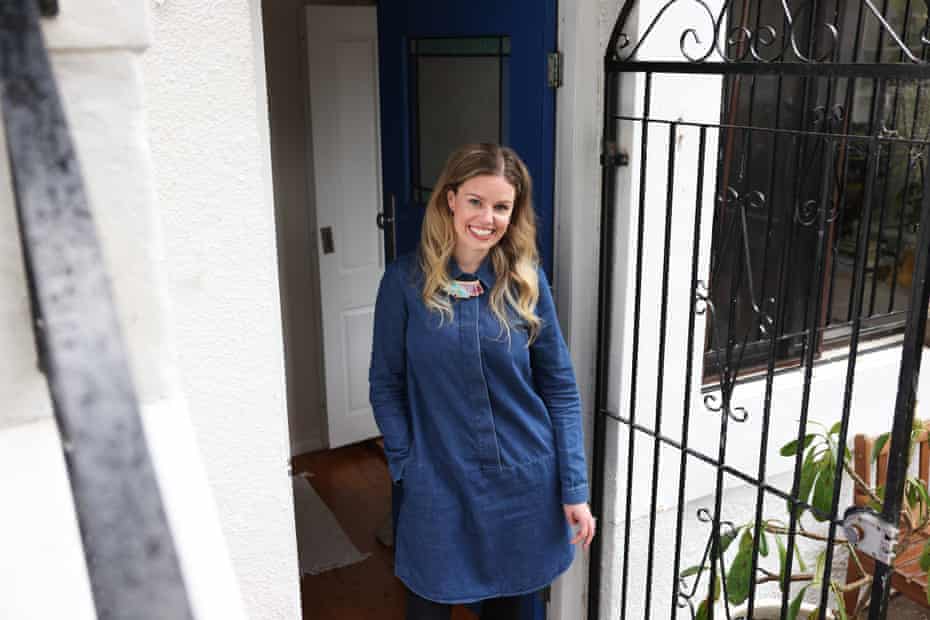 Victoria MacKinlay at her Bondi apartment in Sydney, NSW, and her book, The Lion Who Came To Stay, right. Photograph: Carly Earl/The Guardian

The ship transited the Suez, the travelling party driving to Cairo for sightseeing, before re-boarding at Port Said for Naples. 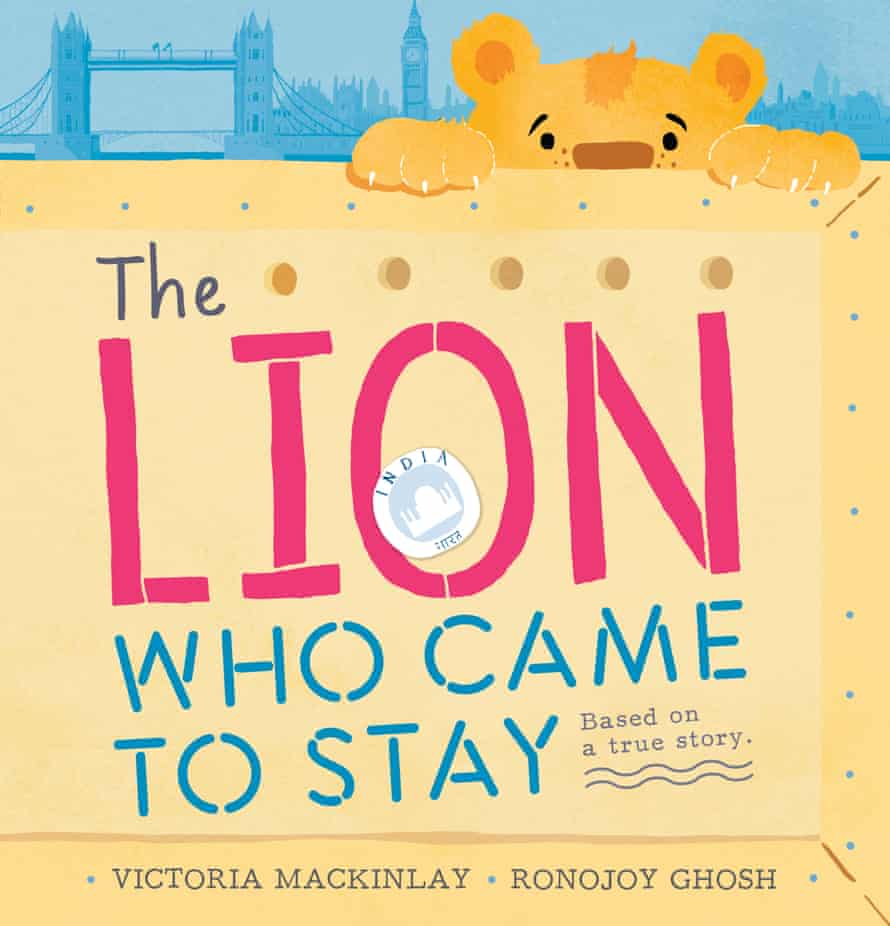 From Naples, the travelling party, including the Maharajah, his various panjandrums and staff, drove to Rome, where they were invited to tea with the prime minister, Benito Mussolini, as well as members of the exiled Greek royal family.

Word of this curious caravan – including a tame lion – preceded the travelling party as they made their way across Europe by train. They were stopped for calls at stately homes, granted audiences with local luminaries. The lion generally stayed in the bathroom of hotel suites.

An American woman in an adjoining room of one hotel refused to leave it while the lion was still there. In Cannes, Freda would wake early to walk the lion before too many people were on the streets.

It was early summer when Singh arrived in England. 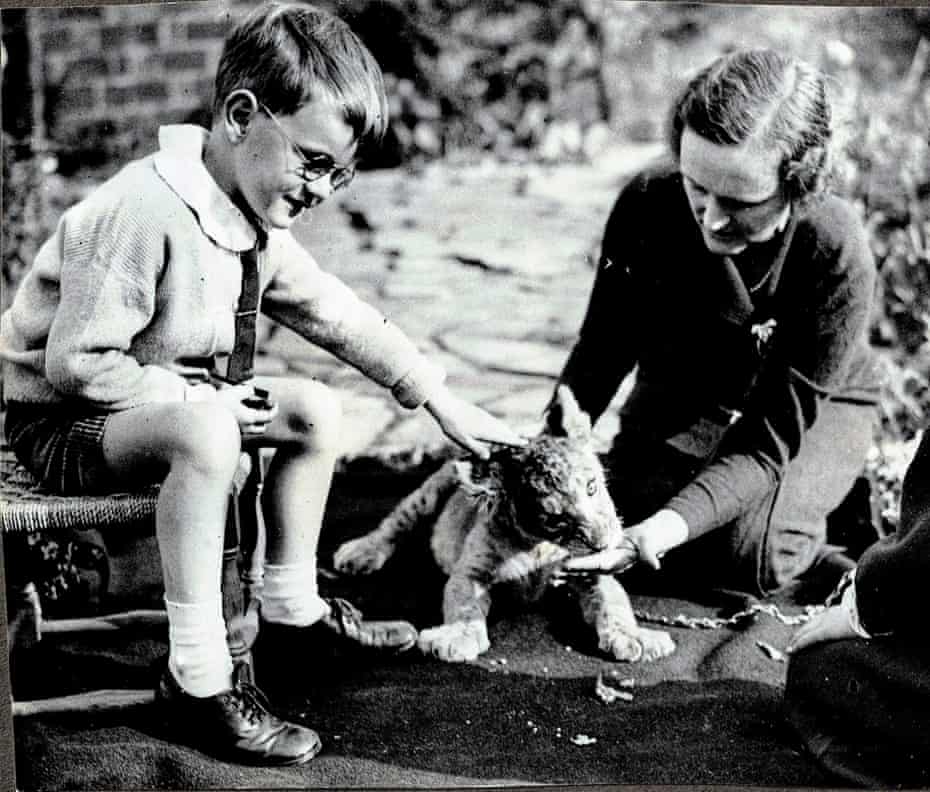 Rushbrook-Williams had engineered a shortcut around the quarantine obligations required in Britain at the time. The family’s ancestral home in Surrey had a conservatory and a high-walled brick fence.

The lion would live there, sleeping in the glassed building and able to roam the rose garden at will.

Now, from a distance of eight decades, Francis is still moved by the memories of his glorious summer with Singh, his “something alive” brought home from the land of his birth.

Boy and beast had a month together, playing indoors and with the run of the grounds of the garden.

Singh was “just like a pussycat”, Francis remembers, joyously energetic and playful.

The cub had learned, from Freda, to wipe his face with a flannel, using his paws, after eating.

“After every meal, he carefully wiped his milky mouth on a cloth which we left beside his feeding bowl,” Rushbrook-Williams wrote. 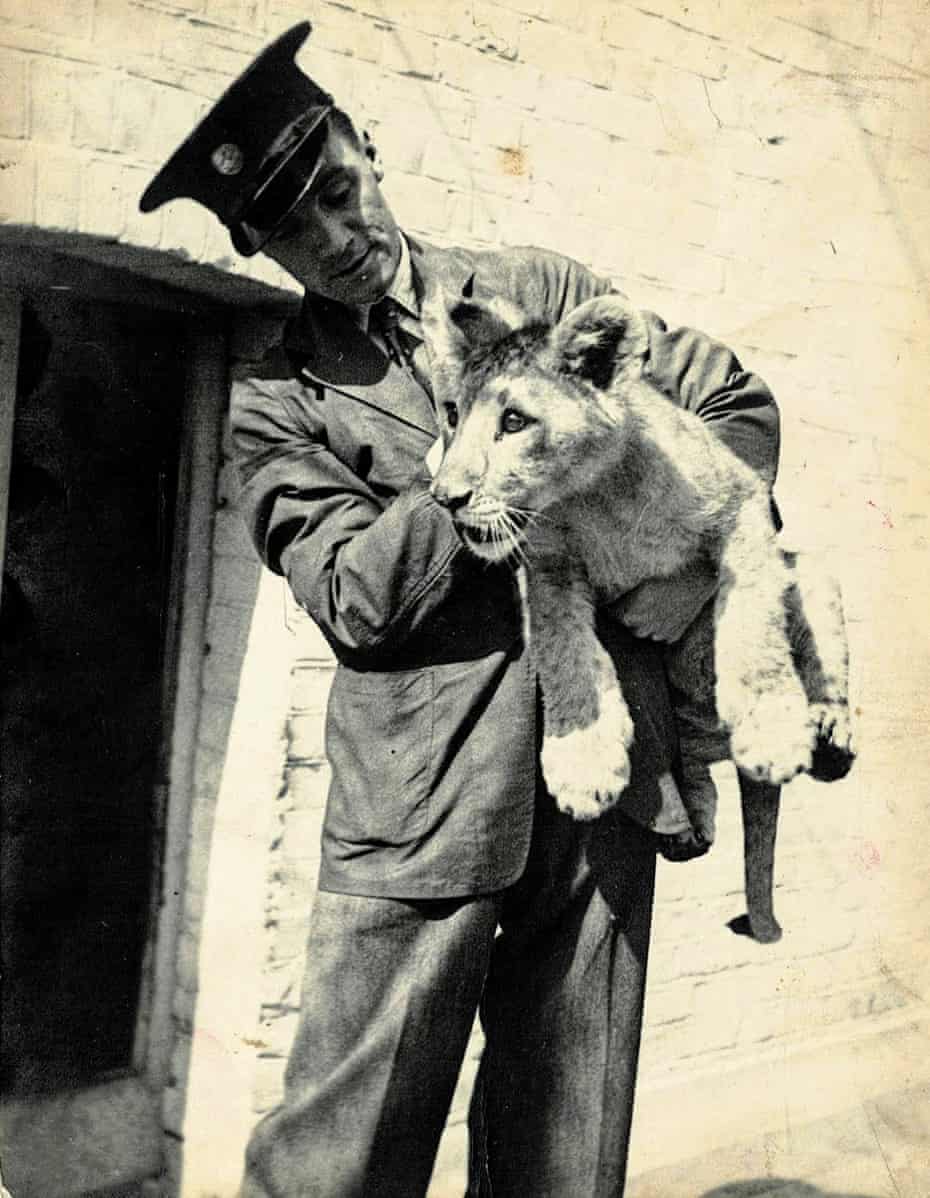 Singh with one of the zookeepers at London Zoo in 1935.

Mackinlay says Singh grew steadily stronger. “He grew big paws but he never hurt anyone. They played with him, dragging a towel along the ground that he loved to chase and pounce on. I think they played with him so much because they were worried that he would lose his lovely nature.”

Together, Francis and Singh practised roaring.

“My grandfather talked about Singh meowing a lot, he seemed to be practising his roar and Francis would encourage him to keep trying, to learn to roar properly.”

Even as he grew, Singh remained tame, and deeply affectionate towards his family.

But cubs become lions, and the milk-drinking kitten grew stronger each day. Singh had begun to eat – and relish – meat.

“The zoo sent a man down every week to see how he was getting on,” Prof Rushbrook-Williams would later write. “They soon insisted he must be put on a meat diet; it was interesting to see how he tore and shook pieces of meat before swallowing them.”

By the end of the summer holidays, the professor said, “we felt… he would be too strong for us to manage”. 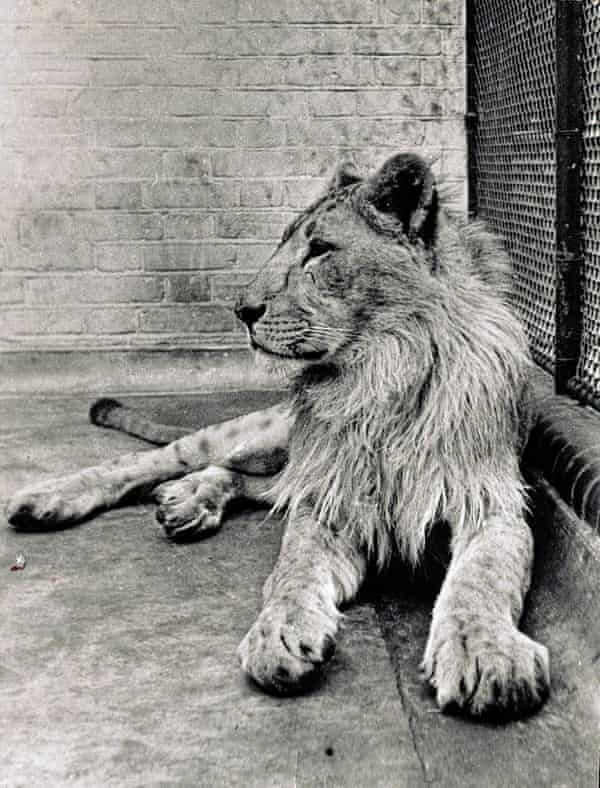 A grown-up Singh at London Zoo, having been donated by Francis and his family in June 1935. Photograph: Victoria Mackinlay

“To us he never showed teeth or claws; but the love-pats which he gave us in play were so heavy that we were often covered with bruises.”

A conservatory was no place for a grown lion.

On the morning of 4 June, the family called a black cab – history is silent on the driver’s reaction to the feline passenger – and drove to London Zoo.

Singh walked in the main gates on a lead, borne by Francis.

An extant letter from the secretary of the zoo records the transaction:

“I am directed to return you the thanks of the Zoological Society for your kind gift of the undermentioned animal which has arrived safely and makes a welcome addition to our collection: 1 Indian Lion Cub, ‘Singh’, Felis Leo.”

Newspapers the next day bore the headlines: “Lion Walks in By Front Door”, “The Lion Arrives – by Taxi, Singh: One of the Zoo’s Politest Pets”.

Freda told one paper’s “zoo correspondent” that “the children loved him. My eldest boy, who is at boarding school, even came home to see Singh, who had become very tame. They were so sorry that he has had to go the zoo.”

The parting was an acute sorrow for Francis.

His lion would go to the zoo to live, his parents would sail for the subcontinent and he would return to the loneliness of boarding school.

But Francis would regularly visit his former pet.

“He’d go to visit,” Mackinlay says, “and Singh obviously remembered him and would bound over to see Francis and would roll over and lie against the bars of his cage. The zookeepers would let Francis come right to the front and he would stroke him and tickle him just like he had done when he was at home”. 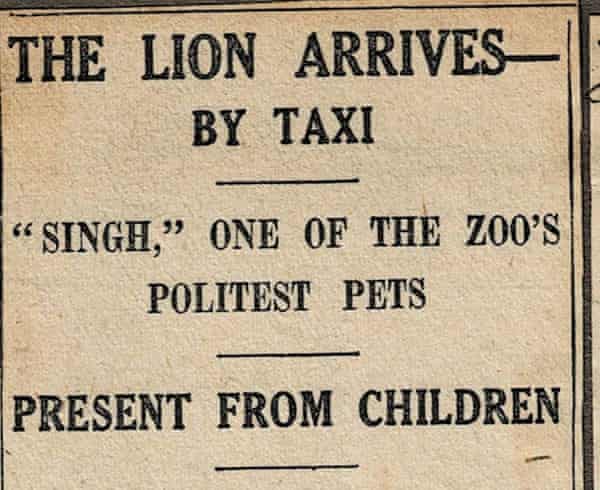 How Singh’s arrival was reported. Photograph: Supplied by Victoria Mackinlay

The children’s visits would attract a crowd, and their familiarity with the lion occasional confusion.

Francis remembers one visit: “We went to his cage and we tapped on the bars, and we said to him ‘Singh, Singh, Singh’… and an old man standing next to us said ‘don’t be silly, lions can’t sing’.”

Singh would father four cubs to a lioness, Bessie. But he died, of causes unknown, in 1940. By that time, many animals had been moved from Regent’s Park to Whipsnade to avoid the worst of the Blitz.

The world was at war. Francis Rushbrook-Williams soon would be too, dissembling about his age so he could sign up at 17.

While Singh’s summer in the conservatory was short, his story has lived on as an oft-repeated tale within the Rushbrook-Williams family, and now, carried by his grand-daughter, out into the wider world.

“For me, it’s wonderful that this story gets to live on, that my grandfather’s memory can live on,” Mackinlay says from her Sydney home.

“It’s simply a lovely story, this almost unbelievable story about a bond between a boy and a lion, but it’s a story, really, about fulfilment, about a wish coming true.”