The US has said it is up to Afghan security forces to defend the country after Taliban militants captured a sixth provincial capital, along with border towns and trade routes.

Fighting in Afghanistan’s long-running conflict has escalated dramatically since May, when the US-led military coalition began the final stage of a withdrawal set to be completed before the end of the month.

“It’s their country to defend now. It’s their struggle,” Pentagon spokesperson John Kirby said at a news conference on Monday.

“These are their military forces, these are their provincial capitals, their people to defend, and it’s really going to come down to the leadership that they’re willing to exude here at this particular moment,” Kirby said.

He acknowledged the fight on the ground was “clearly not going in the right direction”.

While refusing to provide additional military support, the US said it would continue to push for a diplomatic resolution to the escalating conflict.

The US negotiator on Afghanistan, Zalmay Khalilzad, “will press the Taliban to stop their military offensive” at talks in Doha this week, the state department said.

Khalilzad would help formulate an international response to the rapidly deteriorating situation, it said, as it described the casualties and alleged human rights atrocities as of “grave concern”.

“A negotiated peace is the only path to ending the war.”

The Taliban have now overrun six provincial capitals in days. On Sunday the group claimed a huge symbolic victory when its fighters seized Kunduz, a strategic city close to the border with Tajikistan and an important political and military hub. It has also claimed Sheberghan, the capital of the northern Jawzjan province, and neighbouring Taloqan.

On Monday armed fighters swept into the city of Aibak without meeting any resistance, while forces were advancing toward Pul-e Khomri, another provincial capital in the north.

“The city of Aibak, unfortunately, fell to the Taliban on Monday afternoon,” a local official confirmed to the Guardian by phone. “Taliban fighters, armed with heavy weapons, besieged the city for a week. It fell without any clashes.”

The official added: “Local security forces and officials retreated from one side and around 30 minutes later the Taliban entered the city from another side. Kabul did not send help. Taliban now control the headquarters of the police, governor and intelligence. People are worried. Shops are closed. Many government employees and local people have fled in recent days.”

The Taliban posted video of their triumphant fighters standing in front of Aibak’s main administrative building, and on a road on the outskirts. The city is a key route for the supply of goods to northern Afghanistan. Its capture leaves pro-government forces in the region increasingly cut off.

Another senior local official blamed a former senator and local strongman for the fall of the city after he switched sides on Sunday and joined the Taliban with 300 of his men. Switching sides has been a tactic for decades in war-torn Afghanistan.

The Taliban were also pressing on the biggest city in the region, Mazar-i-Sharif. Its fall would deal a devastating and possibly terminal blow to the government in Kabul. Officials and residents contacted by phone said the Taliban was exaggerating. They confirmed clashes in surrounding districts.

“The enemy is trying to distort public opinion and create anxiety for the civilian population by their propaganda,” said a statement from the police force in Balkh province, where Mazar-i-Sharif is the capital. Atta Mohammad Noor, a northern militia commander, vowed to fight to the end, saying there would be “resistance until the last drop of my blood”.

“I prefer dying in dignity than dying in despair,” he tweeted. 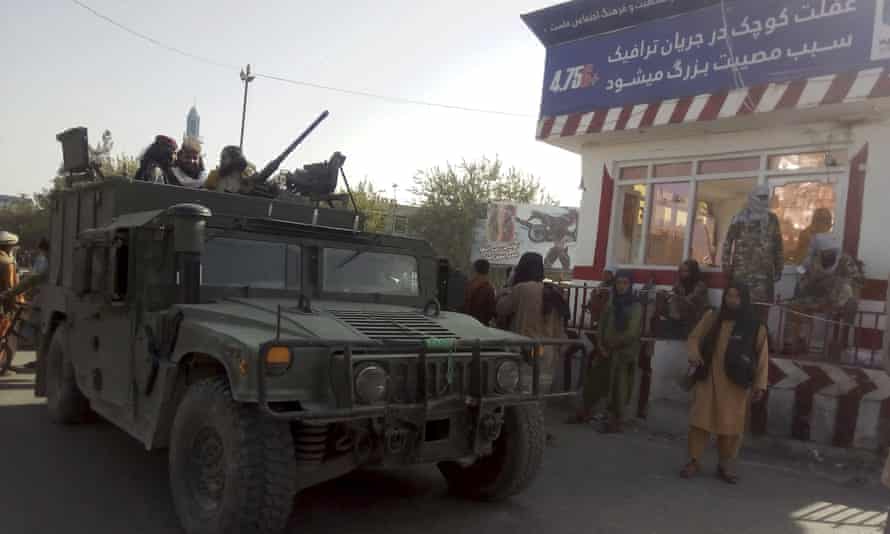 On Monday Unicef said it was “shocked” by the recent escalation in violence – 27 children have been killed and 136 wounded in three days.

“These are not numbers. Each one of these deaths and each case of physical suffering is a personal tragedy,” said Hervé Ludovic De Lys, Unicef’s Afghanistan representative.

Elsewhere in the country, the Taliban started looking for government employees in newly captured territories.

“I refused to go to my office on Thursday and fled to a nearby village, to a relative’s home,” said Shahla, a woman who had been a local prosecutor for four years in the city of Zaranj. The Taliban took over Zaranj, in the south-west province of Nimroz, on Friday – the first provincial capital to be captured by the insurgents since the Biden administration announced it was pulling out US troops.

“Then I came to Herat with only my clothes on Saturday, leaving everything behind. It was a horrible journey. Taliban had checkpoints all over the road and checked our vehicle several times along the highway. They were asking questions only from men. I was wearing a burqa. It was hot like hell, but it was my only protection.”

The Taliban have started giving so-called “immunity cards” to soldiers and civil servants in the same city, asking anybody with connections to the government to come and register, local people told the Guardian. Employees are told to go to the local governor’s office and after some questions receive their cards.

“Taliban warned the people that if they cooperate with the government in the future, they will be killed right away, without any trial,” a resident said by phone. “Many did, but I cannot. They are not trustworthy. I guess they are looking for high-ranking officials.”

Shahla said she was sceptical about the plan. “I was scared to tell them that as a woman I worked for the government. I could not trust them. I feared that they would stone me to death for what I did over the past four years. I already received several threats from them.”

With Reuters and Associated Press