And over to Kieran Pender for big sports news from last night:


‘The Olympics will return to Australia for a third time with Brisbane formally awarded hosting rights for the 2032 Games after a vote of International Olympic Committee member nations in Tokyo.

Wednesday’s decision was a foregone conclusion given Brisbane was the only bid city still in the running and it was firmly endorsed by the IOC.

Celebratory fireworks lit up Brisbane’s night sky as the Queensland premier, Annastacia Palaszczuk, and the Australian delegation – who had travelled to Tokyo to make their case in person – signed contracts and took photos in Japan.

Here is personally my least favourite tweet in reaction to this announcement:

After you recover from that, you can read the full report below:

Federal treasurer Josh Frydenberg has just told Sunrise that he expects Australia’s September quarter to be in the red, which is somewhat unsurprising given that more than half of the country’s population is in lockdown:


We were probably expecting that the September quarter is a negative – let’s wait and see what happens in the weeks ahead. To have your two biggest states, New South Wales and Victoria, in lockdown is a big blow.

Treasury estimates that having these three states with South Australia in lockdown, is costing around $300m a day. Again, that is going to play out in many ways, but that’s why our economic support is there.

If you look at the economic performance, with respect to this whole recession that we faced, we bounced back quickly. Faster, stronger than either the reserve bank or Treasury had been expecting, so I’m confident that if we can get on top of the virus we will see a strong bounce-back in the economy.

According to the ABC, Victoria can expect a slightly higher number than yesterday’s 22 new local Covid-19 cases.

That number was already the highest the state had recorded in 10 months but there is hope that the majority of these new infections will be from close contacts who were already in isolation.

Federal Labor frontbencher Kristina Keneally has raised the alarm that Scott Morrison will personally decide how to allocate $800m of manufacturing grants. 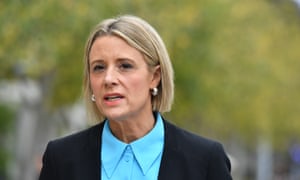 The speech follows weeks of controversy about the $660m commuter car park fund. The Australian National Audit Office found its 47 project sites were handpicked by the government on the advice of its MPs and candidates.

You can read the full report below:

Hello everyone and welcome to Thursday.

Five of the latest cases are linked to the Tenafeate Creek winery at Yattalunga, north of Adelaide, with the sixth, a child under five, linked to a Greek restaurant in the city, where a number of infected people dined at the weekend.

After one of the cases – a man in his 40s – attended the winery, he went to a school campus in the town of Gawler on Monday, raising concerns for other staff and students.

The state’s chief health officer, Nicola Spurrier, said both the winery and the restaurant were now considered super-spreader sites.

In NSW health officials are worried that Sydney’s cluster is on the move again, leaking into vulnerable communities in the city’s west.

The lion’s share (50) of yesterday’s 110 cases still came from the south-west, but health authorities said they are particularly concerned about the 29 newly infected people in the western Sydney local health district.

People should be particularly vigilant and don’t hesitate to come forward for testing at the slightest symptom.

Oh, and also Brisbane won the 2032 Olympics or something, but we will get to that later. Let’s jump into the day!

If there is something you reckon I’ve missed or think should be in the blog but isn’t, shoot me a message on Twitter @MatildaBoseley.