Cockatoos in Sydney learning from each other to bin-dive for food, study finds | Birds

Sulphur-crested cockatoos are learning from each other to open wheelie bins in order to scavenge for food and the behaviour is rapidly catching on across Sydney, according to new research.

With help from the public, Australian and German ecologists have documented cockatoos learning the bin-diving behaviour through social interactions, with reported sightings of the behaviour growing across Sydney in recent years.

The researchers called on Australians to report sightings of cockatoos opening bin lids. Before 2018, bin foraging was sighted in only three suburbs in greater Sydney and Wollongong: Barden Ridge, Helensburgh and Sutherland.

The ability to open bins had spread widely by the end of 2019, with sightings reported in 44 suburbs.

Dr Barbara Klump of the Max Planck Institute of Animal Behavior in Germany, who was one of the study’s lead authors, said the behaviour spread more quickly to neighbouring areas than to suburbs farther away, suggesting the cockatoos were learning by observing others, rather than figuring out how to open bins by themselves.

“It’s not popping up randomly in those 44 suburbs at the same time, but it’s following … the geographic layout of the suburbs,” Klump said.

A group of sulphur-crested cockatoos wait for one of them to pry open a bin before sharing in the spoils. Photograph: Barbara Klump/Max Planck Institute of Animal Behavior

The sulphur-crested cockatoo is a highly intelligent parrot species notorious in Australia for its loud screeching and sometimes destructive behaviour. It is one of few known non-human species capable of dancing in time to music, as in the case of the viral sensation Snowball, the dancing cockatoo.

Following the survey, the researchers marked and observed 486 cockatoos. In direct observations, they found only around 10% of the birds, most of whom were male, were capable of opening the bins. The rest of the cockatoos waited until bins were opened to share in the spoils.

The process of a cockatoo swinging open a wheelie bin lid is “quite tricky both from a motor action and a physical strength perspective”, Klump said. “It’s a very complex and multi-step sequence that they have to learn.” 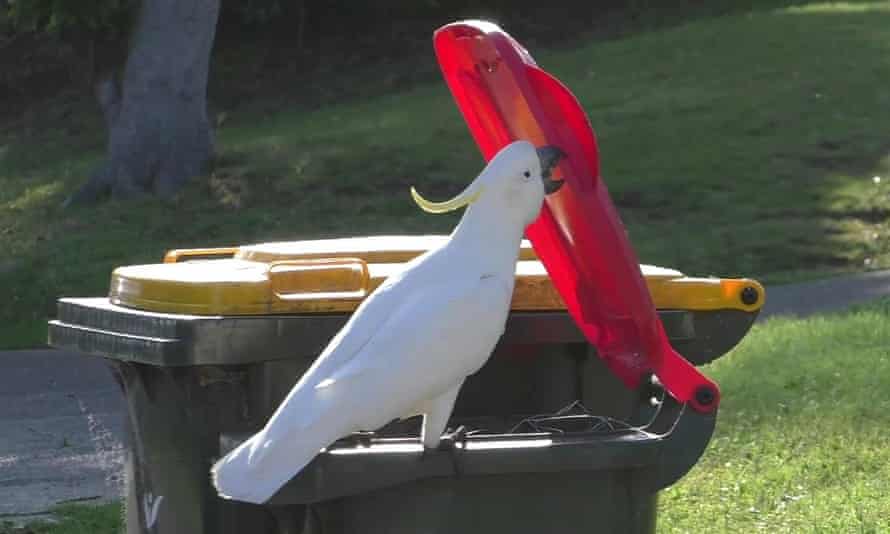 Klump hypothesises that more male cockatoos were able to successfully open the bins potentially because they are larger, or more dominant and “restricting access to the [food] resource”.

The research, published in the journal Science, also found differences in the cockatoos’ bin-opening technique between different suburbs, arising from “local subcultures”.

“We found that if we looked, for example, at all the birds in Stanwell Park – even though some of them have individual differences – and if we compared them to birds in Sutherland … the difference [in technique] is greater than within each of those sites.”

The cockatoos also seemed to differentiate between red-lidded general waste bins and yellow-lidded recycling bins based on their colour. When observed, 88.8% of the time the birds opened the general waste bins. 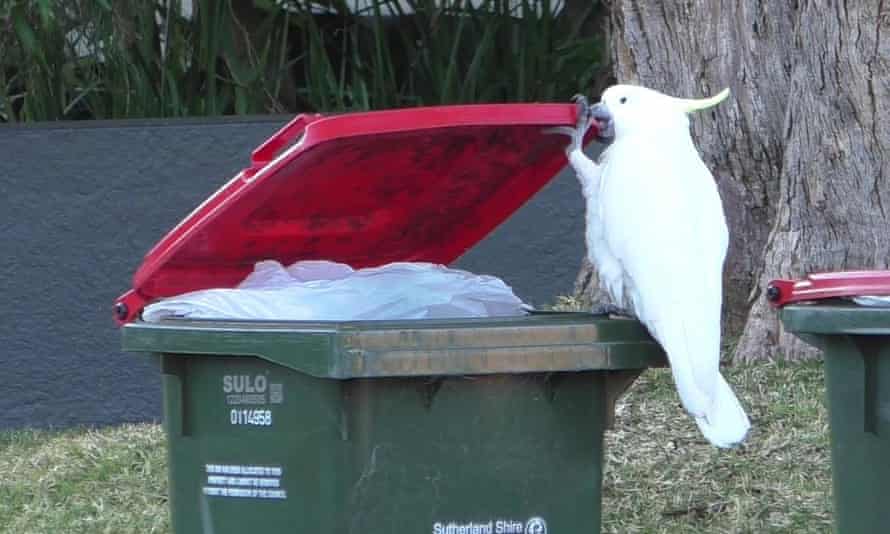 Opening a bin is a ‘tricky’ undertaking for the cockatoos, requiring the use of claws … 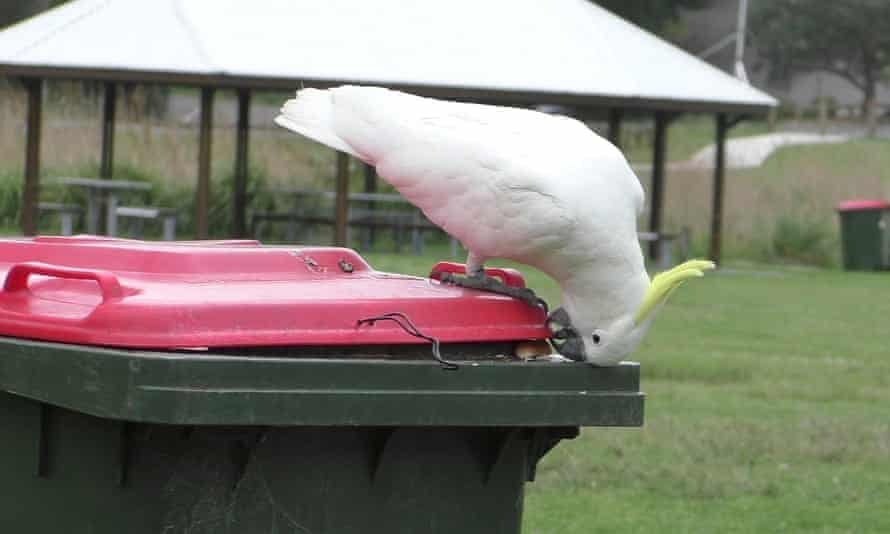 The idea for the study arose when one of the co-authors, Dr Richard Major of the Australian Museum, observed the behaviour on his way to work one day.

The researchers don’t know for certain how the behaviour began, but co-author Dr John Martin of the Taronga Conservation Society said it may have originated from cockatoos scavenging in bins that were overfull or blown open on windy days.

“Those sorts of opportunistic foraging opportunities could have actually been a catalyst for birds to start exploring bins,” Martin said.

The researchers also noted one cockatoo in Narraweena, in northern Sydney, seemed to have spontaneously taught itself the behaviour in late 2018. “That one could not be explained by social learning because it was too far away [from other documented cases],” Klump said. “From that suburb to the surrounding suburbs, it again was acquired by observation.

“The interesting question is now whether it’s continuing to spread.”

Martin said there were reports of the behaviour in Victoria that they were planning to investigate. “We’d love to be receiving more information to confirm when and if this behaviour is occurring in other areas across Australia.”

The researchers are running the survey again and are seeking online responses from Australians on whether they have spotted cockatoo bin openings. “Having an answer that’s a ‘No, it doesn’t occur here’ is as important for this survey for us,” Martin said.