Good morning. National cabinet meets today to discuss the worsening Covid outbreaks and progress on the vaccine rollout, a UN committee votes on the status of the Great Barrier Reef tonight and cockatoos in Sydney are learning to open wheelie bins. Here are the main stories for this Friday.

As Sydney approaches four weeks in lockdown, the number of Covid cases infectious in the community remains stubbornly high. On Thursday, 124 new local cases were announced in New South Wales. But experts and the state health authorities are divided on the best ways to reduce transmission and bring cases down close to zero before restrictions can be eased. It comes as figures show the NSW government has taken up just 145,000 of the almost 1 million doses of AstraZeneca vaccine allocated to it by the commonwealth, leaving vaccines to either stockpile or be directed overseas. Amid the latest outbreak, NSW opted only to accept Pfizer vaccines from the federal government, because of what it says is a lack of demand for AstraZeneca.

In UK, the rise in self-isolation alerts from the NHS app amid growing Covid-19 cases dubbed as “pingdemic” has caused disruptions in supermarket supplies and forced the BBC to stop making some of its local news programs until September at least because of staff shortages.

A committee of 21 countries will decide tonight whether to accept a Unesco recommendation to add the Great Barrier Reef to its “in danger” list, or to acquiesce in the Australian government’s fierce lobbying effort to keep the reef off the list. Whatever the committee decides, it won’t alter the fact the reef is at risk from climate change. Ecosystems dominated by corals are predicted to be one of the first to collapse from global heating, caused by the world’s inability or unwillingness to cut its use of fossil fuels.

The Queensland ambulance service has apologised for the treatment provided to an Indigenous man who died after being detained by police, acknowledging “our performance fell below our own high standards”. The man known as Noomba, 39, died in 2018 after being detained outside his Townsville home by police, with paramedics in attendance.

Australia is being urged to speed up a transition away from fossil fuel exports as Japan, its biggest market for LNG and thermal coal, pledged to cut gas-fired electricity generation nearly in half and reduce coal power by more than a third by 2030, much faster than previously planned.

Coles has announced it will no longer give away plastic toys such as its Stikeez and Little Shop as it looks to become more sustainable and reduce its contribution to plastic waste. Earlier, the retailer stopped selling single-use plastic tableware.

Sulphur-crested cockatoos in Sydney are learning from each other to open wheelie bins in order to scavenge for food, according to a new research (there’s also a video). Bin foraging by cockatoos has spread across 44 suburbs in only two years.

Newly released materials show the FBI failed to fully investigate sexual misconduct allegations against the US supreme court justice Brett Kavanaugh when he was nominated to the court in 2018, a group of US Democratic senators say.

Angela Merkel has conceded Germany’s record on reducing carbon emissions was “not sufficient” to meet the global warming targets of the Paris climate agreement, as the chancellor reflected on the achievements and missed opportunities of her 16-year leadership. Merkel was speaking at her last major press conference before she steps down as leader of the country.

Mexico has urged Israel to extradite a former top criminal investigator wanted in connection with the disappearance of 43 students in 2014. Tomás Zerón is accused of kidnapping, torturing suspects, manipulating evidence and embezzling around $50m of public funds. He has denied the allegations.

Italy has imposed more restrictions on unvaccinated people as it pushes for more citizens to get a vaccine against Covid-19 amid a resurgence in infections. From 5 August, entry to stadiums, museums, theatres, cinemas, exhibition centres, swimming pools and gyms will only be allowed upon presentation of a “green pass”. 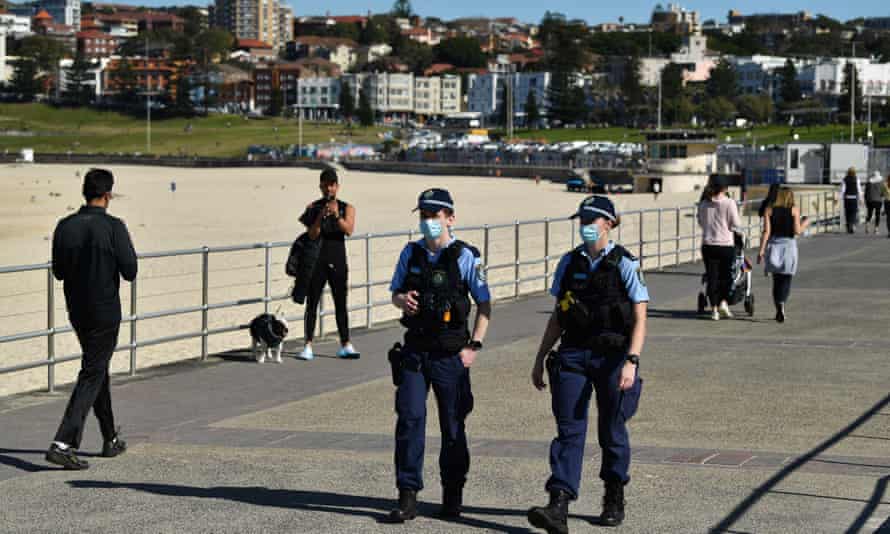 NSW police patrol the promenade at Bondi beach on 20 July during the Covid lockdown of greater Sydney. Photograph: Joel Carrett/EPA

Bondi’s been many things to many people over the years but currently it’s in danger of being the most hated place in Australia. It’s got that thing that no place wants: a namesake Covid cluster, the tail of which has ultimately sent 14 million Australians into lockdown. It’s not just the cluster – people are regularly filmed on the beach and promenade taking exercise, with the footage then being distributed widely as evidence of the residents’ arrogance. Brigid Delaney on how it has become a thing to bash Bondi.

Leo Skliros is happiest when he’s among his trees picking mangoes with a pole – especially in July. Skliros is one of the Northern Territory’s mango farmers who can get their trees to flower and produce mangoes early. How does he do it, when mangoes normally produce fruit in late September – in a good year? The answer is: every grower has their own ‘recipe’ plus lots of trial and error.

Superstore: the workplace sitcom the world needs right now. In the sixth and final season, the show follows the lives of the floor staff at a big-box retailer, Cloud 9, during the pandemic. What’s especially brilliant about this show is that it manages to deftly address real world issues without disappearing up its own woke-hole. And it is also “gloriously, hilariously, gleefully stupid,” writes Andrew P Street.

After Story, a new novel by Larissa Behrendt, sees an Indigenous mother and daughter on a literary tour of England. Behrendt’s lens is ostensibly focused on “British” culture, but parallel histories emerge in the novel’s seamless cuts between past and present: stories forgotten, repressed or actively erased from two women’s past, and their country’s. In honouring English history’s depth, Behrendt asks, sharply, why Indigenous Australia should be expected to just “move on”, writes Imogen Dewey.

Increasing bushfires, floods and rising temperatures around the world make action on the climate crisis even more urgent, but Australia remains at a standstill. Guardian Australia editor Lenore Taylor and head of news Mike Ticher discuss Australia’s laggard approach to climate change, and why it’s important not to lose hope in the face of climate disaster. 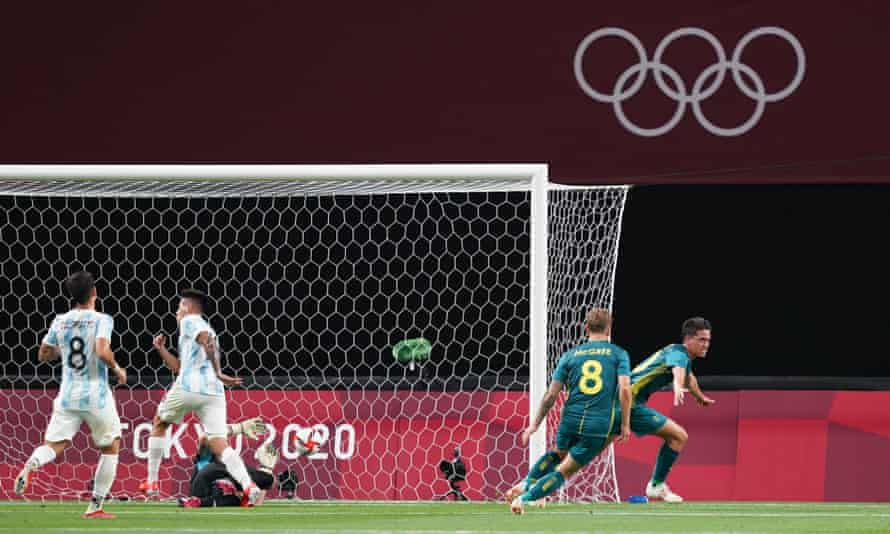 The Olyroos seized the top spot in Group C at the Tokyo Olympics men’s football with a 2-0 victory over Argentina. Australia will face Spain on Sunday.

The nine-day Olympic swimming schedule, which kicks off with the first heats on Saturday evening, is set to be dominated by the rivalry between swimming powerhouses Australia and the United States. The Americans have been dominant in the pool for the past decade. But on the eve of the Tokyo meet, there is a feeling on the pool deck that it may be the Australian Dolphins’ time to shine.

Ahead of today’s national cabinet meeting, the federal government is considering an extension to its billion-dollar aviation bailout, The West Australian reports. Australia has lost more than 100,000 foreign students in the past financial year at a cost of nearly $6bn to the economy, according to new federal government data ($) seen by The Australian. And ABC’s 7.30 has revealed that $4.6bn in jobkeeper payments went to businesses that increased their turnover at the height of the pandemic last year.

The Liberal National Party’s annual convention kicks off in Brisbane.

A Sydney man who was arrested and accused of acting as an economic agent for North Korea in 2017 is due to be sentenced.