My husband finished his album from hospital. His death taught me how to live | Australian books

In May 2015, I was at the end of a long string of bad luck. In the years prior, I had fallen out with my mother, been fired from my job and separated from my husband, Adrian. I was living alone in an apartment above a cafe and taking my writing seriously, something I’d planned to do and never done. Adrian and I were navigating life post-marriage, slowly unwinding all the ways our existences were wound together, figuring out how to be friends instead of family.

We never got the chance to figure it out. We were still in the habit of talking every day when Adrian was diagnosed with stage-four oesophageal cancer. It was the week of his 30th birthday.

What followed next was the unthinkable: hospital stays, chemotherapy, brain surgery and a drug trial. What was even more unthinkable to me was how he thrived. Within 48 hours of his diagnosis, Adrian faced down his mortality. What would he do if he only got one good year? Record a full-length album. Tour if he could. But the album – that sacred documentation of his life – that was what he’d focus on. It would be called Time is Golden, because wasn’t it?

I could find his hospital room by following the sweet sound of his guitar and, if I was lucky, his voice.

If I were Adrian, I would have done the same thing I did after his diagnosis: hide underneath the covers of my bed and wait. I did not write. The only reason I turned on my computer was to stream Dawson’s Creek reruns until I could fall asleep. By contrast, Adrian asked for his guitar to be brought to the hospital and finished one of the last songs on the album. I could find his hospital room by following the sweet sound of his guitar and, if I was lucky, his voice. I asked him once if the songs he wrote were about me. He said they were inspired by me. I knew what he meant. The songs were about him.

After Adrian’s first round of chemo, he shaved off his hair and bought a black felt cowboy hat. Then there were two versions of him: Adrian Slattery the patient, and Adrian Slattery the artist. The first cycle of chemotherapy successfully shrank the cancer. During his following period of health, Adrian tracked the album and played sold-out gigs. He was performing better than he ever had before. He performed like someone who had – well – nothing to lose.

I wish I could say I was inspired by his resilience to work myself, but I wrote nothing in this time except for detailed instructions on how to turn myself into a Filet-O-Fish. I imagined myself being skinned, butterflied, crumbed and deep-fried. I imagined myself dead.

After Christmas, Adrian had a seizure that put him back into hospital. The cancer had spread to his brain. He would need surgery. On New Year’s Day, Adrian and his band, Big Smoke, were meant to play at a festival. He bargained with the doctors: the surgery could wait until after the show. They agreed.

Adrian and I spent New Year’s Eve in his hospital room. The nurses let me stay past visiting hours until 11pm; we pretended it was midnight and toasted in 2016 with apple cider in coloured plastic flutes. We both wished for the same thing that night. We hoped that one day people would hear his music. We both knew that he might not live to see another year.

We did not know what was in store for me that upcoming year and we did not discuss it. I had something that Adrian did not have – time, golden time. It would only be after his death that I would figure out that writing would be my way out too. Right then, all I knew was that I had to get through one day and then the next. I had to show up at the hospital when Adrian needed me and stand in the crowd when he didn’t. And so, on New Year’s Day, I did just that: I showed up and stood in the crowd.

He had shown me what mattered: making art, making meaning and, ultimately, moving on

It was the performance of a lifetime.

When you think of a young man dying, you might not think of a person on a stage, in front of a crowd of thousands, wearing both his festival wristband and his hospital admission one. But I do. When I think of someone dying, I think of what it means to light up as brightly as Adrian did that day. “Illness becomes me,” Adrian said once. And it was true. It did.

Adrian died in May 2016, just before his 31st birthday. I wrote in my notes that he had it easy because he did not have to deal with what came after his death. Hadn’t I helped him navigate what came next, and hadn’t he left me alone to figure it out myself? 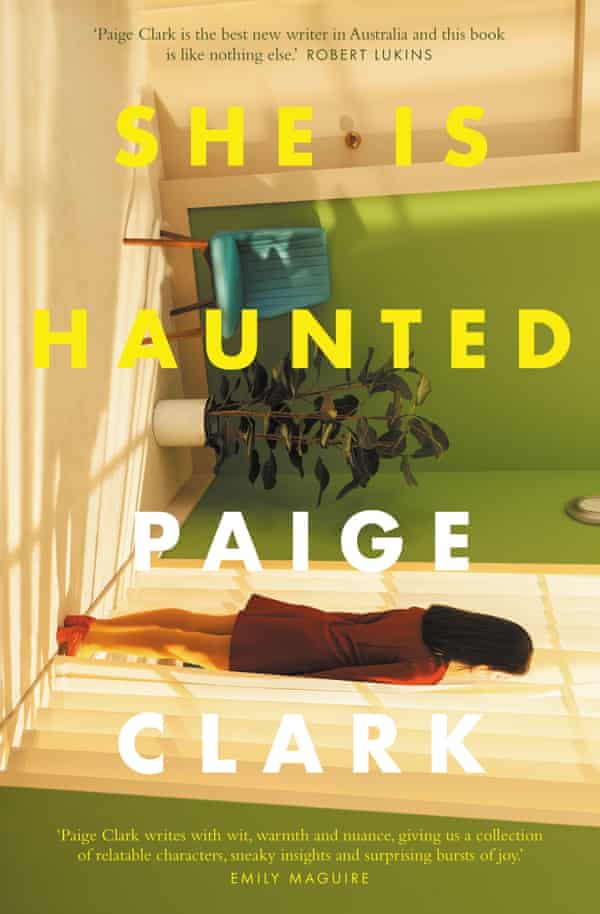 She is Haunted, by Paige Clark, is out now. Photograph: Allen and Unwin

He hadn’t, because he had shown me what mattered: making art, making meaning and, ultimately, moving on past the things we can never even hope to overcome. He had done it himself, and I could do it too. So, in my tiny apartment above the cafe, I wrote. The music from the shop bled in through the walls. Sometimes, they played Adrian’s songs. But it didn’t matter what was playing; it mattered that I worked. My book, She Is Haunted, started to take shape, and I began to understand what it was like to have that laser focus, that ambition that Adrian had in his last year. I needed a reason to live.

The first story I finished after he died was called Times I’ve Wanted to Be You. In the story, a widow attempts to turn into her husband so she does not have to grieve. The truth of this story is not that I wanted to be Adrian in his death, but that I wanted to be him in his life. That day I picked him up in the hospital to take him to the festival, hat on, sleeves rolled up, guitar case in his hand? I have never to this day seen a person more alive.

Is She Is Haunted about Adrian? It is inspired by him, but this book is about me. It is about all the ways I learned how to exist.

Paige Clark’s collection of short stories, She Is Haunted, is out now through Allen and Unwin