There are few among us who can claim to be mononymous – instantly recognisable by only one name. That honour is reserved for the likes of Beyoncé, Kylie, Prince, Oprah, Rhianna and, of course, our very own Gladys.

While the others in that list may have earned their mononymity through sheer star power, Gladys owes hers to the Australian tradition of refusing to bother to learn an “ethnic” name. But Gladys does have a certain star quality – even if confined to the New South Wales political firmament – and like these stars is the subject of a bit of the ole fan art.

For those in search of a gallery of glorious Gladyses drawn by her devotees, @gladysfanart on Instagram is the place to go. For those who can’t be bothered but would still like to see some of the public’s portraiture of the premier, here are 10 of my faves:

First, it’s Jack Stolzenberg with some straight-up stanning. Strong black linework (I’d say an Artline 0.6) on lined notepaper. Looks like it was drawn in the back of a school exercise book. Could have had a few more love hearts around her face but otherwise a teenage classic.

Lydia Burt also goes for lined paper – but with a biro. On a personal note, I’m loving seeing people draw with whatever materials are available to them. It’s FAN art not FINE art, and anyway, everyone should embrace creativity no matter their level of talent.

That said, I’m not sure if the vertical protuberance is part of the lectern or a depiction of the Trouser Snake of Patriarchy about to bare its metaphorical fangs. Look out, Gladys!

All great works of art have an element of mystery to them and Jess Roskalita’s work (crayon on paper) is no exception. What is Gladys doing? Wiping bushfire ash from her eye? Hiding tears of relief that everyone seems to have forgotten that dodgy Daryl Maguire business? Or is Scott Morrison just out of frame and she’s pressing her eyes to stop them from rolling too far back in her head? We will never know.

Speaking of mystery, this Digglet work (felt-tip pen on paper) is full of it. I love the strong style and clean line work, but what really intrigues me are the eyes. What has Gladys seen just to the viewer’s left? Grim stats on Covid? John Barilaro shooting his mouth off again? A cloud of Mark Latham brain fart? Again, we shall never know. 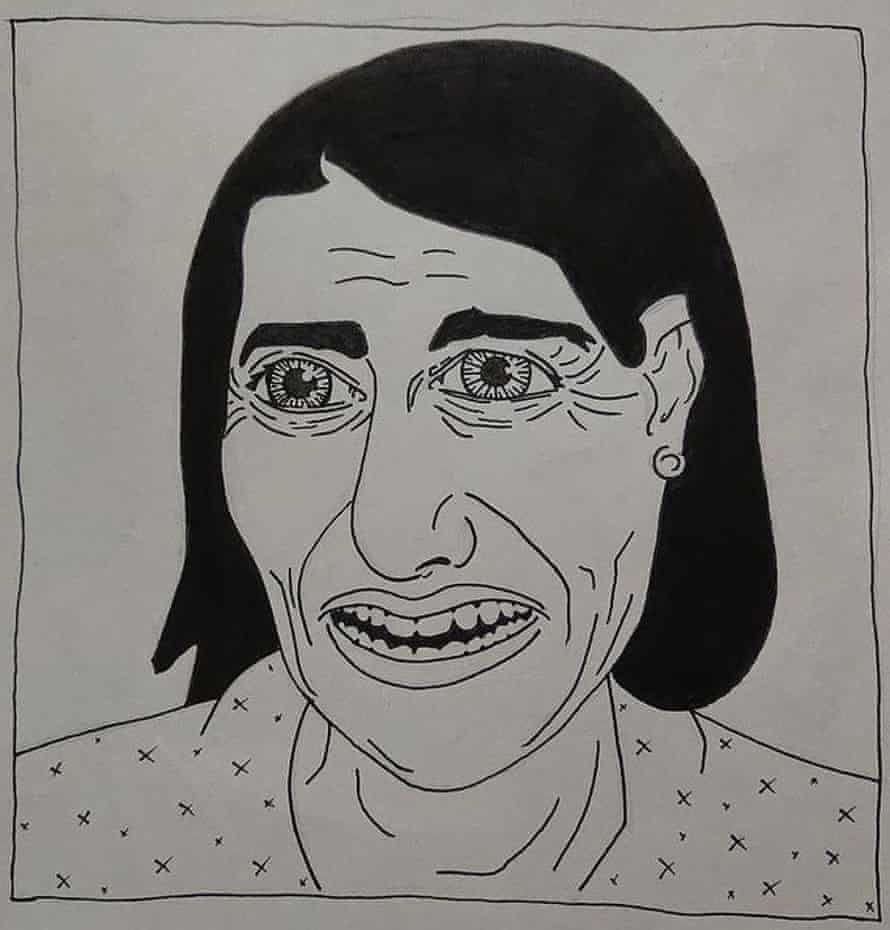 Another Gladys-related mystery that has plagued the people of NSW is what the hell she ever saw in Maguire? I, for one, am happy to never find out – but James Crovid (biro on notepaper) is confident Daz was the Love of Her Life. Don’t be too sure, James!

Isabelle Littlewood (pencil on paper) has really captured a particular Gladys expression. I can imagine it as part of a poster for a romcom called Going Viral, with Gladys as a long-suffering medical scientist trying to rein in her hapless blowhard of a boyfriend (Morrison) while failing to prevent a second wave of infection …

… and Maryanne (pencil on paper) has the face she would pull at the end.

Not sure about the neck thing but Avani jpeg‘s work (digital illustration) is close to my heart. As someone with an oft-mispronounced “ethnic” surname, I get that some names can seem difficult, but FFS give it a go and then learn how to say it properly! It’s not hard! Show some respect! Also, don’t smoke.

While Gladys may have hit a snag in the real world, @Shany.b (digital illustration) shows her eating one. It’s clearly a democracy sausage and who doesn’t love democracy – other than authoritarians, the US Republican party and a significant percentage of millennials. She’s eating it with relish (or at least a fair suck of the sauce bottle) and her slightly cynical squint shows she knows just how that sausage is made.

And finally, @imo_water_carver (coloured texta on paper) shows how quickly things change. Seems like only weeks ago that Gladys was being hailed as the saviour of the nation, her standards gold and, in this work, her hair. What this quite charming picture lacks in resemblance to the subject it makes up for as a testament to times gone by and the fact that fandom is truly blind.