We’re going to wrap things up for the evening. Here are the day’s key events:

We’ll see you back here tomorrow.

The Western NSW Local Health District has posted on its Facebook page that it has been notified of cases that travelled to Molong, near Orange in the state’s central west, on 16 July.


No venues of concern are currently identified and contacts of the cases are being tested while in isolation. Urgent investigations are underway and contact tracing is continuing.

As a precautionary measure, a drive-through (testing) clinic will be established in Molong and capacity in Orange and Bathurst will be increased.


National Cabinet discussed the outbreak in Greater Sydney and the additional measures introduced by the New South Wales Government to stop the spread of the virus. National Cabinet has agreed to a suppression strategy for COVID-19 with the goal of no community transmission.

All leaders expressed their full support for NSW to get on top of the current outbreak. National Cabinet noted the Commonwealth’s extension of the COVID-19 Disaster Payment support for Greater Sydney and Victoria, based on Commonwealth hotspot declarations.


National Cabinet received an update from the Secretary of the Department of Prime Minister and Cabinet on the four step plan to reopening and the progress of the Covid-19 Risk Analysis and Response Taskforce report and the Doherty modelling for the National Plan to transition Australia’s National Covid Response.

All leaders reiterated the importance of Australians, especially those in vulnerable groups, to get a COVID-19 vaccination.

National Cabinet agreed to meet next on Friday, 23 July 2021.

National Cabinet noted the new arrangement for business support payments in the event of a significant lockdown of greater than 14 days.

NSW Health has updated its list of exposure sites.

New venues of concern for potential close contacts are in suburbs including Emu Plains, Liverpool and Hurstville.

Other exposure sites are in areas including Fairfield, Bondi Junction, Coogee and Lakemba.

There has been an update to a dispute we reported earlier today, between 200 cleaners at Westmead hospital and NSW Health, where the workers were claiming they were not receiving adequate PPE at the hospital in Sydney’s west.

The cleaners had been refusing to enter the hospital’s Covid ward claiming they were denied booties and hairnets, as well as delays to having their masks fitted properly and being denied the ability to shower before leaving the hospital to avoid spreading Covid to their families and the community.

At the NSW Covid press conference today, health minister Brad Hazzard said he had held meetings with the Health Services Union about the dispute, and instructed NSW Health “to be as generous” as possible.

NSW Health has now agreed to supply the cleaners with the PPE and showering facilities they had been demanding, with the workers agreeing to resume their duties late on Friday afternoon.

Gerard Hayes, NSW secretary of the HSU, welcomed the decision, saying “common sense has prevailed and we thank”.

The dispute followed the Covid diagnosis of a vaccinated nurse on Thursday.

Tasmania has ordered recent arrivals from Victoria to wear a mask in public settings and avoid crowds.

The directive covers people who have been in Victoria since July 8 and comes into force from midnight on Friday.

Tasmanian premier Peter Gutwein said the order was made out of an “abundance of caution”.

“What we’re seeing in Victoria at the moment is a very rapid escalation in the number of exposure sites,” he told reporters.

Tasmania had already put up a hard border with Victoria from midnight on Thursday, which means only essential travellers are allowed to enter.

Mr Gutwein said about 15,000 people had arrived in Tasmania from Victoria since 8 July.

Some breaking environmental news this afternoon.

Santos and Murphy Oil have abandoned their plans to drill for oil in the Great Australian Bight.

BP, Chevron and the Norwegian oil giant Equinor had all already scrapped their drilling plans.

Santos and Murphy Oil’s exit means Bight Petroleum is the only company that still intends to drill in the Bight, however its most recent plans were knocked back by the regulator earlier this year.

“This is an incredible win for all of those who relentlessly campaigned for years to protect the Great Australian Bight from offshore drilling,” said David Ritter, the chief executive of Greenpeace Australia Pacific.

“The only way to protect coastal communities and the Great Australian Bight’s unique marine life is to rule out drilling permanently.” 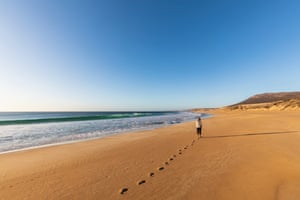 Santos and Murphy Oil have joined BP, Chevron and Equinor in abandoning plans to drill for oil in the Great Australian Bight in South Australia. Photograph: Getty Images

The eligibility criteria states that “sole traders may apply for Covid-19 disaster payments if you are unable to operate your business at home”.

We have sought explicit clarity from minister Bridget McKenzie’s office. 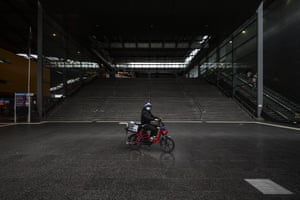 The Australian Council of Social Services has criticised the federal government for making people who receive some form of welfare payment ineligible for Covid disaster relief, saying the prime minister Scott Morrison lives in “a different world” to that of people who are on income support.

“We know many people have accumulated a lot of debt, and many people’s financial circumstances are already seriously dire. Now I’ve heard the prime minister say this will be fine because people have built up a lot of savings on their balance sheet. I think this reflects the world that the prime minister lives in and the difference between that world and the world of people on low incomes in Australia.

“It’s certainly true that people with significant wealth, and who haven’t lost their jobs — secure jobs — have, in many cases, got savings. Many of them have used low interest loans to snap up properties, and their wealth is increasing, but that’s one world. The other world is the world we say that this government has completely ignored now, which is people on the very lowest incomes.”

Goldie said many people who receive income support payments rely on some form of casual work to pay the bills.

“They rely on that work to feed themselves, and to cover their bills because the social security payment or the Youth Allowance or job seeker is a poverty payment.”

The UN’s science and culture agency has issued another strong rebuke of the Australian government’s claims it should have held a visit to the Great Barrier Reef before recommending it be listed next week as a world heritage site in danger.

Dr Fanny Douvere, a senior Paris-based Unesco official and head of its marine program, has told the ABC the Australian government’s intense lobbying over procedure was distracting the world from a reality that one of the world’s most emblematic natural wonders was in danger.

The 21-country world heritage committee will start a scheduled 15 days of deliberations tonight on reports from 258 sites around the world and proposals for 44 new entrants as world heritage places.

Unesco has also recommended the committee scrub two sites off their world heritage status – Tanzania’s Selous game reserve and Liverpool’s maritime city front in the UK – and seven sites, including the Great Barrier Reef, be placed on the “in danger” list.

As part of Australia’s lobbying effort, the environment minister Sussan Ley has been in Europe since Monday while reef envoy Warren Entsch took ambassadors from 14 countries on to the reef yesterday.

Ley, Entsch and Australia’s permanent ambassador to Unesco, Mega Anderson, have all accused Unesco of breaking rules by not carrying out a site visit before making their recommendation.

Douvere repeated her defence, first made to the Guardian more than two weeks ago, that all proper processes had been followed and a site visit was neither necessary nor part of the world heritage rules.

“This is a reef system that’s extremely well documented and we are talking about climate change and water quality and they are issues that are very well researched and documented.

“The constant concentration on procedure also extracts us from the reality of what we are dealing with here, with one of the most emblematic coral reef systems in the world that is in danger, with very clear evidence that’s reported in official scientific documents provided by the government of Australia.” 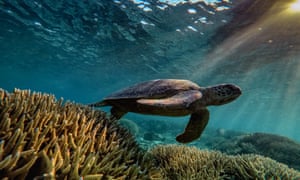