Sky News Australia has quietly deleted at least 31 videos that question the public health response to Covid-19 or promote unproven treatments as the broadcaster prepares for its chief executive, Paul Whittaker, to appear at a Senate inquiry on Friday, Guardian Australia can reveal.

Sky News will face the media diversity inquiry after the broadcaster was suspended from Youtube for seven days for posting 21 videos that violated the platform’s Covid medical misinformation policies.

Whittaker, presenter Sharri Markson and the Sky News digital editor, Jack Houghton, have all criticised YouTube for deleting the videos but Sky has given no explanation for scrubbing its own skynews.com.au website of what could be perceived as contentious content.

Among Sky News Australia’s deleted videos is a segment by Alan Jones who calls Daniel Andrews’ mask mandate a ‘dreamt up draconian measure’.

The disappearing videos include Alan Jones saying Victorian premier Daniel Andrews is “wrong” on face masks: “that bloke is in need of medication”; and a Jones interview with a Canadian pathologist who claimed Covid was the “greatest hoax ever perpetrated on an unsuspecting public”.

After the interview Jones said: “well there you are, as I have said all along, there is no epidemiological justification for any of this. Lockdowns, face masks, social distancing”.

Markson, whose content has not been targeted, called the YouTube ban “the most extreme cancellation of free speech imaginable” last week and Houghton said it was “tech giant censorship” when the popular channel was barred from adding any new videos up until Thursday evening.

YouTube said: “We have clear and established Covid-19 medical misinformation policies based on local and global health authority guidance, to prevent the spread of Covid-19 misinformation that could cause real-world harm.”

As a result of Sky removing the videos they have disappeared from all News Corp newspaper websites and Facebook pages where they were hosted.

In another removed video Andrew Bolt says hydroxychloroquine and ivermectin should not be banned: “Listen I don’t know if these drugs work, but I do not see a good reason to ban or restrict them.”

Outsiders co-host Rowan Dean has also spoken about the unproven treatments, going so far as to say governments are “directly responsible for the deaths of Australians” whose lives could have been saved by hydroxychloroquine and ivermectin.

In another video which has been taken down Jones says Covid-19 is not a “unique disease” and the public is being lied to by authorities.

“It does not appear to have a noticeably higher mortality rate than the so-called common cold,” Jones said in October last year. “Yet here we are with lockdowns everywhere. “I won’t be letting up on this because I am sick and tired of the nation being told rubbish. Or should that word be lies? “The point is, none of us are trusted. Governments are determining what we do about our health. And the consequences may be damaging indeed.

“Can some of these politicians do some research of some scholarship, bury the alarmism, bring on the truth.”

The former prime minister Kevin Rudd said Sky News should have explained to viewers why the content had been removed, and apologised if it was wrong.

“This scrubbing of Murdoch’s websites proves the exact opposite. Sky News’s claims have been irresponsible, indefensible and dangerous – and they know it.”

Rudd, who will give evidence to the inquiry on Friday, said Sky should explain the removal.

“When a serious broadcaster retracts a story, they explain their reasons and issue an apology,” he said.

According to the health department there is currently insufficient evidence to support the safe and effective use of ivermectin and the use of hydroxychloroquine for the treatment of Covid-19 is not recommended outside of randomised trials with appropriate ethical approval.

The vast majority of the 31 videos contain positive comments about the use of ivermectin and hydroxychloroquine for the treatment of Covid-19. 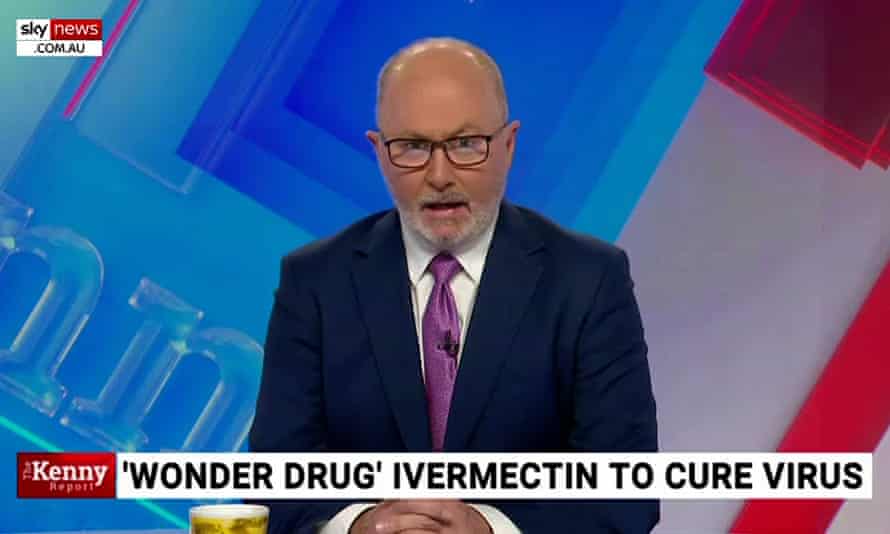 Earlier in the year Jones was forced to publish a correction to his August 2020 editorial railing against Covid-19 restrictions in Victoria after the Australian Communications and Media Authority found he had “misrepresented the research” on the effectiveness of masks and lockdowns. However, Acma has been silent on the move by YouTube against medical misinformation and will face questions from committee members over its role.

How to get the latest news from Guardian Australia

Greens senator Sarah Hanson-Young, the chair of the senate inquiry into media diversity, has said the “obvious question is if the spread of misinformation isn’t allowed on the internet why is it on television broadcasts”.

According to reports in News Corp papers on Monday, Whittaker has written to YouTube to question its editorial policies concerning Covid-19, saying they are “internally inconsistent and incapable of compliance”.

Sky News did not respond to a request for comment.

The list of the 31 videos which have been removed: