Victoria has recorded its highest number of new daily Covid-19 cases in 10 months, with 22 new cases reported on Wednesday.

While it is the highest number of new cases since late 2020, the state’s health minister, Martin Foley, expressed optimism that Victoria was getting ahead of the outbreak due to the large number of contacts isolating and lockdown having an impact.

Sixteen of the 22 cases were in quarantine for their entire infectious period, and the remaining six had very few exposure sites due to the lockdown in Victoria – now in its sixth day.

All 22 cases were linked to current outbreaks and it takes the total number of cases associated with the outbreak to 107 in the past nine days. Victoria set a new state record with 57,519 tests returned in the previous 24 hours.

“If Victoria wasn’t managing those secondary close contacts as tightly as we are now, the advice that we have is that this virus would have got beyond us already. It has not,” Foley said.

The health minister said he was increasingly confident Victoria was on top of the outbreak.

“We will get ahead of this through the public health measure, through the support of the 28,000 people, both primary and secondary contacts who are isolating and the millions of Victorian who are following the rules,” he said. “We will get on top of this and we will get back to a Covid-normal life as soon as we possibly can.”

Victoria’s chief health officer, Prof Brett Sutton, noted people might be alarmed at 22 new cases, but said 16 isolating for their entire infectious period was “a very good sign” and he expected that to improve even more in the next few days.

“I expect it to be improving over time. The may even be that within a couple of days, we don’t see anyone who has been out in the community for any of the infectious period,” he said.

Five people with Covid in Victoria are now in hospital, and one from Barwon Heads has been moved into intensive care.

The state’s industry support minister, Martin Pakula, also announced a further $282.5m in cash grants for businesses affected by Victoria’s latest lockdown, bringing the total support to $484m for this lockdown, and close to $1bn for the last two lockdowns.

In the first two days of this week, 86,000 businesses were paid either $3,000 through the licensed hospitality venue fund, or $2,000 through the Business Cost Assistance Program.

The support announced on Wednesday will be an automatic top-up of $4,200 for hospitality, or $2,800 for business cost assistance.

Businesses not registered for GST and with turnovers under $75,000 should still apply for the business support, but Pakula said those businesses could also apply for the federal Covid disaster payments of $600 a week if they have lost 20 hours or more, or $375 for between eight and 20 hours lost.

Grants of up to $7,000 for live performance support will be available, and there will be $2,000 grants available for community sporting clubs.

Pakula said he was hearing from hundreds of businesses struggling, but said that reinforced the decision to get the current outbreak under control as quickly as possible.

“It’s not possible for any of those businesses to get back to anything equating normal operations when there are huge numbers of cases circulating in the community. So, as difficult as it is, the alternative would be much, much worse.”

On its first day of a seven-day lockdown, South Australia recorded one new case of Covid-19, taking the total associated with the outbreak to six cases.

The woman in her 20s is a staff member at the Greek on Halifax restaurant. There are now 52 exposure sites in South Australia.

The premier, Steven Marshall, said the state had “one chance” to stop the outbreak in its tracks and prevent an extended lockdown, and the government would be looking to expand its testing capacity.

The state has also announced a $100m business support package to compensate businesses forced to close during the lockdown. 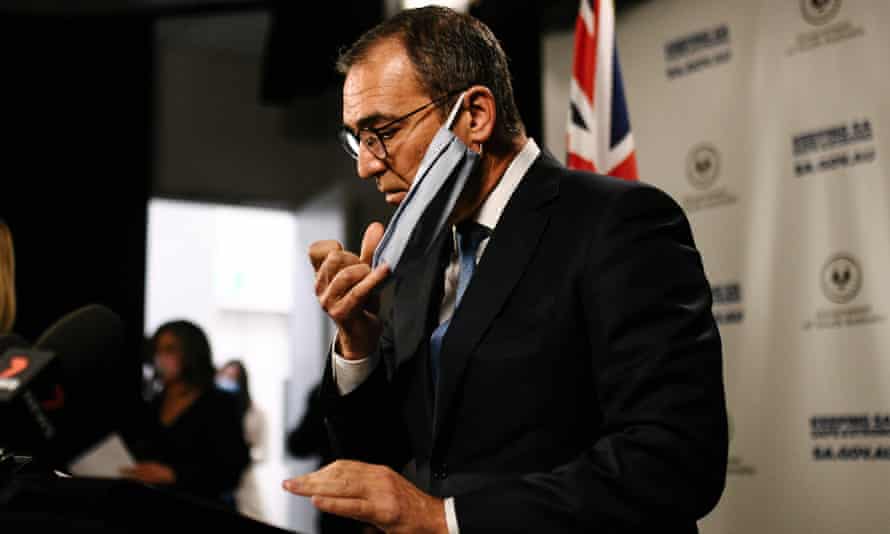 South Australia premier Steven Marshall on Wednesday: ‘We don’t want to have [these restrictions] in place one day longer than we need to.’ Photograph: Morgan Sette/AAP

Emergency cash grants of up to $3,000 will be available for small and medium businesses with turnover of over $75,000 a year and can demonstrate a 30% reduction in turnover over seven days from 20 July.

Sole traders will also be eligible for $1,000 grants, and it is estimated up to 50,000 businesses will be eligible.

The SA government will also pay between $375 and $600 to employees in regional South Australia who otherwise would not qualify for the federal government’s Covid disaster payment because they live outside the commonwealth designated hotspots.